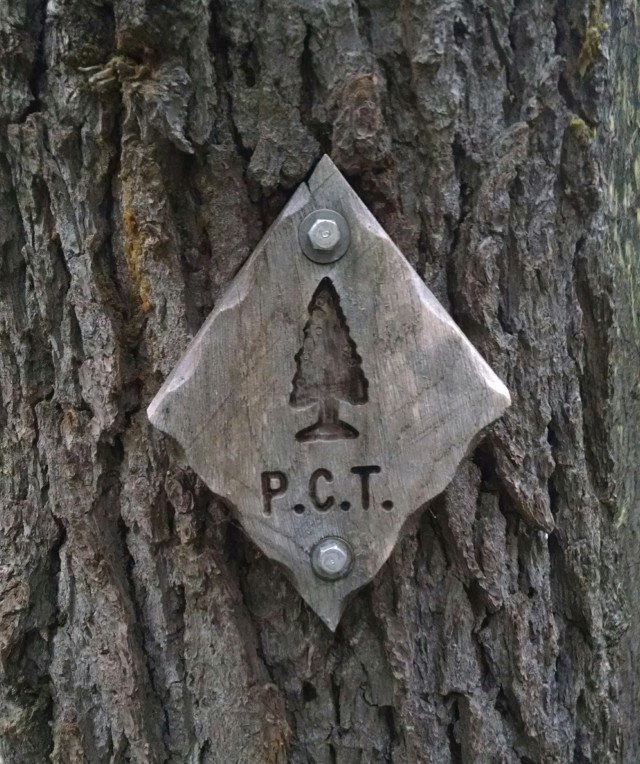 We started climbing up to Goat Rock early before sunrise, which required enduring the cold chill. Several SOBO the past few days have said, “Wait to you get to Goat Rock!”. We are now anticipating an “Oh, Wow!” moment.

After about an hour we stopped to change out our jackets, as the climb was hearty enough that we were far from cold, and to “water the grass”.  While “watering”, I found a Spot. A Spot is a GPS device similar to our Delorme. Whom ever lost it must be really upset.  Unfortunately there was no identifying information as to the owner attached or etched into the device.  A call to the Spot company with the serial number might be a way to find the owner, but for now we’ll just have to carry it. 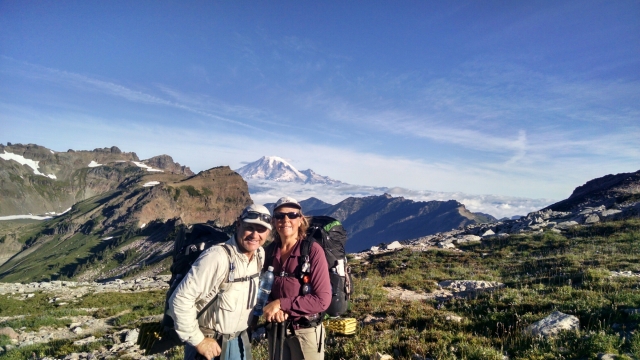 As we crest the ridge we get our first real view of Mt. Rainer.  It’s incredible!  Between us and the mountain is maybe 40 or 50 miles, but it looks a lot closer.

It is covered with snow, towering into the sky, and oh wow! amazing. The trail traversed along a very steep mountain face of slip shale rock, which I enjoy so much.

But wait, there’s more…we also traverse through frozen icy snow…another fave. Without our trekking poles it would have been very difficult to safely cross this slippery junction, and near impossible for me to make it across.  We watched as another hiker, just ahead of us, without poles finally just sat down on his butt and slid across the snow by paddling with his hands. A mistake here could result in a fall of a thousand feet. As I’m not great with heights this wasn’t a lot of fun for me.

If that wasn’t enough, the trail eventually turned out onto a ridge. This was no ordinary ridge. This was the ” Knife’s Edge”.  At this point I’m thinking, ‘Ya, right. You’re gonna “love” Goat Rocks.  What’s funny is that we never really remembered any previous blogs describing goat rocks…and not a damn thing about Knifes Edge.  If I had known, I probably would have looked for an alternate route.  Geez. 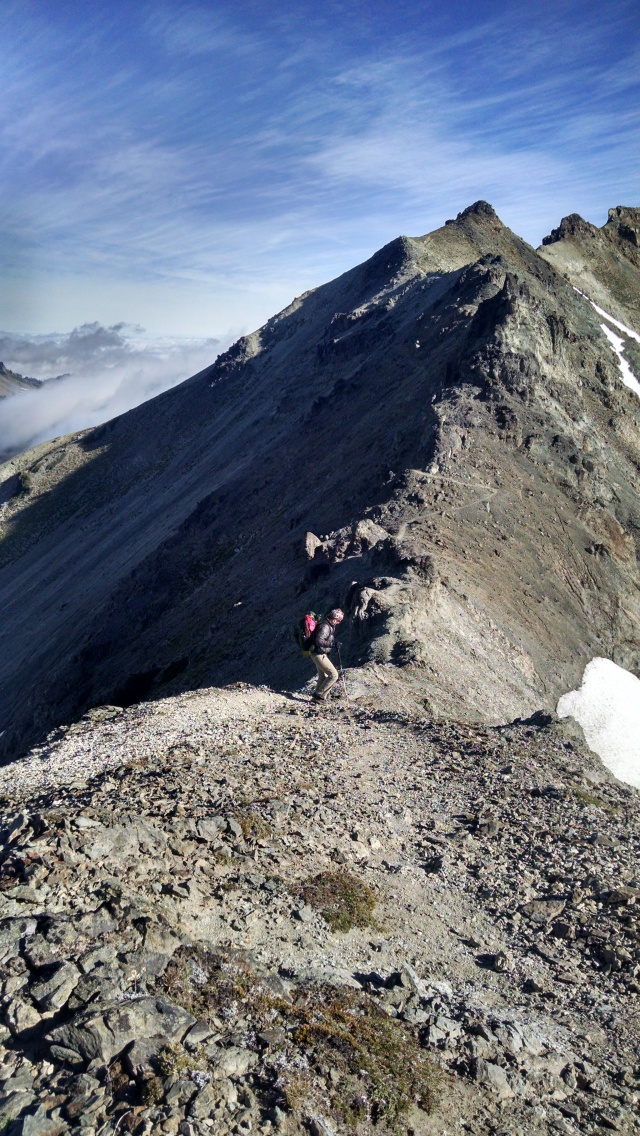 Anyways, this ridge was a very slim single track that went up and down in a VERY STEEP way…on both sides!  Imagine walking the flat railing of the Empire State building…wind and all.  The trail was littered with loose dirt with small marble size rocks mixed in. On either side was a very very steep drop off. I would have preferred to have worn a parachute rather than a backpack while making this crossing.  Thank goodness there was no one immediately behind us, cause it was a slow and deliberate trek.  Heaven forbid if a SOBO had approached, as there was no way I was gonna step aside for uphill traffic! 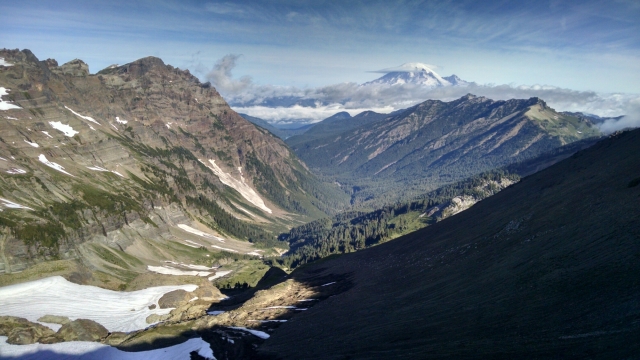 The views, however, were breath taking when I took the time to stop and look around.  Paul of course had no problem, and probably walked with his poles in his right hand and his left hand in his pocket, without a worry in the world, as he often does during downhill jaunts. We had nearly finished crossing the Knife’s Edge, and onto a wider based trail, when a low cloud descended on top of us.

The air turned immediately to freezing and the visibility reduced to 10 yards.  Glad this did not happen whilst on the “edge” so to speak.  We continued to work our way down the trail and below the cloud. We wondered aloud how the hell you would coax a horse into doing that crossing as the PCT is also equestrian trail as well. 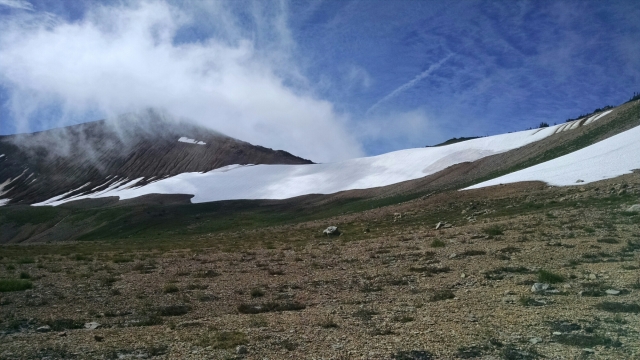 The trail eventually entered a large valley that gave us a view of the Knife’s Edge from below.  Holy shit!  That is a “one and done”, moment. 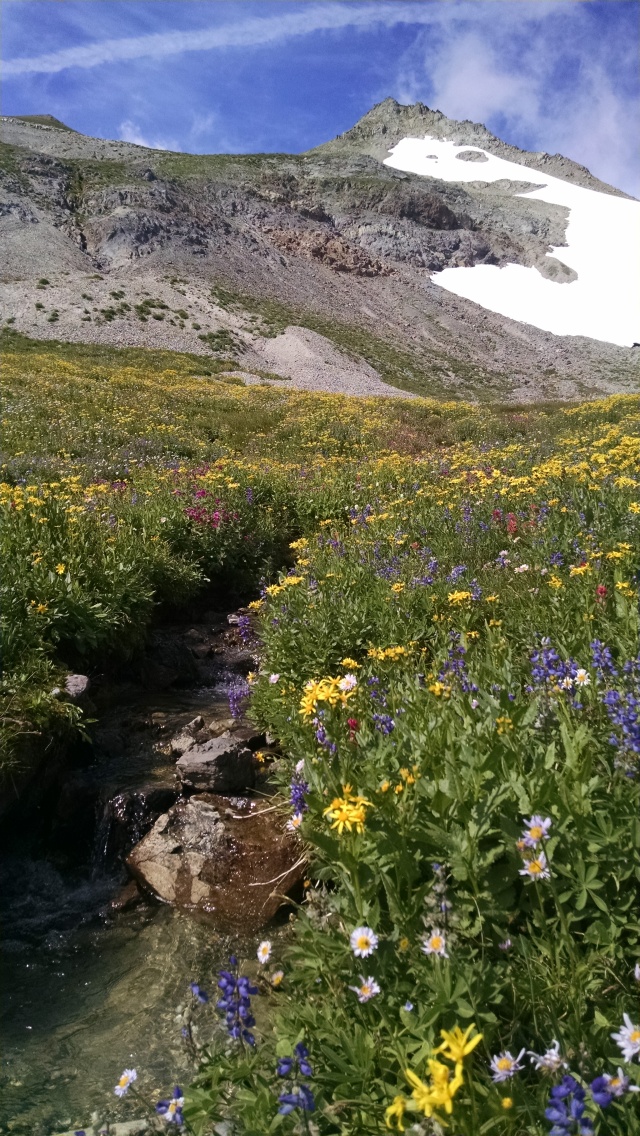 Below we were treated to a potpourri of color fed by snow melt.  We took a break, and sent our hiker friend, Arizona, who had flipped at the town of Chester, a text message. (A flip is hiker jargon for skipping ahead to Canada and heading south.) We had predicted that we would pass each other at White’s Pass, which was our end goal for today. He texted us that he had left White’s Pass this morning and we should look for each around 2 pm. We hadn’t seen Arizona since mile 942, Tuolumne Meadows,  (1400 miles ago) but have kept in contact periodically by texting.  We  happily hiked on with anticipation of our meeting. About 1:30pm we see him coming down the trail and it’s all hugs and back slaps. We spent the next 1 1/2 hours catching up on each others adventures and giving Intel on what’s ahead. While it was a sad good bye, we knew we all had to make miles for the day. The visit with Arizona put us way behind, and we knew we would be hiking in the dark to make it to White’s Pass. About an hour before dark we reached the top of White’s Pass Ski Area. We knew we were close, but the map showed 2 1/2 miles to go. It was a long day and we were both dragging when we saw a paper plate on a tree that said “pop up trail trail magic in parking lot”. Would the trail angels still be there when we arrive? With headlamps on, we reach a dark empty parking lot and see another plate which read “magic across the street “. Crossing our fingers we cross the street and find a few hikers with trail angels, Jerry Can and Chef. Music playing loud, dim lighting and the smell of “medical marijuana” in the air we are treated to a cold beer.

Chef, being a real chef, made us a great Mexican meal that was what we needed after the long trek. While eating we notice a note in the picnic table that read, “lost SPOT…if found please contact Acorn the Elder” and it had phone number.  Ah Ha, we know Acorn.  We will call his number in the morning at White’s Pass.  Now, being the only sober people, we made a quite stealth exit using the darkness for cover. Up the road we found an abandoned dirt road that had a cement barricade blocking any through traffic as a place to camp.