The DC Tourist – Day One

Anytime we fly back east, no matter how you slice it, you lose a day of your life to travel. As eternal optimists we tried as we might to change that with an early, and I mean early (not red eye) flight. Daylight was still upon us when the shadow of our wings crossed the Potomac with the National Mall and the 555 foot tall Washington monument, and the  Jefferson Memorial, currently under renovation/cleaning, out our window, to our left.

What used to seem larger than life was somehow reduced to a monopoly game pieces. We arrived at the Reagan Airport just in time to be caught in the traffic headed to the Washington Nationals ball park for their life or death wild card playoff game against the Brewers, of which we almost were able to attend. The fact that the Nationals won coming from behind in the 8th inning made for a spectacular finish, and not a total loss of a day. The days following, until the 8th, were to be filled with a plethora of “touristy” family activities with our niece and her husband (newly retired) as our guides.  To their kids dismay, they still had to go to school.

Day one began by with catching the Metro into downtown. As luck would have it (thank you Mother Nature), we arrived in DC during a record breaking heat spell, with this day being one of the hottest days (98 degrees) on record since 1941. As a result, any touring would be spent inside as much as possible. Our first stop, the Museum of Natural History, a three story collection exhibits, interpretive and interactive displays that span and “wet” the intellect of ages, of all things aquatic and terrestrial. Most of which having been formed and or existed thousands if not millions of years ago. 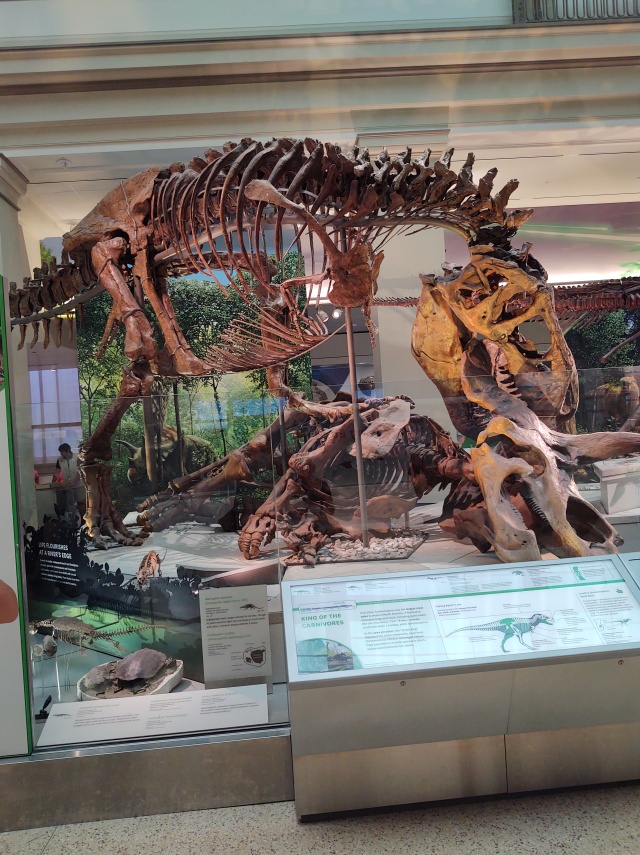 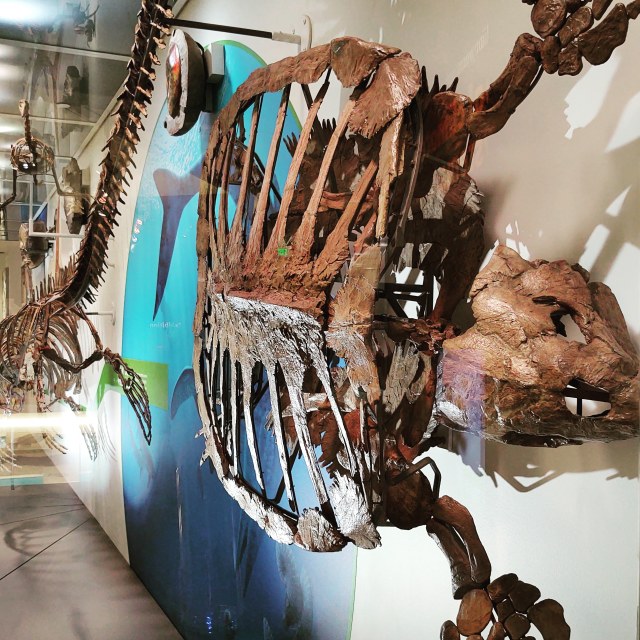 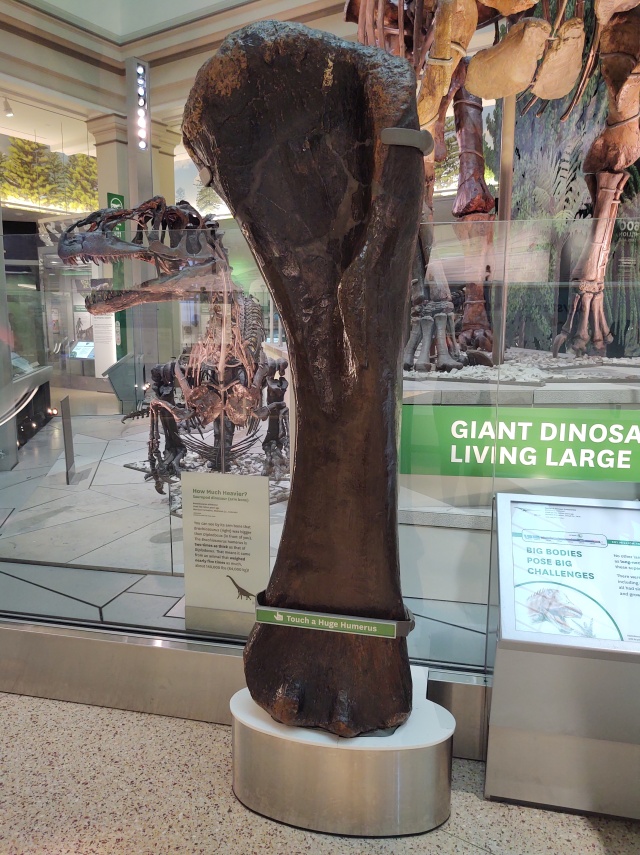 We found some displays more humerus than others…get it? Humerus?  Anyhoo, while their were several other areas within the Natrual History museum, we spent most of our time enthralled with the dinosaur exhibits, fascinated with not only the size of their bones, but more importantly the sharpness of their teeth.  I certainly would not wanted to be an early human, as they obviously, for some time, were NOT top of the food chain, but seemingly part of it.  Having “filled” our heads, it was time to fill our stomachs. And fill them we did with an amazing lunch at the historic Old Ebbitt Grill where the “who’s who” of DC can often be found. Fully satiated, it was time to view DC from a different perspective…The Old Post Office (circa 1899), specifically, its clock tower. 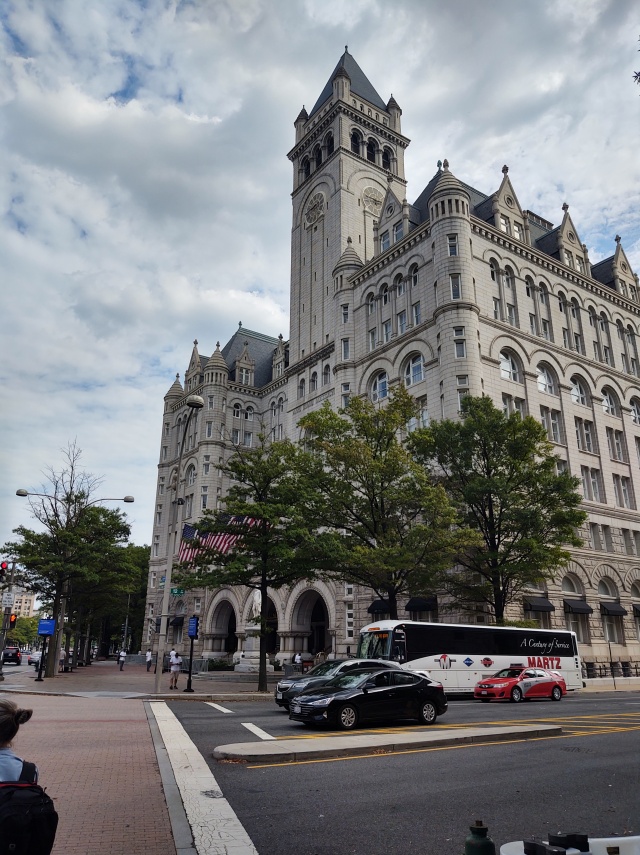 This building, located on 1100 Pennsylvania Ave (between Congress and the White House), operated as DC’s post office till the beginning of WWI and has gone through several renovations and uses to include nearly being demolished in the 70’s to make way for more office buildings. It’s Romanesque Revival style of architecture (1840-1900), a common style for churches and government buildings(1840-1925) with its monochromatic masonry, square towers and semi-circular window and door openings, just didn’t match the Federal Triangle complex it is nestled within and the immediate area’s architecture (Beaux Arts). It survived however, and in 2013 the U.S. General Services agency (GSA), the building’s owner, signed a 60 year lease with DJT Holdings LLC, who then repurposed the building into a 5 star luxury hotel, the Trump International Hotel.

Simply described in one word, Elegance.  The building’s exterior and interior atrium has kept its historical and intricate craftsmanship.  We however, were here to experience DC, and all its architectual glory and design from the clocktower.

If you read the panel above, you will discover how the celebration of “Flag Day” came about.

To access the clock tower, one enters from the “backside” of the hotel, adjacent the Starbucks.  From here you enter double doors, make a left, which leads you to the Trump store and a security guard who makes sure that you don’t have any liquids with you if you are headed to the clocktower.  You make a right and follow a long hallway adorned with very informative interpretive panels about the history surrounding the design of DC.  At the end of the hallway, and a right turn, you are met by a National Park Ranger who inquires from whence we came and directs us into the small elevator that first takes you to the 9th floor, where you can peak into the post office/hotel atrium/lobby-bar and the area where the pulls for the United States Bells of Congress, in which there are 6 varied size bells ( 581lbs – 2953 lbs) housed in the clock tower are located. The Washington Ringing Society is responsible for ringing these bells (a Bi-Centenial gift from England to celebrate the end of the Revolutionary War) at the annual opening of Congress, Federal holidays and other special events.  They practice every Thursday to the tune of over 100db. 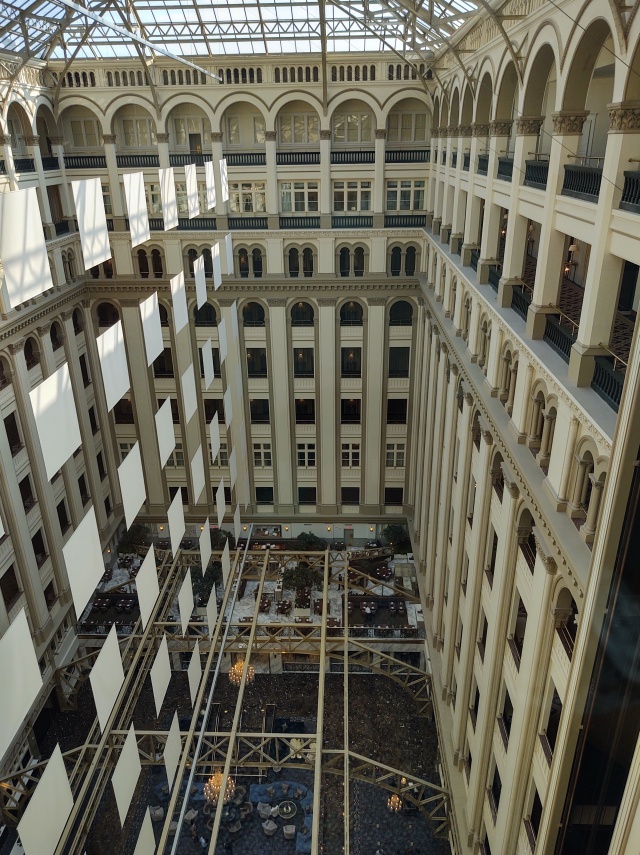 Once you pass the bell pulls, you board another elevator that takes you to the open air clock tower. From here, the 360 degree views are stunning. We lucked out with a near perfect bluebird day. 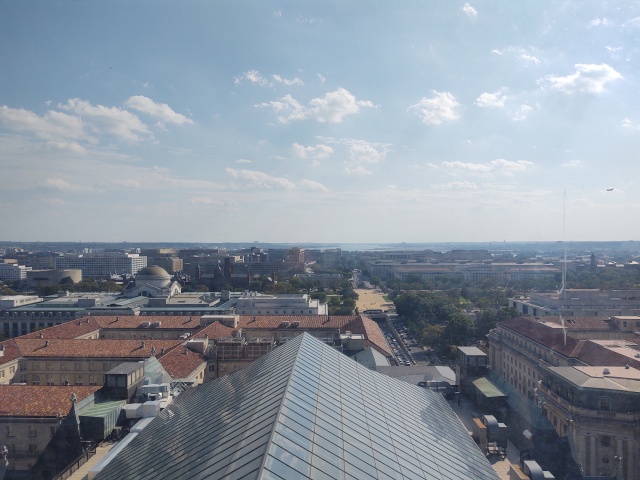 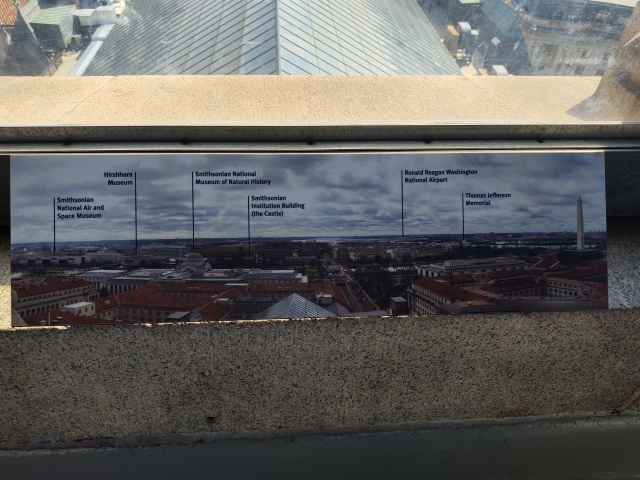 Being able to see buildings from above in their “entirety” makes for a more complete perspective of the enormity and design of the Federal Triangle complex as well as other buildings within easy eyesight.  This 315 ft tall platform above DC, the second tallest in DC, also allowed for significant respite from the record breaking heat wave the city was experiencing.  Eventually we got thirsty and as Paul said, to the chagrin of a secruity guard who happened to ride the elevator down with us from the bell pulls level, “push C for cocktails”.  Considering that the hotel sported two bars (that we could see), we opted to enjoy a cocktail at the smaller and tucked away bar to the left of the lobby (as you enter the hotel), whose backbar facade sports original P.O. Boxes.  A pleasant conversation with the two bartenders tending bar, revealed that one of them hailed from Huntington Beach, where he worked as an ocean lifeguard.  Turns out we knew several of the same people…and the world shrinks, yet again!