Posted on September 1, 2019 by 2 More Miles...
April 8-9, 2019 After leaving Crystal Mountain we weaved our way en route to Crater Lake, Oregon with hopes of visiting for a day or two, and hiking a portion of the rim in snow shoes.  Knowing that we wouldn’t be able to push all the way to Crater Lake, we searched for a place to camp, ideally for free.

Searching on-line for available camping, as we forgot to bring our full size Delorme maps, the Peter Skene Ogden State Scenic Viewpoint came up.  As daylight was waining, this place would have to do.  Lucky for us, in the state of Oregon, per the Oregon DOT (ODOT) , you can “rest” for up to 12 hours in a 24 hour period at their “waysides” (or rest areas). This particular site and iconic viewpoint was named (per the park history) for Peter Skene Ogden (1794-1854), who was an “explorer, fur trapper, Hudson’s Bay Company chief trader and factor. Ogden was the principal explorer of the Snake River country and was among the first to visit the great Salt Lake basin. The city of Ogden, Utah, is named for him.”  Another mystery of how/why a city was named a particular name…solved.  We found it a pleasant stop, with a well maintained lawn with shaded areas, a restroom, and pathway to the uniquely scenic overlook of the Crooked River Gorge, wherein the Crooked River narrowly winds it way through 300 ft tall basalt cliffs.

In the morning we walked over, and onto the Crooked River High Bridge.  Had we stopped here between the months of May-October, we would have been tempted (not likely) to bungee jump off the nearly 100 year old (built in 1926) Crooked River High Bridge that is no longer in use for vehicle traffic.  Central Oregon Bungee Adventures are the concessionaires for this particular “adventure” which boasts to be the “tallest commercial bungee jump in North America”, with a 250ft “dive”. From the Crooked River High Bridge spans the Rex T. Barber Veterans Memorial Bridge (named for Barber who was a WWII flying ace who came from this area) , which unbeknownst to us was also the site of one of Oregon’s “sensational murders”.  These particularly heinous murders of two young children (ages 4 and 6) led to the first woman ever sentenced to death in Oregon. In short, in 1961 Jeannace Jane Freeman, and her partner (Gertrude Nunez) decided that Nunez’s two young children (4 y/o girl and 6 y/o boy) were cramping their style and interfered with their “fun”, so they pitched them off the bridge (whether it was the High Bridge or the Memorial one, is not specified).  People be crazy!  From here, we followed the cliff’s edge, perfectly protected by a basalt block wall, to the Crooked River Railroad Bridge that stands 320 ft tall, having been completed in 1911.

Legs stretched and refreshed from our morning stroll of remarkable sights, we packed up and worked our way to Crater Lake.

As a result of this past season’s snow fall, only one route (the long one – Hwy 97 to Hwy 62 North to Munson Valley Rd) was available to Crater Lake.  It was a scenic and pleasant drive, until…we reached snow level, which was much lower than we expected. 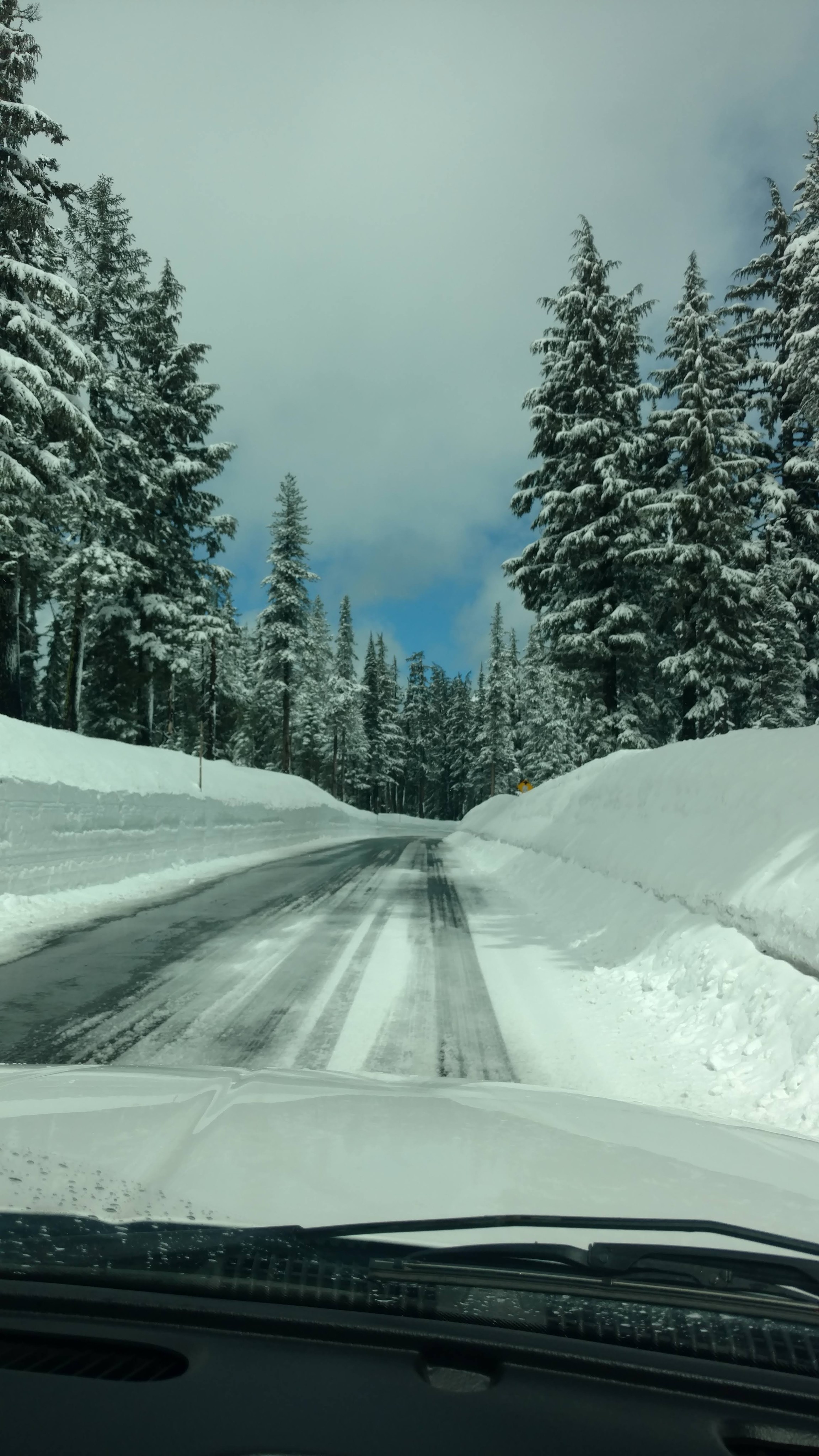 We were completely surprised (don’t know why) to see snow still lining the sides of the now barely two lane roadway.  When we reached the Crater Lake Post office, we found the turn off to the East Rim Village Drive closed, and virtually NO available parking that would allow us to park our truck and go on a snow shoe adventure. 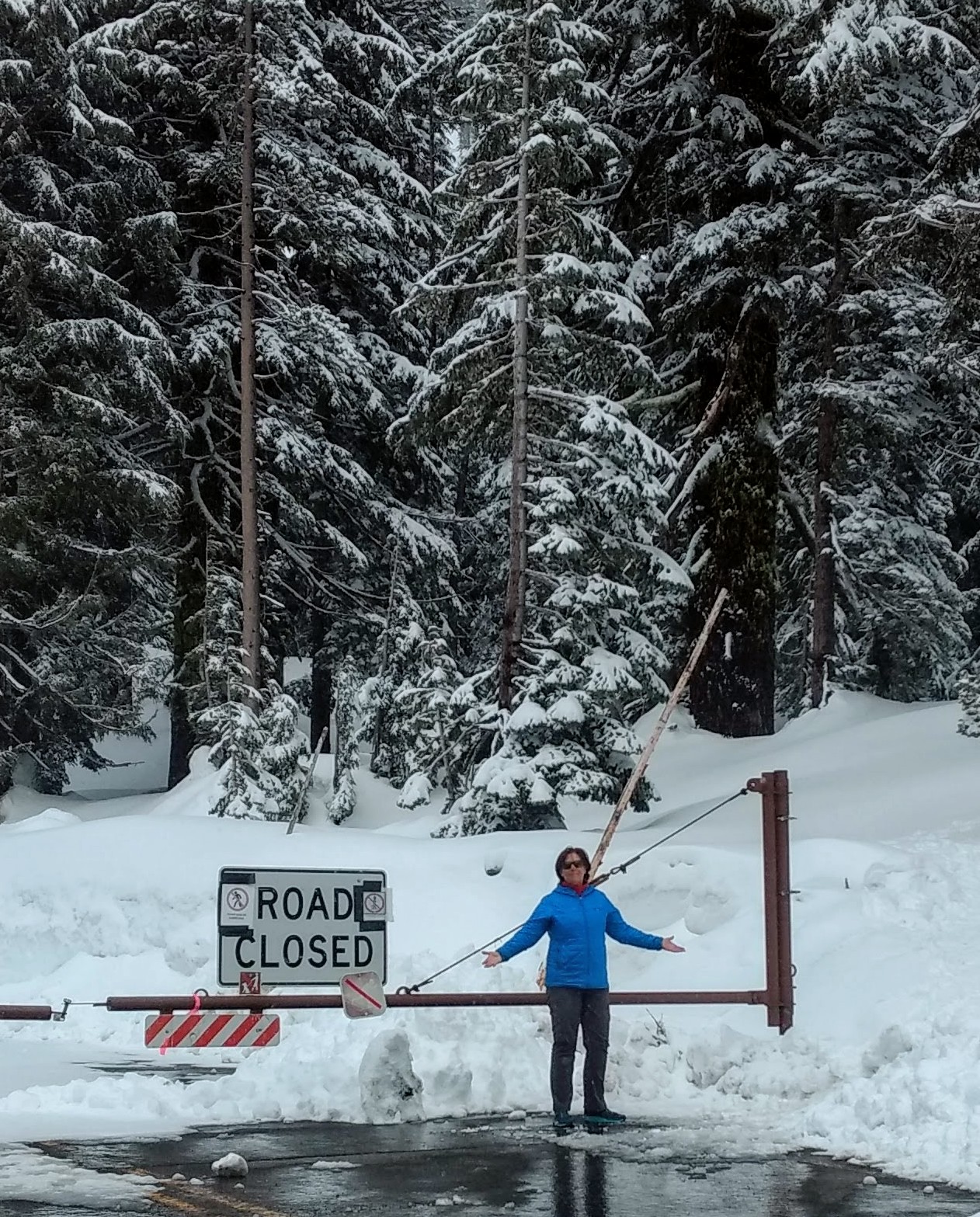 Who thought a Tuesday in April would be so busy…and snowy?  Oh wait, that’s right, it just happened to be Spring Break.  Sometimes being retired, and having no sense of “common” calendar events, throws a wrench into our adventures. Dejected, we hopped back in the truck and retraced our path to the I-97, south toward California.