As we rejoined the I-97 southbound from our failed attempt to peruse Crater Lake National Park in its state of snowy wonder, we considered heading to Squaw Valley to ski for a couple of days, then thought better of it. Instead we decided to take the road less traveled, and do we mean less traveled…especially at dark, to Yosemite National Park.

As we neared Sacramento and were directed by Google Maps to take the I-99 to the 120 through “rush hour” traffic, I devised a plan to take a more scenic and what was supposed to be a less “stressful” route, and certainly a more scenic than following the 99 and going through Stockton. Thus, we turned off the I-5 to the 50 east, to the 16 and then onto the Historic Hwy 49.  It was pleasant, at first, as we travelled through rolling hills with rich green mighty oaks, that reminded me of my youth. Green grass, sprinkled with yellow, purple and white blooms of Spring, along with golden poppies, and purple lupin carpet the green velvet landscape. We drove through quaint towns like Amador City, Sutter Creek and Jackson as dusk fell. It wasn’t until the latter part of our route, when we somehow got turned around in Altaville and ended up going E/B on the 4 that we realized that I should have listened to “Martha” (Google Maps).  If it had been daylight, this entire drive would have been remarkable, and even fun. But it wasn’t. Rather than backtrack to the 49 (Why would we do something “sensible” like that?), we took an “alternate” route that would take us to Hwy 120.  Thus, in the dark of what was now night for these parts, we turned at the small town of Copperopolis whose new, but old-timey downtown that glowed like an emergency beacon in the darkness, and onto O’Byrnes Ferry Rd. In no time, our drive became, for lack of a better description, Frick’n Scary! Imagine a pitch dark (wilderness dark), narrow, two lane, sinuous road with dips, banked turns, poor signage, no cell service and wildlife, in a RAM 2500 with a camper. We had forgotten to account for how dark it gets in the country-side, or central California for that matter, at “home” in Southern California, some form of ambient light is inescapable, and the norm, to some degree. For a tense 1 .5 hours we drove till we intersected with Hwy 120 and finally found a place to camp outside of Yosemite, at the Don Pedro Lake Recreation Area, Moccasin Point Campground, just off  Hwy 120.  It cost us $16, and again, we had this place to ourselves.

Having never visited this campground before, it took us a couple to “laps” to find the “right spot”, and then drive all the way back to the kiosk to self-register and pay. Needless to say, considering how tired we were, the selection process became a little “heated”. Having to dig for exact change didn’t help. As usual, a good night sleep generally fixes everything. We awoke to turkeys walking the campground and bright blue skies. Perfect for the final leg to Yosemite Valley. Once on the road, we were glad that we had found the Don Pedro campground, for the remaining drive on Hwy 120 was even sketchier than our night drive, but ooh so beautiful. A small sports car would have been the ideal vehicle of choice for last night’s and this morning’s drive. As we exited the tunnel, the scenery opened up which required an obligatory stop for a photo and to take in the beauty.

We look in awe, as the Merced River leads our eyes to Yosemite Valley. We enter the Valley and immediately check to see if camping is available. Unfortunately, and although it is early in the season, nothing is available due to the effects of the heavy snow year which has left fallen limbs and flooding throughout a majority of the campsites. In previous years, securing a site would have been no problem. Since it was fairly early in the morning, we found a parking spot near the Visitor Center…in a puddle, which were practically unavoidable. 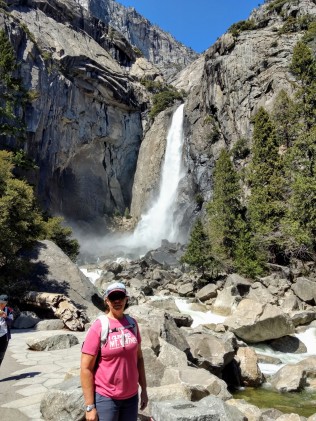 From here, we played tourist and took the path to Lower Yosemite Falls (320 ft), that ironically in all the times we have come to Yosemite, we have never actually walked to this particular falls. On the way you can see Upper Yosemite Falls (2425 ft), but once you reach Lower Yosemite Falls that view is mostly obscurred. We arrive at the Lower Falls and witness a white cascading torrent of water billowing from the falls. Mist cools our skin and coats our sunglasses, even at a “healthy” distance.

Satisfied, we returned to our truck to find that our lot (all the lots) is now completely full and vehicles are “pacing” through the parking lot, waiting to pounce on the next available parking spot. We waived them off and made lunch, with a plan to take the inner park shuttle to Curry Village, or rather Half Dome Village (I will never get used to the name change), and hike to Nevada Falls.

It’s nice to have the road closed to vehicle traffic 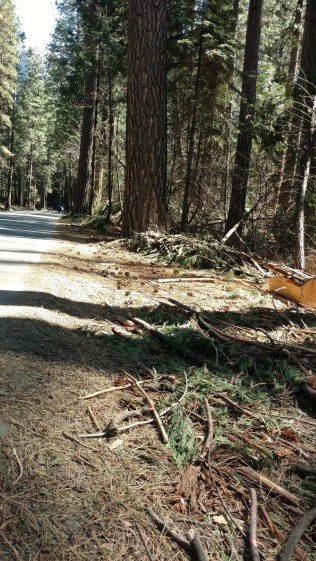 From Half Dome Village, we begin our walk to Vernal Falls. We make it up to Vernal Falls, with a herd of people (again, we forgot it was still Spring Break) and find that the 2.4 mile trail to Nevada Falls is closed due to a recent avalanche and trail damage, thus it is still covered in snow and some ice.

Nevada Falls in the background

As we do not have our micro spikes with us, or trekking poles, we make an about face and weave our way back down the paved trail for a crammed bus ride back to the main lodge. In some ways, we feel like we are at an “out-doorsy” Disneyland with the “crowds” and diversity of visitors.  We feel “naked” without a giant camera hanging from our necks and “proper” hiking shoes and floppy hats.  Once off the bus, we stop and admire a “Stealth” Van and its #VanLife innovations. As luck would have it, its inhabitants arrived at the same time we were admiring their ingenuity. They let us inspect their craftsmanship.  Turns out that they are a young couple from Rhode Island on “ski-safari”, living the #VanLife…for now.  The young couple (Ethan & Bell) were also looking for a place to camp, so we figured we may see them again. As there was no was camping available in the Valley and we could not head toward Toulumne Meadows (our favorite part of Yosemite) due to Tioga road still being snowed in, we headed to the Wawona campground, in search of a site, but not before we got a glipse of Horsetail Falls  radiating in the sun. If you catch the falls in February when the sun is right, the falls will look like a lava flow. 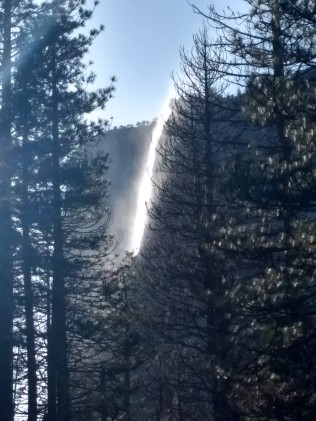 This particular time of year, it only mists white.  A left turn off Northside Drive, over the El Capitan Bridge, followed by a right turn onto Wawona Rd, we are on our way. 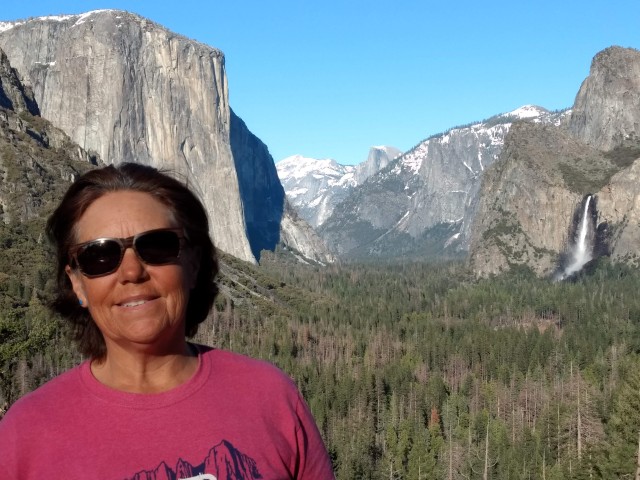 We stopped just before the tunnel, in a perfectly placed parking lot, and are treated to an iconinc view of the valley with El Capitan (3,000 ft), Half Dome (5,000 ft) and Ribbon Falls (1,612 ft) intesecting along a diagonal line.  When we arrive at the Wawona Campground we are pleased to find several sites open for the night. 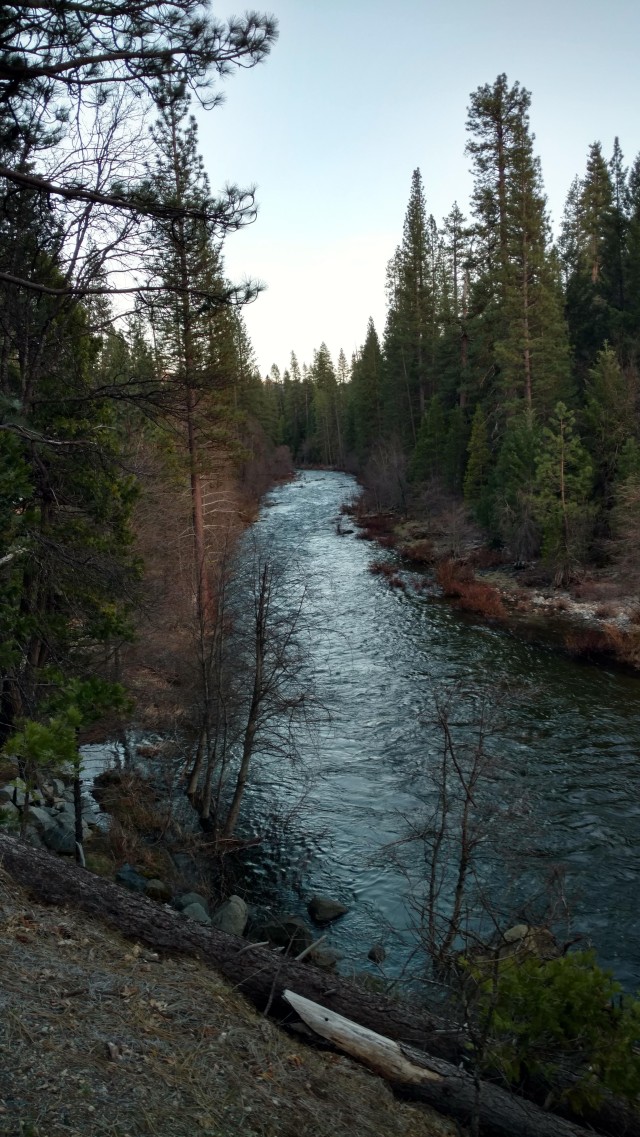 We chose a spot in the upper park of the campground, a short walk from the South Fork of the Merced River.  In no time, Ethan and Bell also found their way into Wawona, and as there is room, they join us in our site.  We spent the evening chatting, sharing stories and whiskey.  In so many ways, they are a younger version of us.

The next morning we decide, on a whim, to head to Kings Canyon to see the BIG trees.