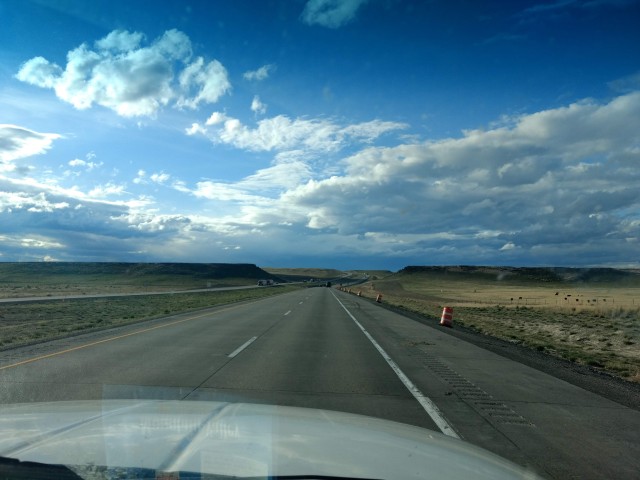 Upon leaving Utah, we pushed toward Washington and the Columbia River Gorge to visit with our friends Brian and Jody (aka “sidekick”) who had recently moved to Salmon River Washington. We exited Utah and drove through (Hwy 84 West) the lower half of Idaho via Hwy 30 (West). The route was pleasant and sparsely populated…for a California driver that is. 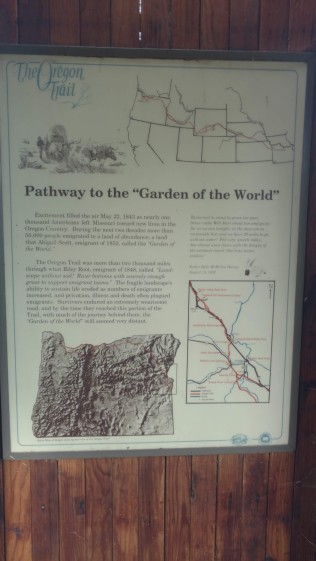 On the way we camped for the night at the Farewell Bend State Recreation Area in Oregon, along side the Snake River, that divides Oregon and Idaho. According to the interpretive signs in the park, this area (where the river truly “bends”) was called “Farewell Bend” as the Oregon Trail then took a “turn” overland (for a good distance) to the Columbia River. The campground has three loops with 122 sites, divided into 30 tent sites and 91 electrial/water hook-up sites. It is open to Day-Use year round, but is closed to camping during the months of December, January and February. From March 1-Nov 30, on the Catfish, or “C” loop is open which has sites 84-122.  The two other loops are open May 1- Oct 31. We were happy to find they had quite a few open sites. A “wild” night punctuated with sounds of running water and the incessant honking of geese in the throws of mating season made for a less than restful night.  I have to say, that after a short stroll around the campground, and down to the river, I can honestly say that I have never heard nor seen so many geese in my life.

The scenery was splendid, I only wish we could have “muted” it. Upon leaving Farewell Bend State Recreation Area, we drove along the I-30, which loosely follows the Oregon Trail, over often steep rolling hills where we often spied deer and a few elk. Eventually we came upon the Columbia River, which to me looked like a shipping lane. 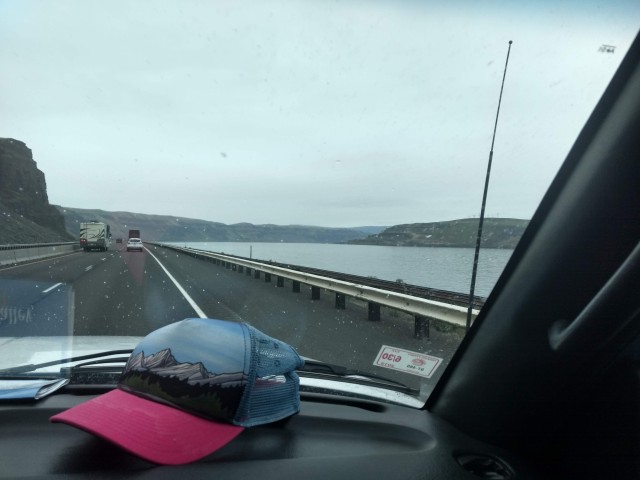 I had never seen a river so wide. Aw, the fish this river must hold, and the tales it could tell percolated in my mind. Just prior to making our destination and whilst crossing the bridge from Oregon to Washington, we spied our friend Brian paddling his surf ski in the river. Ironically, and simultaneously, he spied us as well. We had worked together for so many years that being aware of where your partner is, I guess never goes away. The rest of the day was spent touring their new house (and neighborhood), catching up and sharing a beer…or two. I can’t believe they moved so far away, but they do have an awesome view of Mt. Adams from their living room without having to camp in the dirt to see it.

Stole this from Brian’s Facebook page, as it was shrouded in clouds when we were there

While we would have liked to stay longer and explore more, I had to get up to Federal Way, Washington, to help officiate in the annual Rain City Spring Splash Water Polo Tournament.  Here we would “luxuriate” in a hotel for two nights…or so we thought.  As our luck would have it, the elevator broke (we were on the 5th floor) and the water had to be turned off due to grey nasty water flowing from the sink/tub and toilet. 1/3 of the refs were sick the next day.  Other than that, we had restfull nights sleep and tremendous hospitality at the tournament site. 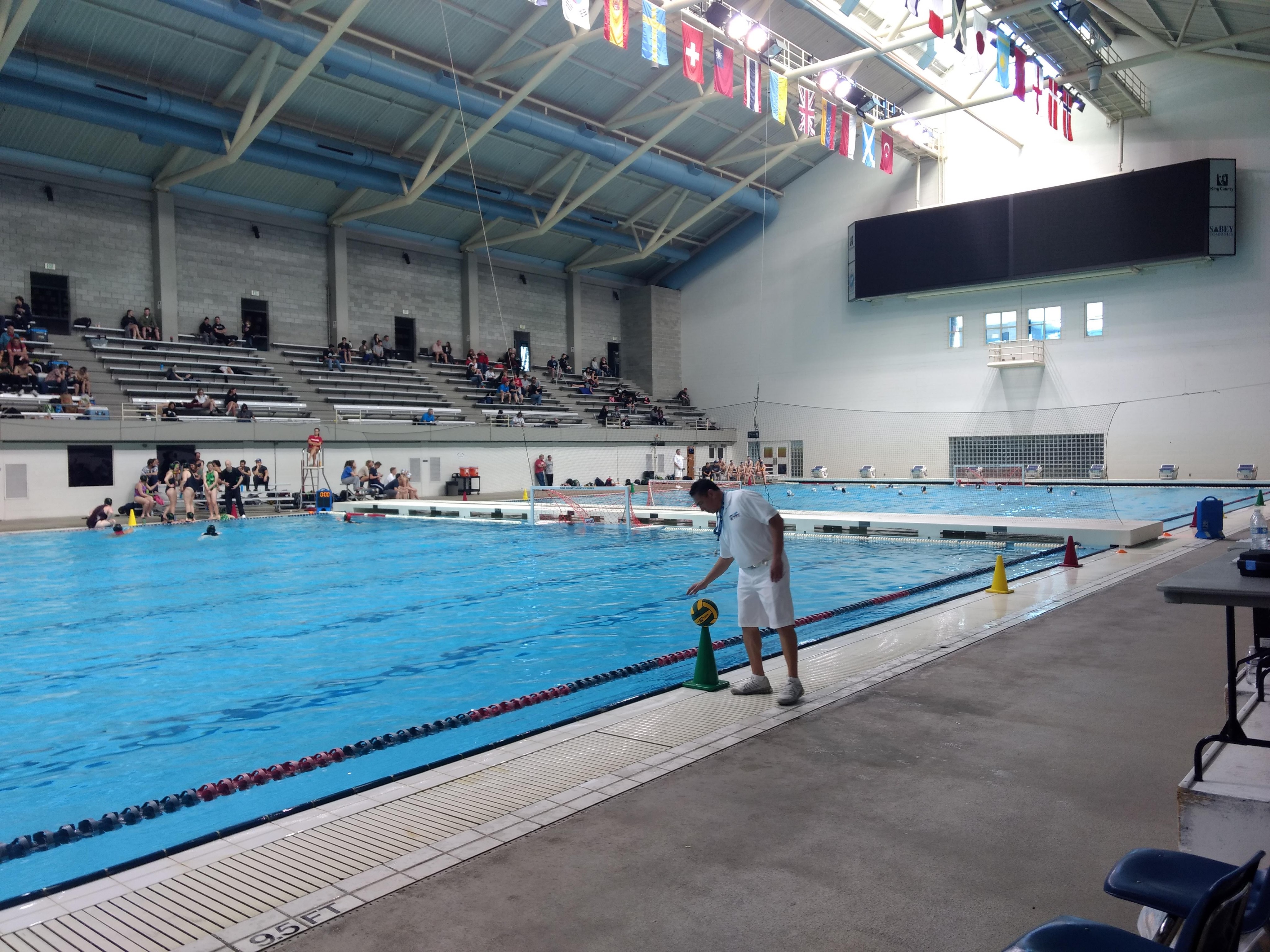 I would officiate 13 games over two days, while Paul skied The Summit at Snoqualamie, a ski area that we had hiked through during our 2014 Pacific Crest Trail thru-hike.  Paul attempted to ski Snoqualamie two days, both with less than enjoyable results.  He found the terrain dangerously icy, and entirely too late in the season to be worthwhile expending any amount of energy.  It should have been a clue, when the ski-patrol extolled him to “be careful out there, its really icy”. He thought the obviously young ski patrol person was being “age-ist”. Nope, she was just doing her job.  In any event we plan on returning to The Summit at Snoqualamie next season and giving it another go a month or two ealier so as to catch it prior to spring sleeting season.  Once the tournament ended we headed out to Crystal Mountain, as they allow overnight camping in a designated portion of their parking lot…for a fee ($40/night with electrical, up to 14 consecutive nights). 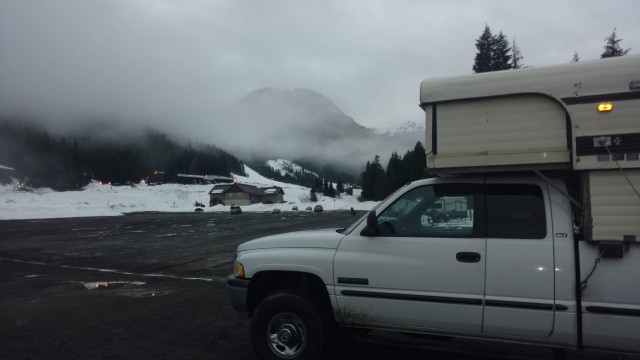 We rolled into the lot and picked a site, set up. 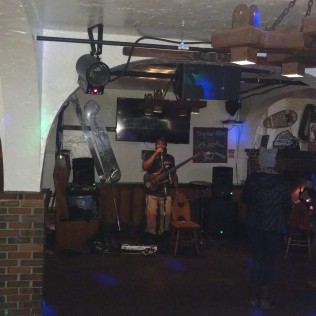 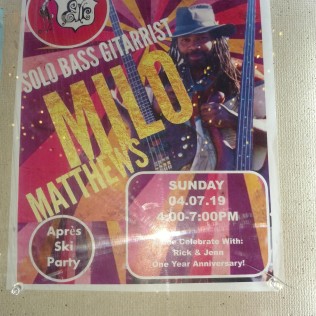 We then then wandered over to the Snorting Elk Cellar , upon recommendation from a young man at the water polo tournament I had been reffing, to have a beverage (or four) and enjoy some live music (Milo Matthews).  Milo, is a one man band and an amazing singer and bass player.  If you ever get the chance to hear him play, it is certainly worth the price of admission. (In this case we lucked out, as he had been booked for a wedding anniversay, that we got to “crash”, thus no cover charge) 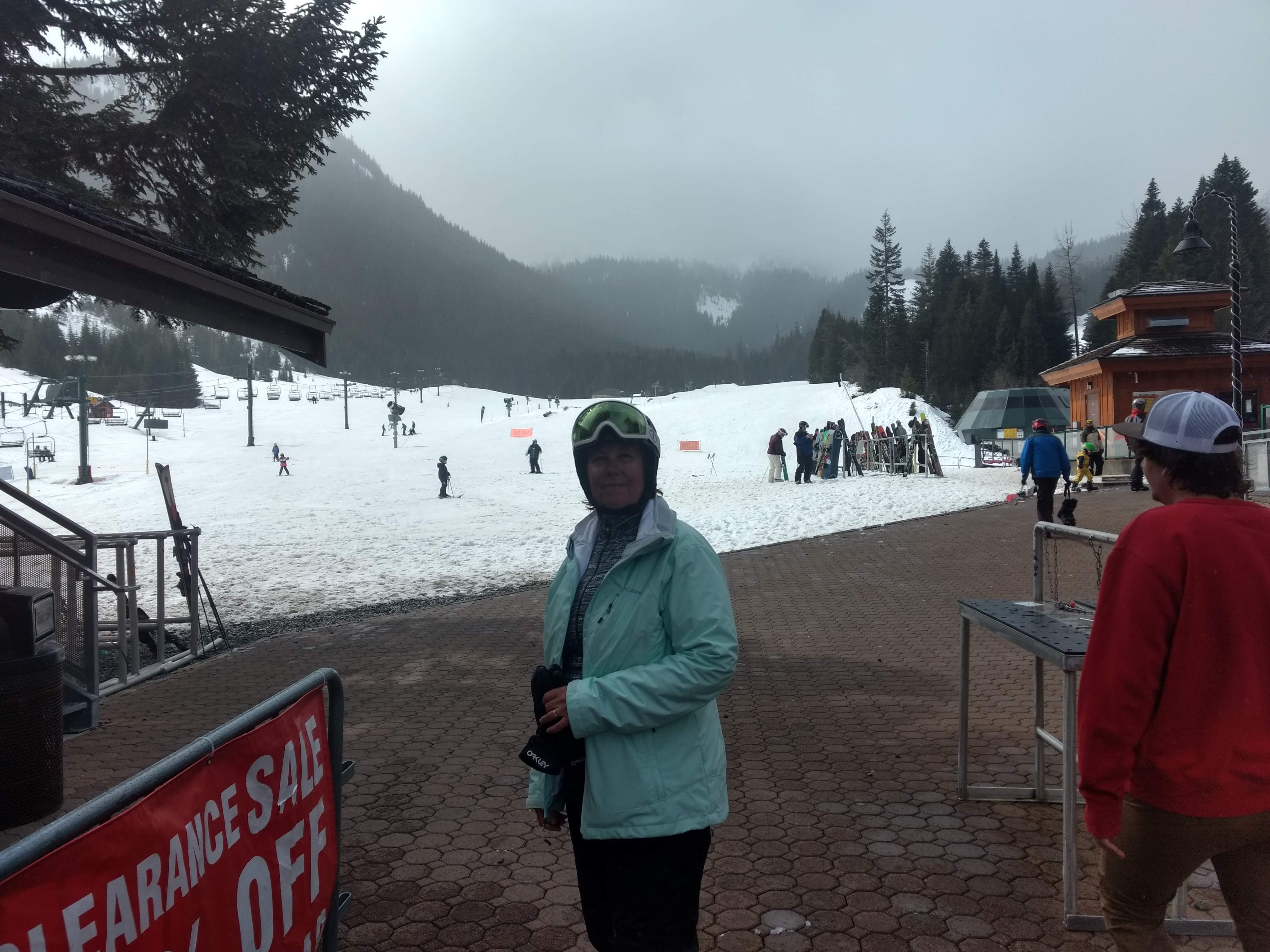 The following morning, under cloud engulfed skies we headed to the ticket booth to get our passes for the day.  Straight up to the top we went via the gondola, still shrowded in clouds.  The snow was a little sticky, as we obviously had the wrong wax on our skis to accommodate slogging through the heavy “wet cement”.  The fact that my goggles decided to fog on me continually despite all my tried and true efforts to clear them, and the fact that my legs were completely worn from 13 games over two days made for a frustrating and frankly unpleasant session.  This was highly disappointing as when we did the PCT in 2014, we walked above and across from the Crystal Mountain ski area, admiring its terrain and vowing to return and ski this place. After two hours, we called it and decided to head back toward California with grand intensions of making several side trips in Oregon and Northern California before going home for the season.  We however, have not given up on this ski area, and plan on making a bee-line to Crystal Mountain much earlier in the 2019-2020 ski season when the snow is “fresher”.

Now, for our “Ikon-ic” Winter – Side Trips