Los Alamos is a quaint, and during work hours appears to be a “sleepy” city.  If it were not for J. Robert Oppenheimer having vacationed in New Mexico in the 1920’s, and there being a “ready made facility” for immediate housing at the all-boys Los Alamos Ranch School,  this city and its significance to the world would be mute.  Per capita, this city’s inhabitants have to be the largest collection of ridiculously smart people in the world.  The Los Alamos National Laboratory (The Lab), and the Department of Energy (DOE) being the prominent employers.  It was not until we entered WWII, and a urgent letter penned by Albert Einstein to President Roosevelt, about the Nazi regime’s research and closing possibility of creating a nuclearized weapon, that the US became serious about “beating” the Nazis, and weaponizing nuclear energy.  Hence the Manhattan Project and the “birth” of Los Alamos, home of Project “Y” (the weapons portion of the Manhattan project).  Los Alamos was not the only “secret” research facility, as there were other research sites located around the country in Oakridge Tennessee and Hanford Washington, to name a few, all involved in the Manhattan Project.  Incidently, the Project’s name originates from the location (Manhattan, New York) where the “mission” was crafted.  Did you know that two scientists (Harry Daghlian/1945 and Louis Slotin/1946) died from radiation exposure at Los Alamos, and two years prior to that (also related to the Manhattan Project) three others died in an explosion at a Philadelphia Navy Yard .  The Navy yard deaths were not attributed to the cloud of (low level, but toxic) uranium gas (that actually contributed to their deaths) because of the secrecy of the Manhattan Project.  It’s funny how we all know about Three Mile Island, and obviously Fukushima but I’m pretty sure most do not know about Los Alamos or another so named Atomic City, and/or Arco City in Idaho.   Needless to say radioactive material is not to be treated lightly.  The inception of the Manhattan Project to combat the very real threat from the Nazi scientists could easily be considered the “birth” of the nuclear arms race.  The devastation of the bombs, developed at Los Alamos, put an end to WWII.

Ideally, the first and smaller gun-type fission bomb (Little Boy, August 6, 1945) “should have been enough”, however the Japanese Generals refused to surrender,

so three days later (August 9,1945) a second larger implosion-type fission bomb (Fat Man) was detonated over Nagasaki, effectively ending WWII on all fronts.  Had neither of the two NOT done the trick, we were set for an all out invasion in November of 1945, wherein hundreds of thousands of soldiers (on both sides), as well as significantly more civilians would have, in all probability, died.  Ideally this is the first and the last time such devestating weaponry will be used.  There is plenty of history to examine at Los Alamos.  During the Manhattan project time period, all who worked at Los Alamos were known only by a number and all who lived and worked there had the same mailing address (P.O. Box 1663), and wore picture I.D.’s (no names) with their job title on color coded badges that demonstrated their particular level of “access” throughout the town.  It is said that Sears and Roebuck (that resident workers of Los Alamos ordered most of their supplies from) got suspicious when several baby bassinets were sent to the same address.  Babies born at Los Alamos, during this time period, had PO BOX 1663 listed as their place of birth.  Secrecy was EVERYTHING, but you can learn all about it now at the Bradbury Science Museum.  It not only chronicles the history of the Manhattan Project as it pertains to the Los Alamos site, but also the current studies and current advances cultivated at the Los Alamos National Laboratory, that has partnered with the museum.  The website www.atomicheritage.org is also especially interesting, if you want to remotely get your “nerd” on, as it pertains to anything radioactive.  The Bradbury Science Museum is more than about the Manhattan Project as it has four galleries: 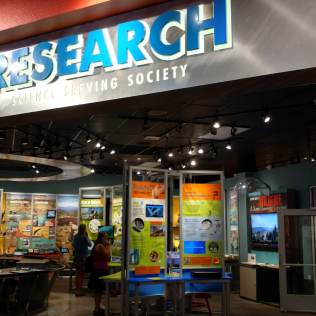 Defense (involving Global Security), History (particularly that of Los Alamos and the Manhattan Project), a Research Gallery (Science serving society) and the TechLab, in which I could have spent the whole day feeding my inner “nerd”, and testing my knowledge (no pictures of the  TechLab…too busy “playing” with stuff).  This museum was the only place with historic significance that we were able to visit and be able to make it to Chaco Canyon before night fall.  Even so, our brains hurt by the time we left the museum.  A return visit, a must, as well as the remaining historical sites in the city. 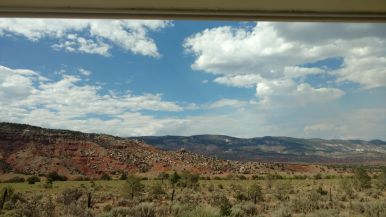 Up until the 7950, the road is paved, and then 14 miles out from the park, the road turns to a washboard riddled dirt road.

When we arrive the visitor center is closed, but seeing we have reservations (a must!) we check in with the camphost for direction to our site.  Behind our campground are readily visible ruins from the inhabitants of Chaco canyon.  Ironically, there is a Ranger talk that evening, on the “Night Sky”.  Chaco Cultural National Historic Park is an UNESCO site and an offical International Dark Sky Park.  Even so, we decide to pass…the moon has gotten bigger and brighter.

Time to sleep and prep for the morning and more exploration.  As we settle into bed, the sounds of elk buggeling in the distance is our evening’s lullaby.