Almost up early to beat the mid-day heat for our hike to Rainbow Falls, our plans now included a necessary return trip via our same path, as the shuttle to/from Reds Meadow was not scheduled to run till 5pm that Friday. It was Thursday. Not to worry, Mammoth Lakes offers a hearty trail system and a route to Rainbow Falls from Horseshoe Lake via the Mammoth Pass Trail. Normally we would take the Reds Meadow Shuttle from the Mammoth Mountain Lodge (for a fee of now $9/adult), get off at Shuttle stop #9, and spend the day in Reds Meadow with an “easy” 2.5 mile (3.5, if we went to Lower Falls) round trip hike to Rainbow Falls. As this was not an option, we would hike the 5.5 miles down to Rainbow Falls via the Mammoth Pass Trail out of Horseshoe Lake, and return the same way, making it an 11 mile day. Brian would not be joining us on this particular hike as his sinuses were killing him, a possible adverse effect of the current altitude.

Brian (and Russell) dropped us off around 9 am, with instructions to pick us about 4pm…with cold beers. As with all hikes and trails for us, it started with an uphill trek. Within minutes our lungs were searing, as we gulped for air, and stopped periodically over the .08 mile, 362 ft climb to the top of Mammoth Pass at 9,423 ft. Needless to say we felt rather pathetic with regard to our lack of acclimatization and more specifically our inadequate level of hiking fitness. Nevertheless we soldiered on, smiling sheepishly at, and stepping aside for, the swift footed PCT and JMT hikers coming from and going into town via the Mammoth Pass Trail. 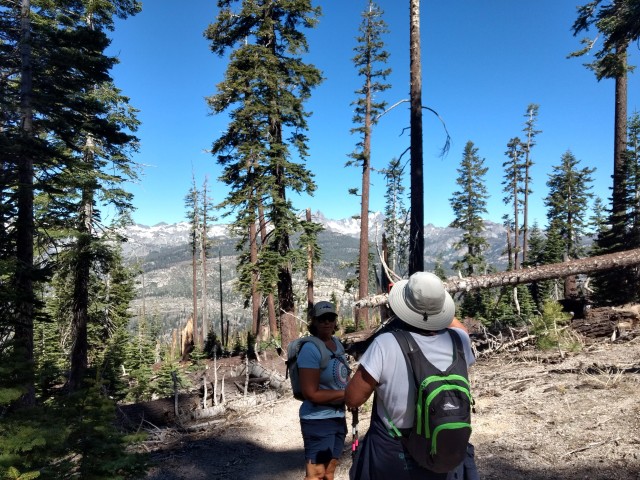 Once cresting the Pass, we enjoyed a clear breathtaking view of the narrow valley below that houses the Middle Fork of the San Joaquin River. 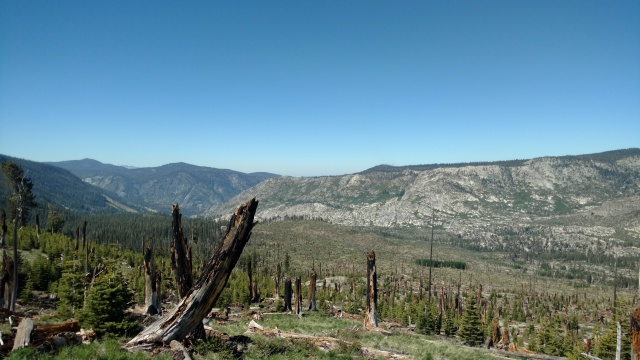 In August of 1992 a lightning strike fire ripped through the hillside and valley we were descending into. This led to even more devestating damage nearly 20 years later when in November of 2011 the “Devils Windstorm” with winds upwards of 200 mph gusted through this area, snapping 2-4 foot diameter trees in half like matchsticks, creating a cascading effect of damage, which left the valley looking like a giant’s personal game of ‘Pick up Sticks’. We continued to descend, amazed at how “deserted” the trail was. We felt like we had the forest all to ourselves, especially once we reached the normally tourist clogged trail to Rainbow Falls. 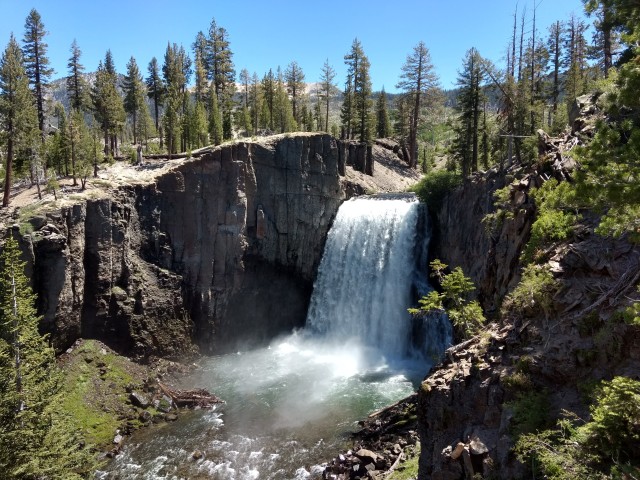 Once at the falls, we discovered that the trail down to the base of the falls was still under repair, and after talking with the work crew, we learned that the full repair would not be completed for this summer season. Rainbow Falls is a 101 ft tall falls whose mist creates a rainbow effect in the sunlight. If you look closely you can see the point from where these falls “originally” fell, having worn down and eroded nearly 500 feet of solid rock. The power of water is amazing. The surge of water cascading over the edge of rock and down into deep pool is the heaviest flow we have seen this time of year, due I’m sure to the current hot weather that is quickly melting the late accumulation of snow. We lingered here a bit and had lunch, dreading the 3.5 mile uphill climb back to whence we came. We considered taking a “flatter” route via Reds Meadow, past Devil’s Postpile toward Agnew Meadows and up the Postpile Road to the main Lodge at Mammoth, but that route in itself was 11 miles, and still included a hill climb (on asphault) in the middle of the day. Normally we would have preferred to NOT hike through an exposed area at high noon, but if we were going to meet Brian by 4pm, we had to get going. As we marched uphill, we did so, using the sparse patches of shade as our motivation.

A doe looked at us incredulously, as we huffed past her, interrupting her mid day snack. Several PCT hikers and a few JMT hikers skipped past us (both uphill and down) with packs either “empty” or fully loaded for their next leg. The point is that they skipped by us. As we neared the top of the pass, shady areas became more frequent, and Jody was soon introduced to the concept of “false summits”, for as everytime, we thought we were to the “top”, there was yet, one more (actually 4) more uphills! Considering we were fairly gassed, we were amazed at how little time it actually took to crush the day’s 11 miles. Maybe it was the thought of ice cold beer (or in Jody’s case,a Diet Coke) at the end of our day’s trek that motivated us. It didn’t much matter. We we’d seen beautiful sights, and burned some calories in the process. A day well spent! 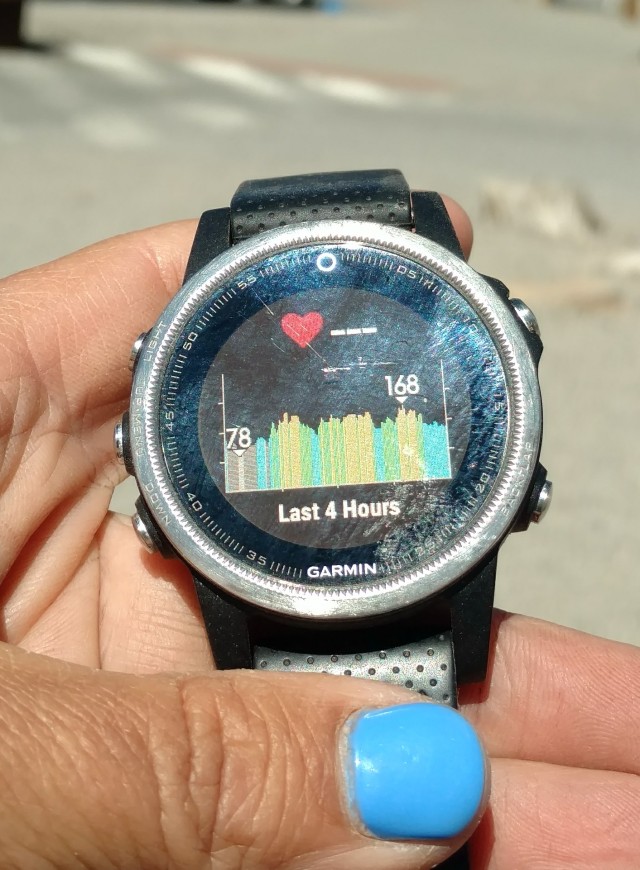 As we waited for Brian, Jody scrolled through her Garmin watch that records not only her trek, but her heart rate, and exclaimed, “168 beats per minute! No wonder it was so hard to catch my breath.” If Jody’s heart was racing that fast, I figured mine was probably similar, good thing we took plenty of breaks and I forced myself to consume a super saturated blast of electrolytes to keep the electrical rhythm of my heart at a proper pace and cadence. For me, anything over 159-164 beats per minute means that my heart may get stuck on “fast”, and that is not a good thing.

Soon Brain arrived, cold beers (and a Diet Coke) in tow. Next stop, Mammoth Brewing Company and a round of Cornhole, followed by Slocum’s and their Happy Hour $5 cheeseburger w/fries and ice cold beer on tap, to also include $2 PBR bottles ALL DAY. PBR (Pabst Blue Ribbon) beer. On our PCT thru-hike it seemed that PBR was the go to thru-hiker” beer, not sure why but it was, but had we’d been on a thru-hike, PBR would have been consumed. I will say though, that everytime we see a bottle or can of PBR, it immediately conjures up memories from our PCT thru-hike. With our daily exercise and now dinner complete, all that was left to do for the night was beat Brian at Mexican Train, and plan our next day’s hike/adventure.

*I didn’t beat Brain. Paul won, not that he gloated or anything, and next on the hiking list is McGee Creek, of which we have been wanting to do for some time now.