This past week we returned to Mammoth Lakes and met up with our long time friends, Brian and Jody (of “Magnificent 7“) both of whom who had joined us on the Trans Catalina Trail 2 years ago. On this joint adventure there would be no tents or dehydrated food, but there would be hiking. Early afternoon Tuesday (the best day for road trips) we pulled into the Mammoth RV park, paid our 4 night fee ($50/night) and motored over to our patch of asphault, complete with water, power, WiFi, and even cable (who does that?). A stone’s throw away was the full service restroom, complete with hot showers and a laundromat. Better yet, Brian and Jody had already arrived and had dinner and ice cold beers waiting. A true Glamping experience, at least for us, where most of our adventures involve a tent and some form of braving the “elements”. While we have stayed at this RV park before, it was mainly to escape blizzard conditions this past ski season, and to “thaw out” with a hot shower, after practically freezing ones ass. 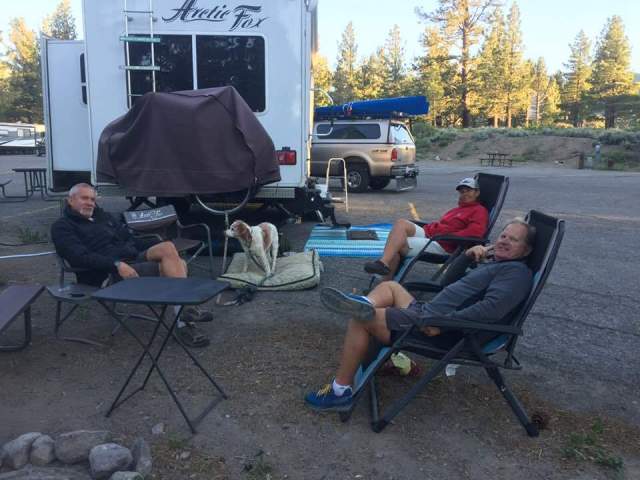 After dinner we continued our catching up. Brian and Jody, who used to live near us, sold their home and have been living in their luxurious tow behind trailer for nearly a year now. We aspire to be like them some day. As we talked and solved the world’s problems, we roughed out the next three day’s glamping activities. We decided that the next morning that it would be a good idea for Brian and Jody to acclimate to the altitude, having spent the last 6 months, essentially at sea level, thus we would drive over and circumnavigate the 167 acre, naturally fed, Convict lake, and maybe even fish a bit.

We wandered back to our Alaskan Camper, which is a low profile cab over camper that fits into our Dodge’s 8 foot bed. My father gave us this camper when he upgraded to a newer Alaskan. Ours is over 30 years old, and after having lived exclusively in an ultra lite tent for over 5 consecutive months thru-hiking the PCT in 2014, it is still quite luxurious to us. A (now) fully insulated enclosure with running water, a three burner stove, an oven, a fridge, actual utensils/cups/plates/pots and pans, a pantry, limited storage, a “dining area” (that converts to a second sleeping berth), a heater, and electricity all add up to some “easy living”. Since we were Glamping in an RV park, there was no need to break out the shovel and set up the 5 gallon bottomless bucket and toilet seat for “nature’s call”. As we retreated to the confines of our camper, we remarked how nice it was to not be in an RV park next to the railroad and how quiet it was…until, we noticed a constant electrical humming of a generator. Puzzled, we wondered why one would be using a generator if they had access to electrical hook-ups, then we realized it was the hum of nearby Mammoth Lakes Hospital’s generator, opposite our site. Go figure! About that time, the interior of our camper lit up like being in a tent on a full moon. Seems our site also had “street lamp” that finally worked its way on, well after all the other “street lights” throughout the campground. We solved that problem quickly with our make-shift foam winter window insulator, and would later put that evening light to good use during the next two night’s raucous dominos matches of Mexican Train.

As with all vacations, the intent and ability to “sleep in” is always on the agenda, but internal clocks, as they are, don’t necessarily go on “vacation”. We did our best to putter around and delay doing something “meaningful” in order to allow Brian and Jody to “sleep in”, the next morning. Ironically, they were doing the same for us. As a result, it was well into the morning before we finally got on the road to Convict Lake.

This was of course after we had to make a mad dash from Brian and Jody’s site, to close up our camper in order keep a wandering/curious bear from “moving in”. After a relatively short ride from Mammoth to Convict Lake, we lucked out and found a parking space on the west side of the lake. [This lake was originally known to the Piuate Indians as “Wit-sa-nap”, referring to the fact that they believed the lake was inhabited by “magical fish”, which in some cases is true, as this lake produces some “hog” size trout, both rainbow and german browns. It’s name changed in 1871, following a shootout with escaped convicts from Carson City. The two nearby highest mountains are named in honor of two posse members (Robert Morrison, Mono Jim) who were killed in the shootout. Those who have watched commercials for Nature’s Valley granola bars, or seen the 1998 film, Star Trek:Insurrection, the 1962 highly acclaimed film ‘How The West Was Won’, or the 1951 film ‘The Secret of Convict Lake’ might recognize scenes involving Convict Lake.]

From here we would follow a well worn and maintained 2mile trail that circumnavigates the lake. Brian and Jody brought along their dog, Russell, who loves the water. Russell did his best to drag first Jody, then Brian into the water. We have been told that the northwest end of the lake, where the creek feeds into the lake is the most successful place to fish, so when we arrived at that end we stopped for lunch and decided to try our luck. It was not the optimal time to fish, but any chance to toss a line in the water is a good thing. As we broke out our gear, Russell patrolled the shoreline, unbenownst to us apparently consuming a fair amount of floating parcels of Powerbait, which would later render him fairly listless and miserable. While not being exceptionally good at fly fishing, my ADHD brain prefers this form of fishing to spin casting. Paul, on the other hand would rather spin cast. His ability, however, to adequately cast was severely limited when he discovered, in his haste to pack one of our two, two-piece fishing rods, that he had put the reel ends from both rods in his pack. Had the lake been iced over, it would have been the perfect length. This, however, did not dissuade him from attempting to fish. ( I wish I had a picture of this, but poor Jody is currently in a “black hole” of communications and could not send me one of her many pictures) Once all set up, I waded waist-deep into the refreshingly cool water and did my best to NOT “tie” knots in the air, as I tried to extend the cast of my fly into the lake with a now increasing head wind. With that said, I definitely need to practice more…in less than optimal conditions. Having no success, and a now stiff head wind, it was time to walk the remaining mile around the lake, back to Brian’s truck.

Russell was less than enthusiastic about heading back, as the trail (made up of crushed and course granite rocks) was now extremely hot, and after a short while got carried, to avoid burning his pads. Once back at camp, we dined on a magnificent venison meal prepared by Jody.

Fully satiated, and having switched from beer to “gluten free” spirits, it was time for a rousing game of dominos… specifically, Mexican Train. Bear in mind there is no love loss between the four of us, and certainly NO allegiances, whilst playing this now blurry spotted game. During some rounds an abacus would of been helpful to add up the points still held. Prior to retiring for the night, the next day’s activities were roughly outlined. A hike to Rainbow Falls was in order.

This entry was posted in Uncategorized. Bookmark the permalink.