Having just sucked down our first cup of cowboy coffee, the quiet enclave that is the Eastern approach to Aravaipa Canyon was rumbling with activity.

A dust cloud proceeded the entourage of 4wd vehicles that poured into the creek and our serene abode.  Looks like all the permits will be used today!  7 vehicles and 13 people later, the East end 20 were sloshing through the canyon.  Luckily we were going the opposite direction.  Today was to be an easy day.  We were in search of what was to be an intact early Indian cliff dwelling.  Off we trod over a wonderfully compact BLM dirt road.  One creek crossing, then two, three, four, five (dry does this count?), six, and seven but no corral or sign. 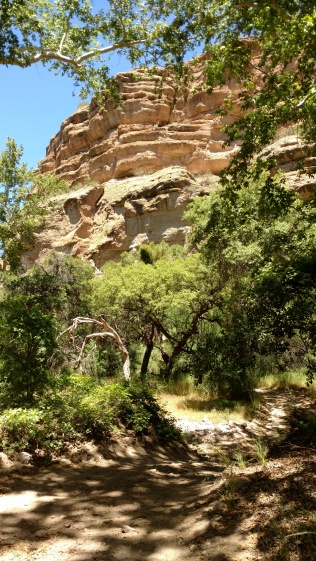 Maybe we counted wrong.  Okay, two more and whaa-laa there is the corral and just beyond that is the sign. 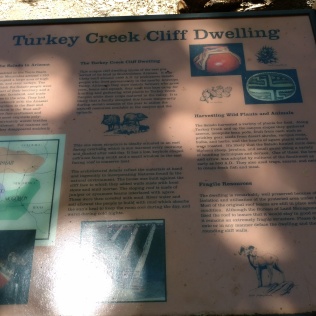 From here we follow a narrow trail that leads to a well kept cliff dwelling.  BLM has repaired it a bit, but for the most part it is fairly well intact.  We climb up and explore a bit. It was built somewhere around 1300 AD and was “abandoned” around 1450 AD.  The best we can surmise is that it was a seasonal “hunting cabin” of sorts.  We imagine the creek ran a bit wider, deeper and faster, so this was on the edge of the creek above the high flow line, and thusly kept one “high and dry”, and out of the weather for the most part.   Deer, coatimundi, rabbits and other furry edible creatures were obviously in abundance (otherwise why build such a sturdy structure). 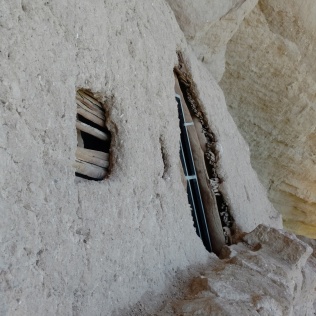 And either these hunters were much smaller than we are today, or the tiny doorway and small interior were a means of staying warm and keeping unwanted critters out with greater efficiency.  Minimalists take note. 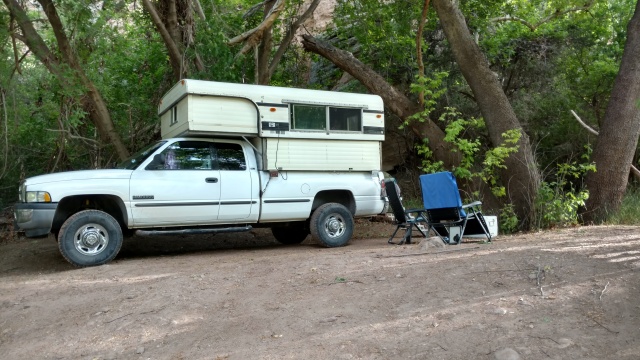 Upon returning to our camper, it was time to pack up and head out.  Our goal on the way out was to check out the “resupply” point at the Klondyke Post Office (which is for sale?).  And after that to find the “turn” on the Grand Enchantment trail “out of Klondyke”.

After surveying the “Post Office”, we went in search of the next “turn” out of Klondyke on the Grand Enchantment Trail.  We believe we discovered the “turn”, but unfortunately signage is not good, and deft knowledge of map reading, GPS devices and their corresponding waypoints is a must, something we are going to have to really practice if we are going to do this trail.  And with that he headed back to California.  But NOT without another exploratory stop.  More tomorrow.