Our 26 mile passage across the sea (Pacific Ocean to be exact) proceeded flawlessly.  The seas were calm and teaming with sea mammals frolicking in the wake of boat.  A pod of over 100 dolphins flanked us as we motored along as well as four blue whales surfacing at intervals to exhale.  Our first stop is Avalon where most of the passenger disembark.

Motoring from Avalon to Two Harbors

From here we will motor around to the west end of the island to Two Harbors.  It appears that we will not be alone on our trek of the Trans Catalina Trail (TCT).  A pod of men dressed in hiking gear…and various pieces of camouflage attire will join us as we overhear talk of Parson’s Landing…our first destination on foot. 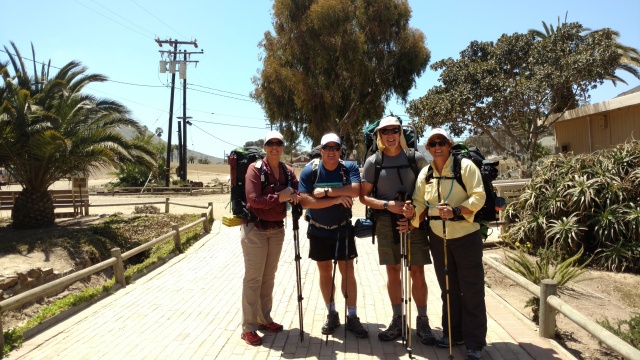 The “Before” photo op…OneSpeed, Just Paul, Brian and Jody

We land at Two Harbors (Isthmus Cove) and grab our packs. The original plan was to road walk to Parson’s Landing (7 miles), set up camp and slack pack to Starlight Beach and back (another 8.4 miles round trip). An “easy” day. We, however, didn’t do the “math” before we left and consider the time we would arrive into Two Harbors. Since we didn’t land in Two Harbors until 1130 or so, we had a “brilliant”, but flawed idea to take the TCT trail route (across the isthmus and up from Catalina Harbor) to Parson’s Landing and hike to Starlight in the morning. The concept was sound, but execution was brutal. 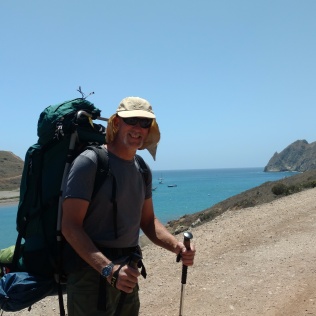 Brian…How much does your pack weigh? 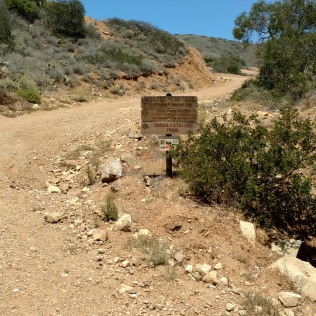 And so it begins…

Up we climb rising above Catalina Harbor, the other side of the Isthmus Cove where we came into

All Trails begin with an Uphill 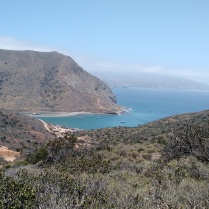 We walk across the isthmus and begin our uphill climb (think Goat trail, as the TCT is based on Goat trails turned ” roads”), each ladened with 3 liters of water each in the noon-day sun.  It was brutal.  (Welcome to thru-hiking, Brian and Jody) We laughed about the fact we knew better, but continued anyways. Although it was supposed to be in the 60’s, it was hotter and drier than a Shasta City laundromat in August. We should know better that Catalina is part of the coastal desert, but the fact that it’s an island, one can’t help but think “tropical”… Idiots! 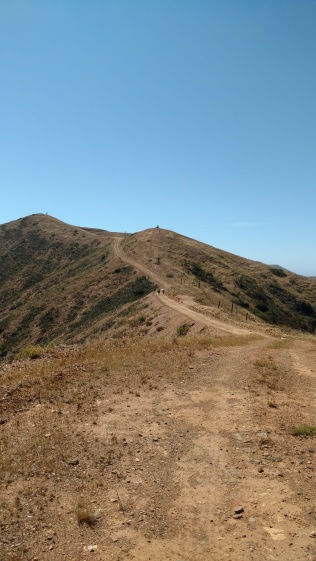 We remark that no couple other than Brian and Jody would accompany us in this lunacy. I think to myself, what a better way to test out my left knee and (currently) my right foot after having not hiked for over 3 months, than with a 3.5 mile 1600 ft practically straight up (remember the goats) followed by a 3.5 mile, 30-45 degree grade down into Parson’s Landing. 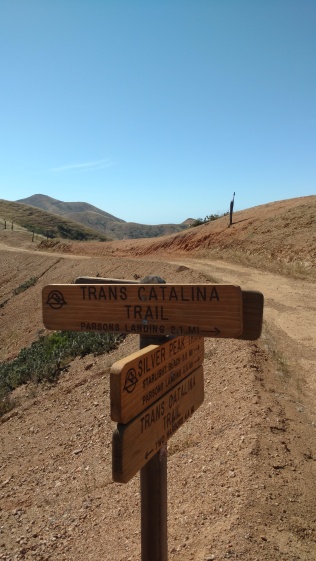 Just because my tested IQ says ” genius” doesn’t mean I’m necessarily “smart”. I tend to gravitate to the “hard way” with most of my endeavors. (My college friends are buckled over in laughter now).  I am surprised how well my knee performed without being supported by KT Tape.  The down hill portion of the day would prove a little more taxing though.  We can’t help but think how much fun…and faster…it would have been to make our “descent” in one of those human hamster balls.  Of course you would have to be strapped in like a fighter pilot, but what a ride! While the trek was strenuous like a 5 hour AMRAP (As Many Reps As Possible) of step ups and goblet squats, the views were spectacular! We caught glimpses of the island wildlife as well, and were treated to two island foxes scurry across our path, a solo bison and a deer (doe) trotting through the brush. (Sadly no pictures of the critters…so you’ll just have to use your imagination…or Google) 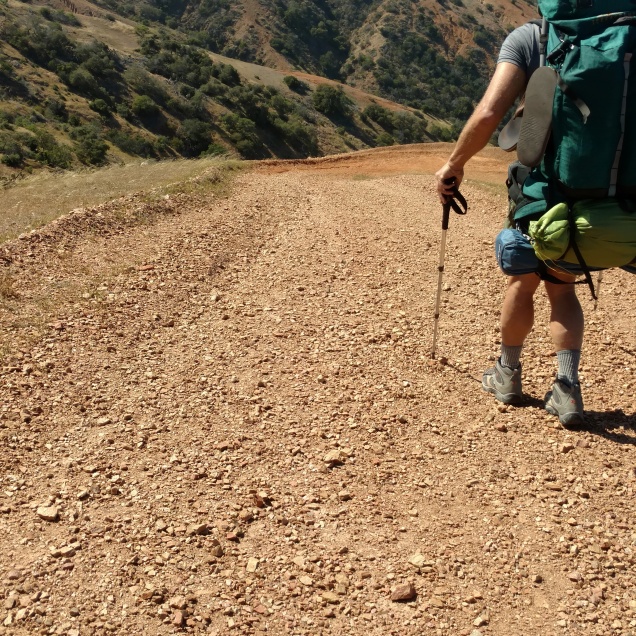 While it may not look like it, this grade pictured here is as close to 45 degrees as you can get 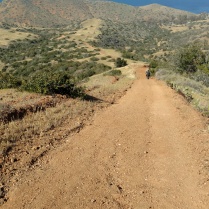 As we make our final descent into Parson’s Landing (in 4WD mode, always with 3 points of contact due to the plethora of square “marbles”), Paul and I reminisce about our 2012 experience at Parson’s. By this time, we were completely out of water. It had been 90+ degrees for a good part of the day with no shade to speak of. We reached the lockers and inserted the key into the corresponding locker. (At Two Harbors for $20, in addition to the cost of your campsite, you can purchase a “key” to a numbered locker that contains firewood and water. It seems ridiculously expensive, but Parson’s has no running water, nor is there access to drinking water along the 7 mile route whether you take the TCT proper, or road walk.) It would not open! WTF?! A bit of panic set in for two reasons. #1- I was on the verge of heat exhaustion and #2- we had absolutely no cell reception to even call 911 if we needed to. Paul inserted the key into another locker, and another, hoping beyond hope that it would open one of them… until, wait for it…the key gets stuck. Paul and I desperately try to extract the key which of course resulted in the key shearing off in the lock. Shit! The hamster wheels inside our brains start spinning.  Think.  Think. Okay, don’t panic…on our descent to Parson’s we had seen what looked like a “Boy Scout” camp down the road from Parson’s, and formulated a plan. The plan was that we would ask a couple of people who were already set up camping if we could get a liter or two from them, and then we would high tail it to the Boy Scout camp…thinking, they must have water or at least land line phone service. We then rounded the row of porta potties and lockers and discovered a partially used 2.5 gallon jug of water. We were in luck. We looked around, everyone in the campsites appeared to have their water. We each sucked down a liter, and surmised that we would have enough for dinner and the road walk back to Two Harbor…if we did it in the cool of the early morning.  Starlight Beach could wait for another time.  We attributed our find it to Divine Providence, and headed to our campsite.

Here we are 4 years later and we can’t help but wonder if the same thing will happen again…what are the chances, right? Ha, we are in luck! The key works and we grab our untapped 2.5 gallon bottle of water and bundle of firewood from the locker.

We survey the beach and find our designated “campsite”. It has a 3 foot tall rock wall that stretches about 10 feet, which is good cause here at Parson’s the West wind howls in the late afternoon. We set up our tents, which without the wind breaks, would have proved quite challenging, prepare our Mountain House dinners, skip the fire and are asleep before the sun sets fully.

“Tucked in” at Parson’s Landing