Before nodding off to sleep, we all agreed to NOT set wake up alarms.  We figured we had earned the right to sleep in.  When we did the PCT, Paul’s alarm would go off at 0530 each morning whether we (I) wanted to get up at that time or not.  I was having none of that this trip.  So guess what time I wake up…on my own no less?  0530!… Whilst Paul continues to softly snore (if that’s a thing). 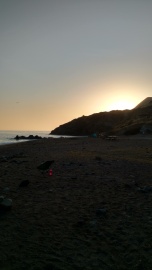 No matter, Jody and Brian are already up and moving about.  We rally for breakfast and pack up a bit, tossing our packs in our tents for a “quick” 4.62 mile slack pack to Starlight Beach.  We figure it will take us 4 hours (on the long side) to go there and back (9.24 miles in total). On the map it doesn’t look that hard, and the guide says we only gain 666 ft, so we grab some snacks and a liter of water each and head out.

Our plan is to check out Starlight Beach which is at the extreme west end if the island and head back.  Once we get back to Parson’s Landing, we will take an hour break or so, have lunch and the pack up for the 6.5 mile flat road walk back to Two Harbors for our next camp spot. Why would we do this, one might ask?  Well, 16 miles for a day (for us) isn’t that bad, but mostly because this is a popular camping destination with decent shore fishing, so it gets reserved often and fills quickly.  Had we realized that, we would have booked sooner and therefore booked a second night for Parson’s.  Word to the wise, if you plan to do the TCT, book two nights at Parson’s if you plan to go to Starlight, as there is no camping at Starlight Beach, or really anywhere to stealth camp from what we’ve read, and/or what we saw…but it can be done, if you are creative.  But because we had called an audible and were only able to reserve a few days in advance we were out of luck.   As it is, we will have a long day, but we’re not too concerned. 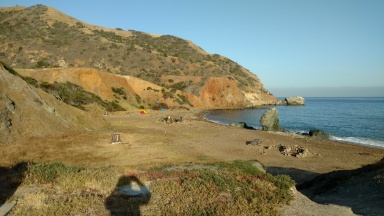 We can see that we have a hearty initial climb, but it looks like once we make the climb (around 600ft), the trail will/should hug the coast line then descend down to the beach.  The morning was not as brisk as we would have liked, but the skies were clear and the fresh sea air was invigorating.  A slight breeze wicked away our sweat as we hiked.

Glad we are slack-packing as this was far from “easy”

Not that “hard” was an understatement. Thank goodness we were slack packing it.  This trail had even more arduous ups and downs than the day’s previous route, which was rated as a Level III trail (Oh to be in  in awesome PCT hiking shape, like we were by Washington)  It wasn’t so much that the trail couldn’t make its mind up whether it was going up or down (only 666 Ft, my ass), but that the tread was exhausting mentally.  Especially when you were descending.  It was like we were on a very slow rickety roller coaster.  You had to concentrate where you put your next foot fall, and you could NOT let your mind or eyes wander (a feat that escapes me with regularity), unless of course you didn’t mind taking a grimy hard slip and fall. With each near fall, came the quickening of the heart rate and a bit of contortion to regain your balance, followed by shortness of breath and either a quick prayer of thanks, or an internal chiding of “See what happens when you lose focus!”…usually accented with a few “colorful” words. 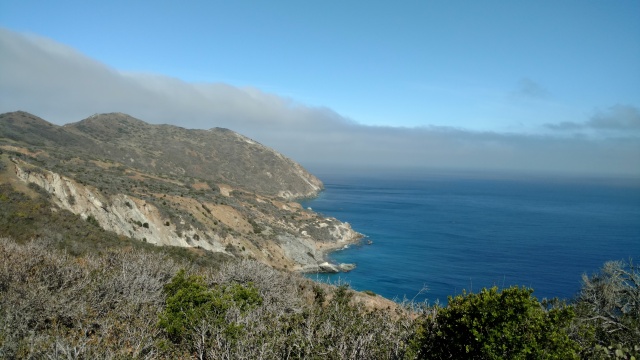 Starlight would be the far Cove.  You can see the trail near the upper left.  What you don’t see is a super steep climb to about the elevation you see of the “hill” above the trail in the upper left.  This would mean we “climb” up and then all the way down to the beach and  would back track this and the rest of the route we have already done back to Parson’s Landing…and another 6.5 miles from there.  No thank you.  Not today.

With Starlight Beach in view and one more mile to go, half of which was straight up with the other half straight down and therefore visa versa on the way back (no exaggeration) we figured we were “close enough”… we do live near the beach anyways.  If it were to have been our only trek for the day, I’m positive we would continued all the way to Starlight Beach proper, and not so bothered by the tread.  Around we turned and back to Parson’s we trudged…after a snack and doing our best not to make eye contact with each other secretly hoping none of us would make a “rally cry” and therefor goad each other into completing the trek to Starlight. 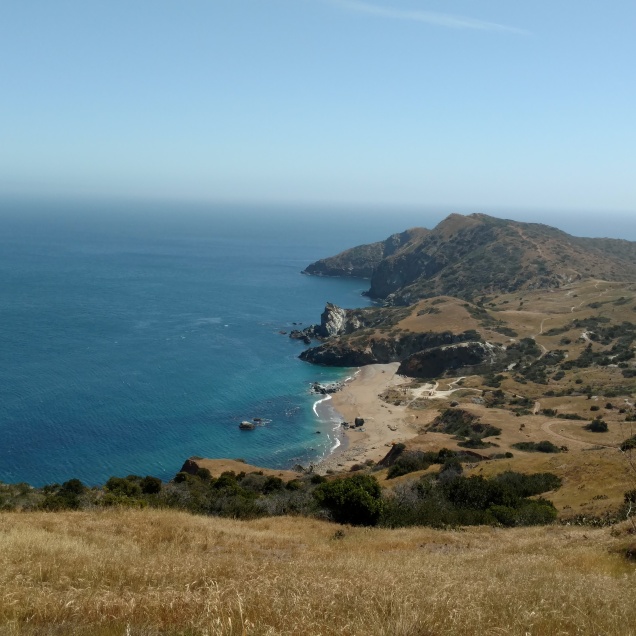 By now I had discovered that trying out new footwear was not such a great idea, as the shoes I was wearing had created a bruise on the top of my (right) foot where the forefoot of the shoe flexed.  Each step of the steep downs resulted in sharp pain, similar to that of a stress fracture.  Jody offered to switch shoes with me, but I declined namely because we didn’t have to have two ” broken ” people, and we didn’t have that much further to go.  (She has since earned the trail name of “SideKick”) Once back at our campsite, which took the full 4 hours, we slowly packed up and took a leisurely lunch.  All of us were worked and frankly were dreading the forced march back to Two Harbors.  We all agreed that in hindsight sight we would/should have planned this out better and spent the two nights at Parson’s Landing, allowing for proper recovery from our unique experience to Starlight.  Not to worry.  Brian reminded us there would be BEER when we got to Two Harbors.  With proper motivation, anything is possible!

Not gonna lie, those 6 miles (as Jody said), “Sucked!”  Road walking, is never really much fun, but add 9 previous miles of seriously challenging terrain, and your feet start talking to you!  Good thing the weather and scenery was superb. 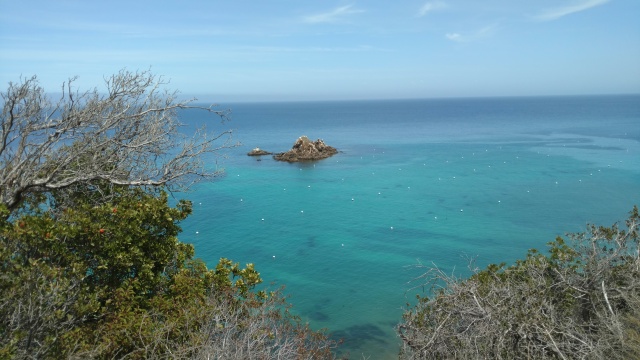 Were it not for the awesome views of secluded coves with bright blue clear water through which you see the bright orange Garibaldi fish (California’s State fish) our feet would have talked us into hitching…which we didn’t tell them was not an option as there is little to no traffic on this road.  Frankly if the road was not so high and there weren’t signs posted for the “Hikers to stay on the Road”, we would have detoured into one of said “private coves” and had ourselves a swim, or at least a foot soaking. 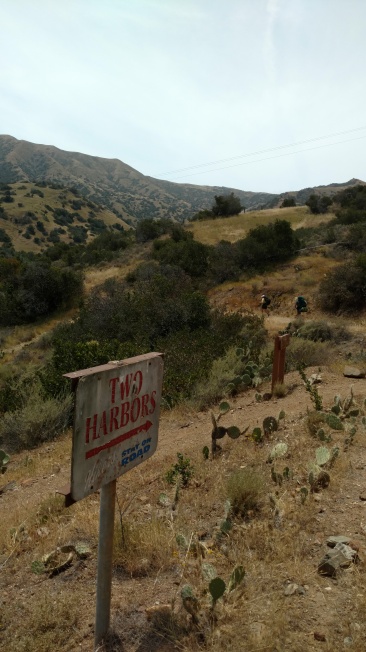 The closer we got, the louder became the siren call of Ice Cold Beer!  Our pace quickened like horses to the bar…n.  We can see where we want to be, but we must weave in and out of each cove, some deeper than others to reach our intended destination.  My feet are talking loudly to me now.  I have tightened and re-tightened my ill performing footwear several times by now, and am now sensing the infancy of a blister forming on the inside of my left heel.  I know this feeling, and know immediately the cause of the “hot spot”.  The thin siding of the insole has folded every so slightly upon itself and needs to be removed or smoothed over (with duct tape).  As I stop to make the repair in hopes of avoiding the full blossom of a blister, I remark to Paul, ‘I can’t believe these were so poorly designed’, to which he replies, “Are we talking your feet or the shoes?”  ‘Ha, Ha, real funny.  Probably both”, is my reply, as I apply duct-tape to the inside of my left shoe…just in case. We arrive in time for Happy Hour, which for us is aptly named and stay through dinner…at the bar, as we are not confident that if we walked to the campground and set up, that it would be “safe” to boil water and re-hydrate our dinners. 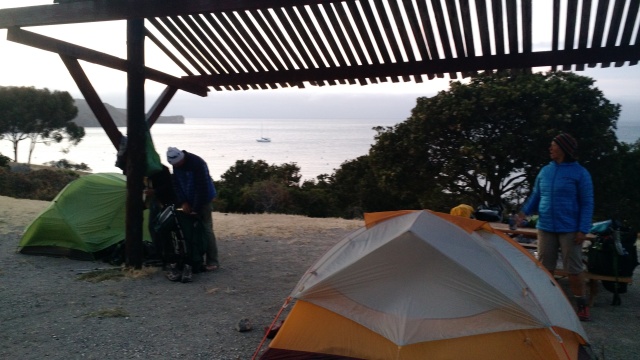 All set up at the Two Harbors Campground

Turns out it was a good idea, as somewhere along the way I lost a sock, and have absolutely no recollection of setting up our tent…even though I was there.  Damn you Brian!

2 Responses to Starlight and Beer