Prior to heading out onto The Camino, we are spending a few days in France getting acclimated.  Our travel agent at AAA recommended Toulouse, as it would be central to some places we want to see, all of which require some driving. Lucky for us the French drive on the same side of the road as us, and I know (or can read) enough french to understand the road signs.  Problem is, is that when you speak a little (un peu)good, they think you speak A LOT well.  This leads us to the issue with our GPS, it speaks French really fast, and between the four of us(sleep deprived, as it was difficult to get any quality sleep on the plane) we could not figure out how to navigate our GPS device and change the language, therefore yesterday’s route from the airport to our hotel took quite a bit longer both in time and distance.

This morning we are off to Carcassonne, a restored  medieval town on the UNESCO list (whc.UNESCO.org/en/list/345 ). First stop however is the Hertz office at the train station for some help resetting our GPS.  The attendant at Hertz told us there were two ways to fix it; either he teaches me french really quick, or he attempts to change the language on the device for us.  He has some difficulty navigating the device (and he speaks French), but eventually is able to change it to English with a British accent…good enough.  Off to Carcassonne we go on a similar but different version of yesterday’s “Mr. Toad’s Wild Ride”. The streets are narrow and the other drivers are impatient.  We are now glad we got the extra collision insurance as we are not all that confident we will be able to turn the car in, unscathed.  Once out of downtown Toulouse, which reminds me of a combination of San Francisco (without the hills) and New Orleans, we are flanked on either side of the highway with vast rolling fields of sunflowers and/or vineyards.  Traffic moves at fast and flowing pace and we learn quickly (sort of) that a vehicle behind you with a left turn signal blinking (and there’s no left turn to be made) means “Hey Stupid, Get Out of the Way!” 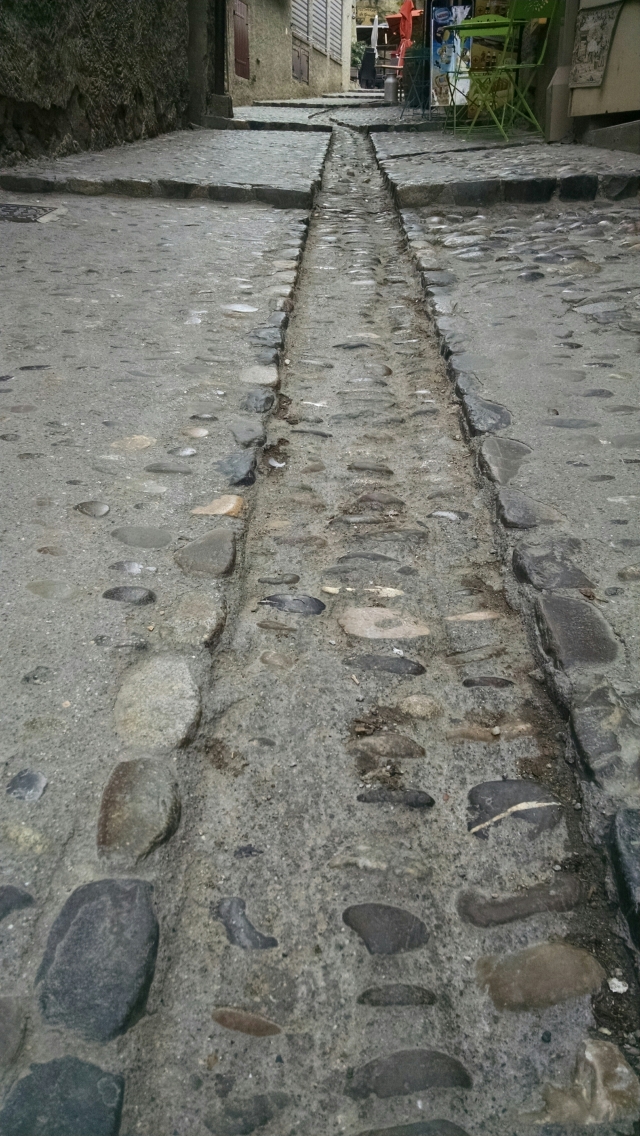 Once we reach the Historic Fortified City of Carcassonne, we park and wander the narrow cobblestoned streets which seem vaguely familiar (Monty Python’s Holy Grail, Robin Hood Men in Tights or Princess Bride) with several hundred other tourists.

The medieval city is a double walled fortress, with 53 towers, one of which “housed” the 13th century Catholic Inquisition.

The narrow rugged streets are still lined with merchants, however they are hocking modern day wares and delectables. 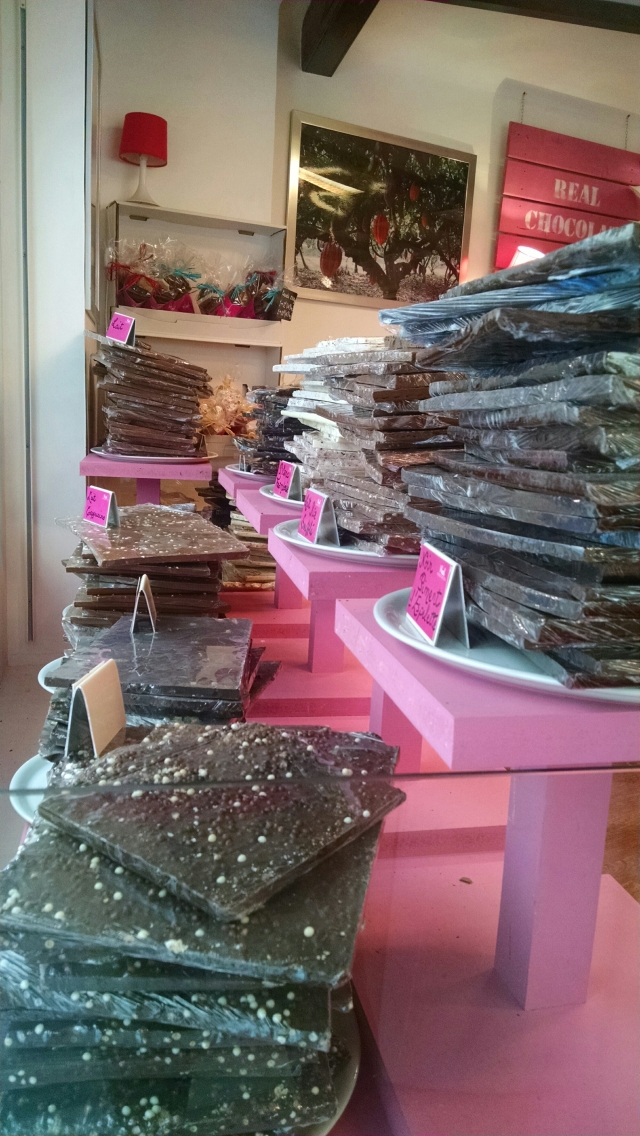 Sue and I consider a slab of chocolate, at a chocolatier, but the smell is enough to generate a sugar headache and a mild catatonic state. 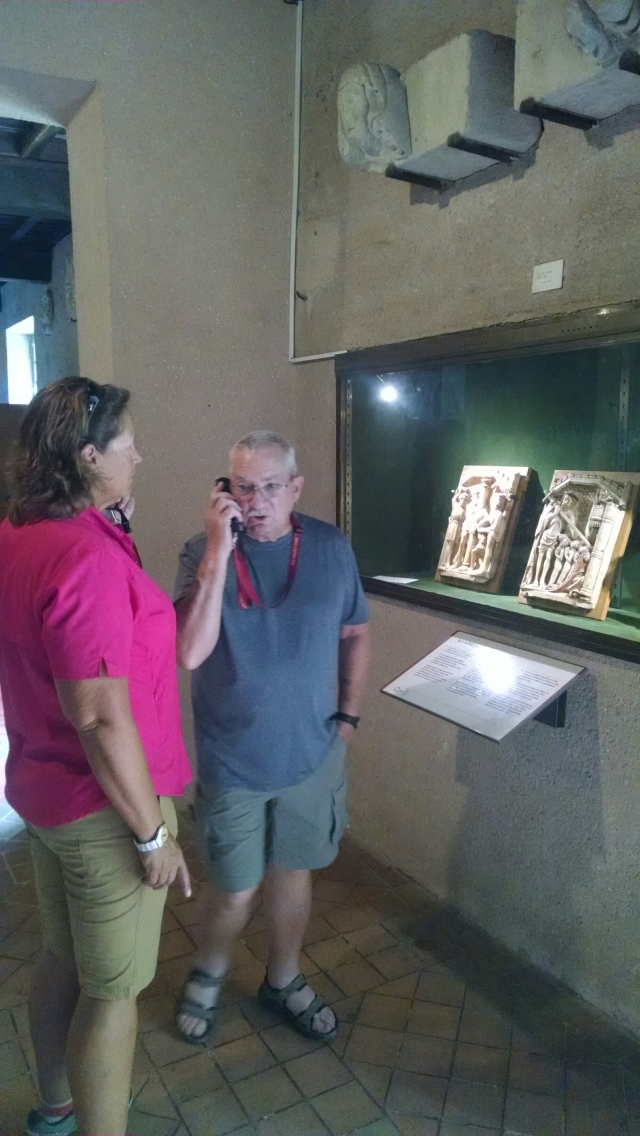 We take a self guided tour via audio guide of the painstakingly restored castle. 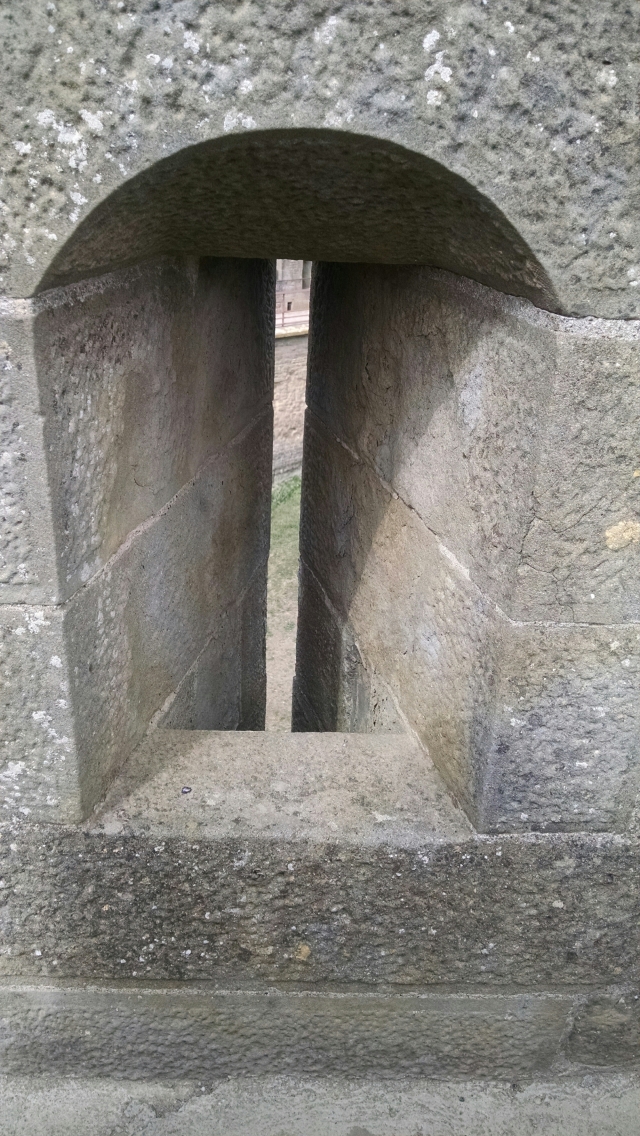 Here we learn the origin of “loophole” (holes in the castle walls from which arrows could be fired from a fortified position ), and milestone(s) (stones laid in the ground every 1472 feet to denote one Roman mile). 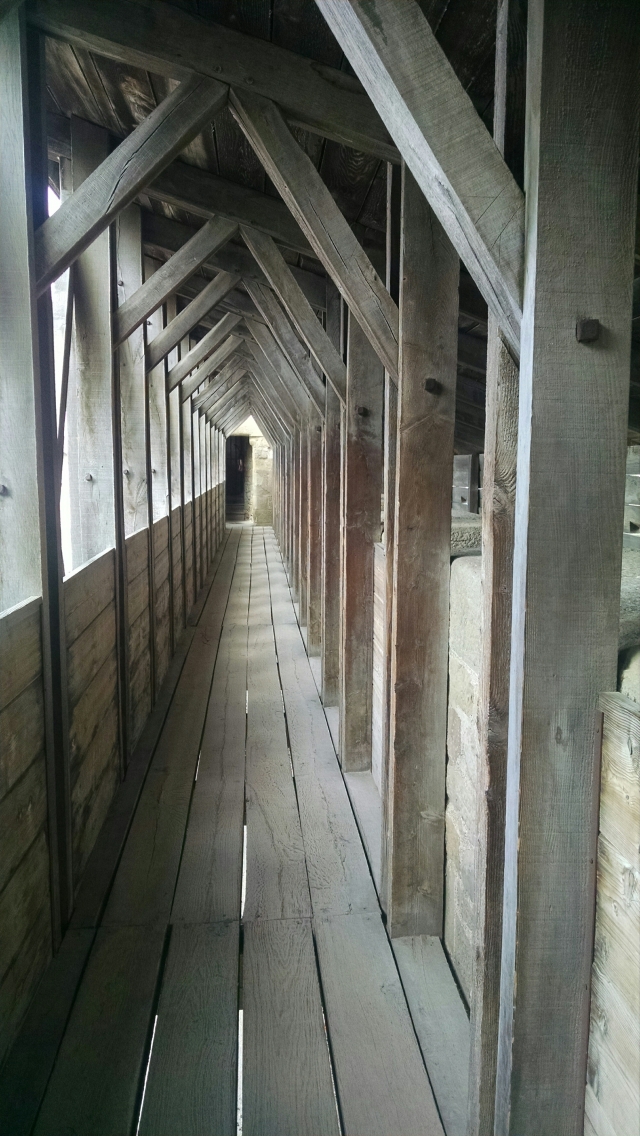 This is the first fortress know to use hoardings, which were hastily built prior to a siege upon the castle to better repel their attackers 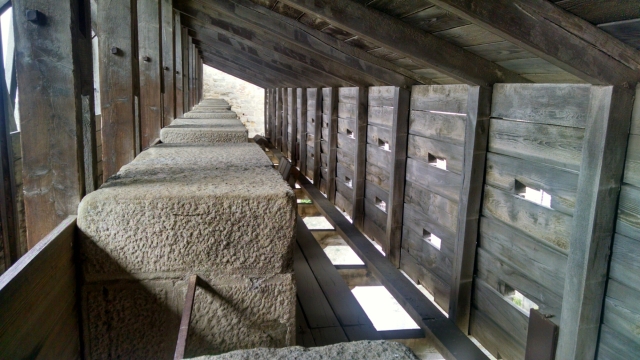 Soldiers would stand on the wooden planks, dropping rocks on the heads of their attackers and shoot arrows through the slits in the wooden facing. The use of hot boiling oil is myth as it was too valuable, and it ran the risk of burning the hoardings.

What is most amazing about this site is the history behind it and the remarkable foresight of Jean-Pierre Cros-Mayrevielle and Eugen-Emmanuel Viottet-le-Duc in the 18th century to save it from ordered destruction (via the French government) and interpret the remaining “ruins” thus beginning the restoration process for its preservation for enjoyment and examination for generations to come. 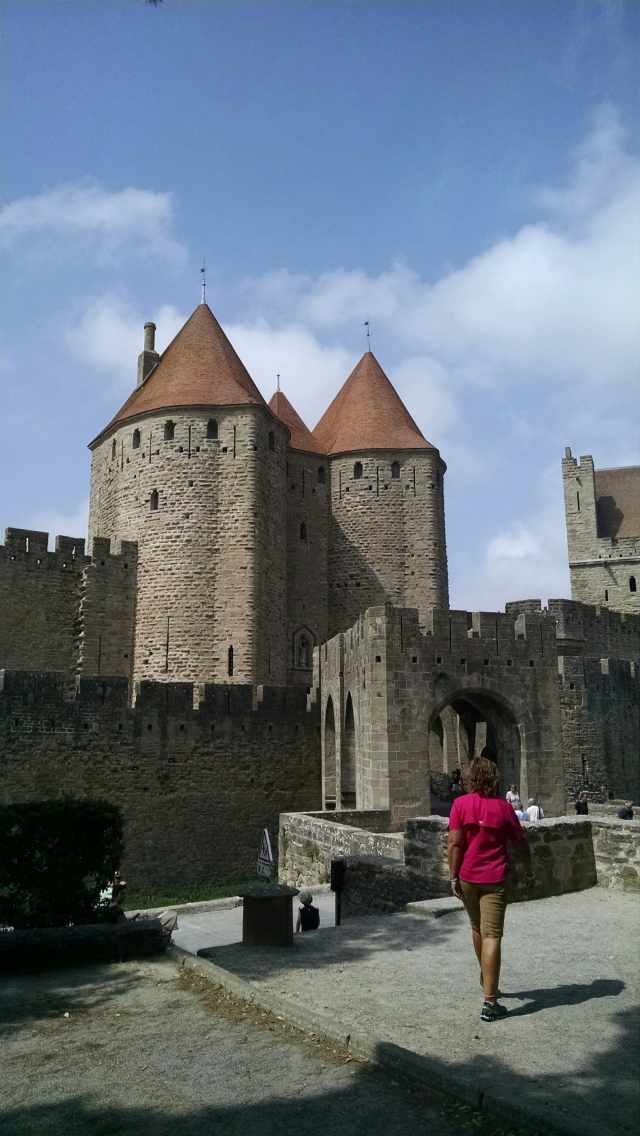 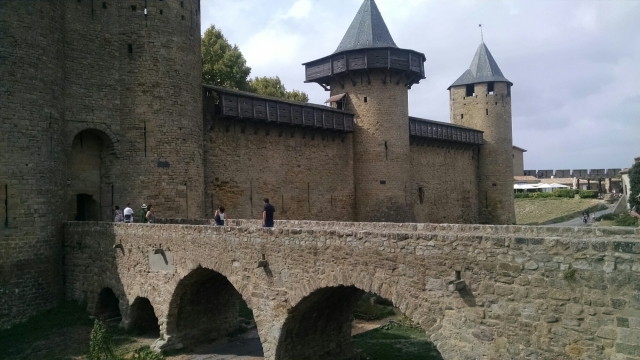 Located on the plains of Aude, in 6th century BC, the Romans recognized its strategic importance as it essentially overlooked the trade routes linking the Atlantic Ocean to the Mediterranean Sea and its proximity to the Pyrenees.  Needless to say, the control of this site changed hands many a time over the hundreds of years. 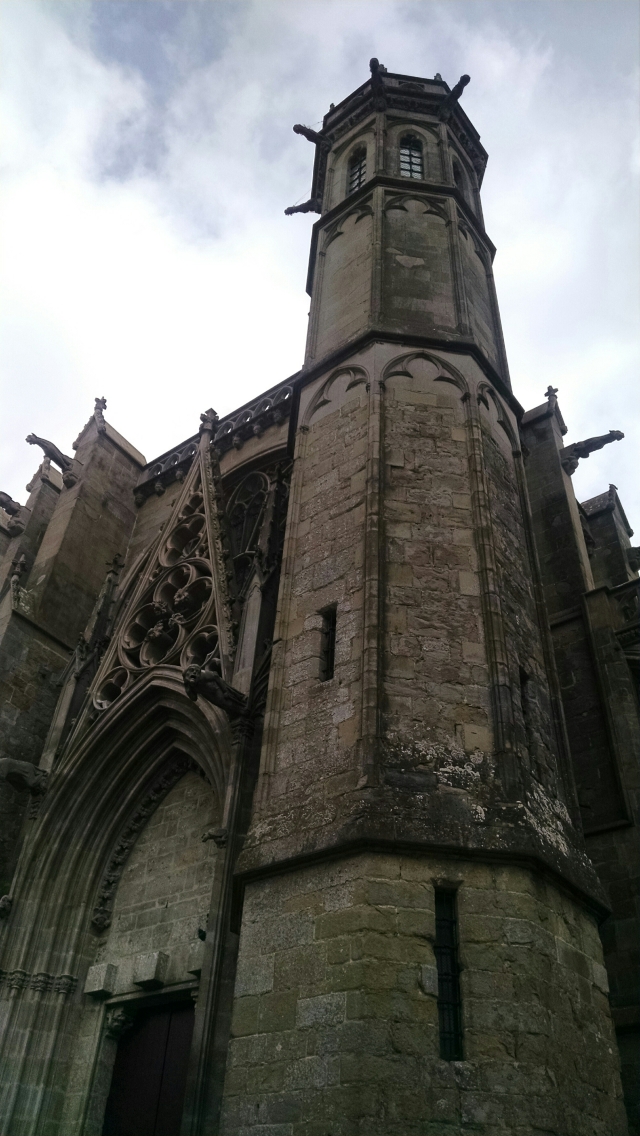 Inside the walls of this 3KM enclosed Fortress is the Cathedral St. Nazaire and St. Celse. It’s architecture is similar to Notre Dame, and the acoustics are heavenly

as demonstrated by a quartet of men who broke out into song while we were there. As the day progressed, so did the cloud cover and humidity. More than once it threatened to rain, but it waited until we were back in Toulouse about to eat dinner at a bistro on their sidewalk patio. As the skies opened up into a gusty torrential downpour, we were able to retreat inside. In no time, rivers of water rushed down the edges of the streets as large and crowded drops peppered the seats we previously occupied. Needless to say, we took our time and let out of the bistro back to our hotel just as the rain subsided into a gentle patter upon the granite lined sidewalks. 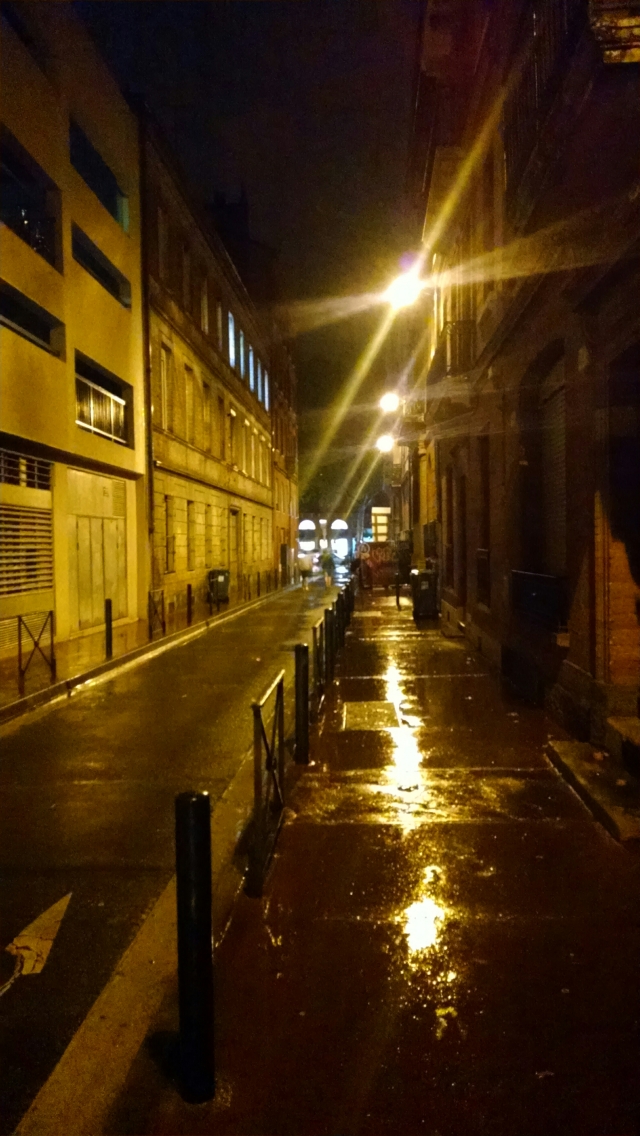