Today’s excursion into the countryside of France was to the lovely town of Albi, the birthplace of Toulouse-Lautrec, a famous French painter. 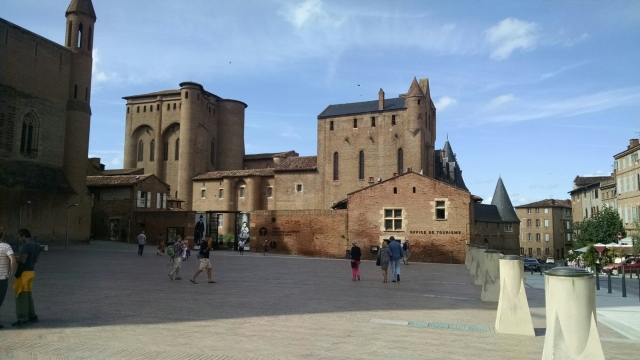 Here we tour the museum that houses a good portion of his work (to include 31 of his famous lithograph posters).

Adjacent to the museum is the Cathedral of Sainte Cecile, of which we tour as well.

To access the sites, which are also listed as World Heritage sites by UNESCO, we find parking across the river Tarn and walk over the Point Vieux (The Old Bridge), that was built of stone in 1035.

It was later widened with brick in the 1200’s to increase trade opportunities.  The thought of, and act of viewing, let alone traversing this bridge, first via automobile and then via foot was hard to process when you think about the “evolution” of the human condition.  The Cathedral of Sainte Cecile (patron saint of musicians) began its construction in 1282 following Pope Innocent III brutal crusade against Catharism (a dualistic Christian movement) seeded in and around the region of Albi.  The Cathedral, whose exterior design was of austere brick was to downplay and counteract the criticism of the Catholic Church’s extravagance and tendency toward flaunting opulence in the face of abject poverty, and its fortress like appearance was intended to convey the power and authority of the Catholic Church. 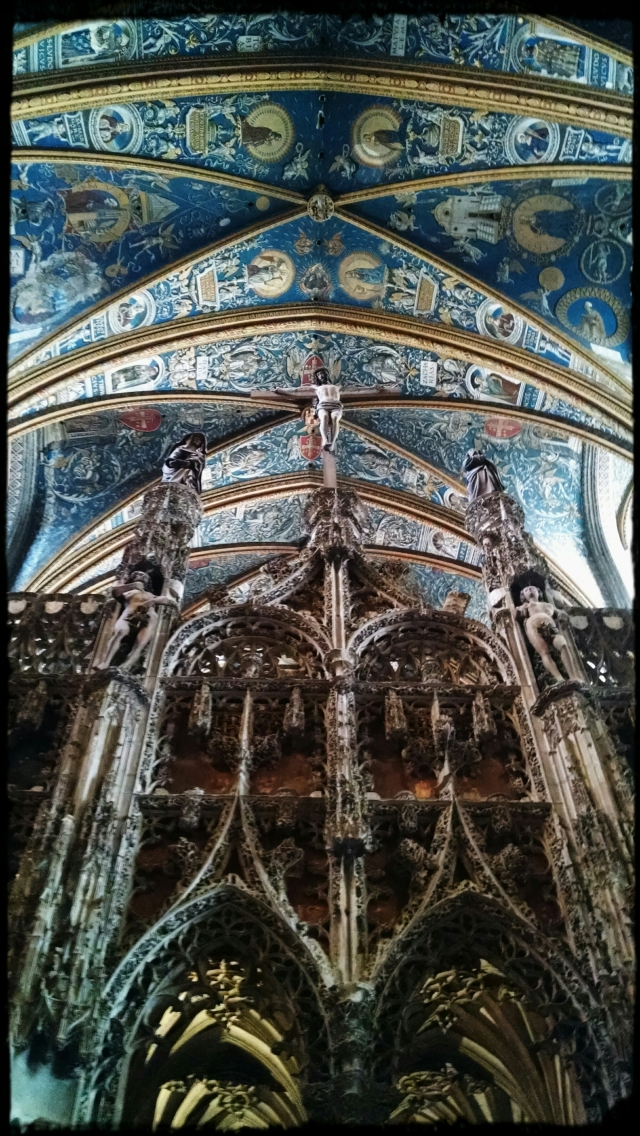 The interior is another story.  The interior face of the brick is plastered over and covered in symbolic frescos, intricate carved limestone and statues.  Another audio tour allows us to learn of the history, construction and interpretation of the intricate and elaborate symbolism of the art within.  Nothing, it appears, has been left to chance in this building. 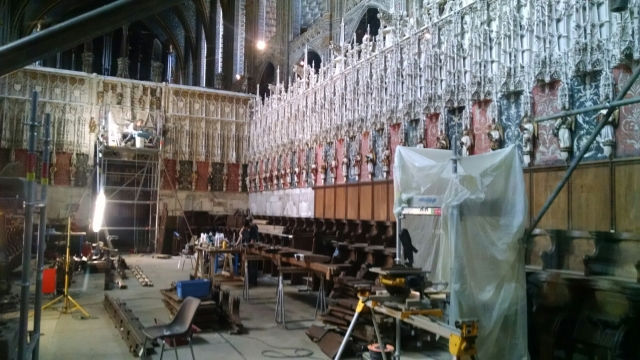 The chapel inside the Cathedral wherein only the Canons and clergy were originally allowed is actively being restored. 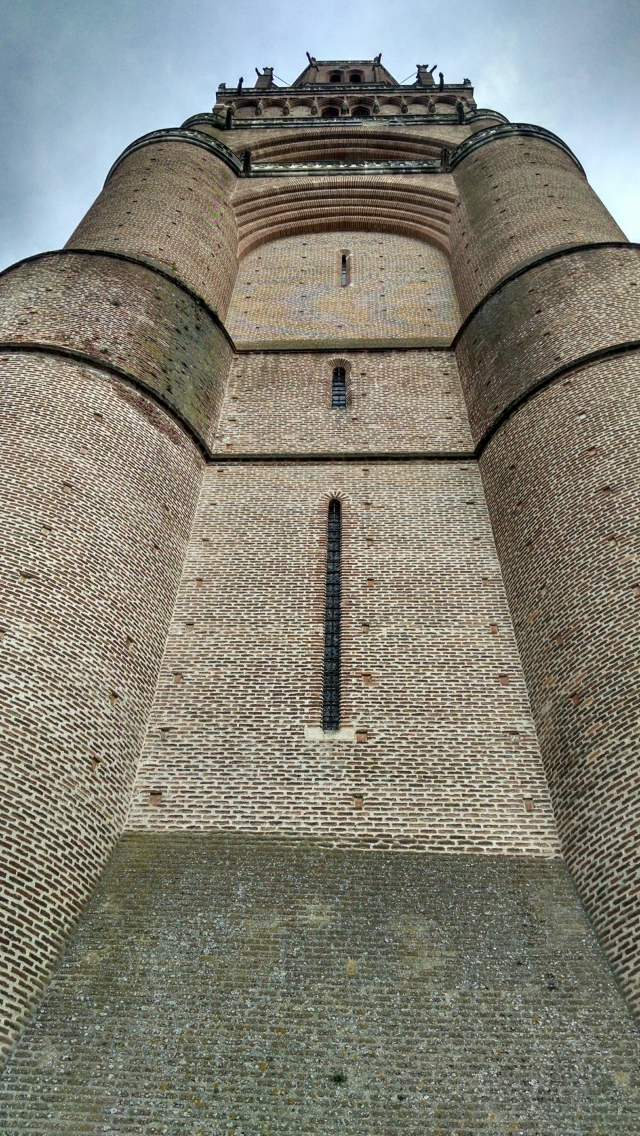 While it took just under 200 years to complete this Cathedral, it is built in the Southern Gothic Style and boast of a bell tower 78 meters tall. 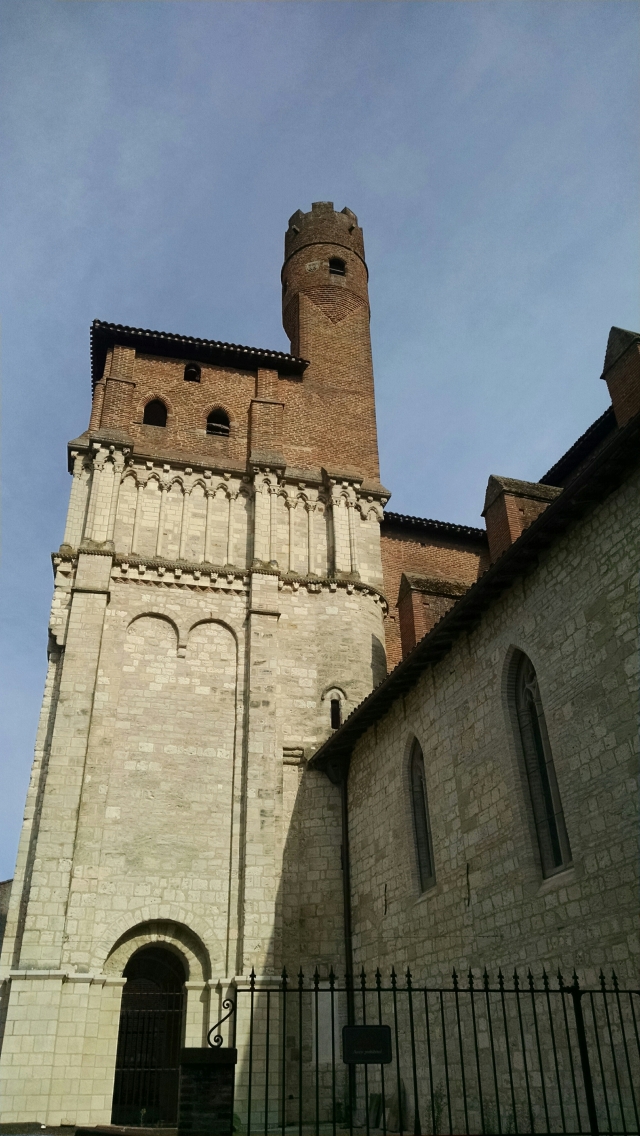 Nearby is the original and slightly older church (Saint Salvy) for the area and former College of the Canons.  It’s original construction was of stone then was later expanded with brick, due to the costs. 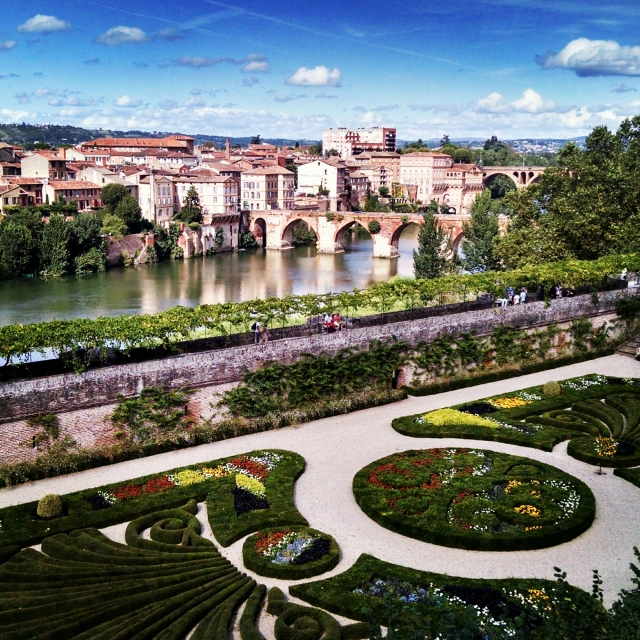 After a day of wandering about Albi we head back to Toulouse.

Okay, so we (as in Paul and I…it is”fend for your self night)spend our last evening at the Thirsty Monk (of which we’ve taken to calling the Drunken Monk…seems more appropriate) after getting a gyros at the nearby gyros place. Here we consume our gyros and have a drink, or two. It is Tuesday so naturally it’s whiskey night, which frankly is awesome…I like whiskey, and remarkably it is “Happy Hour” (930-1030 pm). Tonight’s whiskey is from Ireland of which the English barkeep says is horrible. So I ask him which he would recommend. He hands me a bottle of Japanese whiskey, places it on the bar and tells me to “take a snort”. I am amazed that he has said this, and both reluctantly and with great enthusiasm ( we are in another country) I raise the bottle to my mouth and take a “snort”, which in my world and Webster’s dictionary, is a drink or on this case a swig. This results on great uproar, as the British barkeep can not believe I have actually taken a drink from the bottle. Dude what do you expect, the term comes from your silly country, I think to myself. Paul is laughing hysterically, ” I can’t believe you just did that “, he chortles. The barkeep shrugs and shakes his head, ” This is the first time I’ve ever seen someone do that. Remarkable”. Paul quickly offers to buy the whole bottle. The barkeeps responds, “Don’t worry, no one saw anything” as he laughs. Well dipshit, I think, but say, ‘you told me to take a snort dude’. I meant smell it, he tells me. ‘Then you should have said that in French or English and it would have been fine’, I tell him. He pours our shots and we toss them back. When we get back into our hotel room we reflect on what happened, and laugh until our stomachs hurt. While it was somewhat embarrassing, at least I got a free drink. What an adventure…it’s barely week one. Now off to Lourdes.