A little snow will do ya

A steady and heavy rainfall all last night kept me tossing and turning, wondering if Tioga road would actually be opened today. Nothing left but to try it out. The skies were dark and moisture continued to fall from the sky. As we approached the hwy 120 turn off (that is Tioga rd.), a sign blinked, “Tioga road is open”. Phew! As we made our left turn, we could not help but notice all the snow. The road was wet with no chance of drying anytime soon. We watched as the outside temperature gauge dropped from 55° to 37°, and then began the sleet. The temperature then dropped to 34° and large flakes of snow began to fall. This is near end of May right? We of course know better than to pigeonhole weather into months these days as everything is so topsy turvy and predictably unpredictable. Mother Nature you have seemingly out done yourself for this adventure, and it hasn’t officially started yet. Excited, I have Paul pull over so I can get out and take a picture of the still ice covered lake, but more importantly, to catch a few flakes on my tongue. 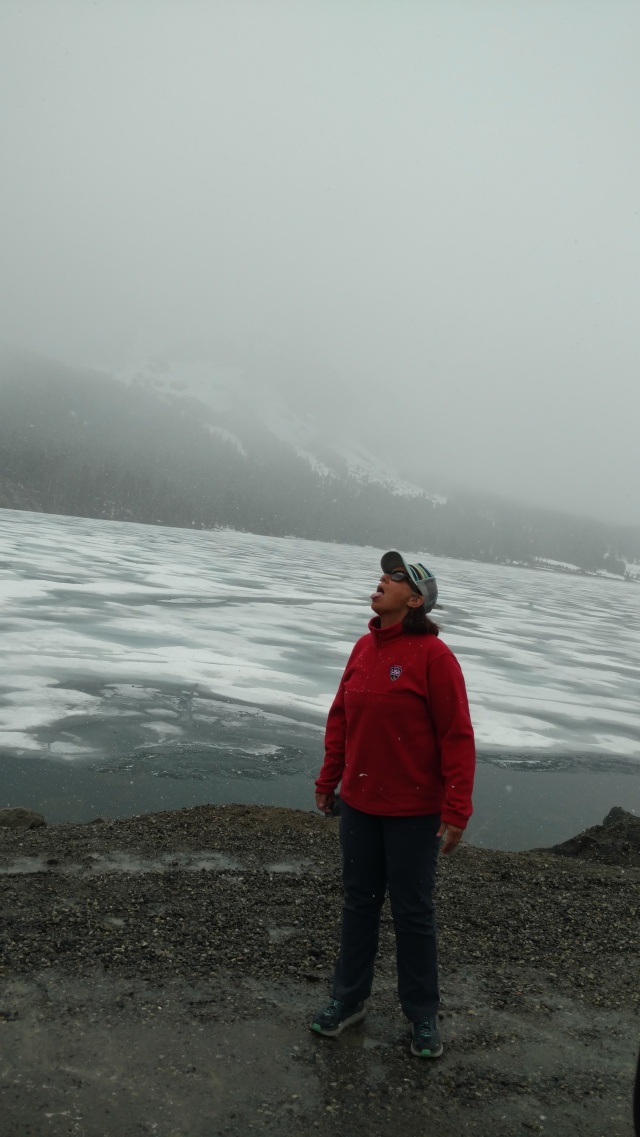 Had we not had a timeline to stick to, I would have lingered a bit more collecting snow on my tongue. Back into the car I hop. Snow flurries continue for a few miles and make way for crisp clear air, with snow topped mountains in the distance (of which we’ll be traversing over tomorrow) and vast green Meadows with lingering patches of snow. We drive by the Toulomne Meadows campground and store. Both are shuttered up, and far from opening. As we pass the Cathedral lake trail head, the skies clear a bit. The park is sparsely populated, but we know that will change once we get to the valley floor. As we reach Olmsted pass the clouds have dipped low, creating a dense fog that practically obscures the road, reminding me of my travels for work, up the I-5 in the suffocating tule fog. 45 minutes later we are nearing the valley floor. Cars and people everywhere. Half dome peaks out of the clouds and upper and lower Yosemite falls are roaring. We park our son’s truck in the Half Dome Village (formerly, Curry Village) and walk to the Yosemite Village area where Sandy and Steve have parked to take a short walk to lower Yosemite falls while we get everything situated. Rain begins to fall softly. People continue about their business. Thunder roars and the skies open up. As we have no way to avoid it, we walk briskly through the rain, playing “Marco Polo” with Sandy and Steve via texts, until we are reunited for yet another beer and the drive back to the house for final preparations.

Tomorrow we begin, and as luck would have it, the weather forecast show a day full of rain. Go figure. I am hoping that the rain will fall elsewhere.

Stay tuned…it may be a day or two for another post as we head into the Sierras.

2 Responses to A little snow will do ya