* Apologies for delay in the final post for this trip.  Home life sorta gets in the way and things get complicated…hence the draw for hiking long trails.

At 0615am Paul’s phone rings.  What?  Why is his phone ringing?  I thought it was off.  Paul answers, fearing the worst that it is one of our kids or my parents announcing some horrible incident.  Turns out that it is just SideKick.  What a relief!  “Are you guys up yet?” ‘Sure? Ah, we are now’.  Actually we were kind of awake and were quietly discussing the late arrival of our new “neighbors” in the next campsite around midnight.  Normally when one arrives late (especially several hours after “hiker midnight”) one sets up quietly.  That unfortunately was not the case.  Last night, a couple arrived into camp at nearly midnight and stomped around loudly until they found a place to set up…40 ft from us.  They then proceeded to talk loudly as they prepared their meal atop their site’s picnic table (I confirmed this when I got up to pee).  When I emerged from our tent they blinded me with their headlamps.  I responded with a welcoming gesture and then stepped off into the darkness to pee.  I am sure they were shocked that I had not waddled off to the porta potties to do my business, but why?  Before the phone call, we had heard SideKick and Mule Train talking and figured, as they are early risers, that they were up and in the process of preparing their breakfast.  While still inside our tent we begin to pack up.  No sense it going outside as we have been in this rodeo before.  Stay as dry as you can for as long as you can.  Nearly packed up, we peak outside.  No immediate threat of rain, but no SideKick or Mule Train.  Did they leave and get an early start?  We know they were looking forward to a hot shower and margaritas at Avalon.  We now notice that their tent is still up.  Turns out, they are still inside their tent. WTF?  I guess they have learned that there is no use in getting up and about, if we aren’t up and about. (I tend to, no matter what, be the last one ready to go)  Today is our final stretch of the TCT.  From Black Jack to Avalon, a 14 miler, which of course ends in beer and/or margaritas, and a late afternoon ferry ride home for a hot shower and soak in our Jacuzzi.  Although the opportunity to shower has presented itself at Two Harbors, Little Harbor (cold) and now Avalon, I refuse to shower until I get home.  For me a shower signifies the end of an adventure and/or is like a “reward”.  While it is not raining, the skies are grey and the clouds black with moisture.  We eat our remaining breakfast items and throw down a cup of “Joe”.  Nothing better than a hot cup of coffee to get the body moving…in more ways than one.  As it is a little chilly, I don my jacket, a hat and my gloves, knowing full well that all these items will be stripped off in short order.  Today I will require the use of my audio heroin (IPod), as the blister on the inside of my left heel (while drained) is sore and so is the top of my right foot.  It is a perfect distraction to get me through this trek.  Just as we start off, Paul hears the growl of plane’s engine approaching, and points in its direction.  We have just enough time to look overhead and see a light plane skimming above the tree tops, pull up abruptly and bank to the left, which was a good thing as the BlackJack mountain peak was clouded in on the right.  Phew!  That was close!  We can only assume that the pilot had just dropped below the cloud cover to land at the airport and discovered he dropped in just a little too soon.  I imagine if he has a change of pants, he will be using them after he lands. 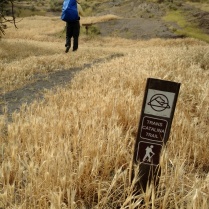 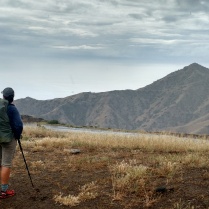 Onward we march and in two miles it is time for me to strip off the jacket, hat and gloves, and put it all away.  So far, so good…no rain.  Another 2 miles, and big fat drops of liquid sunshine begin to tap us on the head.  It looks like the clouds are moving quickly, like a film on fast-forward.  We figure this should be a quick dousing and decide to leave our umbrellas safely tucked under our pack covers.  The dousing is “quick”, and in short order we are soaked to the bone. Luckily it is not cold, even though there is a slight breeze.   We march on as the Southern California red clay sticks to the bottom of our shoes.  Layer upon layer builds, creating slick uneven platforms of what feels like cement on the bottoms of our shoes.  With each rock that is big and pointy enough, we do our best to slough off the build-up of gunk.  It is almost like a dance.  Step, step, step, side-step, scrape, scrape, scrape, scrape.  Step, step, step, side-step, scrape, scrape, scrape, scrape, scrape.  For the next 2 hours, it rains continually upon us.  I finally break out my umbrella, cause I just can’t take it anymore.  I am soaked through and through and I am getting cold.  It’s time to use the umbrella to at least walk myself dry…sort of.  The audio-heroin can only do so much.  The deployment of the umbrella works, and I am able to re-warm myself, and my attitude for that matter.  For those of you who know me, I hate getting wet, which seems funny seeing most of my athletic life was/is water sport related.  As a result of the rain, our photo inventory for the day is limited to the beginning and later part of our day’s trek. 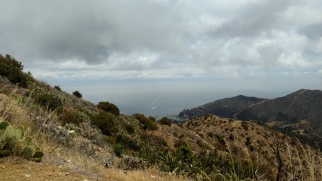 The views are amazing and our descent into Avalon is memorable.  We take the trail down into the Hermit Gulch campground as we are told by thru-hikers coming up from Hermit gulch that the remaining 3 miles of trail is closed for a downhill skateboard contest…darn!  We lunch in a park complete with a playground and take the time to dry ourselves out the rest of the way.  I’m not sure if Avalon seems bigger or smaller looking at it from above.  There is a wide firebreak that is terraced and rings around the outskirts of Avalon.  It looks like it could be made into an “X-Games” version of golf.  You would play from the bottom up, “chip” (with a driver) up onto the next terrace “green” all the way up to the look-out, and then back down again.  The balls would have to be neon or have tracking devices on them, cause I bet you would go through quite a few of them.  It would also have to be “speed” golf too, without carts, and you have to carry your own bag. 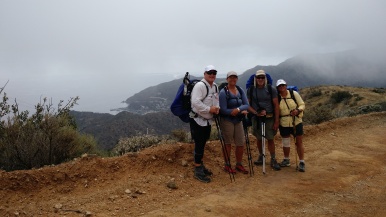 Once we get to the lookout we begin the 1.7 mile 1206 ft descent.  This reeks havoc on my “special” knee.  I know at some point it is going to “give”, and I am hoping that when it does, it will not include cactus.  About 2/3 of the way down the trail, my knee buckles and I go down in a heap.  Luckily I was able to kick my other leg out and land in the trail on my butt with a thud.  The other option was to fall forward to the outside of the trail…lined with cactus “K-Rail”.  A “thud” and a trip to my chiropractor was the better option.  I finally make it down to the bottom, and we regroup at the outskirts of the Herman Gulch campground.  The Ranger there asks if we plan on camping.  We tell him, ‘no’ that we are have just finished the TCT and are heading home on the next ferry.  He tells us “congratulations”, and that $1 tacos and “Happy Hour” is starting “early” at the Sand Trap (a 2 minute walk down the road).  We’re ON IT!  Two tacos and a beer later, it’s time to make our way to the ferry so we can store our packs.  SideKick and Mule Train will shower and go to their old favorite Antonio’s Pizzeria & Cabaret for pasta and a beer (or two).  We settle into El Galleon Restaurant for  some rock’n strong margaritas and nachos.    We catch up with SideKick and Mule Train, who are refreshed and nice smelling (unlike us) and share a beer.

Their next stop is Big Olaf’s for an ice cream.  I am now entertaining a serious case of the nods and go for a coffee before we board the ferry.  As it is Friday evening, the streets of Avalon are “crowded” with people wandering about.

The “Casino” in the background

Some are just starting their weekend getaway.  It is an eclectic crowd.  A wedding party.  A bachelor party crew. More than one bachelorette parties.  Lovers on a weekend getaway.  “Yachties” in town for dinner and drinks, and best of all a mess of Rugby players (Masters) for a what looks like the Master’s World event, as there are teams from all over the world.  There is going to be some serious drinking this weekend.  I reflect on my college water polo days and when our Santa Barbara tournament coincided with a college Rugby tournament. I think to myself, if Lori was here, could she still out-chug the rugby boys?  We watch as “old-er” rugby boys try and re-live their younger days.  They’re gonna hurt in the morning.  Finally it is time to board the ferry home.  It has been a great trip. It was nice sharing it with our good friends, SideKick and Mule Train. With the exception of snow, I think we had every type of weather.  Such is the way with playing outside for an extended amount of time.  Paul and I had wondered how hard it would be to slide back into backpacking, as The Camino de Santiago trip was really not a pack trip per se.  Not that hard really.  It was like riding a bike.  You’re a little wobbly at first, but muscle memory kicks in and soon you feel like a “Pro”.

Now it is time to get ready for Mount Whitney!