During the night it rained, and rained hard, but when we awake the only real evidence that it even rained was the large droplets of water resting on our rain flies.  Since Southern California has been plagued by drought, the predominantly parched earth just soaked it up like a crusty dry sponge. For the most part, the island of Catalina that has few natural springs, and most of the fresh water is from a desalination plant and piped across the island.  Today we were headed for a pit stop at the Catalina Airport for Buffalo Burgers and then onto our last night on Catalina, the Black Jack Campground located in a grove of pine trees which is unusual for this island desert. 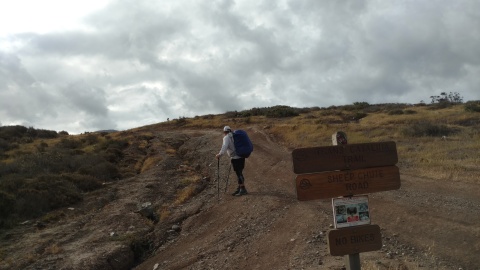 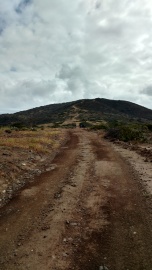 From Little Harbor campground we begin our upward ascent to lunch.  It is a bit overcast and muggy. We have donned our pack covers as “insurance” from what looks like possible rain.  The trail is wide and has a “gentle” incline compared to our three previous days on the Trans Catalina Trail.  By now the grey skies have lifted and we are treated to crystal clear view of the middle of the island.

On our right as we climb, we spy a small but thriving vineyard.  It is the Santa Catalina Island Vineyard.  It is part of the Rusack Winery based in Santa Barbara County.  What makes this Catalina Island vineyard special is the fact that their vines are direct descendants from remnants of a once thriving pre-prohibition era winery’s vineyard, once located on Santa Cruz Island, which is now part of the Channel Islands National Park. It seems that the National Parks System could/would not reconcile the revival of an 1800’s cultural heritage with the restoration of the natural flora and fauna of  Santa Cruz island , but luckily the Rusack Vineyards will at least be able to bottle a bit of that cultural heritage.  As we continue toward the airport we can see doe tracks across the trail, and several buffalo grazing on the side of a hill to our left.  We know that the buffalo roam “freely” on this part of the island and are a great draw for the Island Safari buses.  They are not native to the island, but 14 were brought over in 1924 for the shooting of the silent film, “The Vanishing American“, of which you can view on the Turner Classic Movies (TCM), this coming July 5,2016 at 8am!  After the shooting of the film, they left the buffalo on the island and their herd grew to around 600.  The herd has since been reduced to 150-200.  As of late, a number of female buffalo have now been “vaccinated” with a contraceptive of Porcine Zona Pellucida (PZP) to help further reduce the herd to maintain a manageable size for the health of the island and the buffalo themselves.  They say that the “Island Buffalo” are “significantly smaller than mainland” buffalo, but I don’t see it…unless of course the “mainland” buffalo are the size of a FedEx delivery van.  As it is, these creatures are about the size of a VW bus…with pointy horns!  We are happy to see them at a distance, and will be happy to keep it that way.  With the trail’s treadmill on full-tilt, we pause as a small white pick-up with the island Ranger passes us going in the opposite direction, no doubt making his daily rounds.  The boys are way ahead of SideKick and I,which is fine by us.  We have told them to not wait for us, but to order us a burger and beer when they get to the airport diner.  We get to a plateau and find the boys stopped.  ‘We told you not to wait for us’, we huff, catching our breath.  “We’re not”, replies Paul.  ‘Huh’?  Paul then places his hands with his index fingers extended to the side of his head…”Tatonka”, he says and motions to the road ahead of us.  In the middle of the road about 50 yards away stands a very large buffalo fully equipped with horns, obviously challenging us to a game of “chicken”.  We have firmly established that we are the “chickens”, so we wait.  Eventually the massive creature who appears to be wearing a snorkel (turns out there is a branch caught in his tangled coat of warm brown fur), exits our intended path and begins a slow stroll up the next hill.

We seize our chance and scramble off the trail a bit and down the hill (thinking that he may be slower running downhill than up…in the event he changes his mind and direction), to be as clear of the beast as possible.  He ambles out of sight and over the knoll, as a Safari Bus loaded with eager sight-seers approaches.  The driver stops and asks, “Have you seen any Buffalo?”.  “One is just over the next hill, about to start his shift”, replies SideKick, “matter of factly”.  The driver and a few of the occupants laugh heartily.  A few look perplexed, wondering if the buffalo aren’t as “wild” as the brochure describes them as.  We laugh and continue on, happy that the skies are still somewhat overcast, thus shading us from what could be a sweltering situation.  We reach the airport, and luxuriate in the modern bathroom facilities while our burgers cook.

Soap, running water and toilets that don’t have evidence of prior use are bonuses to the tasty beers and burgers that are served daily at this location.  Eventually it is time for us to finish the last 2 miles of the day’s trek to the Black Jack campground.

We descend from desert like conditions surrounding the airport (and most of the island for that matter) into a riparian wonderland of lush green vegetation and with its own buffalo grazing within feet of the single track trail at the bottom of the dry creek bed.

We hold our breath and sneak around the the seemingly content animal, trading places with each other as we each try and keep someone other than ourselves between us and the buffalo.  Out of the creek bed fissure we climb once more, crest a saddle just below the peak of Black Jack (home of a giant cell phone tower and radio repeaters) and make our way to the campground located in a dense grove of conifers. 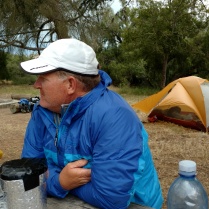 We locate our campsite (#8).  It appears to be a group site, and we are somewhat confused as to where we should pitch our tents, wondering if we are actually infringing on what most likely will be late arriving campers (as it is supposed to be fully booked tonight).  The weather report says to expect heavy rains replete with thunder and lightning.

A ginormous metal table resides in the middle of our campsite.  This should be interesting.  We pick our spots and set up.  It is actually nice to get to a destination with time to spare, before the nightly rituals of, set up, eat, pee and pass out (all generally within an hour of stopping).  This afternoon, like yesterday, we have plenty of time to lounge about, and even take a nap!  I burrow into my quilt and drift between napping and pecking away at the blog.  It feels so good to be horizontal…and warm.  We sort through our food and make sure to eat the heaviest items that are left, seeing tomorrow will be a 14 mile day…most likely in the rain.  As there is a “sink hole” of sorts in our site from a broken and exposed PVC pipe, we move the picnic table (not the ginormous metal one) over the top of it to avoid the tripping hazard.  We congratulate each other on our forethought and ingenuity, as we move the table and take our seats.  We muse however, that we should not be surprised if/when the “safely” covered hole  evolves into a “black hole”.  This means that all things we drop will gravitate to said hole.  We do our best not to prove our hypothesis, and fail miserably.  Said hole nearly swallowed two spoons, several dice and game pieces, a knife, clippers, a sandal and wayward food wrappers.  It made for great contortions and “quick” reactions.  As we played our nightly dice game, our “neighbors” in the next campsite return from their day hiking the Cottonwood Trail.  “Brutal”, but “Beautiful” was their description.  They will be taking the TCT to the airport and then road walking to Two Harbors for their ferry ride home to Long Beach tomorrow.  Several other thru-hikers arrive as well, having started in Avalon.  They arrive triumphant and relieved that the 14 (mostly up) miles, and first leg of their trek is completed.  They ask how the rest of the way will be for them.  ‘Much of the same’, we tell them, but shorter mileage from here on out.  So, pretty easy when you look at it that way.  Of course we did this whole thing backwards to most every other hiker we’ve met, but then what’s new?  Eventually the skies overhead darken and it becomes time to batten down the hatches and prepare for the worst.  The temperature drops.  A sure sign that precipitation is on the way.  We are spritzed a bit, but nothing that we would call “rain” befalls us prior to bedding down.  Paul and I fully expect our vestibule to fail if the rains, are as heavy as predicted seeing that it is held “closed” with two small pieces of Velcro.  We bring everything we want to stay dry into our tent, and are fully prepared to eat our breakfast and pack up in the comfort of our tent, in the event we awake to a downpour.  It is colder than the last 3 nights and I am happy I have brought my puffy pants and wool hat.  I am even more happy that I have brought my “travel pillow”, as normally my clothes bag wrapped in my jacket would serve as a “pillow”(which makes for a sparse pillow).  Of all the new items and changes I have made to my gear choices, this one has made the cut.  The weight is negligible to the comfort and good nights rest it achieves.  It’s a keeper.  On the other hand, the Petzl e+lite did not make the cut, and I will replace it with my tried and true Petzl Tikka XP.  The e+lite did not have enough lumens for me, it felt funny wearing it, and the ease and availability of finding replacement batteries is more  difficult than it needs to be.  Upon our return, my Salomon Wings Pro will be re-assigned to the pile of goods that will be headed to the Salvation Army, and our quilts will be traded out for our Western Mountaineering Alpinlite 20 degree bags for our Mt. Whitney trek in a couple weeks.  MountainHouse still rules, but candy-bars for “energy” will be traded out.  I found that since I have essentially been off processed foods and especially sugar, that each time I munched down a Snickers, a Twix or any high fructose sugary snack, I felt sick to my stomach.  Not so with my homemade trail mix and/or the LaraBars.  Additionally, I have discovered a new flavor of Kettle Chips…Jalapeno Cheddar!  Sorry Salt N Vinegar, you’ve been replaced!   I make these mental notes as I slowly nod off.