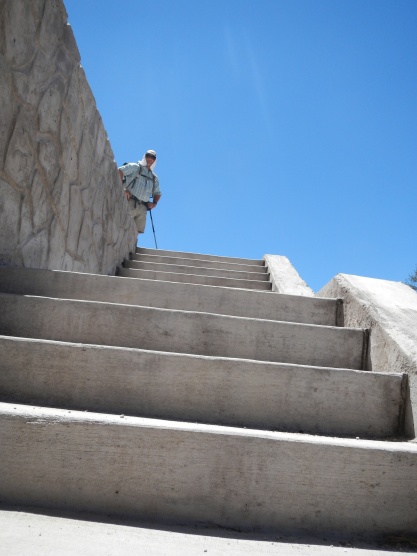 Kingsbury Crossing at the 207

Damn nature sounds at 0430 in the morning.  I know we need to be up and moving by 0530, but Really?  This one (invisible) bird, tweeeet-chirp-tweeet was like Chinese water torture. 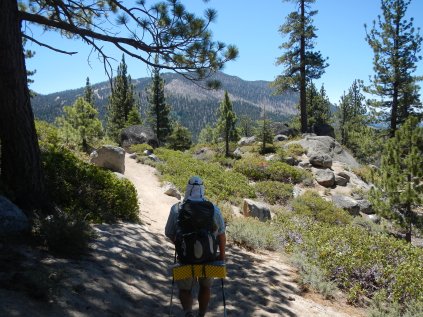 Today we learned that we are not the only ones that can’t estimate mileage.  Every time we asked a day-hiker that was coming in the opposite direction how far the trail head was, or where they saw the last water, it was always “not far” or “maybe 2 miles”.  We’d ask them where they came from and how the trail was.  They’d reply, “Star Lake” or “Big Meadows”, “a few ups and downs”…”it’s not bad”.  LIARS!  The only guy who gave us accurate information today (because the guidebook sucks) was a former PCT (2010) hiker, and it was where to find water.  At one point we jokingly considered whether G2 and a few Emergen-Cs  would make it easier to choke down urine…as it was coming to that.  This section is hot and dry.  Luckily before we parted ways with Desk Jockey, who was going to Kingsbury North for resupply, I had grabbed a liter of water from him. 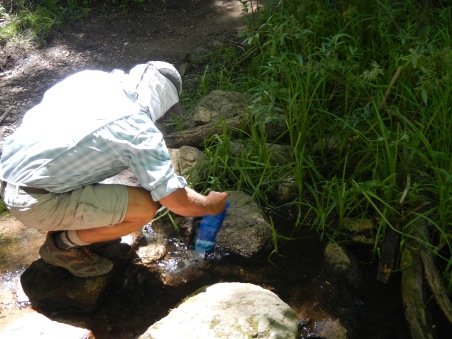 Where we should have fully “cameled up”

And, as it seemed like a “good idea”, we decided to refill a liter bottle with water from a creek we had crossed that was not on our map, as it was sooo HOT and we weren’t sure how much farther (2 or 6 miles) the creek we had planned on fully cameling up at was, as our mileage indicator was completely FUBAR!  Four miles later and now down to only 2 liters between us, we realized we read the map wrong and the creek we had gotten only 1 liter of water from, was the creek we were supposed to camel up at.  OOOPS!…and so began the brief but pronounced temporary melt-down…and the day started so well, HA! (See lesson 1) We should have known better.  Once we stopped and got out of the sun and regrouped and refueled, things got a little better.  This is when, and by chance (or divine intervention), trail magic occurred.  A local day hiker was trail blazing down a hill beneath which we had plopped ourselves trying to decide whether to go back to the water we knew some 4 miles back, or continue on and see what we find.  We exchanged greetings, and talked about the trail and the fact he had done the PCT in 2010, but had to drop out around Mt. Lassen due to the fires and how he would like to finish it someday.  More importantly though, he gave us accurate information of where to find water (just under “Mott Run” of the Heavenly Ski Area).  He told us that the source is spring fed and flows just enough to fill a bottle. 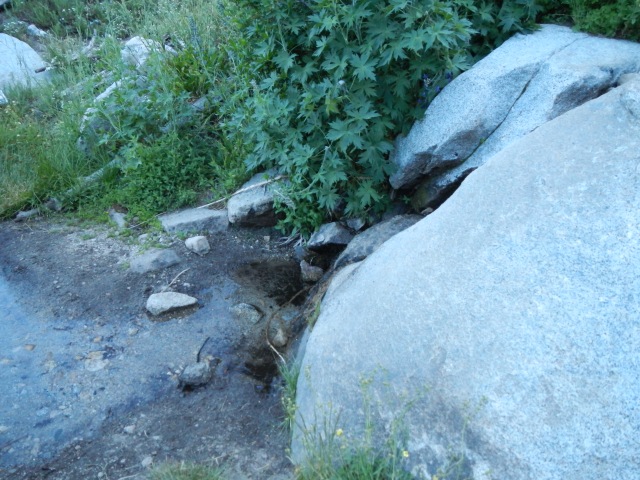 This spring was a God send, and guarded by mosquitoes a-plenty!

It was about “2miles” away, and in the direction we were headed.  Yeah!  We can do another 2 miles on 2 liters of water.  It turned out to be 3 1/2 miles, but it was better than back tracking 5 miles!

Our final destination ended up being Monument Peak, with the day’s total mileage being 18 miles.  The day of course ended as it began, Uphill.  But the sights and vistas seen were spectacular.  We overlooked the Carson Valley, saw the largest Red Fir tree ever (and where the Keebler Elves live…and bake their cookies), experienced the Heavenly Ski Area naked (no snow), and ran into a crazy mountain biker boulder hopping down the steep and narrow trail (with 1000 ft drops) as we were climbing up. 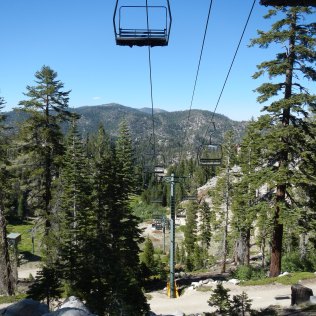 Keebler Elf House…door on the right

Steep climb and drop up to Monument Peak

At the “top”, looking over Carson Valley 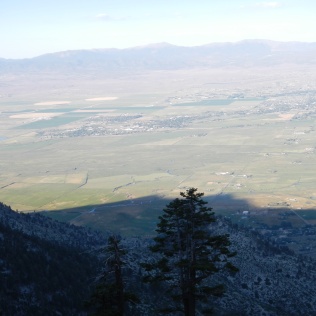 This day was certainly filled with diversity, and mishap.  An additional lesson was learned today.  We can work through a melt down and come out on the positive side…at least we didn’t have to carry all that water uphill for 6 miles!