3.  Water Bladders (internal and external) are not easy to regulate.

The trail out of the Marlett Lake campground seemed to go on forever.  Luckily it wasn’t that strenuous and had great vista views of Lake Tahoe, and of course, Marlett Lake.  Today apparently my husband discovered how truly BAD I smell when we got together to take a picture, via our new hiking buddy Desk Jockey.(Can’t find the picture)  As we smooshed together for the photo op, Paul exclaimed, “Geez you STINK!”.  In my mind I was thinking, you’re not a stinking rose either, and…you just noticed?  I can barely stand myself!  I must have now reached a new height of stankiness.  Since our son played ice hockey and we were both familiar with the horrible stench of his gear (even when “washed”), I asked him to rate my hiker stench.  Apparently the stench-o-meter had me between the stench of our son’s collective gear bag and his gloves (of which are vomit inducing)…and this was only Day 4!  As we continued on our way, we have noticed a pronounced lack of game tracks traversing the TRT and dirt roads.  It wasn’t until last evening while en route to the campground, that we spied our first actual animal life in the form of several mule deer grazing in the bitter brush.  There appears to be plenty of vegetation and food sources, but then we are in fairly close proximity to “civilization”, so that might have something to do with it.  An interesting event occurred about mid day, as we had just “parked” ourselves on our custom cut Z-Pads up against a giant granite boulder to have a snack and air out our feet.  A day hiker and his dog came quickly striding up the trail towards us, a little winded and wide-eyed.  He asked if we had seen the Bears!  He described one as being “really BIG” coming up from Marlett lake.  (Note to self – don’t ever camp at Marlett Lake…proper). Unfazed, we shrugged and said, “No”., to which he looked at us like we were blind and/or clueless and said, “okay then…well just be careful”, and hurried on his way toward Spooner Summit.  Considering Paul’s remark about my hiker stench, we surmised that collectively (as he doesn’t really smell much better…well okay, maybe a little, but I’m done with trying to stay “clean”) we must smell much worse than the bear(s), which in the bear world means that we must be one “bad ass” bear (us).  Therefor once those bears got a whiff of us as we passed by them, they hid out until we passed, not wanting an encounter with a bigger/tougher bear.  And frankly, we are good with that.

As the day went on, the mercury began to rise to a near unbearable level, so much so that we unknowingly had sucked our water bladders dry, with 2 more miles till Spooner Summit.  It’s like that moment when you’re scuba diving, and you realize that your regulator is not failing, you are just out of air.  I guess you should have paid better attention to your gauges now right?…not that I’ve ever done that (more than once).  It’s not so much a feeling of panic, but of “what idiots”…how’d we turn into “those people”, we used to rescue “those people”.  Luckily I had squirreled away 1/2 liter of water in my G2 bottle and we rationed that until we got to Spooner Summit where we were told there was water and a bathroom by day-hikers.  I am not sure of which I was more excited.  The thought of water or an actual toilet.  Having had to pee like a race horse for the last 2 miles, I’ll say the bathroom wins it.  When we arrived at Spooner Summit, the day-hikers had it half right.  There was a bathroom, but NO WATER!  Considering the fact that I had to pee so bad (Paul had free use of nearby trees and shrubbery), we were pretty confident that we were appropriately hydrated.  When we arrived at Spooner Summit, we had an hour to spare before our trail angels were scheduled to arrive with our 3 day resupply.  This allowed us #1- to pee, of which I barely made it for the bathroom only served to increase the urgency, and of course “women’s” restroom sign made it even worse,  #2 – air our feet out, #3 – go through our gear and #4 – plan out the rest of the day(s) on our map.  As we were waiting for our resupply, Desk Jockey pulled up with his trail angel.  He was heading in the same direction with his final stop being Echo Summit (where he started in the first place).  He asked us how far we were going to go.  We told him that our destination for the day was another 6 miles to South Camp Peak.  He thought he was only going to get in 3 miles before setting up camp as he has two bad knees and the uphills always get to him.  We told him we would see him on our way up.  Once resupplied we headed on our way an hour and a half later.  On our way up we met a mountain biker headed down who told us “our buddy” was waiting for us on a bench”, near the top.  Apparently near the top of the 5 mile 1800ft climb there is a bench.  A bench on the trail, finally…what a concept!  The “bench” as it turns out was a log, but Desk Jockey had gotten about 4 miles and was within 1.5 – 2 miles to the top.  Once we met up,we were able to talk him into continuing another 2 miles, as he had been able to rest for about an hour.

We ended up finding a great spot to camp. It was flat, out of the wind, and allowed us to enjoy an amazing sunset over Tahoe City. 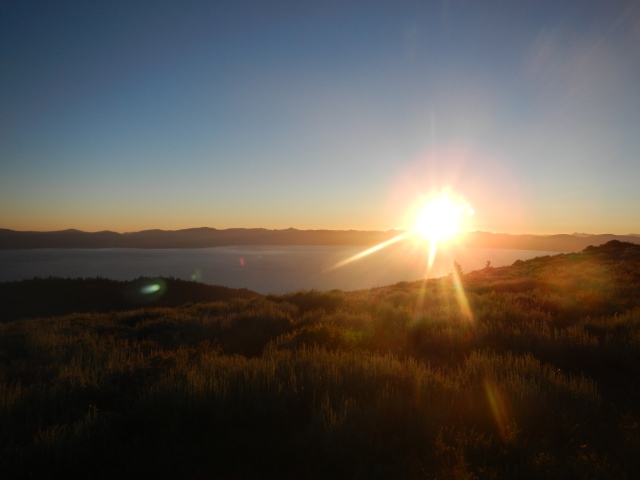