We find it funny that people get up early, rustle in their bags all ready to go and then sit in the bar (if the albergue serves food) and eat a whole breakfast.  We, on the other hand get up and get moving.  The morning is the best part of the day for us as we generally have the trail to ourselves. Today was the “big climb” that everyone has been fretting about to Cruz de Ferro (Iron Cross) that tradition holds that peregrinos leave a stone or memento that represents a burden, heartache or a prayer for a loved one that you wish to leave at the cross.  It is a symbolic gesture.  We rise before day break (as usual) and walk out of town in the dark under the glimmer of a once full moon.  The brightest stars are still visible against the dark blue sky.  In the distance on the ridgeline lights blink where wind turbines live.  We walk alone in the quiet of the morning.

This is our favorite part of the day.  On a “crowded” trail we have this time to ourselves and we relish this time. 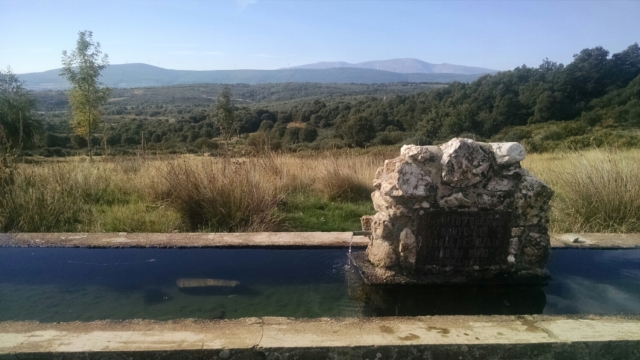 Today’s walk actually feels like a hike, rather than a walk from town to town.  We walk through terrain that reminded us of the Sierra Buttes and/or foothills of Central California.  We walk and talk, and trail delirium apparently has set in.  As we hunt for trail signs, which is anything yellow, we realize that frankly any signs of toilet paper are also a sure sign you are on the Camino.  The concept of “leave no trace” has not arrived in Spain.   We then began to wonder why toilet paper is white.  Is it because poop is brown?  What if poop was white?  Would toilet paper be brown?  And so went the morning.

When we finally reach Cruz de Ferro it is nothing like we thought it would be.  We knew that a road went up/by it, but we never thought the buses would park right next to it, or people would loiter atop it posing for pictures like they’ve climbed half dome or something.  The vibe was far from serene or reverent.  We rested a bit and moved on.

From here was supposed to a steep descent, however there was yet another climb, followed of course by a seriously steep descent that our toes and my knee made sure to complain about.  Once we reached El Acebo, we checked into the municipal albergue who thankfully had beds left.  This albergue had no fee, but relies on donations to continue to operate.  They also serve a pilgrim’s dinner. We also ran into Dave who we have been leap frogging with for sometime. Dave’s from Canada, New Brunswick exactly…eh! His daughter hiked the PCT this past year and gave him her gear to use and a 5 minute hiking lecture before he left…most likely ending with the words “good luck”.

Our dinner was prepared by the volunteer, and the serving and dishes were done by the peregrinos. 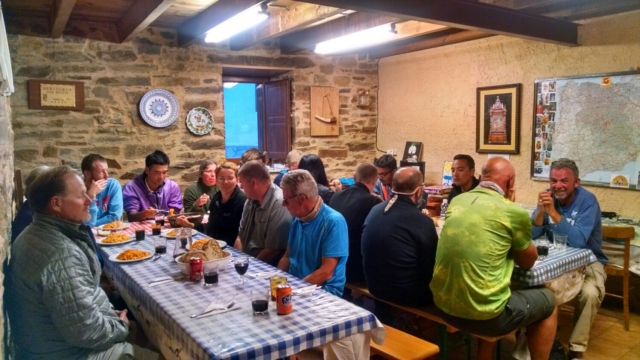 This gave all 23 peregrinos a chance to meet each other and converse in broken languages. After dinner most people brushed their teeth and went to bed quickly as the water in this village is shut off at 9pm.