Life as a Movie

Up early and the courtyard of the albergue is wet. Time to finally dig out the rain gear we have been carrying, and our pack covers for good measure. The night before was the first day of a three day festival in the town of Viana.  The evening before as we wandered the streets foraging for a pelegrino dinner…of rabbit. 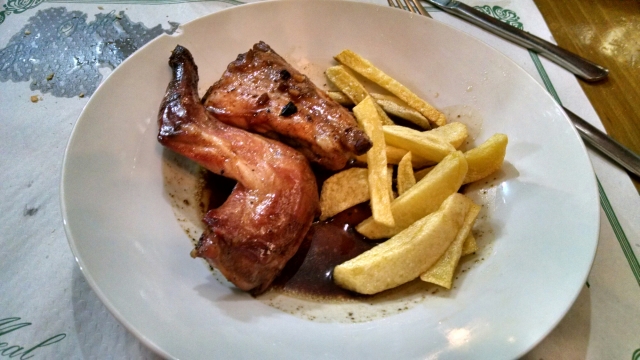 We came upon a corral with young boys mock bull fighting with wheeled “bulls”. 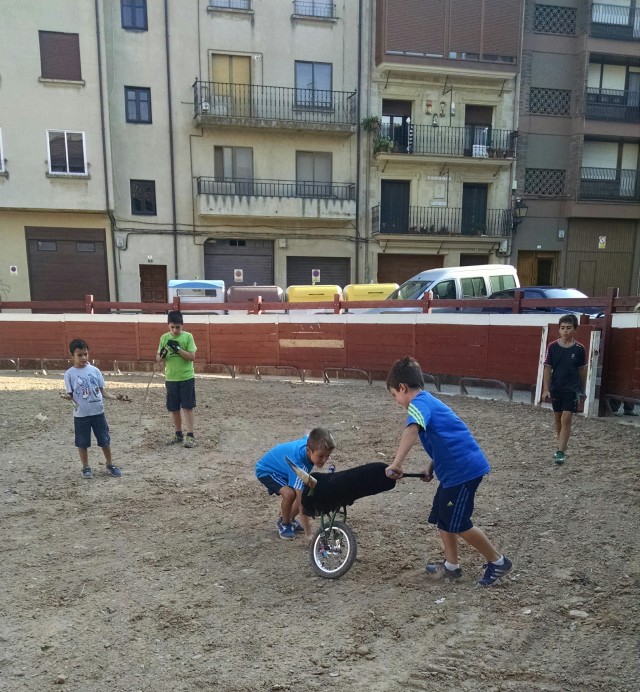 Paul hamming it up with the kids. 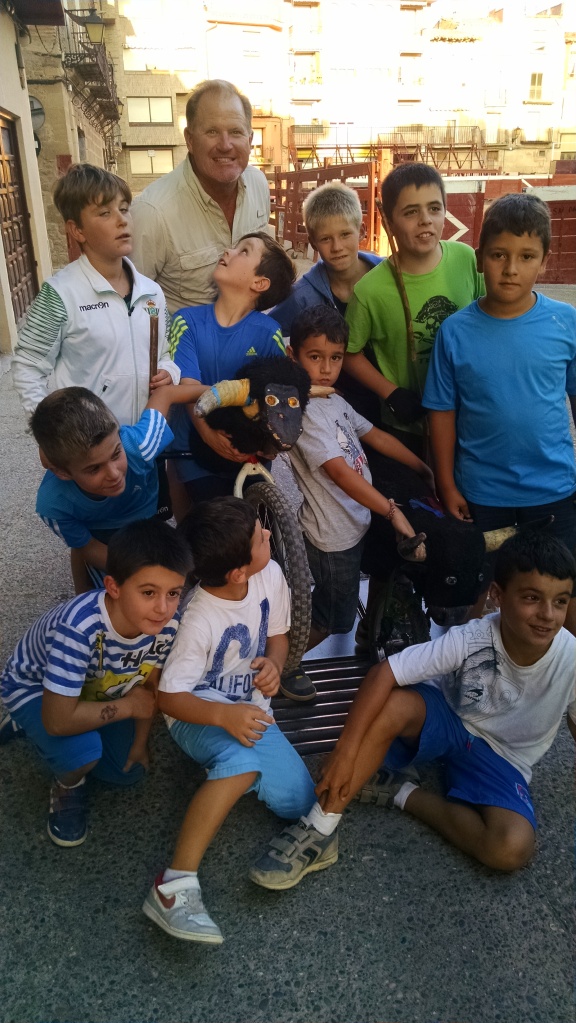 We attempt to check out the church, but find it’s massive doors locked. 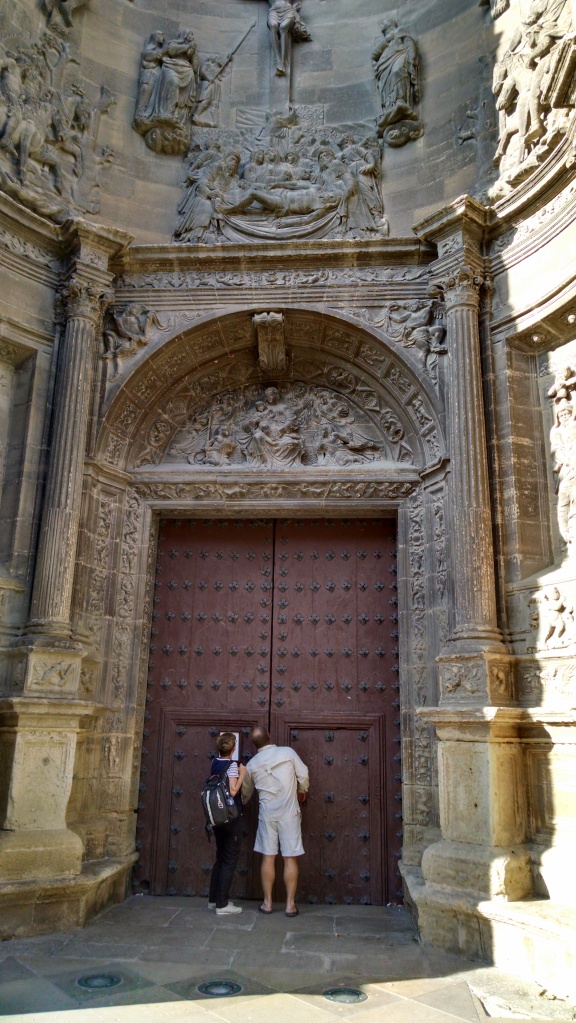 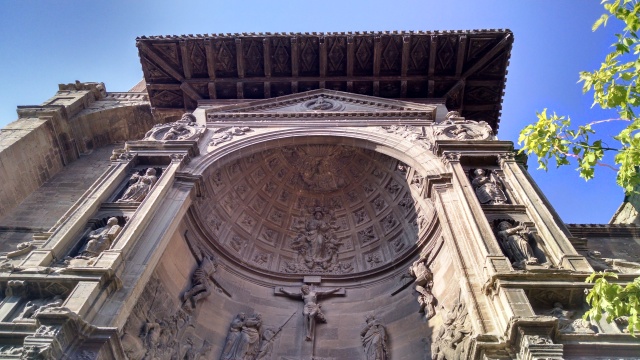 Banners hung from the balconies and posters and sandwich boards indicated a party is imminent.  Unfortunately for us, the festivities did not start till 11pm – way past pelegrino midnight (same as hiker midnight…9pm) and albergue lockout(10pm).  As we walk this morning through the dimly lit streets, evidence of a good time had by all lingers in the streets.  Food wrappers stick to the damp cobblestones and several young men stagger in front of the just opened Panderia, laughing and shouting, ” Good Morning!  Buen Camino!”. While it is not raining, it is too dark to tell if the skies are still threatening.   We have been fooled before into removing our raingear too soon, and we were determined not to fall victim again, even though our shirts were starting to be wetter from sweat than they ever would be from the current random drizzling. 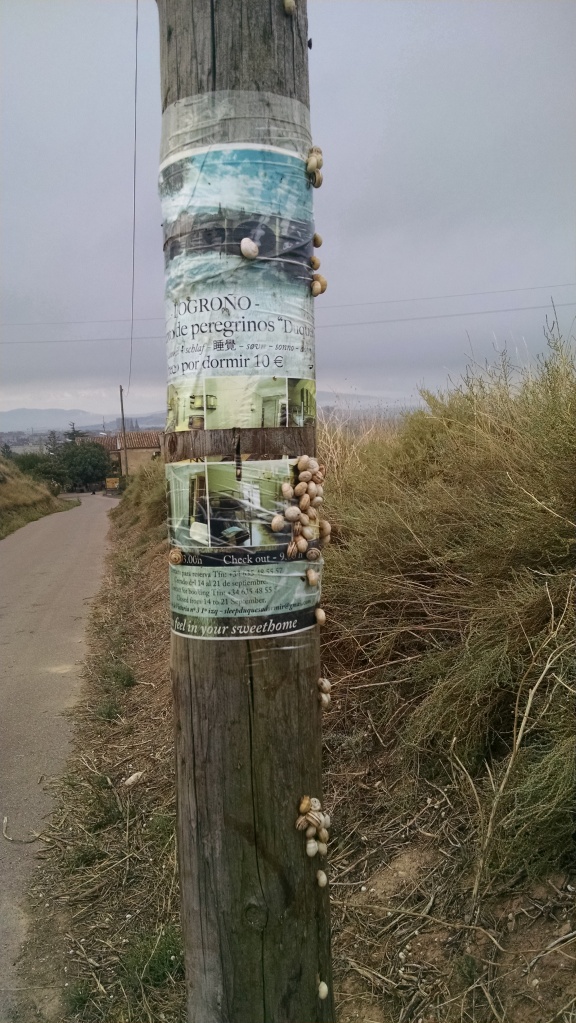 For the most part, the trail is easy and treads on the borders of vineyards that eventually lead to the bustling city of Lograño. 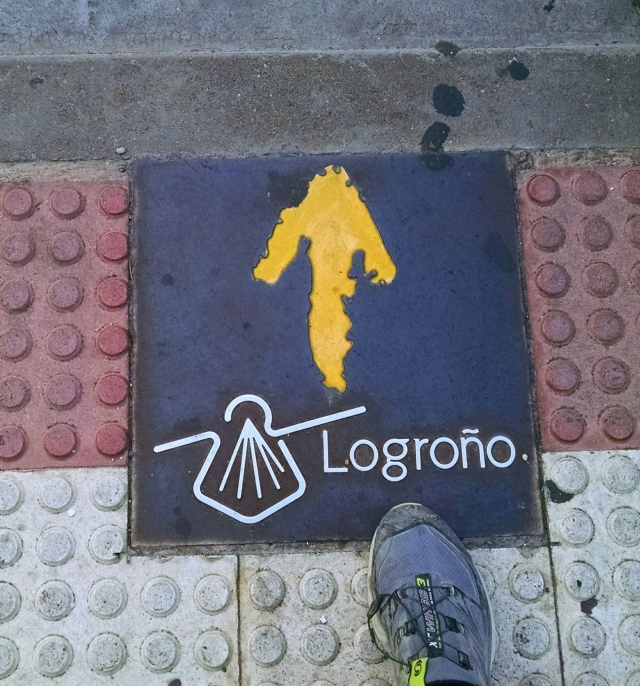 It is weird walking into a city after traversing mostly through countryside and small “sleepy” villages.  Lograño, however is WIDE awake and I feel like we’ve walked into a giant ant farm.  We breakfast at a corner café next to a roundabout.  We chuckle as disoriented pelegrinos look at us and ask US for directions.  Go figure.  Sherrie pulls in sans backpack (she shipped it ahead to give her knees a break, per our suggestion) and has a bite and a chocolate with us.  She tells us her feet (still blistered) and knees are feeling much better when not lugging around 18kg (40 lbs). Since we are in a big city, we figure this is the best place to look for an additional USB micro cord, and send Sue and Jerry ahead telling them that we will “catch up”.  I think I understood the directions given by a helpful shop keeper and we peel off just prior to the Camino turning into a giant park (think NY Central Park), to find the Spanish equivalent of our Radio Shack.  Numerous locals whistle, yell to get our attention and point in the opposite direction, obviously distressed that we are veering off the Camino and risk getting ” lost” in the big city.  We assure the locals as best we can and find our store.  Back on the trail we walk through the park. 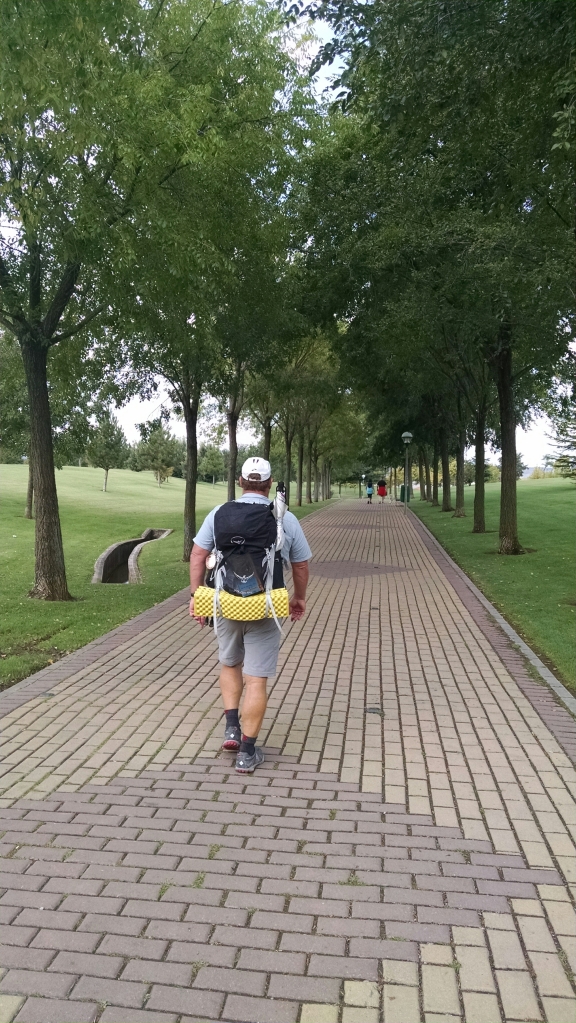 It is massive.  The park leads past a reservoir and encompasses a habitat restoration area and the through acre upon acre of rolling vineyards. 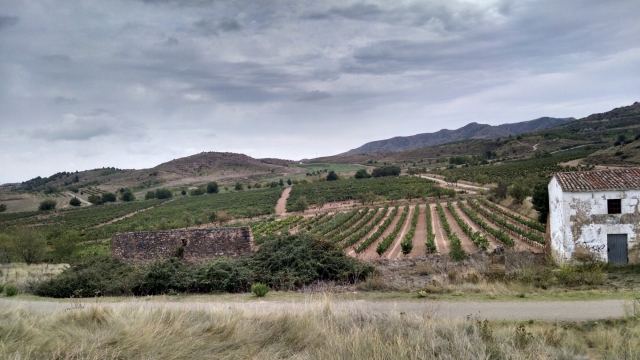 We pass the remnants of an ancient albergue or hospital. 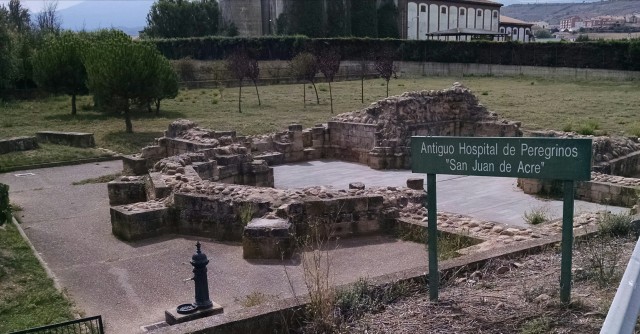 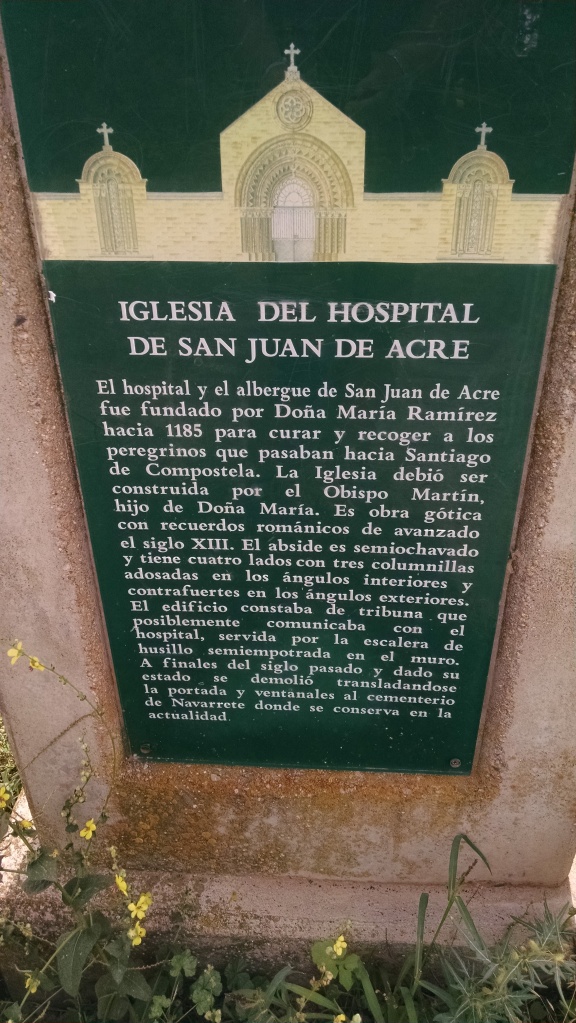 Once we reach the edge of the village of Navarette, we search for our albergue which is on the Camino route.  Initially we have a difficult time locating the markers, as the ones affixed to the buildings do not resemble anything we have seen thus far. 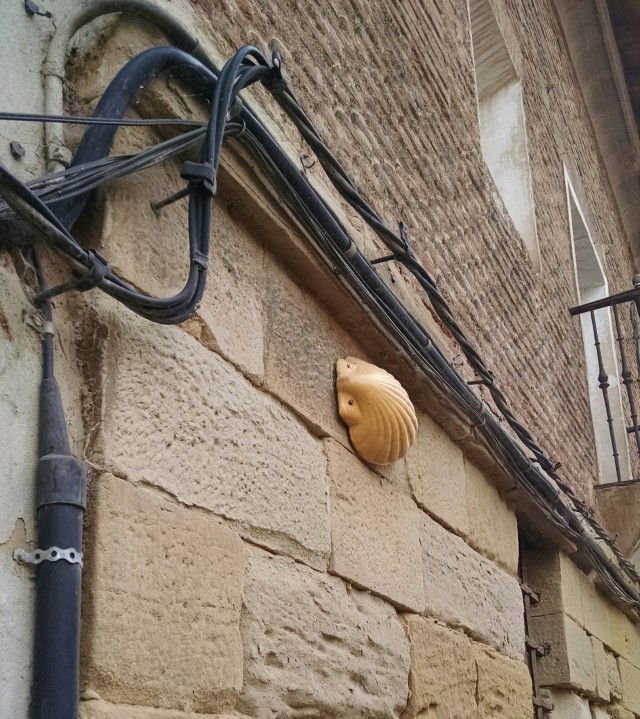 As we got further into the village and towards the center of town additional markers can bee seen on the streets. 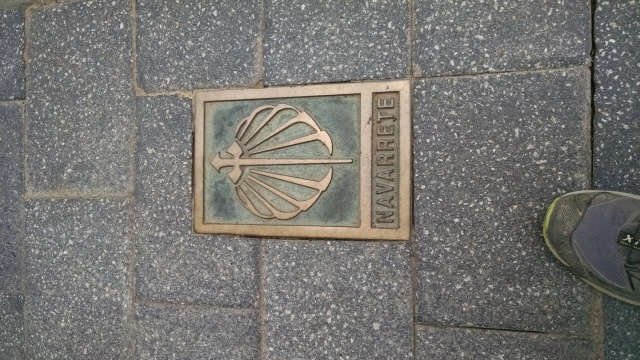 Eventually we reach our albergue (A la Sombra del Laurel) and check in.

This place is right out of The Exotic Marigold Hotel, complete with our own “Sonny” who’s name is Angel, which was appropriate. We are treated like royalty.  No need to go out to dinner. 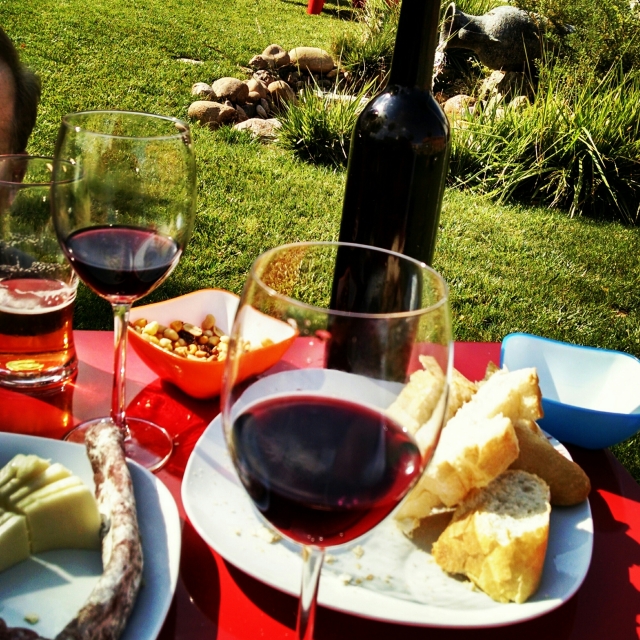 Here we will take a much needed day off.