Everyone said getting a hitch out of Bend is difficult and they’re not kidding.  We walked about 3 miles to the edge of town, fully loaded, with our PCT Hiker sign.  When we were fully exasperated we heard a voice behind us, “You guys need a ride?”  Parked behind us was Sweet Medicine.  She appeared like an angel.  God works in mysterious ways as we were starting to get snippy with each other about our strategies of getting a ride out if Bend. Sweet Medicine said she picked us up because of our PCT hiker sign and later told us that for some reason or another she had decided this morning that she needed to go into Bend to her favorite chiropractor.  And when she saw our sign, she knew why.  Divine intervention!

Turns out she is of Indian descent, so she and Paul had lots to talk about as he is 1/32 or something like that Chippewa on his mother’s side.  She is on the Indian council and specializes in edible plants.  Finally, if anyone would know why the forest smells like waffles sometimes, she would, or at least be able to tell me with certainty, I’m crazy.  Turns out it’s a combination of two types of pine.  Jeffrey pine that smells like bacon and white pine that smells like vanilla.  Redemption!  Sweet Medicine knew exactly where to take us.

The Jack Lake trailhead is where she dropped us.  We walked through the B&B burn area.  It was amazing.  The devastation of the burn is nearly unimaginable.

Huckleberries line the trail.  As the Jack Lake trail intersects the PCT we met a nice section hiker, Michelle.

In the end, we named her bookworm, as she is well read and sells books.  She is especially fond of the area cause her dad used to take her up in this area when she was younger, and more poignantly, her  Dad’s ashes are spread in the area of Three Finger Jack mountain.  Her dream is to be able to thru-hike the PCT.

We lunched at Rockpile  lake and enjoyed sitting in the sun.

Although most of day was hiking through a burn area, the views it afforded were stellar.  The burn area reminded me of tall white ghosts standing watch over all who enter.  The burn area turned into colorful forest.  In fact it was, a magical forest area. 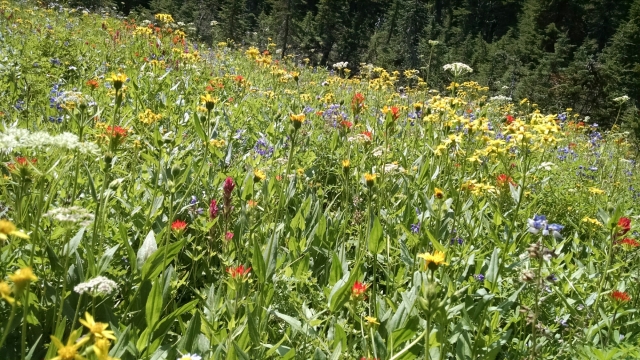 Perfectly groom, like garden gnomes worked there.  I halfway expected to see a unicorn grazing in the small pristine meadows, or better yet be greeted by a Centaur with a plate of cookies, who says,  “Welcome, would you like to have some Keebler Elf cookies?”…and no we were not drunk or high, but still we agreed the forest was magical.  When the day was over, we camped at Shale Lake under the shadow of Mt. Jefferson…magic in itself.