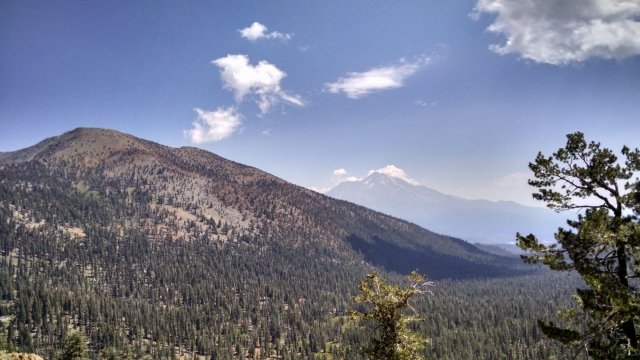 Small critters enjoyed sampling my camp towel all night, which I suppose is much better than trying chew through my pack.  I shake the towel and it “snows” bits O’ towel.  Me thinks it’s time for a new one.  I pack up what’s left and we hit the trail. I’m hoping today goes better than yesterday, as I woke feeling a little better.  Again I’m not 100%, but still not as bad as the morning before.  I must be getting better, I think, but I’m still nauseous.  Figures that my feet and legs feel great, but that not all systems can get in sync.  Paul is being a good sport and doing everything he can to make me feel better. I’m beginning to worry that if this crap continues, I’m gonna have to get off trail and see a doctor.  This morning we start with plenty of water so there is no threat of dehydration, and there is another spring in 3 miles.  When we get to the spring we find a note skewered by a stick stuck in the trail from Donna, and apparently she has embraced her trail name, Timber.
It appears that today we will definitely run into each other, but will be going opposite directions.  We intersect a few miles from the spring and catch up on our goings on.  Yesterday she had waited for us at the spring and then camped at porcupine lake. We commiserate about the heat and climb through Castle Crags.  Timber needs new shoes.  Her current footwear is too hot and killing her feet making hiking intolerable.  I deliver the data cable and hope it works as it is not a “genuine” Apple product.  She plugs it into her battery pack, but her phone is so dead that it barely acknowledges that it is charging.  We tell her we saw a pair of women’s running shoes next to the road where we camped at mile 1530.  She should try them and see if they’ll work.  She laughs.  But we’re serious!  It’s like perfect trail magic, we tell her. Her plan is now to go in to Shasta City and get footwear like ours and hitch from there to Etna.  No need to reclimb that hill again, but she said it in a more colorful way, that only Timber can.  Before she went on her way she gave me some of her ginger/electrolyte capsules to help settle my stomach.  These capsules and her nausea medication allow me to carry on.  I really should not give her so much crap about all the “just in case” stuff she carries. 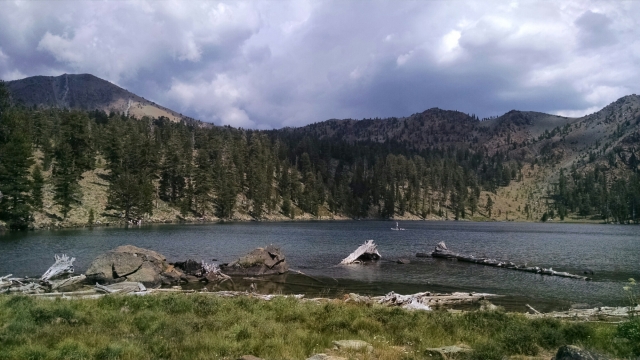 We made it to Deadfall Lake and took a break.  We saw people on horseback and several day hikers recreating at the lake, to include a blow up, stand up paddle board.  We napped had some lunch and watched the clouds go by.  While I slept Paul talked with a thru-hiker turned section hiker, Frank who also decided to lunch at the lake.  Frank has attempted to thru-hike the PCT several times and each time was thwarted by fires.  Each time he started from Mexico.  In this year’s attempt, he decided when he got to Wrightwood that he would change to section hiker and skipped ahead to the last time he was stopped.  Frank says there’s a definite shift in mindset.  He has evolved from the thru-hiker hiker, ‘gotta get in the miles’ mindset, and has taken a more take your time and take it all in, cause you probably won’t get through here again anytime soon approach.  We are kind of taking a hybrid approach of the two, or at least we’ve settled into it, as we realize that we’ve probably passed up a lot of cool opportunities in favor of getting our miles in for the day or week.  The clouds overhead become denser and seem to threaten rain, but shift and pass through.  We gather ourselves and continue on the trail. 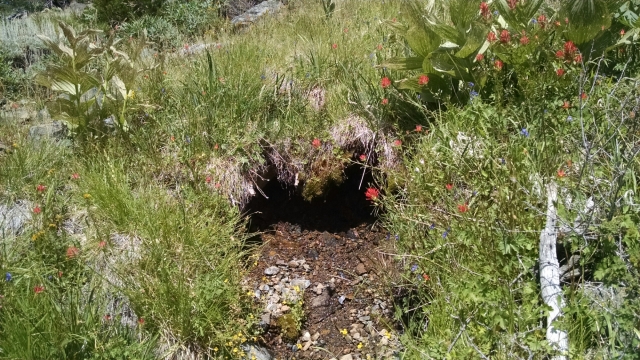 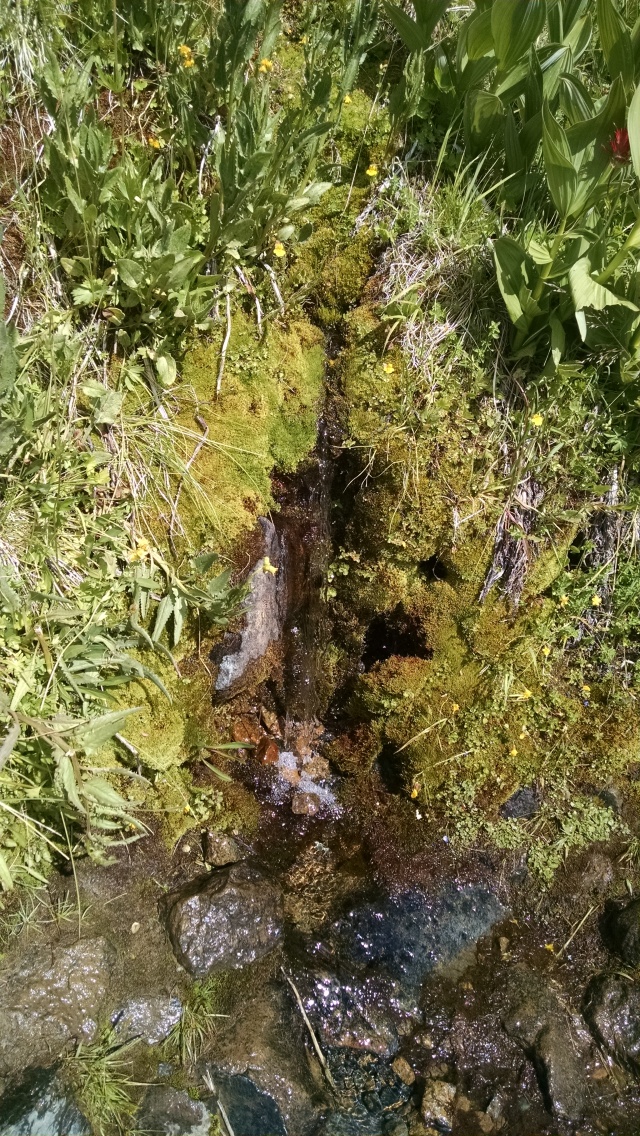 We pass two uncharted springs, in favor of one “sure thing” listed in our guide book and on our map. Dumb!  We, actually Paul, ended up returning to the last (and best) spring a mile back and gathering water, as the “sure thing” was dry.  We continue down the trail and run into a young man who greets us and asks if we are enjoying our day hike.  Thinking our packs are rather large for a day hike, we almost take it as a compliment.  We tell him we are thru hiking the PCT.  He apologizes awkwardly and tells us he’s part of the support team for “String Bean”, who is attempting to break the  “supported” thru-hike record, and is about 20 minutes or so behind us.  He asks how long we’ve been on the trail.  We tell him since March 30th.  You can see him do the math in his head.  “Wow!” Was his reply.  We’re old and slow is ours.  “But at least you’re out here and have made it this far.”  We agree. We go our separate ways and when we get to the trailhead where the support van is, I consider running up to the van and asking how were doing on time.  Paul says he’s going to run up and ask if he’s seen our support van, then have a fit cause it’s not there. We nix the idea, as it would probably only be funny to us, and where’s the fun in that?  Our conversation turns to the origin and uses of the word “shit” and profanity in general.  We do our best to replace profain words with other “benign” ones into “common” descriptive phrases.  Its just not the same. We laugh heartily.  We decide to take a break just past the road and wait for “String Bean”, who now we joke, must not be that fast cause it’s taking him this long to pass us. Frank pulls up with us.  He says he saw String Bean and he was walking and had just stopped at the van.  As we are sitting and talking, Ms. Frizzle appears.  We greet her and ask how far she plans on going.  She is thinking of doing a 30-35 miler today, with a full pack…unsupported.  She passed String Bean, while he was getting ” rolled out” (foam roller) by his support team.  She almost asked if she could get rolled out too.  As it’s starting to get cold, and feel like we are growing “roots”, we decide to get moving again.  Once on the trail, String Bean comes briskly walking up.  He greets us and we walk and talk for a bit.  He’s doing 45-50 miles a day.  Carries a tent and sleeping bag and enough food for in between support access.  His pack is smaller than an average woman’s purse.  Nice kid.  We hope he pulls off the record. 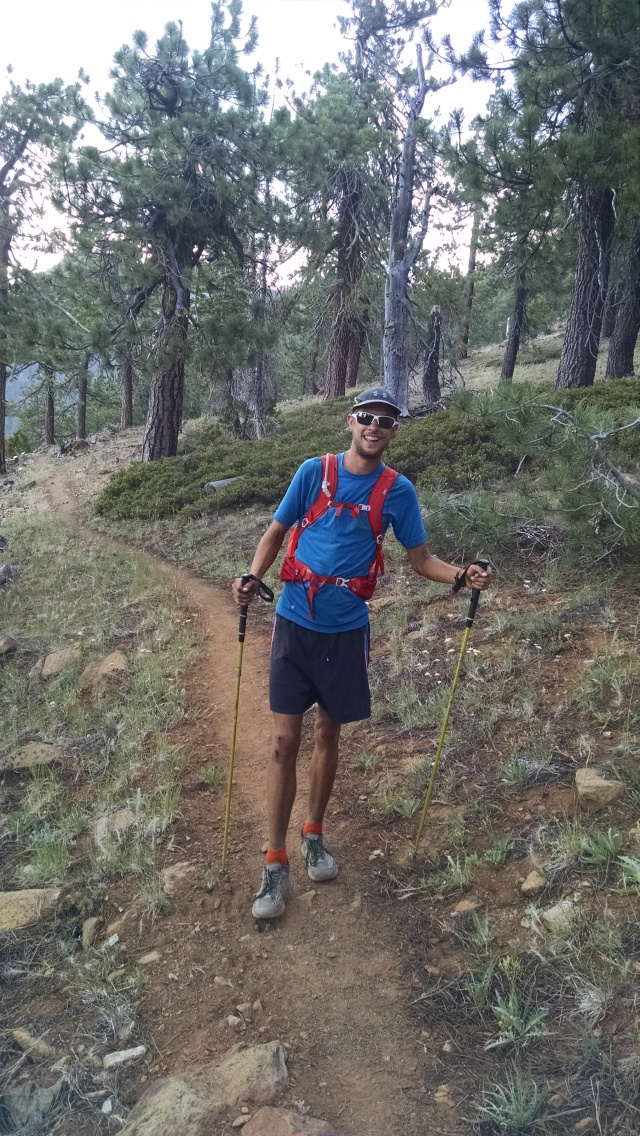