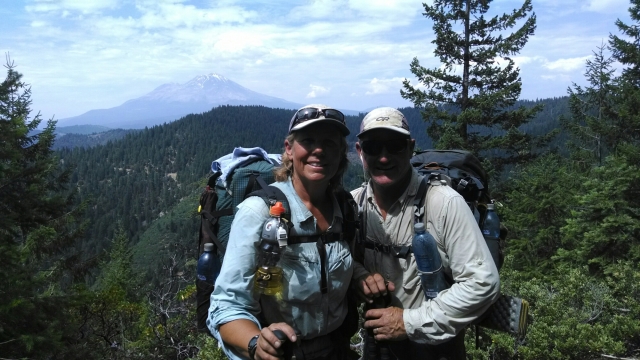 We started strong today knowing there would be a long climb but also a chance to make it to town. The  trail was thick and over grown with spots of poison oak to dodge. We hurried along and made good time to the 10 mile morning break location of Fitzhugh Gulch Creek. 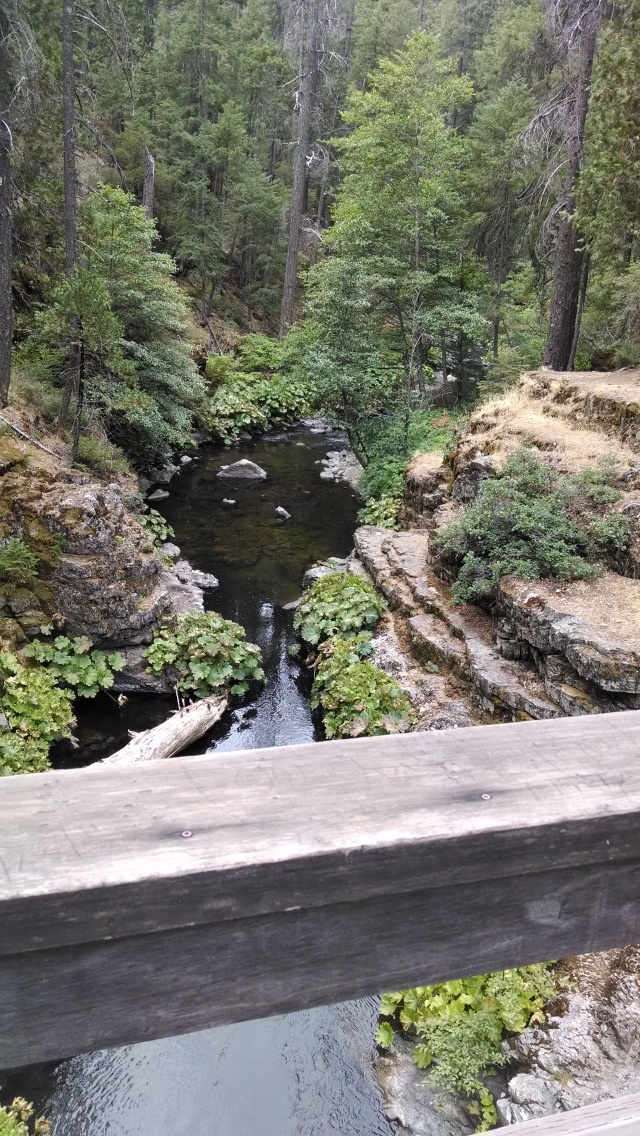 We gathered water and rested because we had 5 mile climb. An Asian woman with sandals, painted toe nails and a large camera approached us. We were all very surprised to see her and asked her where had she come from? She told us that there was a parking lot just a few hundred yards away. She asked us where we had come from and was equally surprised when we said Mexico. Not having any idea we were so close to civilization, we all laughed after she left, and Paul said she was so clean he thought she had parachuted in. After a long break everyone moaned and groaned to get started again and start the climb. 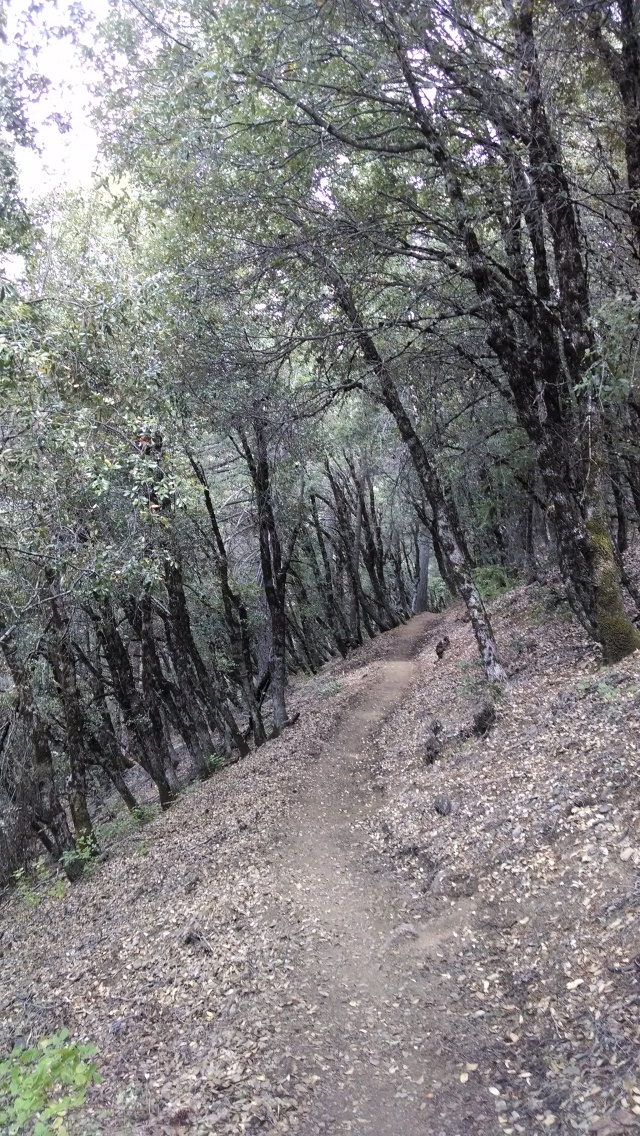 The trail was well maintained and lined with oaks. Reaching the top in a couple of hours, sweating profusely we marched on to get to the water at Trough Creek.  Along the way Maureen, a section hiker, joined the search. She was on the last day of her 500 mile journey. She had finished a1000 miles the past several years and this was her longest section yet. We remember seeing her hitching in to Chester 200 miles ago but hadn’t really talked with her. We were the same age and we compared our trail experiences and found we had many similar observations. I can’t share them all because there were many, but this one we all thought was rather funny. We noticed being older, the young hikers always tell you there trail names and qualify it with “but my real name is ….” As we got to know Maureen, Paul found they had many family things in common. Mostly growing up in a very large family. Paul is one of ten and Maureen one of fifteen. They shared many similar stories and talked for miles. This was great because it kept me entertained distracting me from the pain in my feet. 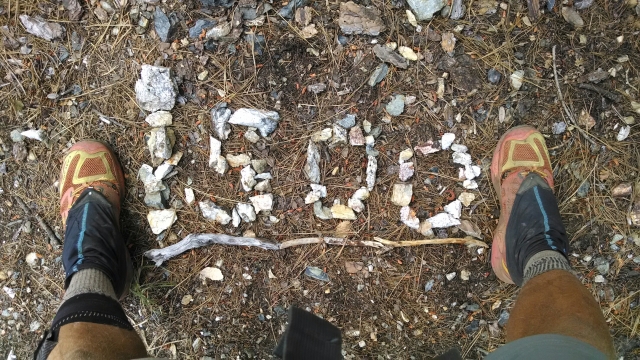 We hit the 1500 mile mark, stop briefly for a picture and onto Trough Creek. Maybe we’ll camp there.  Once at Trough Creek we realize there are no places to camp.  Must be a sign to push on to town.  Soon we could hear the sounds of cars on the freeway, our destination. The last five miles seemed to go by quickly. 24 miles in all today! We exited the trail where a trail angel, “Vinnie”, had posted a sign stating to call him for quick pick up and transport to Shasta City. 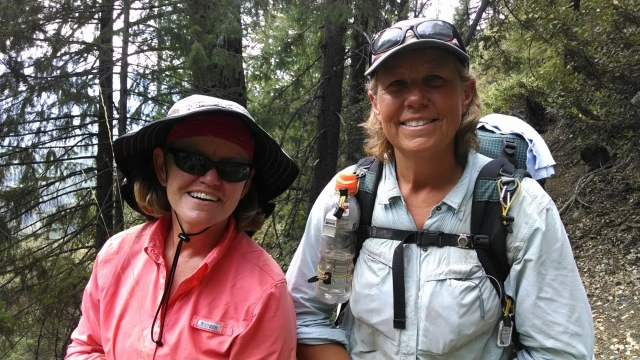 Maureen was so grateful because she hates to hitch and a possible ride from a family friend had fallen through. We were picked up in 5 minutes and on the way to town. We dropped Maureen off at her hotel and said our good byes. “Good bye # 12”, we called, as we had trail named her, for she is #12 in line in her family. Only Paul, who is # 8 would understand that. Vinnie took us into Shasta City, gave us a quick tour and recommended we dine at an Italian restaurant, Mike and Tony’s.  We find a room at Mt. Shasta Inn and Suites.  It’s a little pricey, but we don’t care as the Best Western was full and the other motel close to downtown was as well.  We quickly clean up so as to get to Mike and Tony’s before it closes.  We walk into the bar and are the only ones there. The place oozes atmosphere.  A long dark wood bar, backed with a massive mirror and showcased booze.  Classic booths and perfect lighting.  Through those doors you transition from the new age, magic crystal vibe of Shasta City to downtown New Jersey or Long Island.  You felt like you were in a restaurant scene from the sopranos or the Godfather.  The food was equally endearing, as was the service.  When we arrived, the kitchen was about to close so we ordered quickly, but were treated and served as if there was all the time in the world.  Delightful.

Donna didn’t get as far as us today (although she is quite the trooper to jump in and keep up with us like she did). She ended camping with two gals she ran into looking for a campsite and actually knew from Auburn.  How cool is that? The world shrinks.