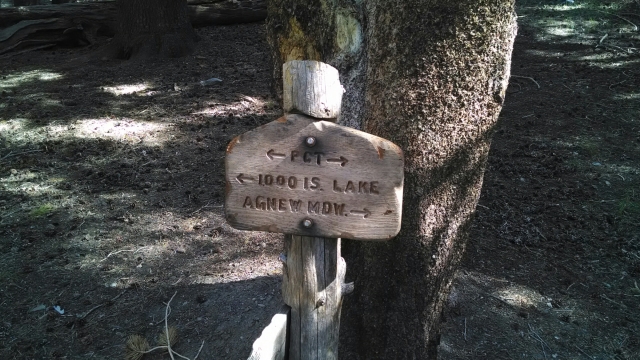 We while away most of the day on the front porch of the Sierra Nevada Resort doing our best to catch up with our blog, get current with bills and our kids.  Finally it’s time to get back at the trail.  Paul has talked to one of the Mammoth trolley drivers who says he can get us up to Agnew Meadows as nothing is going into Reds.  We hop on the trolley with foot long Subway sandwiches for our dinner only to discover he was incorrect.  The driver apologies profusely and gets us to another bus line that at least will get us “closer” to where we need to go.  No worries as it’s all part of the adventure.  Hiccups like this are trivial in comparison to actual life threatening situations.  The other bus’s “end of the line” is at the Mammoth Ski area main lodge/store which is now converted for mountain bikers.  We are told we should have no problem getting a hitch from here and he’s right. In less than 2 minutes we yogi a ride from Loraina (sp?) who’s kids have just cleared out their school and ski mountain lockers.  As they are locals, she jettisons her kids (teenagers) to the bus and offers to give us a ride to Agnew Meadows.  She is excited because her oldest daughter (who’s getting her haircut and not in the van) will graduate from high school next year and wants to hike the PCT after graduation, and she wants to do it with her mom…Loraina.  Loraina peppers us with questions, and conversation flows freely.  We are excited for her and her daughter and tell her they should definitely do it.  It will be a great adventure for the two of them and a serious bonding event.  We give her our card so they can follow our blog and learn from our adventures (mis and otherwise) and thus prepare for theirs.  We get to Agnew Meadows and the moment we step out of the car we are swarmed and attacked by what Paul now calls “flying Piranhas”.  Crap. Now we know what we forgot to get.  Not that we only had it in our hands no less than three times, but never actually purchased.  Deet!  Loraina offers to run us back into town to purchase some bug spray (we had been using a small spray bottle of Ben’s 30% feet and had run out).  We initially balk at putting Loraina out any further…she did make her kids ride the bus, but we (I) do not relish the idea having blood sucked out of me for another 100 plus miles by little nasty ear buzzing C02 chasing insects.  We have head nets but they are annoying and we prefer to walk in shorts.  Back into the van we climb.  First stop is the gear store at the lodge.  Yes they have mosquito spray, but not in a thru-hiker size container, but more like the size of some of the ridiculous bear spray canisters we’ve seen some people carrying.  As we don’t want Loraina to have to drive any further, we purchase the mega canister (which we later discover is the best purchase EVER).  Loraina drops us again at Agnew’s and we thank her profusely for her kindness and tell her that when she and her daughter hike the PCT we’ll be sure to return the magic. The sign at Agnew Meadows says, ” No Camping at Trail head “.  We have at least two hours of daylight left, and even though we have bug spray, we’d rather not have to “tolerate” the flying piranhas till it cools off so we start up the trail and decide to walk till we find a good campsite.  Four miles or so later…uphill, we find a spot and set up camp.  As we set up, we see the back of a fawn colored fury animal walk through the trees 50 yards uphill from us.  Hmmm, Cougar or Coyote?  We heard there is a “cat” in the area that had been taking out some young cattle and wonder if this is part of its 100+ mile range.  We continue to look for the animal as its last “track” was downward toward us.  All of the sudden it appears less than 10 yards from us.  We both jump…I directly behind Paul. Phew, it’s only a coyote.  He looks at us.  He’s a bit mangy…not good.  We yell at him.  He looks like he’s pondering a decision.  Paul decides to help him with it’s decision, picks up a couple of rocks and motivates the mangy coyote to move on.  We watch to make sure it doesn’t circle back around.  Territory defended. Check.  Now for our sandwich and bed. 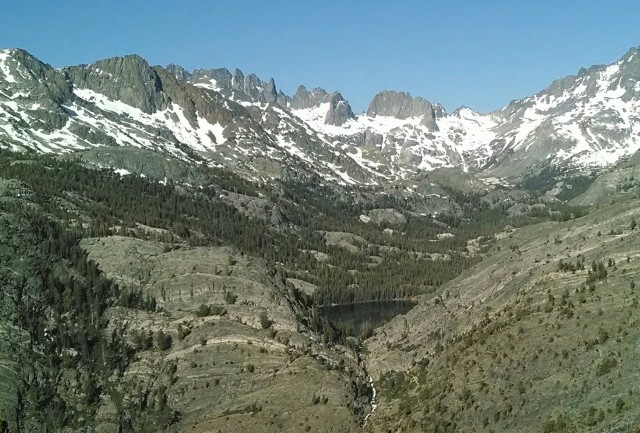 View from our campsite

Today’s big challenge will be to get over Donahue Pass 11,005 ft. Paul climbed this pass last year with our son and said, “It’s not that bad”.  We tread upon a beautiful soft forest trail for most of the morning.  We pass the most picturesque scenery as we make our way past 1000 Island Lake. 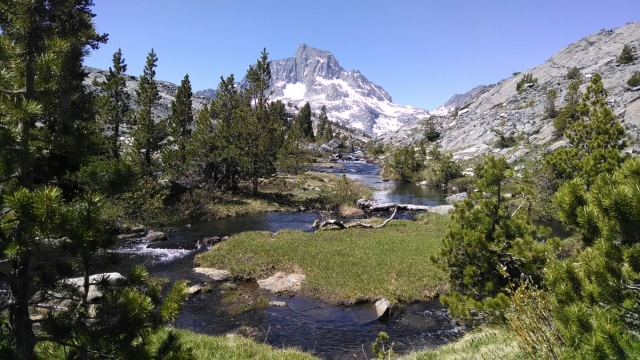 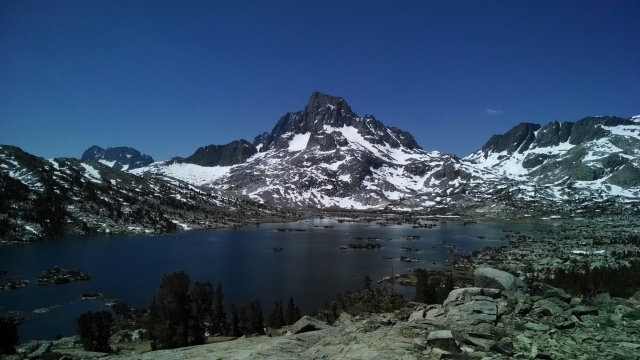 After lunch we began a slow climb along a river between large boulders. The higher we climbed the less trees there were.

Finally the trees end and there are nothing but boulders and large peaks ahead. Paul assures me its up to the left and up we go. We climbed over rocks, boulders, and slabs as the trail weaved up to the pass. As we crested the top we could see Lyell Canyon (actually a green valley) and the Lyell Fork of the Tuolumne river. Beautiful!!! Down in the valley is where we will camp. 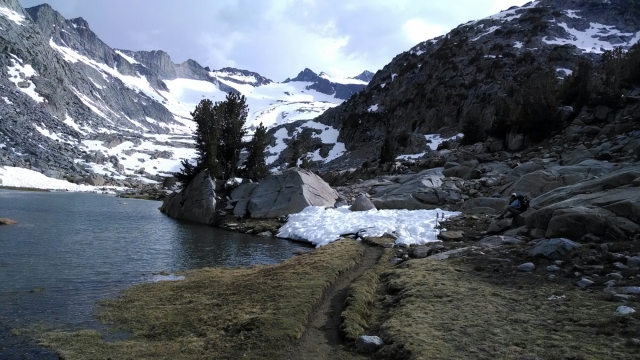 Looking back at where we came from Donahue

We descend down into the valley, crossing several waterfalls and creeks, and a small lake…some with shoes on, some without.

Down at the river we cross to the other side and look for a campsite…aka a 5ftx5ft flat piece of dirt.  Before this endeavor however we must douse our arms and legs with bug spray. These flying terrorist have declared jihad on hikers. We found a good camp site and settled in. Tonight the sky looks like, and the air smells like rain with large grey clouds overhead. I guess we’ll see how our tent does in the rain…if it does end up actually raining.  Often in the Sierras, it tends to threaten to rain then doesn’t…which is okay with us. Tomorrow we will further descend into Lyell Canyon and head to the Tuolumne Meadows store to pick up a resupply box and and a cheese burger. YUM!