VVR and a food coma 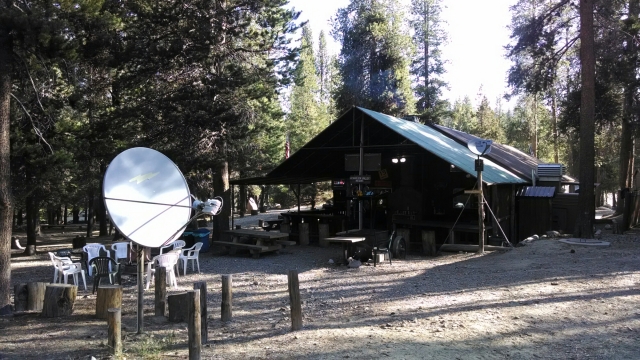 Up and motivated to get to non rehydrated food we grab a power bar and hit the trail.  The only problem is that we had no idea we would have 3 stream crossings all before 630am.  Thus was the coldest our feet have ever been.  Even colder than wearing frozen boots.  Granted, each crossing only took 20 sec but these were about 50 yard apart, thus no point putting the boots back on till we were done.  It was as if our feet had been flash frozen.  I actually thought Paul was going to cry his feet hurt so bad.  It took nearly 20 minutes to regain feeling in our feet and they still weren’t warm, or comfortable for that matter.  Bear in mind that our boots over the last 60 miles or so have  felt like they were getting smaller and smaller, especially on the downhill portions of the trail, so now add frozen toes

and a 8.7 mile alternate Bear Creek Trail (all downhill) into VVR cause we were too late for the ferry, and we were two super happy campers…nothing beer and a big fat cheeseburger can’t fix though.

When we finally made it to the dam (that’s where the alternate trail ends) we lucked out. Paul saw an older man walking along the dam and went over to talk or more like yogi us a ride. “Dam hot wouldn’t you say?” Nothing like being obvious! The man chuckles and the conversation begins. After a few minutes of talk about the lake and the trail Paul tells the man that we are going to the resort for a cold beer. The man replies that he has cold beer half way to the resort. Paul tells him “we will follow you”. When we arrive at man’s campsite he makes good on his word and we enjoy a cold beer with his two camp mates as well. After some entertaining and enjoyable conversation with the three older men we said good bye and start to hike the last mile. We hadn’t gone far when two fishermen picked us up and drove us the rest of the way. This was great because we had just started talking about what kind of food we wanted to eat. This resort is not very fancy like some resorts like you’d see at Zion or at Yellow Stone, but it is very hiker friendly and has good resupply food. The first thing to happen when you walk in, is that you are given a free drink of choice: beer,soda, or water.   We chose beer.  Go figure.  The cafe food was excellent and served in hiker proportion (x-large).  There was an opportunity for a shower and laundry (at a price) but we decided to wait till Mammoth.  We gorged on a hubcap sized bacon cheeseburger with fries and washed it down with our beer…and a shake.  While eating we struck up a conversation with two JMT hikers who where dining and resupplying at VVR.  We traded a few stories and our resupply plans. Turns out they thought they might have sent too much food, to which we offered to relieve them of their overage.  This worked out well for both of us. Their food was put to good use, and we didn’t have to buy any to get us to Mammoth.  We thanked them for their generosity and then set up our tent.  Serious food coma coming on.  After a much needed nap, it was time for dinner.  Not that we were all that hungry yet, but near gourmet food in the middle of practically nowhere, how can a hiker pass that up?

Easy A, Katie and Paul

At dinner we met “Easy A” who is in real life, a cantaloupe breeder.  Ya, we thought the same thing…a what? Not sure how you get cantaloupes to “breed” but I guess it’s a good job/skill to have as when Easy A told his boss he was going to quit to hike the PCT, they told him he didn’t need to quit, they would give him the time off, as long as he came back within 6 months.  Deal!  We also met BamBam and his hound dog Huckleberry (sorry no picture).  Later everyone sat around the fire and chatted till way past hiker midnight.

4 Responses to VVR and a food coma