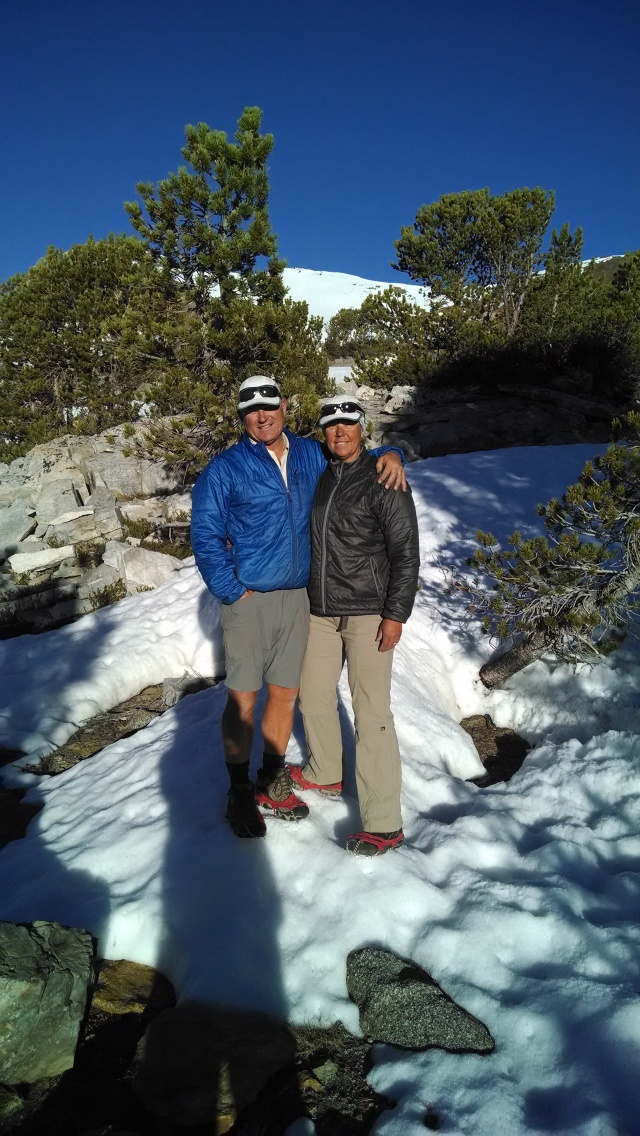 The morning alarm goes off, we roll over and say, “Happy Anniversary”, but Paul, the sly dog, hands me a card that he has carried just for today.  We consider how nice it would be not to have to get up and move each morning, but then Canada, nor Pinchot Pass will come to us, so we must go to them.  We make our way up the trail paralleling a ragging river (probably considered a creek) with powerful waterfalls.  There are a few crossings of “creeks” we attempt without removing our shoes.  Paul makes them generally with ease, however I’m usually tentative when it comes to “rock hopping”.  I was hoping to add a video to demonstrate my sad balance and coordination, but I am also a luddite, and have no high school kids available to help work through (actually do it ) the process.  Use your imagination with this photo. 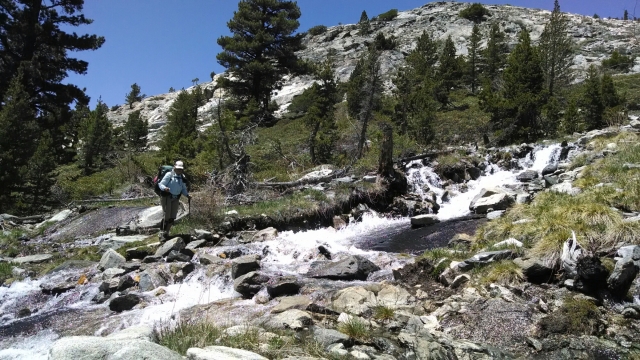 We have another river crossing, 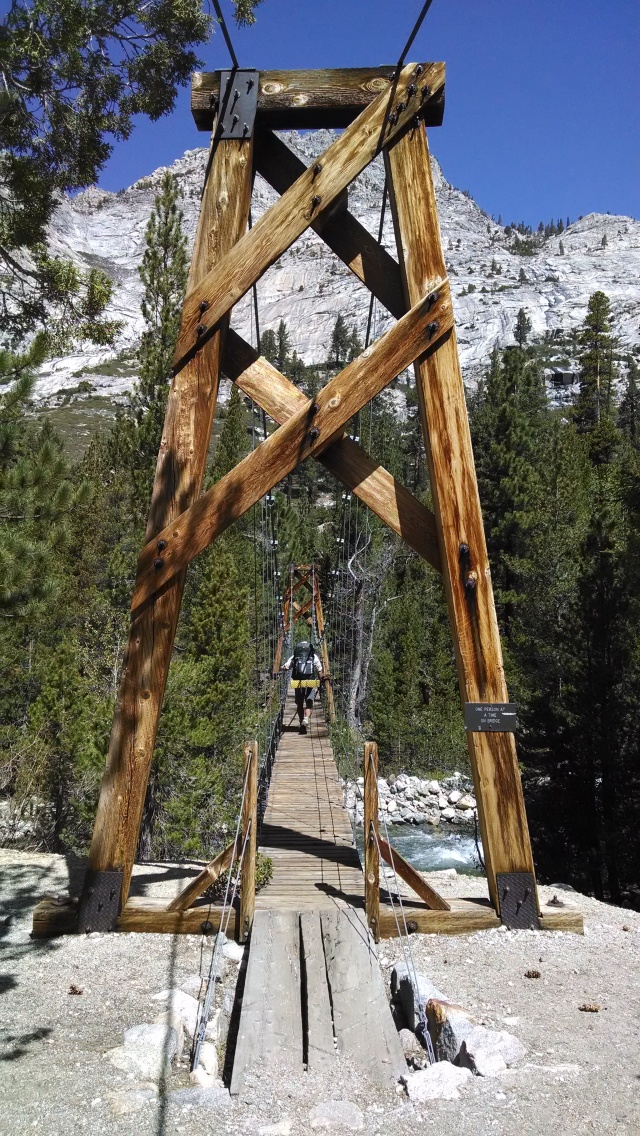 but this time we have bridge…a suspension bridge in the middle of practically nowhere…go figure.  We passed the 800 mile mark and stop for a photo op. 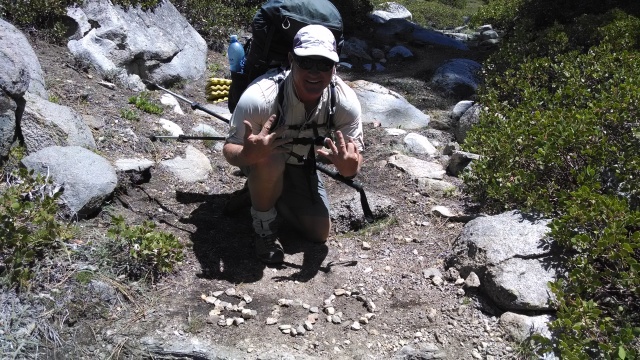 We continue to climb in elevation toward Pinchot Pass and are met with snow once again.  It is late afternoon and the post holing becomes more frequent and dangerous in the sense that we fall deeper and deeper increasing the odds of getting a foot or ankle trapped under a rock or even worse, breaking a leg.  We are also unsure as to which of the three “passes” we see before us is actually Pinchot as the trail is unrecognizable due to the snow. 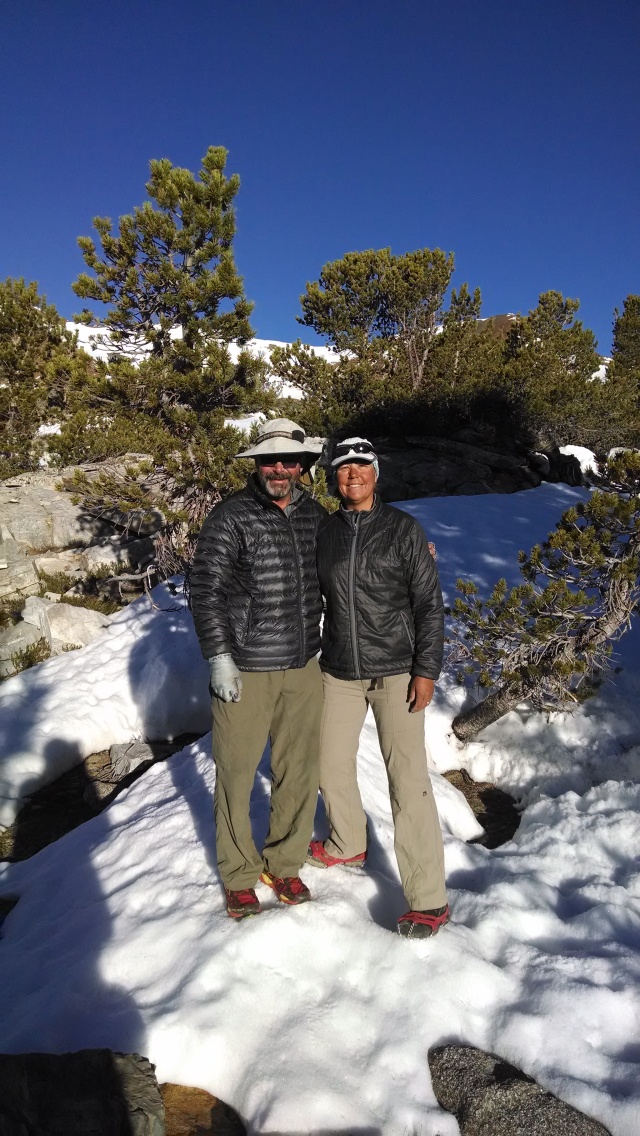 We meet another thru-hiker, Rags, who is just as perplexed.  We all agree that it’s too late in the afternoon to continue on and search for a place to camp for the night.  Rags, who is a little older than us (recently retired from Costco) finds a great spot on a dry knoll amongst some trees.  We set up camp and begin comparing trail stories and other hikers we’ve met.  Rags tells us he’s been cowboy camping lately without an air mattress or pad of any sort (his sprung an unrepairable leak, so he tossed the thing), and at Kennedy Meadows someone stole his stove and pot, but left him his spoon, thus he’s been eating his food cold.  Rags was not mad or bitter as he figures apparently who ever took his stove must have really needed it.  He plans however to buy a new one once he gets to town.  We tell him he’s in luck cause we have a JetBoil stove, so he can at least have a hot meal tonight and if he’d like he can use our two Z-rest sit pads to sleep on as well.  Rags responds, only if it’s not too much trouble and if you can spare the fuel.  We add that we have coffee too and he smiles brightly, “this is my lucky day”.