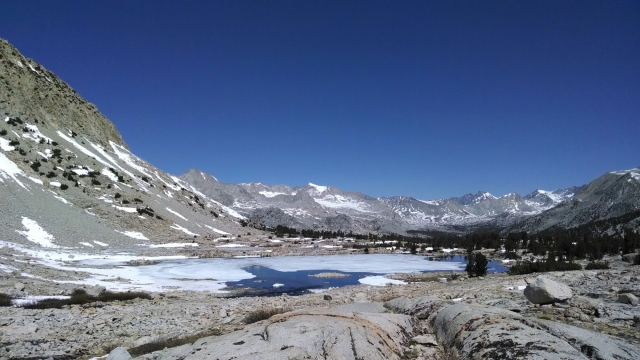 Our camp (far right in the trees) down below the pass

We awoke today to a very frosty cold morning, having camped surrounded by snow above 10,000 feet. The snow surface was frozen which was a good thing and we wore micro spikes on our boots for traction. No longer post holing we made good time following the tracks in the snow toward the pass in the middle of the colossal bowl. Straight up we went huffing and puffing gaining elevation quickly. Rags was in the lead and about half way to the top of the pass called back, “do you think this the right pass?” We all recheck our maps and the GPS maps as well.  We conclude we’re not sure and continue to climb. When Rags reaches the top he looks over the top. His posture tells it all. Hands on his hips he looks left and right several times before turning around. I knew what he was about to say “wrong pass!” Out comes the maps again and we agree the pass to the right was where we should be. We decide to traverse the mountainside rather than give up any elevation. This was easy for Rags and Paul, but not for me. The traverse went through a boulder, rock, and gravel field. Not to mention, it was EXTREMELY steep! Following Rags and Paul I began my 2 hr struggle. Did I mention I don’t like heights, I’m not very good with rock hopping ( I fight gravity and use tracking poles to stay up right), and freeze (nearly hyperventilating and seriously terrified) when rocks would release and tumble hundreds of feet below me. Do l have to say I hated this! Paul stayed close giving me literally step by step instruction.  He on the other hand appears to be enjoying this unexpected challenge… I guess it’s a “guy” thing. Rags on the other hand made good time and was over the pass in about 30 minutes. As we were almost to the top we saw another hiker making the same mistake. Paul tried calling and whistling to redirect him but he was out of range. If he followed our tracks he was in for a long morning as well. We finally crested the pass and looked over, and what a surprise (not really) down into a snow covered valley. We are both seriously beginning NOT to like snow.  Rags was long gone. Dejected from what we thought would be an hour climb (now 3 hours) we spot two candy toffees atop a small rock in the trail. 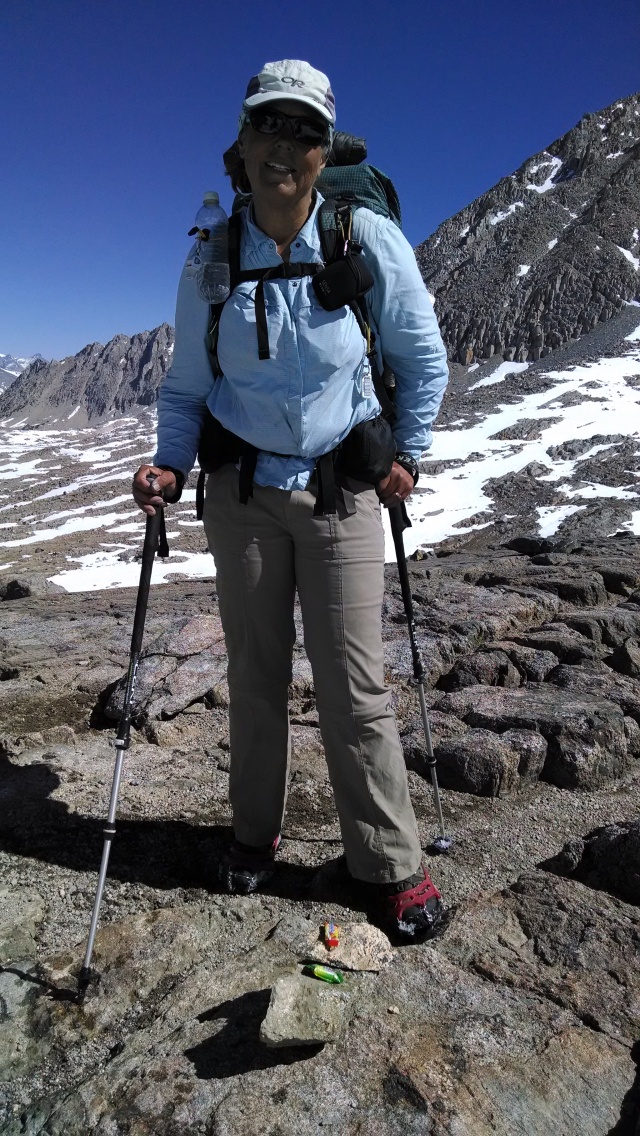 Rags! He shared the same candy with us last night after dinner. We smile and laugh. He understood what we had just gone through. Or at least me. Thanks Rags! We needed something positive to lift our spirits. Down we went as quick as we (me being the pace setter…if you can call it a pace) could, trying to make up time. We both were still feeling stupid for following tracks and not completely verifying them with the maps. We vowed to never make that mistake again. After several miles we cleared the snow having dropped elevation and find the trail. We stopped for a well deserved break and agreed we were not going to make the miles today we had set out to make. Stuff happens! We had hoped to make it over Mather’s Pass today too. The decision was made  to get to the base of Mather’s Pass, make camp, and climb the pass very early in the morning. This will put us a day behind and we will have to rethink our food supply. The day continued “normally” as we made our way up toward Mather’s. The views of the Sierras are incredible. With the snow melt increasing, waterfalls cascading from above are more common. Even though we are physically and mentally worked over, we haven’t become callus to either the views or waterfalls and point them out as they come into view. Most of the time you hear the waterfalls well before you see them. Making it over or through the creeks/rivers is becoming more difficult and the temperature of the water is so cold that your feet ache beyond belief. Late in the afternoon we had several creeks to ford and after several successful crossings we reached the King River. We don’t like cold wet feet to hike in and because your shoes freeze solid at night we prefer to take our boots off and cross in our camp shoes(crocs). Well, as if today already wasn’t rough enough, one particular crossing didn’t go well. Paul made the crossing and waited for me. I made the crossing, sat next to Paul, and began to dry my feet when I realized my boots were missing! Paul in disbelief and after saying some choice words, along the lines ” You’re kidding!”, begins to frantically search where I had crossed.  Down stream he goes weaving around bushes and rocks looking for my boots. By now I’m thinking of writing a book on how I crossed the Sierras and snow covered passes in a pair of Crocs. (Sheryl Strayed eat your heart out. Oprah, or is it Queen Lateefa, here I come!…trying to make lemonade here) I see Paul enter the river 75 yards down steam, reach down, and then hoist my boots in the air. Thank God!!! No really… Thank God!!! If I didn’t have a trail name already I would have earned one here. I’m sure you can think of a few. Feel free to enter them in the comment section. After my reunion with my boots and Paul finally stopped looking at me and shaking his head, we had a good laugh. The type of laugh you have after having the crap scared out of you. I lace up my seriously soggy and hopelessly waterlogged boots and trudge on.  This time there is no need to remove my boots or even rock hop for further creek crossings…at least I got that going for me.  Paul remarks that I’m a “real “Thru-hiker now.  Around five o’clock we reach the base of Mather’s Pass and make camp. 8 miles! It feels much farther.  It will be good to put an end to this day but not before a hot rehydrated meal. Tent set up, sleeping pads inflated, sleeping bags laid out, time to boil water and eat. Not! The day is yet not over and we run out of fuel and eat a cold meal. We recount the day’s mishaps.  How many?  We know things seem to run in three’s.  Do we have anymore to look forward to or be prepared for? Hmmm.  Wrong Pass, mutinous boots, out of fuel (with 3 more days to go…at least), that makes three.  We’re good.  Tomorrow will be a seriously better day, but then there go the talk shows. 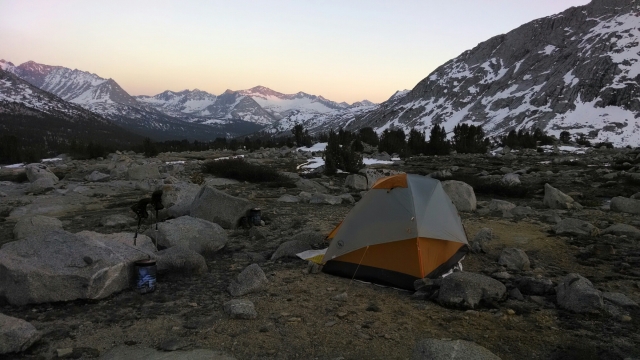 12 Responses to Rule of Threes