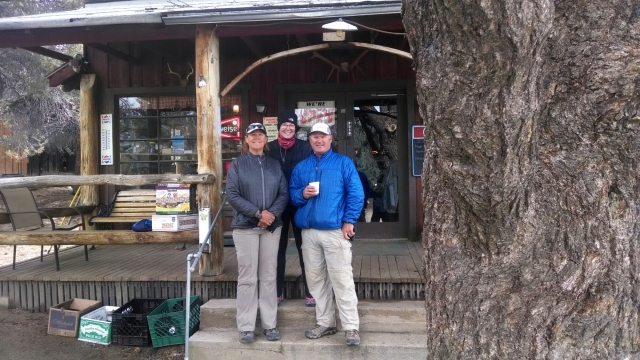 Figured we try and get out today. My shin feels pretty good and the skies appear to be clearing.  We pack our packs and have a bit of breakfast, and say our goodbyes to Arizona, Banana Boat and Cheetah (all of whom will catch us once they get back on the trail.) Cheetah and Arizona need to go into Lone Pine for some paperwork and gear issues and Banana Boat has a chest cold.  Banana Boat is 21 and taking a year off from college to wander and do the PCT.  She is quite hilarious and full of energy.  She had started the day after us on April 1st, and due to a series of mishaps ended up at KM just after we did.  Off into the Sierras we go.

We climb over 2000 ft, but its over 14 miles so the trek is fairly pleasant.  The skies above appear foreboding and we wonder out loud if we made the right decision leaving today…especially when it starts to hail on us 6 miles out.  We quickly don our rain gear and pack covers, only for it to stop 15 minutes later.

We take off the rain gear as we are sweating profusely, but keep the pack covers on.  At about 10 miles from KM we see three hikers heading SOBO, but we recognize them as SloBro, Me Too and Hemlock.  When we pass, we ask if they’re alright.  They tell us that they got to mile 720 last night and ended up walking in a “whiteout” and six inches of snow.  They had some gear failure, nearly froze and decided to head back to KM for equipment change and to wait for better conditions.  We told them that we were planning on only going to mile 716, to which they agreed was a good idea.  By tomorrow the conditions should improve with the snow compacting a bit which should be no problem for us as our footwear is heartier than theirs. 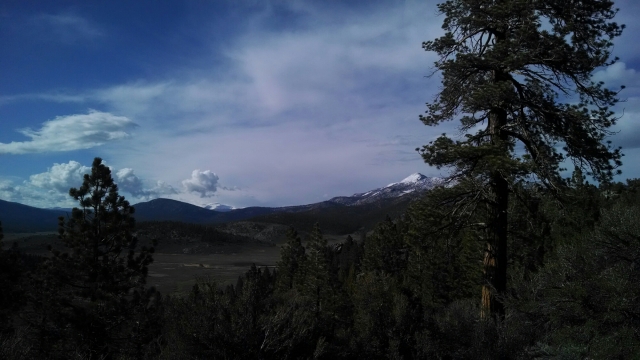 We trekked throughout the day with puffy thunderheads threatening to rain or snow on us at any moment.  As we got closer to our end point for the day the sky cleared and we were happy to see clear blue skies.  We arrived at the campsites adjacent the south fork of the Kern river and set up camp up the hill from the river hoping to stay warmer and dryer than the rest of the hikers.
As we ate our heaviest food first, which is the strategy to get your pack weight light, in this case Mac n cheese. We were entertained by two fighter jets buzzing the valley several times just before sunset. 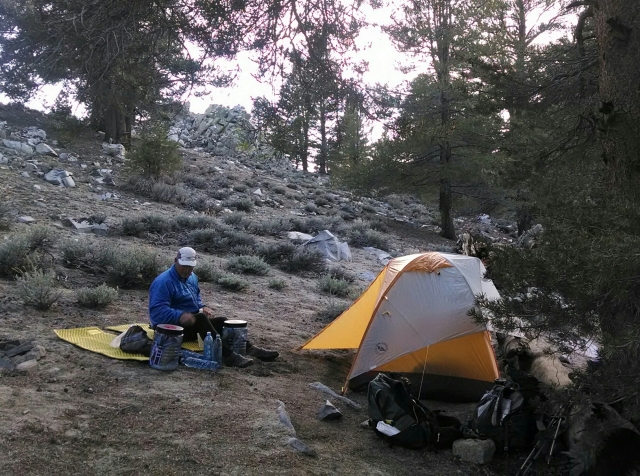