After an awesome nights sleep it was time to walk the California Aqueduct. (This is part of the water delivery system to mostly the LA basin, whose water rights originate from Owens Lake near Lone Pine).  At first we walked along side the aqueduct as it flowed like a placid river through a wide cement canal. 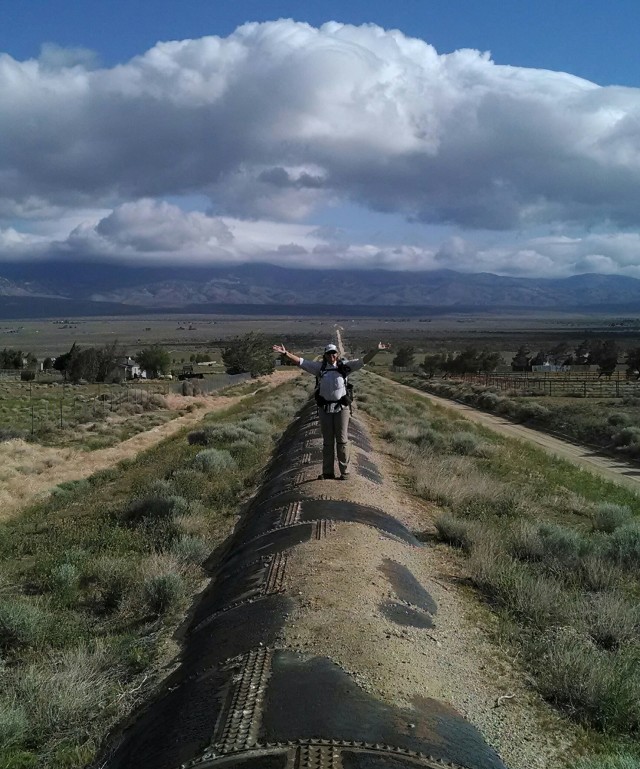 Then we walked on top of it for several miles as it turned and became encased in a large metal pipe.  It didn’t seem that big until we came across a fully exposed section of the pipe.

I'm pointing to a PCT sticker

What an interesting feat of engineering.

The pipe then dipped underground and we walked on top of its cement highway to the windmill farm.  Once on the cement highway we encountered what seemed like flurries of butterflies cascading across our path.  Hundreds upon hundreds continued to flutter past us throughout the day as if playing tag with each other. 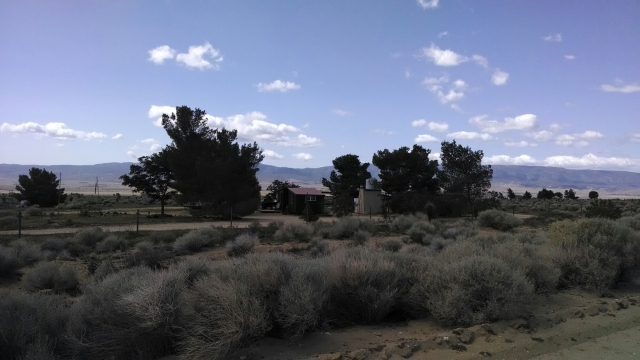 Along the way we saw trail angel Bill and Kathy’s friend Glen’s house and property.  We tried to say “Hello” per Bill’s instruction but no one was home.

The trail moved off the aqueduct and onto a dirt road where we passed a marker indicating we were 1/5th done. 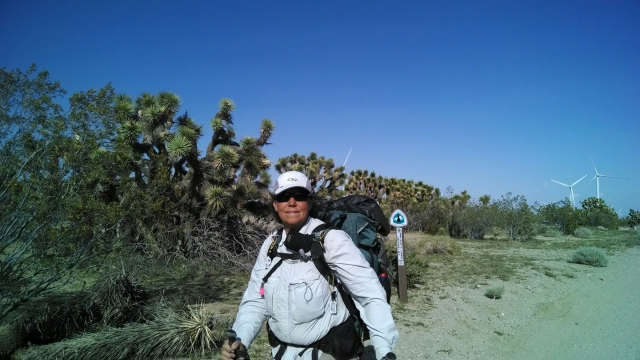 The trail wove through the desert between groves of Joshua trees and windmills.

The temperature rose as we walked through the midday heat to our next water source which amounted to spigot coming out of the aqueduct.  We watered up and rested a bit to see if we could tread a few more miles as there was plenty of daylight, no real place to camp out of the rising winds by the water source, and the temperature was dropping.  We walked for about an hour or 2moremiles and found a somewhat level area behind some chaparral to camp. This was no ordinary location as we were smack in the middle of a windmill farm.

Windmills towered above us approximately 80 feet and because of the heavy winds, they were spinning at maximum RPMs. The wind blew all night, but we were protected mostly by the chaparral, yet we could not escape the drone of the windmills.

6 Responses to Walking on Water