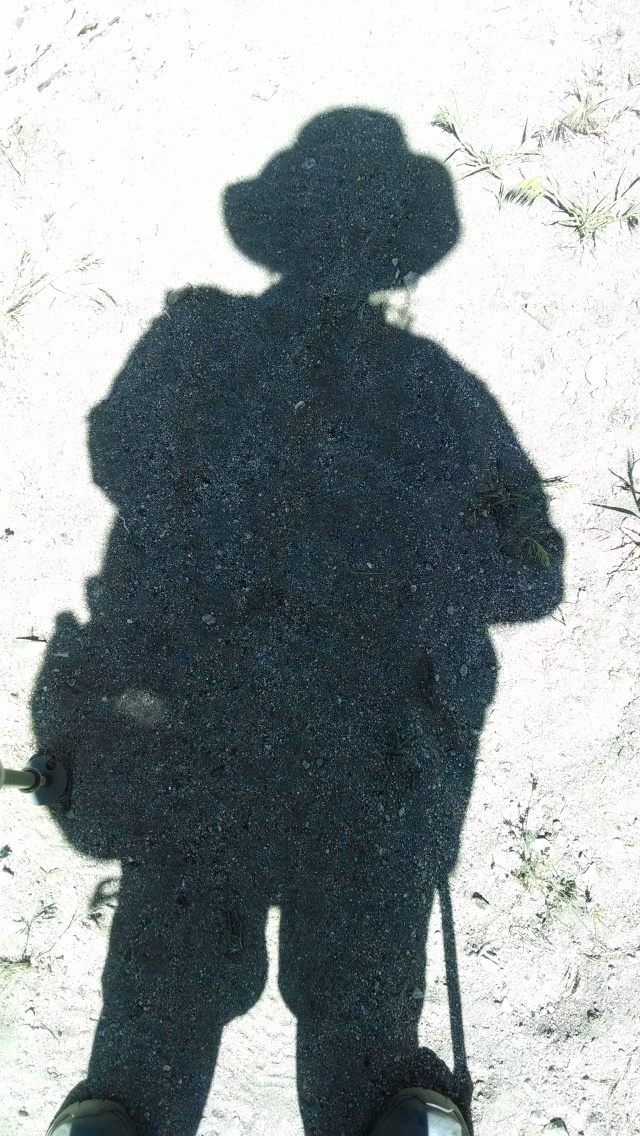 The alarm went off at 5 am because we knew we had a lot of vicious uphill miles to go, and started walking around 6:15 .  We had a 3700 ft altitude gain in 7 miles.  At mile 235 we ran into Recon who was packing up and just about to set out; and Leisure Suit and Little Feet who were just waking and getting ready to continue their SOBO section hike.  We visited with Leisure Suit and Little Feet and they gave us a great account of what we had to look forward to. By mile 241 we had climbed from 5061 ft to 8115 ft.  A side note… When you’re hiking on the PCT we’ve been told that generally the grade is kept “low” so that climbs aren’t too “tough”.  However, this was like being on the stair climber at the gym for 4 hours…quite the thigh burner and achilles strainer.  We were rewarded at mile 240 (around 1030 am) with a picnic area with picnic tables.  Picnic tables are like couches or Lazy Boy recliners to us.  Usually on the trail we look for “comfy” sitting rocks in which to take the load off our feet for a few minutes. A bench or picnic table is almost a religious experience. We each carry half of a Z-rest sleeping pad for sitting on for “prolonged” periods of time as it helps guard against prickly and pokey things.  It might actually be the most used item we carry as it doubles and triples as a “clean” surface to lay our backpacks on, and to stand and change upon. 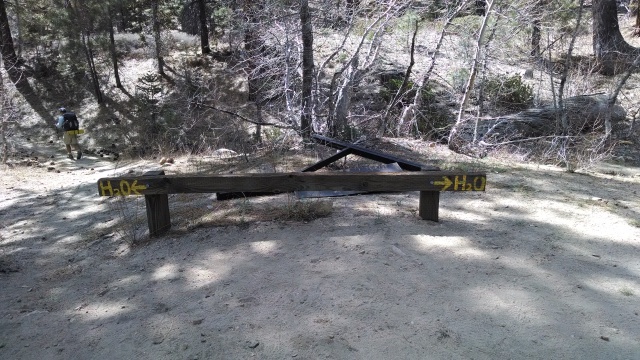 …back to mile 240.  The other half of the reward was icy cold spring water which seeped and trickled softly through the roof of a small (4 ft tall and 4 ft deep and equally as wide) sodden cave, and  into a 25 gallon blue plastic barrel. (I forgot to bring my phone to take a picture and was not about to walk back to it to take one, so words will have to suffice) The secret to getting to this water required you to walk about a 10th of a mile from the picnic tables, past the metal horse corrals and down a grassy path to a marshy area, and Eureka! you see the half cave with the blue barrel. Next to the blue barrel was an empty Crystal Geyser gallon bottle that had been cut in half.  Paul used that to fish the crystal clear water out of the overflowing barrel. As we were living “dangerously”, as it was (no rain gear and our current wildlife encounters), Paul decided the water was “good enough” NOT to filter through our Sawyer Squeeze.  (We’ll let you know how we’re doing over the next couple of days.). The water was smooth and deliciously cold…at this point better than beer…well almost.  We filled our packs with 3 liters for the next 12 miles and drank an additional 2 liters of G2 each (won’t do that again…in one sitting) and had “lunch”. This generally means a ProMeal bar or Pop-tart…something like that. 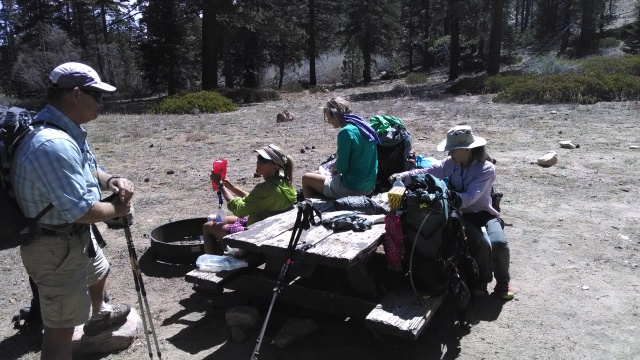 The group that we saw at mile 226 caught up with us and shared our table. 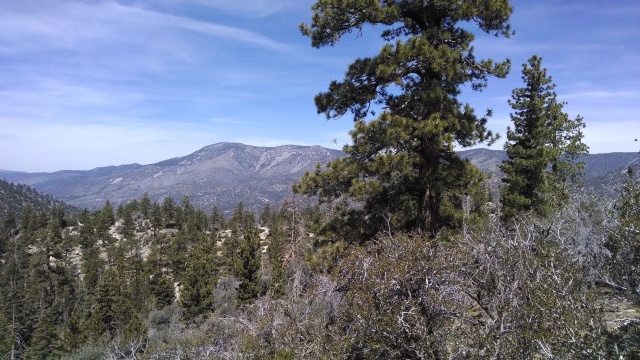 Once we finished our G2 and had changed our socks, we headed off to finish the last 12 miles of what was to be a 19 mile day to Onyx Summit, and a hitch into town. 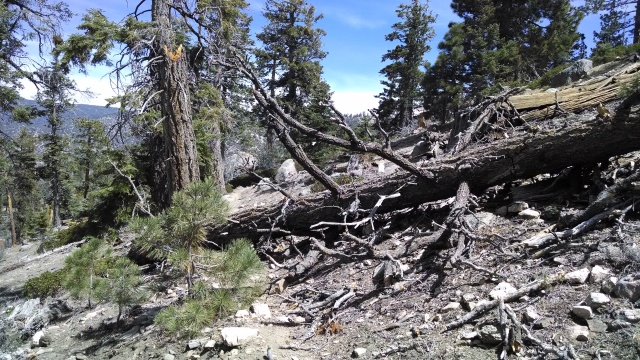 On top of the miles and elevation climb, we had several downed trees which do their best to fall directly across the tail at nearly their greatest circumference and required some navigation over or around.  We chose mostly around due to my issues with “gravity”.  For me, by mile 14, my feet and back were really “talking” to me…and by talking, I mean in “tongues ” (aka…colorful language). 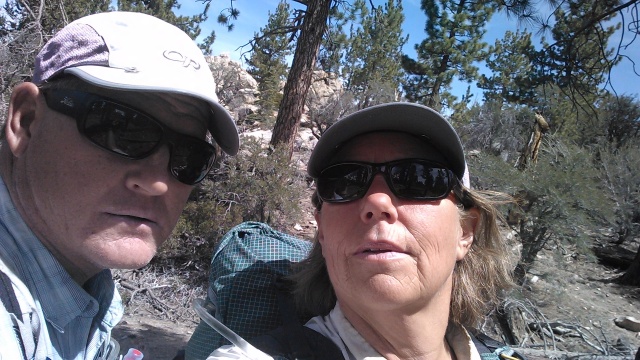 As we had less than 6 miles to go we decided to break it up into, you guessed it, 2 mile segments wherein we would get off our feet for a little bit and have a snack.  This worked perfectly, well as perfectly as it could, considering the only other option was to stop , and why do that when we were so close to our exit point to resupply.. and pizza. 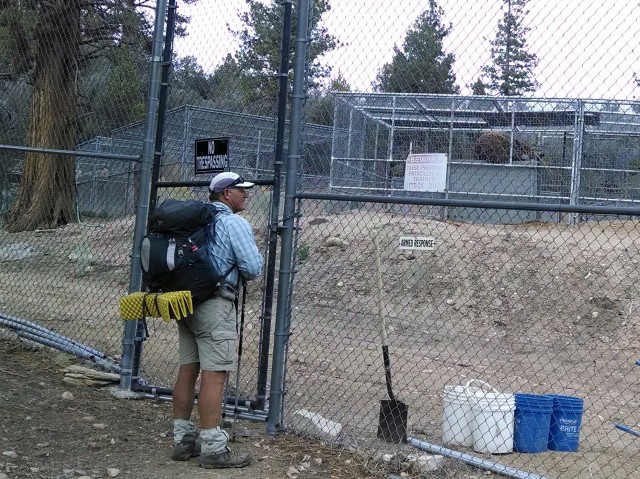 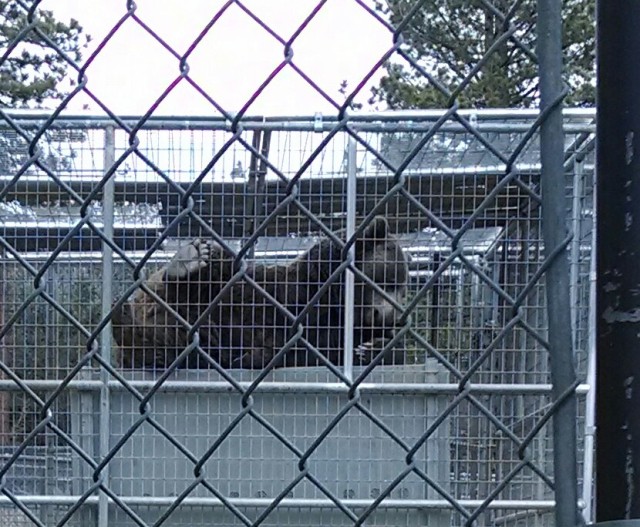 With 2 miles left to go, we came upon cages and a holding area for exotic animals (Lions, Tigers, Bears and a Panther).  Odd place to have such an operation.  Just as we arrived at Onyx Summit we were greeted by signs posted by trail angels “Tiffany” and “Papa Smurf” offering rides and places to stay in Big Bear.  Food, laundry, internet and a place to lay your head were enticing.   We called Papa Smurf because we had heard Ziggy and the Bear talking to him about the water report.  He answered the phone and told us he would pick us up if we could wait 45 minutes.  We waited. One of his sons arrived just in time as the sun had set and it was getting cold.  We arrived at Papa Smurf’s house in Big Bear City to find 4 other hikers (Bambi-who hikes in his underwear… We think his trail name should be Captain Underpants, Nick- who hikes in socks and sandals, “Bambi’s” girlfriend – didn’t catch her name, and another young guy who was a fantastic guitarist).  We enjoyed visiting with them and swapping tales of the trail around the campfire.  We were treated to tacos, pizza, ice cream and cookies, a shower, camp clothes and a place to lay our pad and sleeping bag if we wished.  Since we had planned to Zero the next day, which meant sleeping in as long as we want…and all day long, and the others were going to be up early to get back to the trail, we decided, with the exception of the food, to decline the hospitality and elected to check into the Motel 6.  Papa Smurf’s oldest son Jim, graciously gave us a ride.  It was late (11 pm) when we checked in…too much fun talking, but worth the mileage we made today. 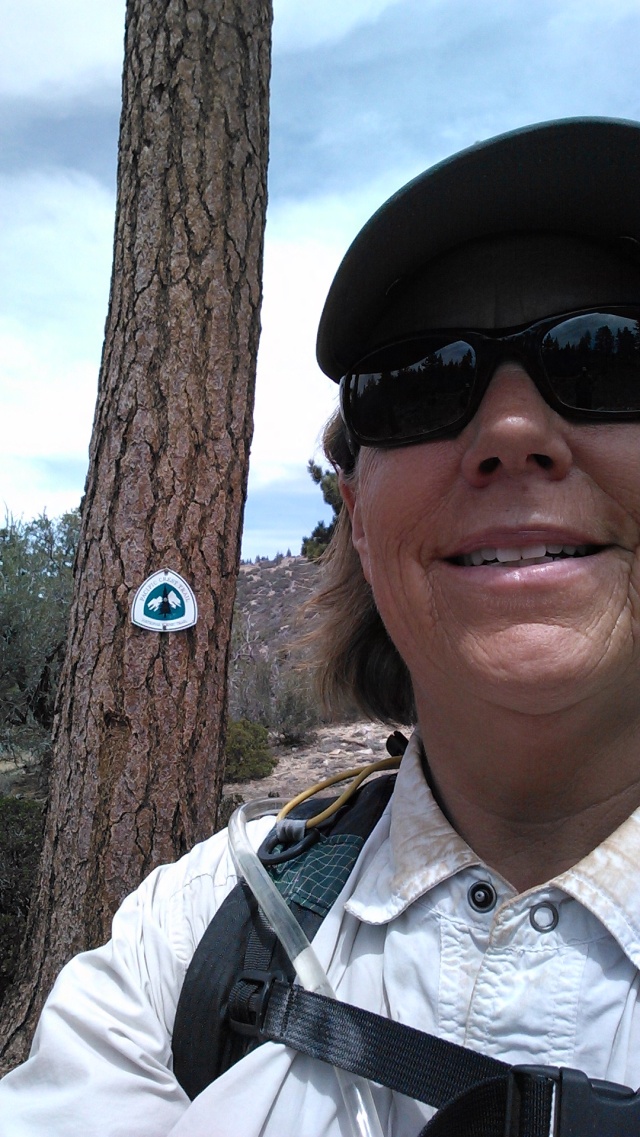