As summer begins to wain, and Fall and Winter will be soon upon us, I realized that I have failed to post this past Winter’s excursion(s).  So before next winter sets upon us and we do a “re-boot” on our “Ikon-ic” winter (provided the snow is epic for the 2019-20 season, and hopefully apply some of the things we learned this past year), here ya go.

So, this winter we had every intension of making the most out of our Ikon ski passes this season. Things started out pretty good with an early season trip to Mammoth Mountain (Nov 23-26, 2018) with our friends Sandy and Steve (aka. Pole Dancer and Scout).

I got a little daring and wormed my way into a “Black Diamond” run only to find that the moguls I was turning off of were sparsely covered boulders (of which I should have known better, but was so excited to ski so early in the season). This required a bit of a repair job to the bottoms and edges of my fairly new skis.

This year’s (2018-2019 season) snow fall, at least for the Sierra’s was on an epic scale, reminiscent of when my children were younger and downtown Mammoth was a mouse maze for months on end. Oddly, it snowed so much and so often that getting to Mammoth was a challenge, with many a trip cancelled or postponed as travel was not recommended or was impossible to ski due to blizzard like conditions. When we were younger, these types of conditions would not have been a deterrent. It would have been an inviting challenge. Now, we are older, if not a bit wiser (an emphasis on “a bit”). February was supposed to have begun a two-month ski-cation, but the snow was relentless, and our ski-cation began in March, with Paul picking me up in Mammoth from my annual ski trip with the “girls”.

The skiing was epic, as was the company and festive activities. A painfully good time was had by all…some more than others…just say’n.

In all my years, I have never seen Mammoth so WHITE and FLUFFY!

As it turns out, when Paul picked me in our Dodge Truck, topped with our 35-year-old, now fully winterized, Alaskan cab-over camper, we got to test our “winterization”, with an afternoon/evening snow storm. We spent a night at the Mammoth RV park, and then headed over to June Mountain, for the day, on our way to Tahoe. It wasn’t until we reached the lot at June and talked with a few people who also had campers, that we discovered that they allow you to camp in the lot, provided you are self-contained. (Note to self for next time). Oddly, in all our years coming up to Mammoth, we have never skied June Mountain. We have been to June Lake in the summer, but this would be the first time we had ever ventured to June Lake during the winter, and the first time ever skiing June Mountain. Even so, we couldn’t have hit June Mountain any better.

The “crowd” was non-existent and several inches of fresh powder coated the mountain. Skiing fresh POW (powder) is like sliding on velvet, with little to no effort and virtually no stress on my knees. We skied so much we actually got bored…if that’s a thing. We literally had reached our “one more run” mark, way before noon. After my bad crash two years ago, that necessitated my religious wearing of a helmet, and conscious attention to stopping before the “one more run” mark, we reluctantly headed to the parking lot.

On our way out to Hwy 395 we made sure to stop at the June Lake Brewing Company for a pint, a tasty burrito from the nearby Hawaiian food truck, and a couple of bottles “to-go”, before we headed toward Lake Tahoe for what was to be a two-week adventure, skiing Alpine Meadows and Squaw.
Alpine Meadows: A night spent in the Walmart parking lot of Gardnerville NV, we headed up the 207 from the 395 and decided to turn right and take the scenic northern route of Hwy 50 to Alpine Meadows.  Alpine Meadows and Squaw Valley although geographically seperate, have essentially co-joined into one ski “area” as SquawAlpine, and for those with the Ikon Base pass, your ski days at these two resorts are unlimited (except for of course the holidays…but then who wants to ski crowds anyways.)

We pulled into the sparsely populated parking lot at Alpine Meadows mid-morning and hit the slopes.

An inch or so of fresh POW coated the gorgeous runs at Alpine Meadows.

Can you see the snow gusting off the top of Ward Peak?

We headed to the top, and were nearly blasted off the cornice by growing and gusting winds from an incoming storm. We skied to exhaustion, and did our best to finagle a way to camp overnight in the lot at Alpine Meadows, but overnight camping is strictly verboten! They did tell us of a lot a Squaw Valley that “allows” over-night (self-contained) parking, but we were not able to locate the lot with confidence. We suspected we found the lot, but didn’t want to risk being woken up in the middle of the night to move…during a snow storm. Normally we would stay at a campground, or on US Forest Service or BLM land, but it was all inaccessible and covered in 30+ feet of snow! As luck would have it, we discovered a nearby RV lot in Truckee (Truckee River RV Park)with a space available for us for the night. We headed back to Alpine Meadows for another look at the ski area, in an effort to ski all the runs…at least once. (map pictured above courtesy of skimap.org )  We just about pulled it off.

Half-way into the day’s sparsely populated ski runs, we got a frantic and tearful call from our daughter. It appeared that Bruce (our 15 year old dog) had a brain tumor and per our Vet (for whom our daughter works for as a VetTech), Bruce most likely wouldn’t last the week if he failed to respond to the now prescribed medication. SHIT! And we were planning to head to Utah once we had finished skiing for the day. For the love of Bruce, and our daughter, we altered our plans and headed home. A stop for fuel in Carson, revealed that our fresh water pump switch had somehow been knocked into the “on” position and was in the process of flooding the interior of our camper. Good thing we were headed home, I guess. On our travel home we decided to search for, a suitable “ski coffin”, like the one we had seen on a truck, similar to ours, in the June Mountain parking lot. 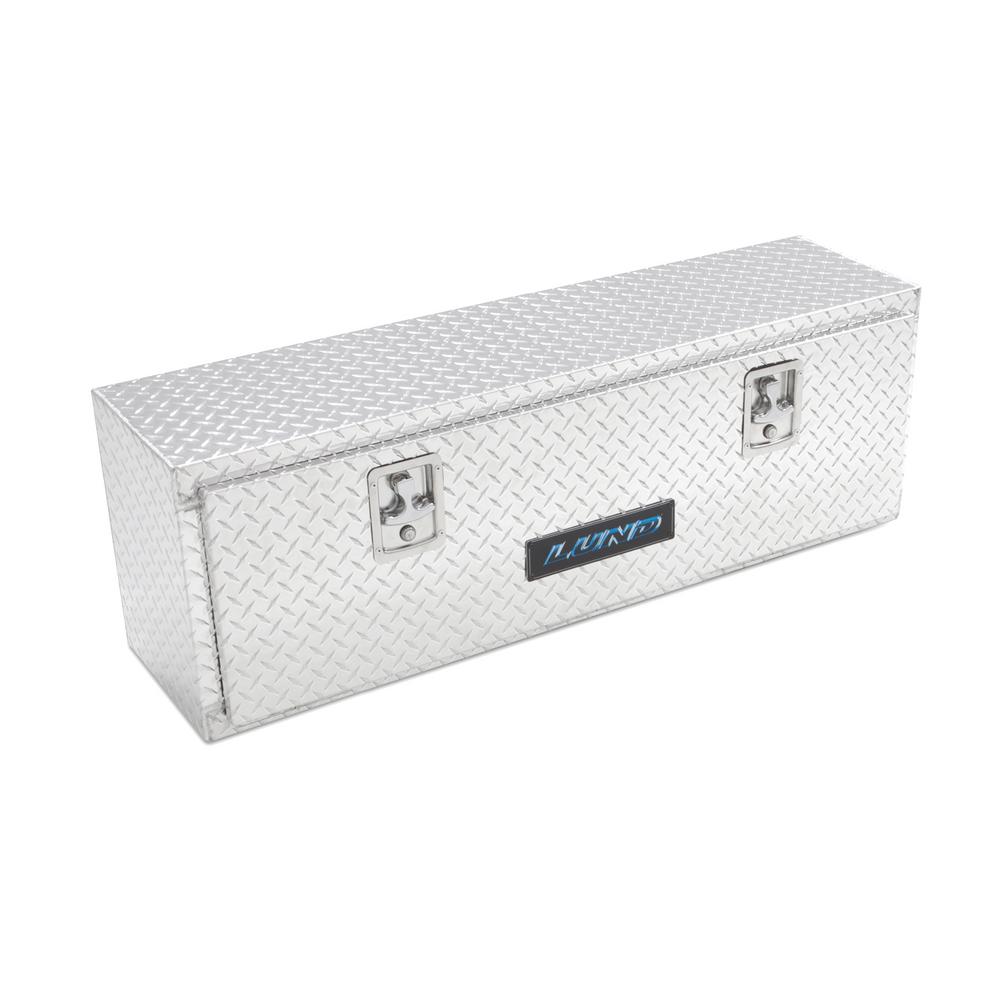 This would free up room in the cab of our truck and be a more efficient way of storing our ski gear on lengthy travels. In the summer, it would morph it into a fishing/hiking gear – “coffin”. We ended up ordering it through Home Depot, but any way you sliced it, it was going to be 10 days before it would arrive anywhere. As we hoped to not be home more than 10 days, we set its delivery for pick-up at the Home Depot at Park City, Utah. When we got home, our dog Bruce was literally “circling the drain” (making tight right turns – if it were left turns, we would have nicknamed him NASCAR for his final days). Apparently one of two things were going on his brain. He either had an encroaching brain tumor, idiopathic vestibular disease, or both. He was already in the throws of “Sundowners”, a derivative of canine Alzheimer’s, and virtually blind, but his quality of life was still good. He would play with a ball (once he located it), ate a drank heartily, and still wanted to walk down the street to check his “pee-mail”. This sudden onset had us now evaluating his quality of life, as he now would spin in circles to the point of losing his balance. Everything was a right-turn circle pattern to find his food/water dish, his bed and pee spot. We were seriously conflicted on what to do, and didn’t want our ski-trip to influence our decision, so we waited the 7-days of the medication, and saw marked improvement, but we didn’t want to leave before he showed continued improvement and stabilization. Inevitably however, we were going to have to get on the road, as we still had to be up in Washington by April 5th, as I had a water polo tournament to officiate…and we wanted to at least ski Deer Valley before it closed for the season. Luckily, Bruce improved enough for us to finally head out…2 weeks later. On the bright side, this gave Paul an opportunity to “blunder proof” our fresh water tank switch, make modifications to our hitch basket for the mounting of the “ski coffin”, and collect the tools to mount said “ski-coffin”.