So staying in a hotel was a good idea. It rained all night and got down way below 20 degrees, which is what my bag is rated to, so that and hot shower made it an even better decision. After our complementary hot breakfast with “endless” coffee, we were on our way. “Martha” our directions app, failed to alert us to our first option that would take us to Faith, South Dakota, and from there to the hunting “lodge” (Grand River Lodge) where we would be hunting pheasant out of for the next two days. I think it had to do with the fact Paul had “muted” her when she insisted on re-routing us each time we made a turn out of the Cabela’s parking lot (in Rapid City, SD) on our way to the hotel last night. She had been unmuted, but to spite us failed to “speak up”. 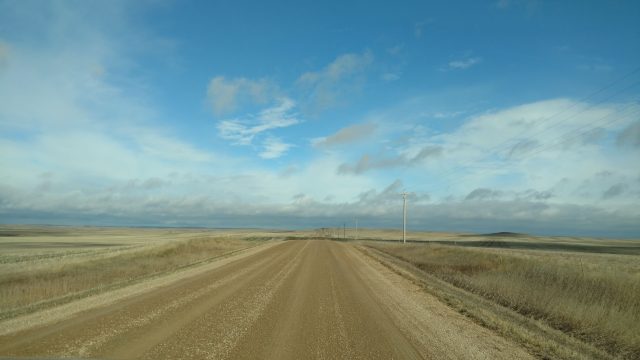 Thus having missed our initial turn, we were relegated to her “alternate route”. We have found that back-tracking to take the “original” route usually results in a few “dead–ends” just to remind us that “she/Martha” often holds our fate. As such, “she” took us on an alternate route over well maintained, yet unpaved, and now muddy, county roads. While I’m sure this was the “longer” route, it was by far the most scenic for us. We passed through wide ranging ranch land, most of which having been staked out as homesteads during the push of civilization to the West in the late 1800’s. Rolls of hay and fields of smaller faced sunflowers (used for oil and harvested once they reach below 15% moisture) bracket our moistened roadway. 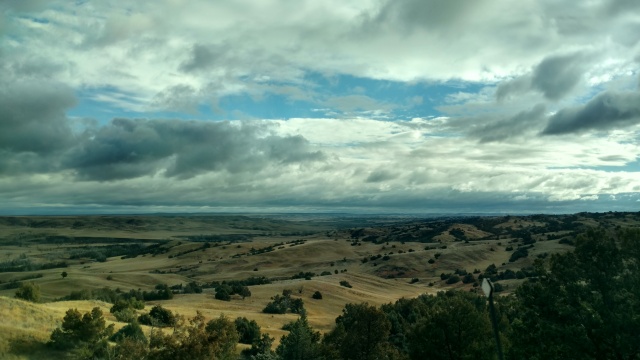 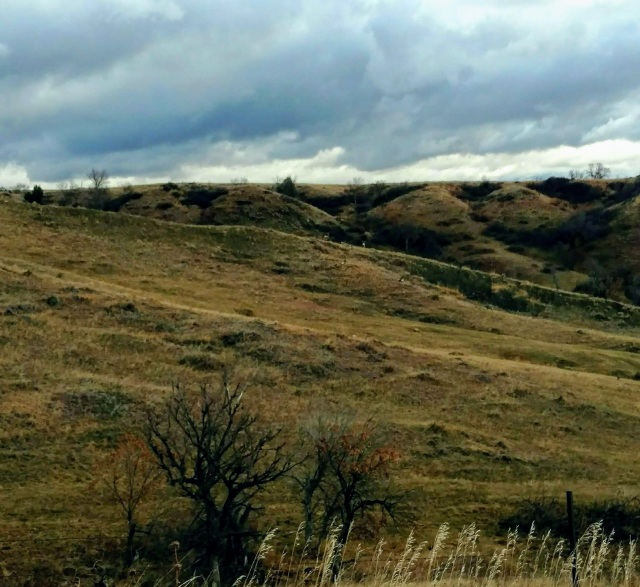 White butts scamper away, knowing full well they are within our range. Lucky for them, this is strickly a Pheasant hunt.

White butts of mule deer with massive racks taunt us whilst in the folds of the landscape where it seems the remaining trees survive or flourish. The wind is more than brisk, and nothing less than bone chilling. Eventually we arrive in Faith where we do our grocery shopping for this hunting adventure. 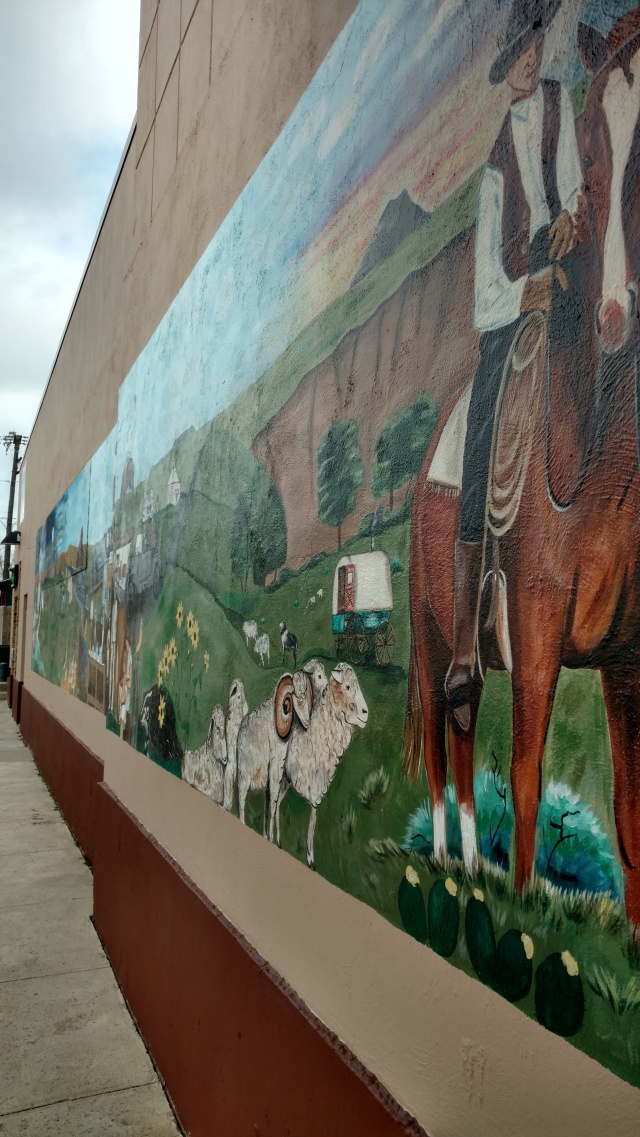 The distinct smell of 8000 cattle and the echo of an auctioneer can be heard over the roar of the wind. We complete our shopping, and looked for a liquor store in order to complete our resupply. Here, liquor is sold separately from food items, and next door to the market is the town’s liquor store, “Package Liquor”. I walk to the store’s door while Paul loads our groceries. The door is locked. It is well past noon, on a Monday, so I’m a little perplexed. Then I read the sign. “Monday – Thursday 8-4, call this number”. Of course the area code is not listed, but I have 4G and can look it up. I call the number, and the woman on the end of the line answers, “Faith City Hall”. I tell her I’m from outta town and the sign on the liquor store said to call this number. “Oh, you’re at Package Liquor, we’ll send someone down to open it up for you”. 10 min later “Patti” arrives. Paul being the comedian, asks her if she is the Mayor, seeing she was coming from City Hall. She chuckles, “No, I just work at City Hall.” Having selected our “poison” we make our purchase and continue to talk. We ask about the area and its industry, and of course…hunting. She graciously offers us names of local ranchers, including her and her husband that allow hunters on their property…some for a fee, others for none. Once done, we call and check in with our friends to see where they are. We are all within an hour or so of each other and plan on meeting at “Flat Creek Rd.”, which according to Martha does not exist. Not to worry, we have no problem talking to “strangers” and asking directions. We drive over a bridge called “Flat Creek” and figure the road must be somewhere close. In actuality it is, but it takes us several passes of said road to figure that out, as it has no road sign posted. “Martha” eventually points the way. We wait in an icy wind, and talk with local ranchers who pass by, asking if we are okay…or lost, considering our California plates. One particular rancher, Gary, stops and spends considerable time helping us figure out where we are supposed to go. We talk hunting, and he tells us that the pheasant population is down nearly 90%, due to the drought conditions they have been experiencing the past few years. Uh Oh! This explains why Brian’s friends told them they recently came back with nothing from their North Dakota pheasant trip. Gary talked of times when they’d get 200 birds a season…each! Heck, we only want 15 between the two of us. Gary assures us that we’ll be able to come home with something, as he is familiar with the Grand River Lodge, and Roy the property owner. 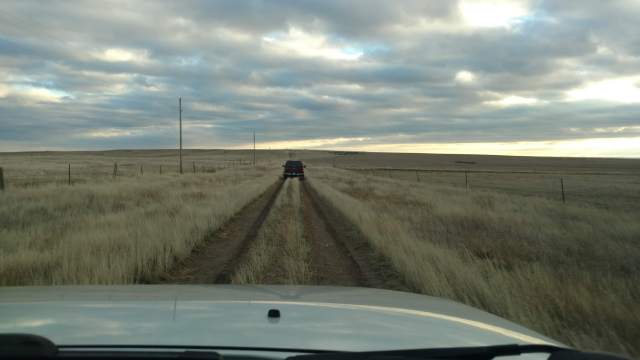 With the sun beginning to set, and proper directions, we “saddle up” and “wagon train” it to the Grand River Lodge. (Turns out that the website directions are correct, Kenny had transposed the numbers on the address, hence our befuddlement and “Martha’s” crazy directions) 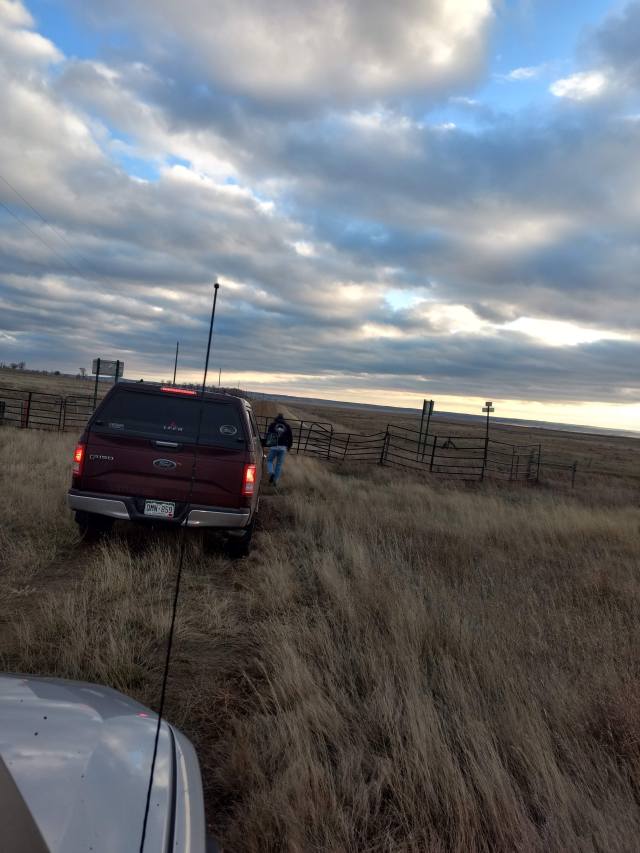 Through a gate or two and a half an hour later we pull up to a compound with three separate houses, one of which is the “Lodge” we will be staying at for the next three nights. A sign on the door asks that we remove our boots.  How’d they know our boots would be muddy?! We enter the building and find it sparsely appointed, but not lacking in necessities. The seven of us have the place (which sleeps 12) to ourselves. Excellent! We pick our rooms complete with twin (think dorm room) beds with RealTree camo comforters and pillows. Yup. This is a lodge for hunters. Once unloaded we make our dinner (we have chosen the “no frills” package). Roy comes by after finishing his Ranch chores, saying he’ll come by around 10am and take us out to where we are going to hunt for pheasant. 10 am? Could this get any better? Normally we are up at the ungodly hour of 4am to prepare for the day’s hunt. I could get used to this hunting hour, and then I learn that you can’t hunt the pheasant here until after 10am. Either way, it’s a morning “win” for me. Hopefully it will “warm” up a bit by then, cause it’s 19 degrees now! 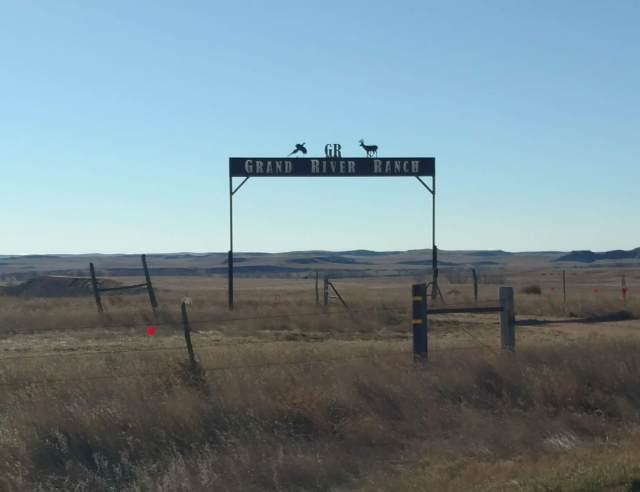