Seeing as Monday was 10.5 miles and Tuesday was 7.8, and we know that our final mileage from Glen Aulin to Tuolumne Meadows is 6.4, we should only be left with a scenic 6.5 miles in which to gain 2,320 ft that includes three major waterfalls: Water Wheel, California, and La Conte Falls. Considering that the map’s trail mileage has been off consistently by 2miles, we decide to mentally tack on 2moremiles to our days’ proposed mileage, making it a little over 8 miles, just so our brains and bodies are prepared for more than a hopeful 6.5 miles. 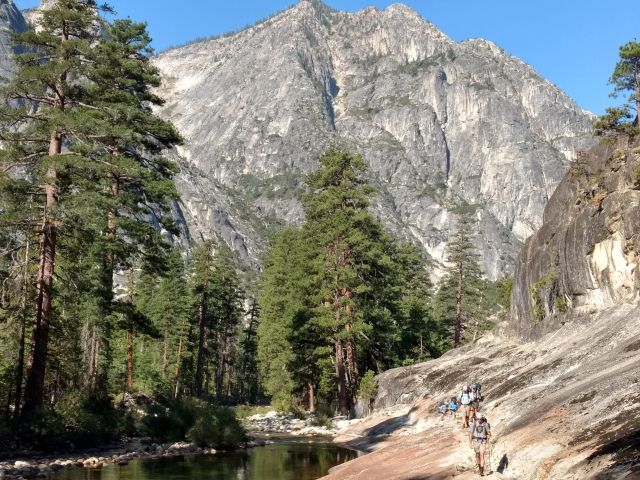 We walk atop solid granite, along a constantly flowing river, whose sound, smells, colors, shapes, lighting and movement cannot truly be replicated or captured by words, video or photos. 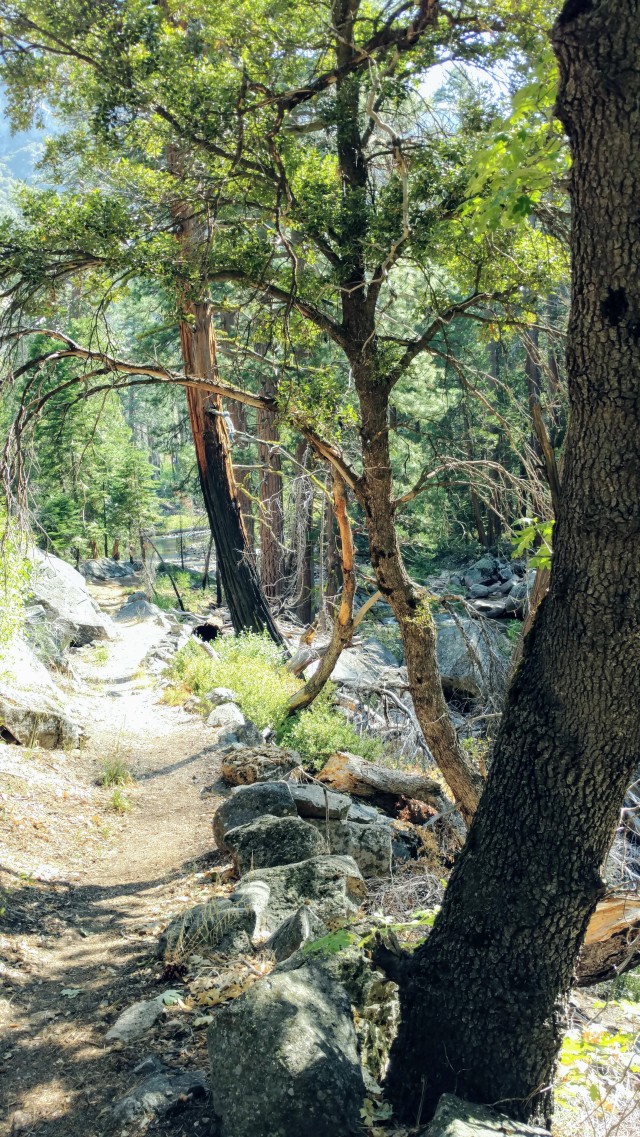 It is an all encompassing sense of beauty and wonder that touches each of us, in profound and individual ways. 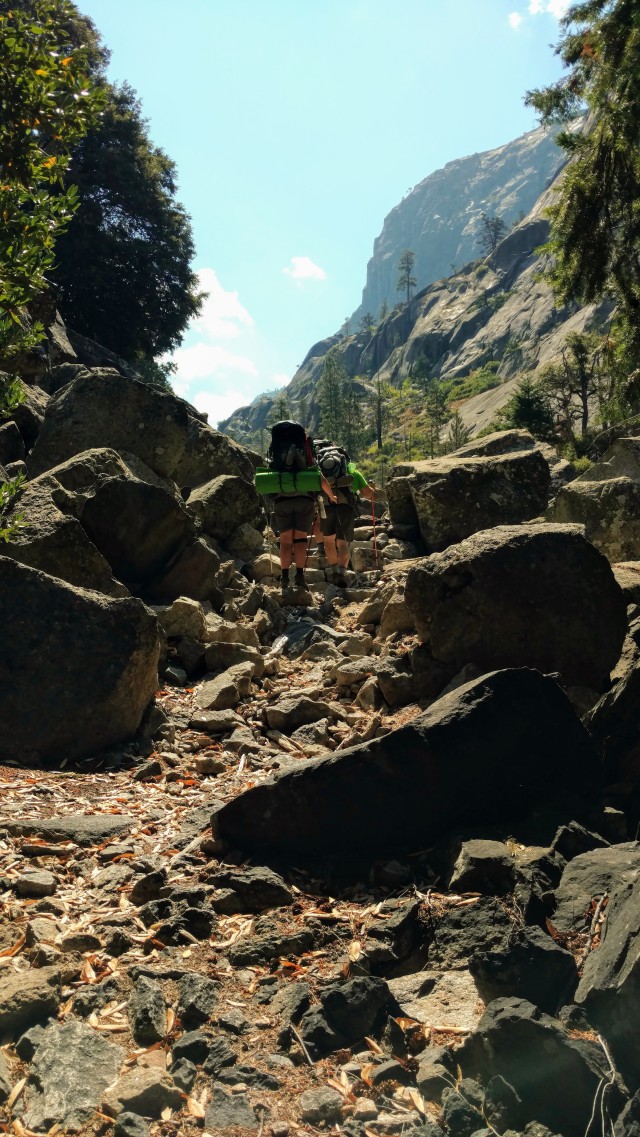 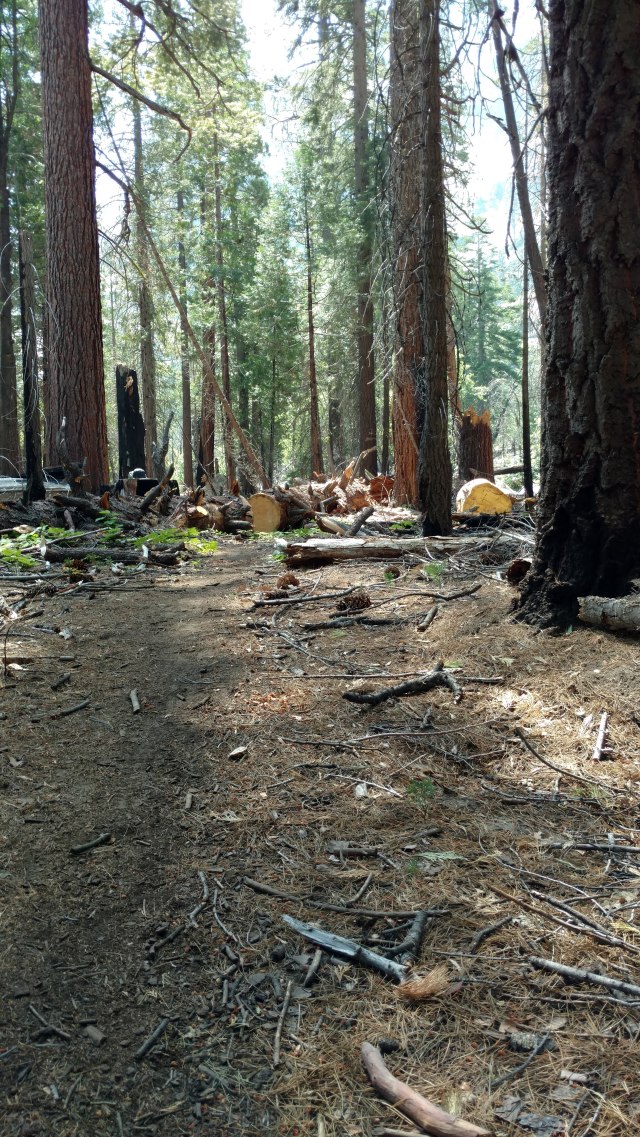 Eventually, we turn back into the woods where it appears logging, or more likely, purposeful thinning has taken place to ensure the health of the forest. The fallen logs will, in essense, “feed” the canyon floor. 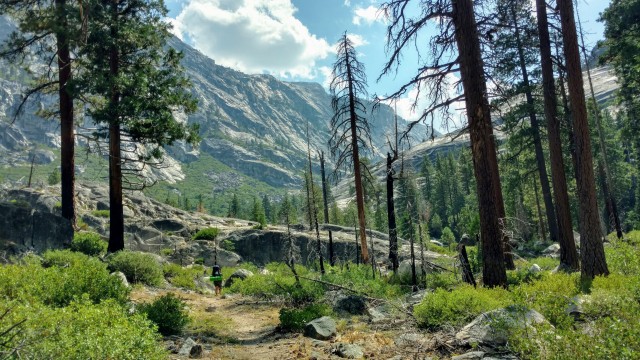 As we walk through the canyon, tall trees stand watch like sentries high above us on the edges of the steep grey streaked canyon walls, monitoring our progress as we meander through the trail. The theme music from Game of Thrones now plays in my head. “Winter is coming”, I can’t help but think. It is obvious at times, that the water flow and volume of this river have been significantly higher and equally ferocious. 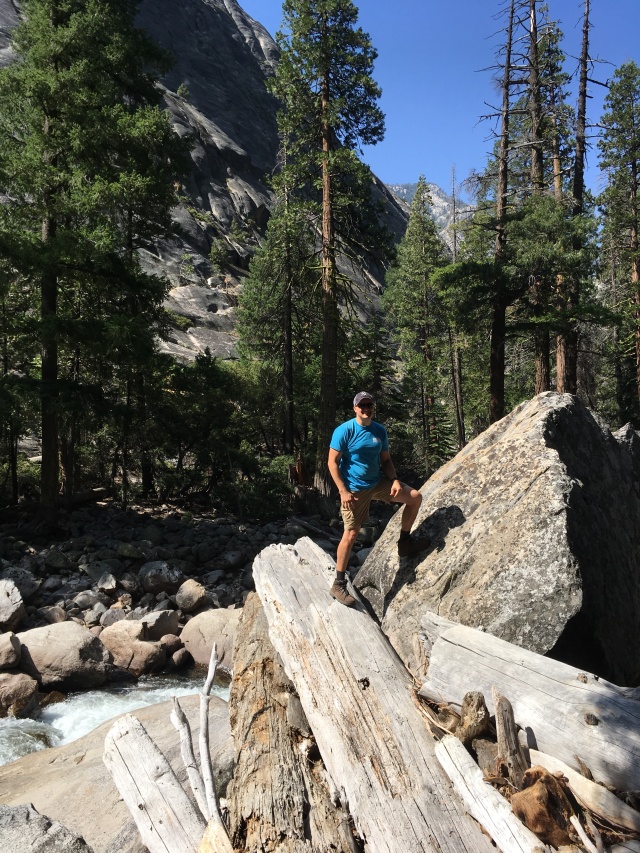 Up-rooted trees are wedged between and under massive granite rocks. Piles of debris, trees, branches and smaller boulders, litter the edges of the now “softly” flowing river. Intermittently we walk in patches of fine sand, leaving welled footprints as we go. This place is magical.

I spend most of the day walking “alone” as our group stretches and contracts in what seems like a natural rhythm. I make a point to walk quickly through the sunlight and linger in the shade. As I walk, only the creak of my pack and the errant clank of my poles on the rocks and roots beneath me break the silence of the forest. It is as tranquil as an empty church, and here I am drawn toward self reflection. I think of my friends who have the courage and chutzpah to venture out on these types of journeys solo, and wonder if I could do the same. I imagine I could and would, as there is something endearing about having these vistas to oneself and the tranquility they conjure, but these very sights, sounds, and majestic views beckon to be shared and admired. It is here that I’m thankful for my husband and friends who accompany me on these jaunts, my father who introduced me to the “art” of playing outside, and my mom who had an incredible sense of adventure and wonder.

With another morning start once again near 9 am, it wasn’t till around noon that we stopped at an inviting swimming hole for lunch. Just as we are about to explore our swimming hole, Paul spies a bear heading to the water, initially in our direction. Paul greets him with, “Hey Bear!”, and the good sized rusty brown colored bear looks up, sniffs and continues in the other direction down river. 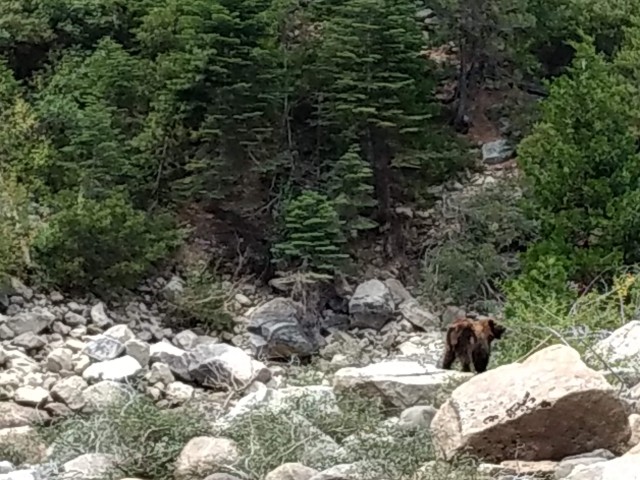 I’m not particularly sure if it was the “Hey Bear!”, or our stench, that sent him packing though. Once we were comfortable that the bear was on his way, a swim and lunch were in order. The water was significantly colder than yesterday (and the day before), but a slide (even if it’s short) into a crystal clear pool of water with it’s frigid version of a lazy river beckoned, thus we frolicked all the same. 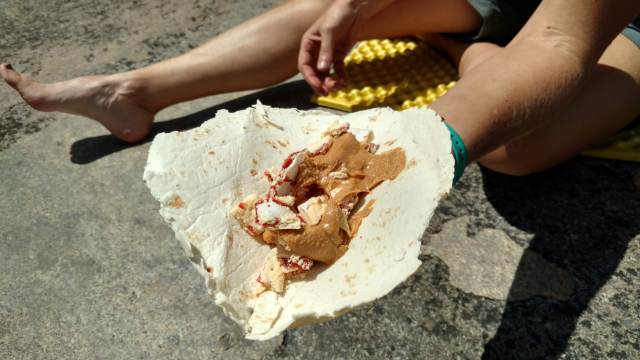 Meals of unique remaining ingredients are concocted and consumed with delight. At this point we think we have only around 3 or 4 miles to go. Sadly, we were SO WRONG…and we didn’t know that…just yet. Rejuvenated and hydrated we begin our ascent out of the depths of the canyon floor. 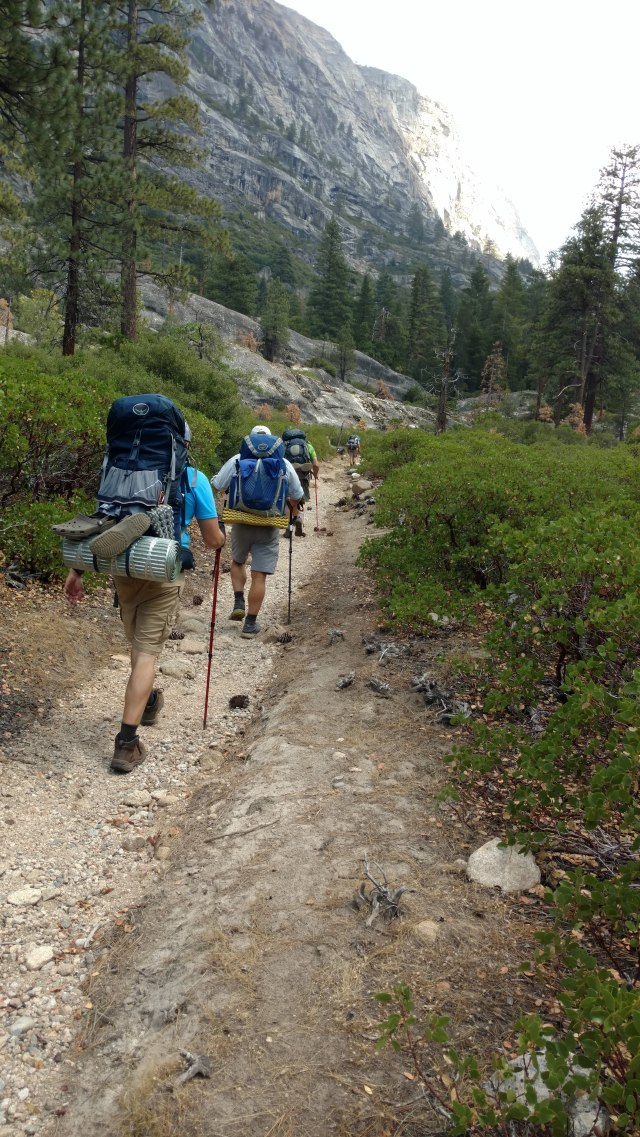 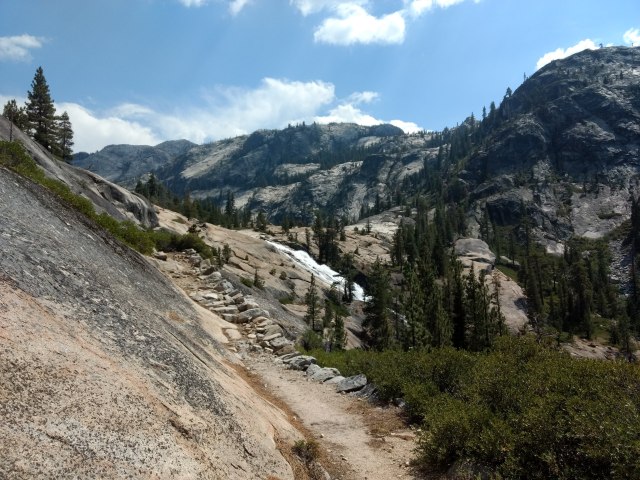 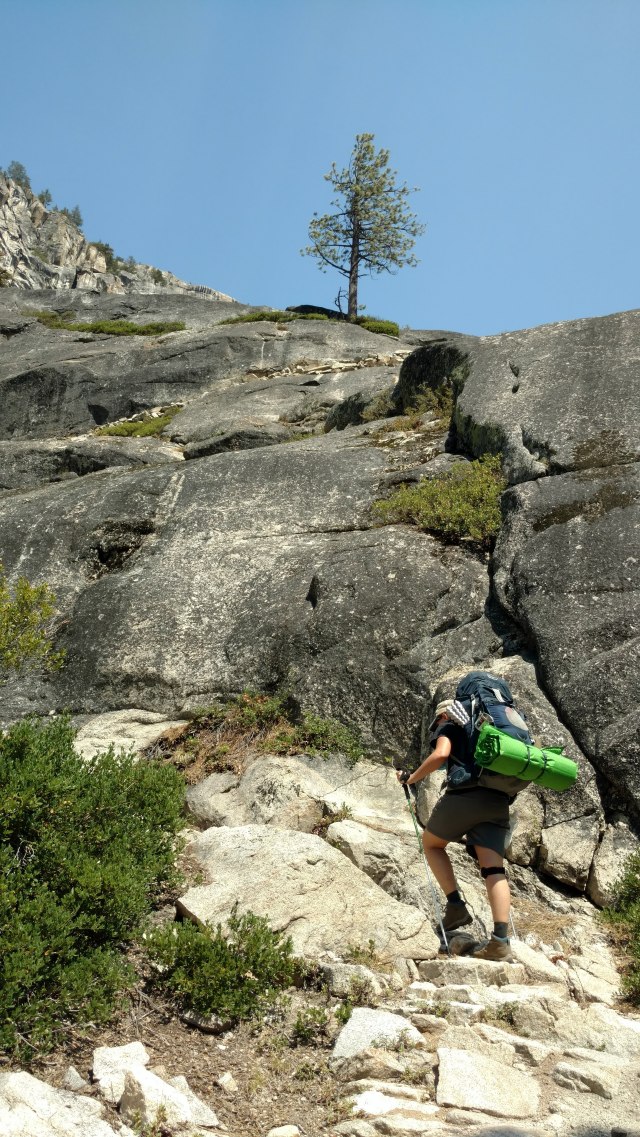 We reach water wheel falls after a zig-zagged rock step staircase, to yet another “landmark” tree perched high above us. 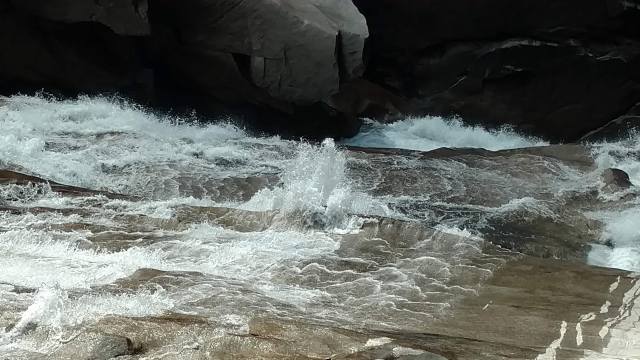 The falls are amazing, and we see how the rock has been worn and smoothed with “curbs” that under a more forceful flow would create enormous “wheels” of water ( I saw them once on a “California’s Gold”, Huel Howzer special). Paul and I make a note to return again…earlier in the summer months when the Sierra melt is in full force. We linger here a bit, but decide not to swim, as we are halfway into our day, and think swimming at the falls at Glen Aulin at the end of our day may be a better idea. 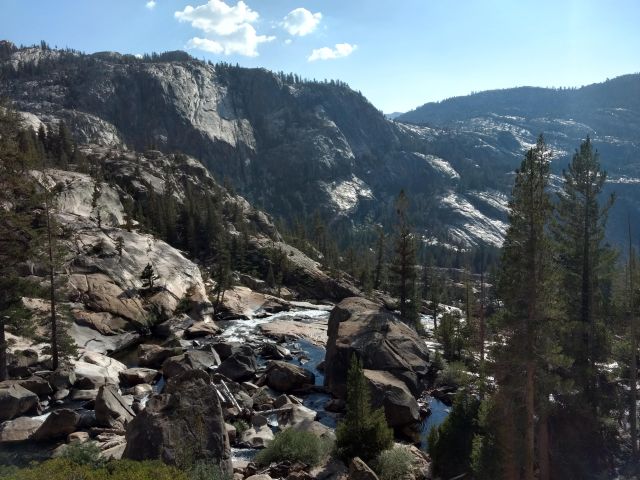 We climb yet again to the crest of California Falls, which looks like a giant churning water slide, but with a steep drops too tenuous to attempt.

More climbing, and we have only gone a total of 6 miles, but are now at the La Conte Falls, where we stop to take a break. 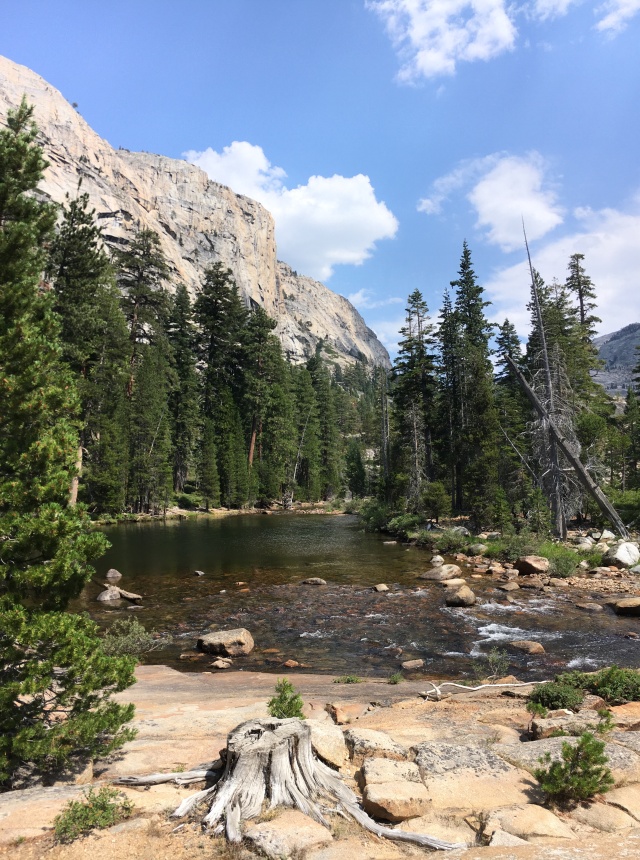 Towards Glen Aulin, and the “top” of La Conte Falls that will continue to the right

Based on our map, and my EarthMate app when I plug in my current coordinates and our end goal it reads, Glen Aulin. 2.5 miles. Certainly doable in no time with appropriate motivation. I, however made the assumption that it was giving me the distance on the trail. NOPE! It was as a “crow flies”, WTF?! But of course, I didn’t figure that out until, well we had gone 2.5 miles and we still weren’t there. (I gotta get better at this, especially if I want Pole Dancer to keep coming on these adventures.) Another “elevator rock” nearly took her knees out. Luckily her poles held and her RockTape (in backpacking, everything should have a dual use…teehee) kept at least one knee from being skinned…badly. 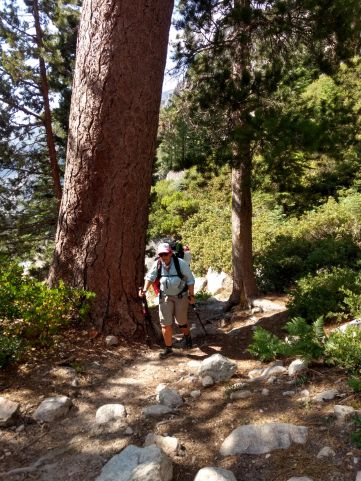 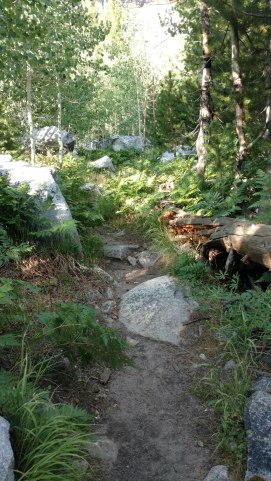 After La Conte Falls, the terrain “flattened” out to soft needled tread with calm, mirrored bodies of water to our right. 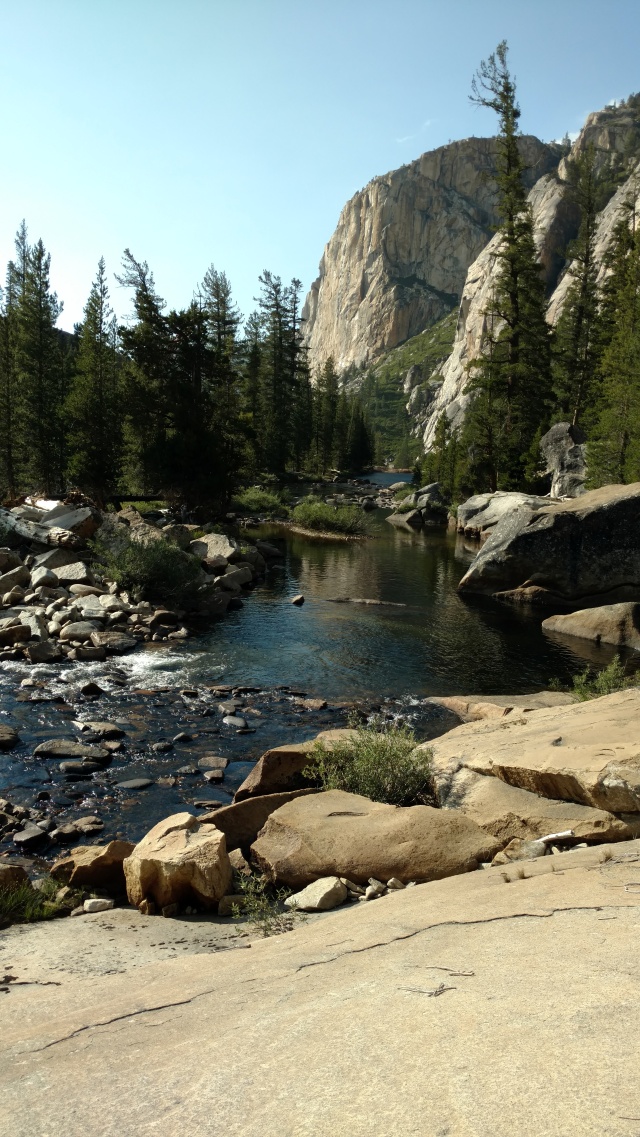 We should be there soon, we surmise, and “off to the races”, like horses to the barn, go Josh, April, Katie and Kaleb. Paul hangs with me, while Ken, Scout and Pole Dancer bring up the rear. By now, we have been passed by a total of 10 people headed to from whence we came…maybe not that far, based on what they were carrying. So reflecting on our trip thus far, I’d say in total, we have had more than 90% of this amazing journey to ourselves. How did we get so lucky? 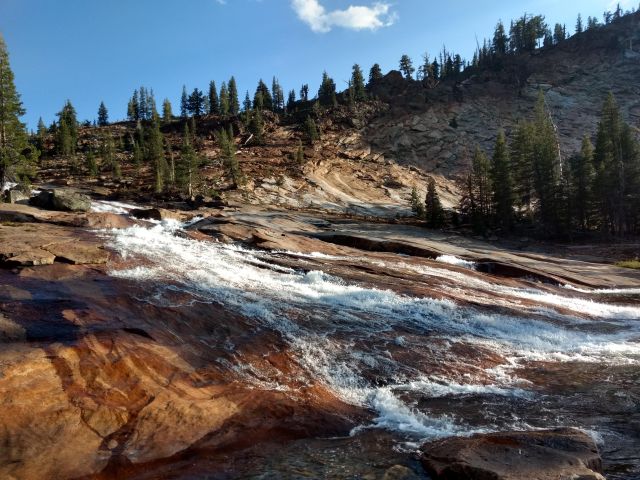 By now, even with proper hydration and the “visual heroin” of a seemingly endless enumeration of “minor” waterfalls, after the “Big Three”, I was dragging ass, big time. I saw many a viable and swim worthy campsite along the way, and wished that we had stayed more together, but then the pull of a genuine pit toilet is sometimes like a magnet after a couple of days squatting in the woods. 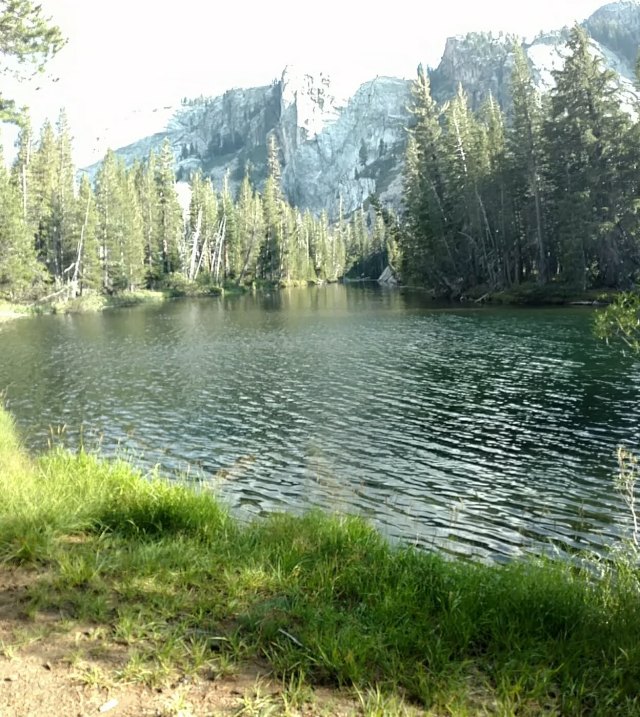 So onward we shuffled. At some point along the way, Paul disappeared ahead of me, so I walked with Ken for a bit. Soon he too was too tuckered to continue without a break and found a perfectly good “sit log” upon which to rest and wait for Scout and Pole Dancer. I told him I would continue on and send the “boys” back to grab his stuff. On I marched, for another 30 minutes, and still I had not reached Glen Aulin.  WTF?! My shoulder was aching in near intolerable pain (too much use of my trekking poles), and felt slightly out of socket (it does that sometimes). I took out my phone to see where I was on the trail, and it went blank. I took that as a sign to stop, take the weight off my shoulder(s), sit down right there, recharge my phone, and more importaintly take in the beauty that surrounded me. Another “minor” waterfall spilled into a mirrored pool of fresh water. Its’ fish were just starting to jump, and the sun was lowering in the sky.  There was not hint of civilization in view, or earshot. I was alone in the woods, tired, sore, but happy, drinking in the solitude, because I knew that soon we would be returning to “civilization”. The solitude was reminiscent of how I feel when deer hunting, wherein you melt into your surroundings, allowing your sense of sight, smell and sound to heighten. You’re at “one” with your surroundings. The day could pass without a solitary deer worthy of harvesting, but it would still be a remarkable day. I decided, I would wait here for the rest of the crew (Ken, Scout and Pole Dancer), and if they didnt want to go any further, I was perfectly happy to camp where I sat. (Actually maybe just a little closer to the water, to look for fish and maybe a swim). I sat there for a good 30 minutes, and above on the trail (cause of course there was another “climb”) appeared Josh, trotting my way. He asked if I was okay, and I was, so he continued down the trail to check on the status of his dad, and the others. Soon thereafter Paul appeared. He asked what I was doing. I told him about my phone and my shoulder. Without hesitation, he shouldered my pack, saying, “You’re almost there. It’s just over this rise”. Of course it was! Just prior to Josh and Paul appearing, my phone had charged just enough for me to figure out exactly where I was. Oh, the irony! I took my time however, on the final ascent into what Paul described as a “pretty full” campground, not because I wanted to delay my interaction with humans outside of our group, but really, because I was just that darn tired! In a little over 10 minutes our elongated “slinky” of a group had contracted once more and came to rest in a perfect campsite, with running water and a toilet nearby. 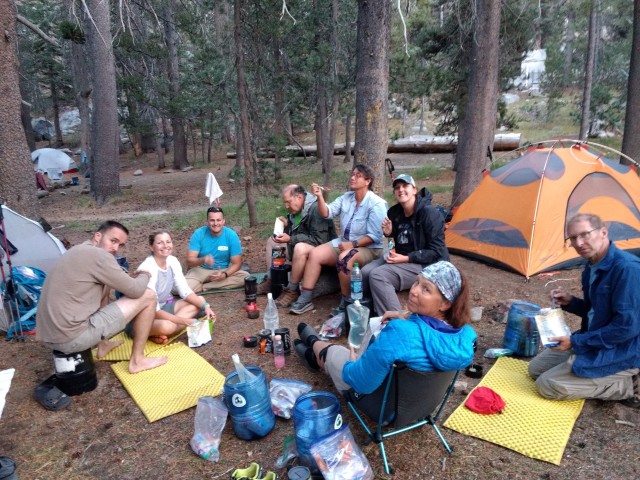 We completed our set up, and with our remaining energy ate Mountain House dinners, “seasoned” with our remaining Tapitio (like bacon, Tapitio makes everything taste better). Because it was our last night, storytime was a MUST. After we filled our bellies, Scout read a perfectly appropriate tale of a John Muir foray into these exact areas, filled with the climbing of waterfalls and mountains. He (Muir) too, found their abject beauty barely describable by words.

Later that evening, we ran into another couple who had done the exact same trail, and started on the same morning as us. Just like us, they thought they had this trail all to theirselves. Remarkable how a span of an hour or even 10-20 minutes can create a feeling of solitude. Life is good!

As I drift off to sleep, I realise we have, in all honesty, barely scratched the surface of this soul filling, awe inspiring place. It is a mere “snapshot” of the expotential beauty God has created, and how one would be remiss not to share with, or encourage others to seek out their “snapshots”, if only to re-center one’s soul.

*Did I mention that the days’ total mileage was 10.1 miles. 2moremiles, of course, longer than we had thought.

2 Responses to Too many waterfalls?…Never!