If we thought a successful climb of Half Dome was the end of adventure, we were sorely mistaken.  Once we reached the Valley floor, we had the issue of getting back to our cars in Tuolumne Meadows.

The walk to Yosemite Valley was a pleasant downhill walk.  The closer we got to the Valley, the more people we began to see.  Some, in our opinion, seemed woefully under-prepared for their one-day, round trip, climb to Half Dome.  Namely, they were not carrying enough water, or appeared to NOT have any way in which to filter once they reached Little Yosemite Valley where they could fill up at the Merced River.  Maybe they think the water is parasite free because it is clear and cold.  Having suffered a lengthy bout of giardia during our 2014 PCT thru-hike, I/We will never be without a filter again, nor trust “icy cold” “clear” water. 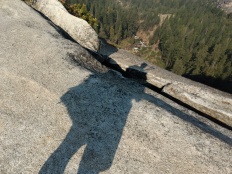 By the time we made it to Nevada Falls (which is a 591 ft/191 m tall water fall), we had seen at least 10 times as many people as we had seen over the past 3 days!  Nevada Falls, for those heading up from Half Dome Village is the last “drinking fountain” and opportunity to fill up water bottles or water bladders without the need to filter.  Even though there is a restroom facility, there was evidence a-plenty of people failing to follow Leave No Trace (LNT) principles. So sad.

My Ansel Adams impersonation and the “back-side” of Half Dome (the “white rock” in the background).  We could see climbers working their way up (from left to right)

We took a short break to check out Nevada Falls and gaze at the “back-side” of Half Dome and the apparent climbing route, before we continued our trek back to “civilization”.

A “frontal” view of Nevada Falls, as we look back from whence we came.

As we continued down the “wide” trail of engineering amazement, you could see evidence that this route at one time had been almost fully paved with asphalt, all the way to Little Yosemite Valley.

We wondered whether at one time vehicles or wagons traveled this route.  Highly improbable now, as it is fairly rugged in parts.  The morning was warm, and we did not envy the people headed up the trail.  We pass a Ranger heading up to check permits for people climbing Half Dome.  Having told him we hiked it the day before, he asks if we “mind” if he checks our permit.  Paul of course replies with a smile, “Yes I do mind, cause I’ll have to take my pack off to retrieve it”.

The Ranger then insists that he get it out, even after we tell him that we were checked the day before. Soon we reached Vernal Falls, and masses of people from all walks of life, most out-fitted with “selfie sticks”.  They looked at us oddly.  Did we really look and/or smell that bad.  We took a “bath” the day before I wanted to say.

The crowds became so thick we literally had to weave our way through the throngs of people who were slowly making the .5 mile, fairly steep, yet paved “climb” to Vernal Falls.  Paul and I, to the utter amazement of some people, actually trotted (just short of running) down the trail all the way to the valley floor.  We found it much easier on our knees, as opposed to the jarring thud of step by step.  Once we all made it to the Valley floor, our first stop was BEER, (and pizza), and to figure out if there was indeed a 5pm YART bus running from Yosemite Village to Tuolumne Meadows.  The resounding answer was probably NO, or at least as far as the Ranger at the Wilderness Permit office could figure.  Even HE couldn’t get a concrete answer.  No worries.  We’d find a way back, but again, first BEER…and pizza.

Sandy and I rustled up some “home town brew” at the Yosemite Valley Store, while the boys secured pizza.  Who’d a thunk that they would have Left Coast Beer, specifically Una Mas.

Another memorable trip in the books.  So glad to share it with our friends.  Hope they will join us again, on another adventure.  In the meantime we are preparing for yet another trip, as it is time to restock our freezer with venison.  Considering we did not get drawn for our usual spot in southern Utah, Wyoming here we come!  Stay tuned for those adventures as things assuredly will not go as planned.