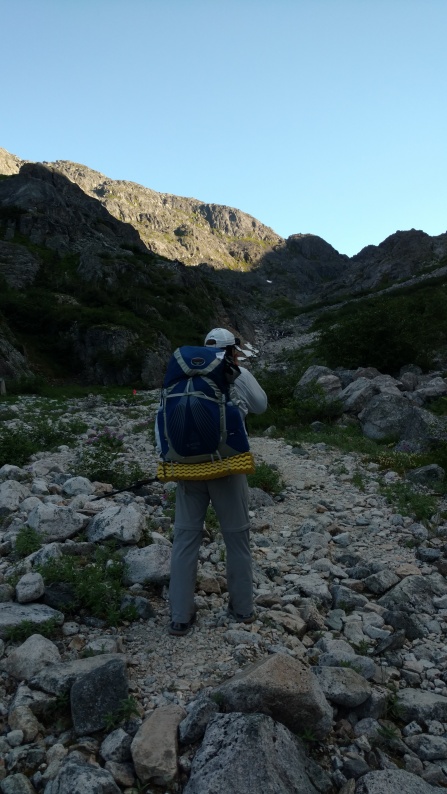 Today was our ascent up and over Chilkoot Pass from Sheep Camp. We were advised by the NPS Ranger Kai that we should have an early start, as it has been known to take up to 12 hours to make it up the pass, and as far as Happy Camp…of which after today’s jaunt, is aptly named. The distance is actually 7.7 miles from Sheep Camp to Happy Camp, 3.5 miles of it is an ascent of 2800 feet. The first mile (the “long mile”) is a gradual ascent, where there is rarely a portion that is NOT going uphill.

Here you climb a narrow trail through vegetation patrolled by hoards of mosquitoes, and a “teenage” black bear with a penchant for mischief.  The entire way, we were continually dogged by biting flies and even more mosquitoes, like that would be even possible, but it was. Coating oneself with bug juice was almost entirely futile, as with the day’s conditions you’re just as likely to sweat it off before it can be of any relief. 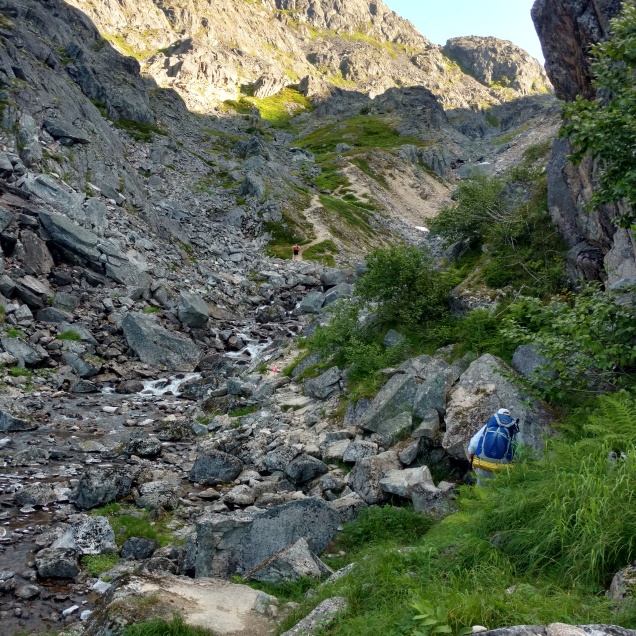 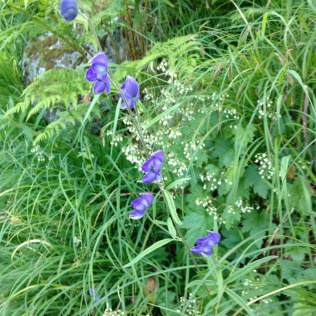 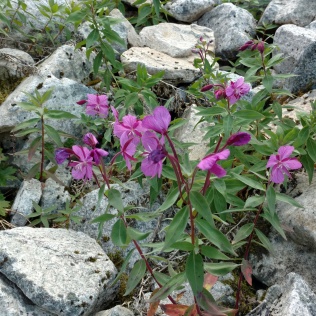 With that said, we actually were extremely lucky. Not often is it clear blue skies over head, let alone NOT raining or fogged in at the top. We had about as perfect conditions as anyone would want to do this trek… in the summer. The usual threat of hypothermia was replaced with the high probability of heat exhaustion and/or heat stroke if one failed to hydrate properly and carry sufficient fluids.

More so than any other part of the trail this far, we came across artifacts littered by the wayside. 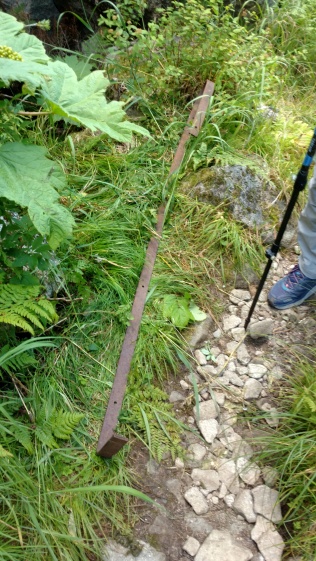 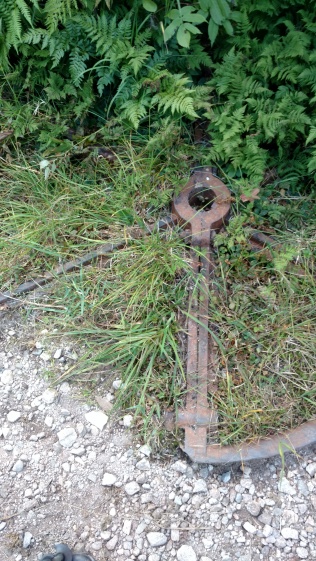 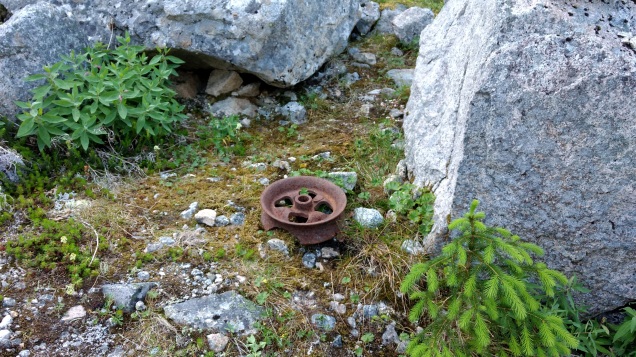 It seemed that at every point we stopped to take a breather (and allow the mosquitoes to catch up to us) we encountered a relic or two. As we neared the “Scales”, more artifacts appeared. 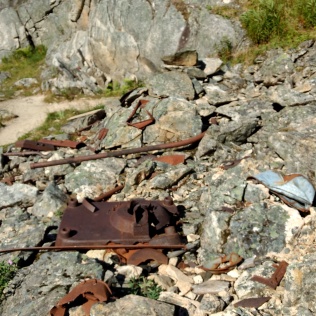 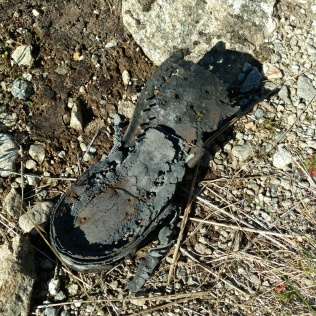 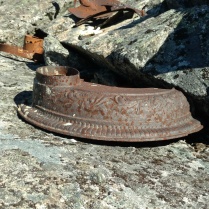 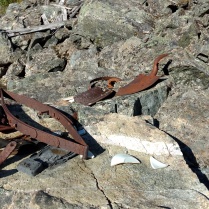 The terrain “flattened” for a brief moment, and the trail looked like low tide at one of the many beaches we’ve been to. 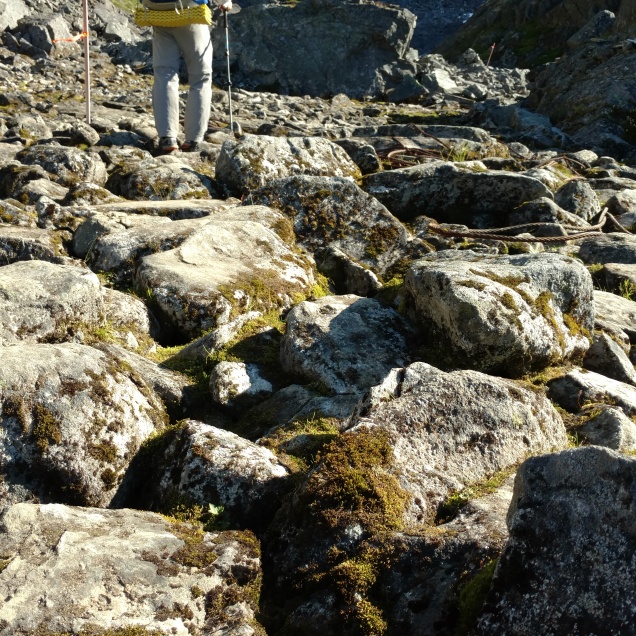 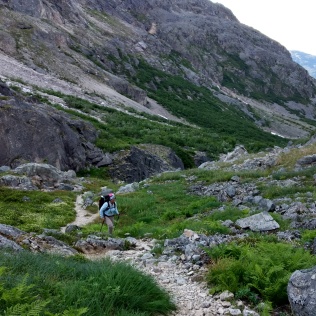 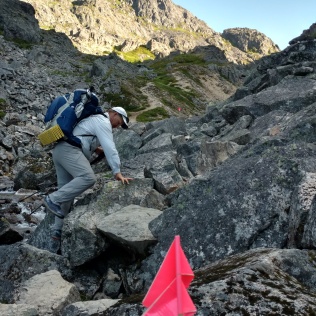 The trail, or rather route soon becomes a 4wd operation, requiring one to stow their trekking poles and don gloves for better hand holds as you literally crawl over jagged granite boulders to the top of not one, but THREE false summits (Ranger Kai lied, or at least only told us about the American side). 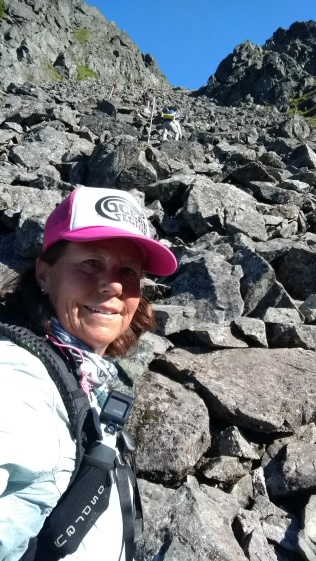 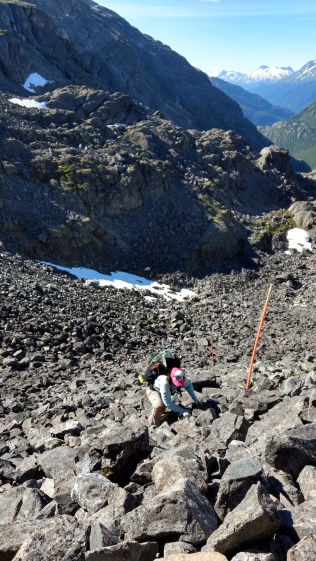 As we continued to crawl/climb, what we did not know was what it was going to be like on the “other side” of the Pass. While the Ranger gave us a briefing, he, and all of the blogs and videos we perused, never truly prepared us for what we would find on the “other side”. Everyone writes about how “happy” they are and how “beautiful” the scenery and campsites are. It’s akin to when everyone (who has more than one child) encourages you to have that second child, telling you that it’s easier than the first…LIES!  Or, at the very least, they omit specific details…on purpose! They do so, in hopes you will join them in the shared plight of parenting. (Been there. Done that. Got the t-shirt.) So I guess not truly revealing what it’s really going to be like, once you get to the top of the Pass and begin your LONG descent into Canada, is a sneaky way to lure you into charging up the Pass and sharing in the “joy” of hiking the Chilkoot Trail… in its entirety. Once you’re up and over, there is no way you’d really want to retrace your steps…if you really didn’t need to, at least during summer conditions. 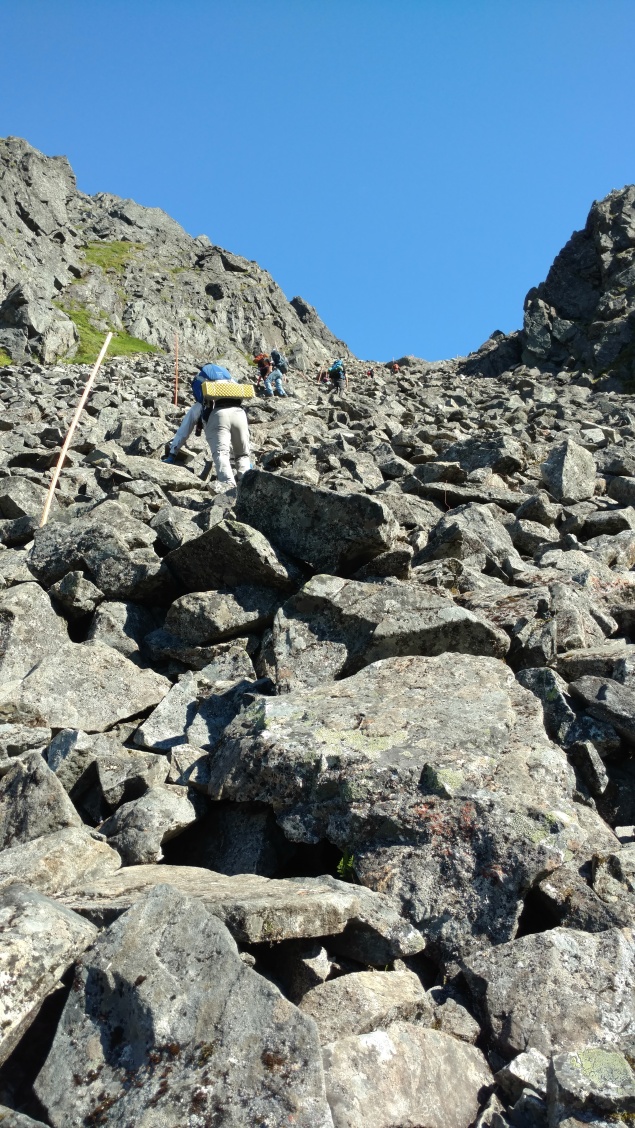 Now, what I didn’t know crawling up the large sharp and shifty granite boulders to the top of the pass, was that Paul had hyper extended his right instep stepping onto one of many angular boulders.  Each step for him was unavoidably painful. 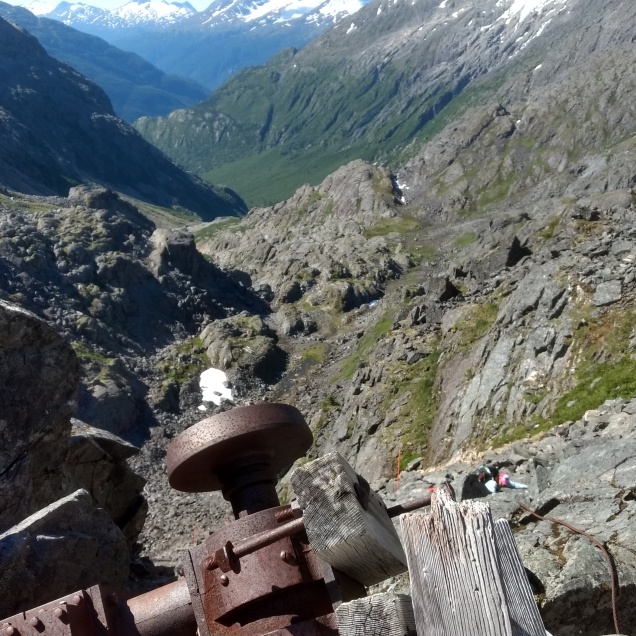 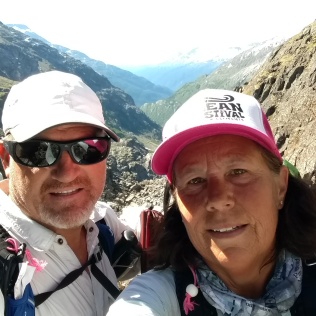 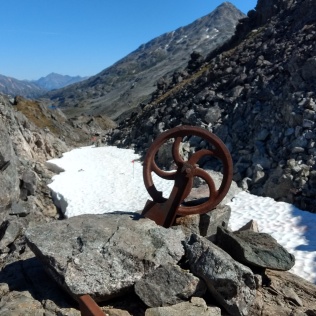 When reach the first false summit, we are relieved to have a break (however slight) from climbing and take time to admire the view.  I go to switch out the SD card in my GoPro and discover the additional card never made it into my pack (in fact I still can’t find the damn thing)  Eager to get this over with, we continue to climb, expecting to see the Warden’s cabin and be in Canada by now, only to crest the next summit and discover it is false as well. 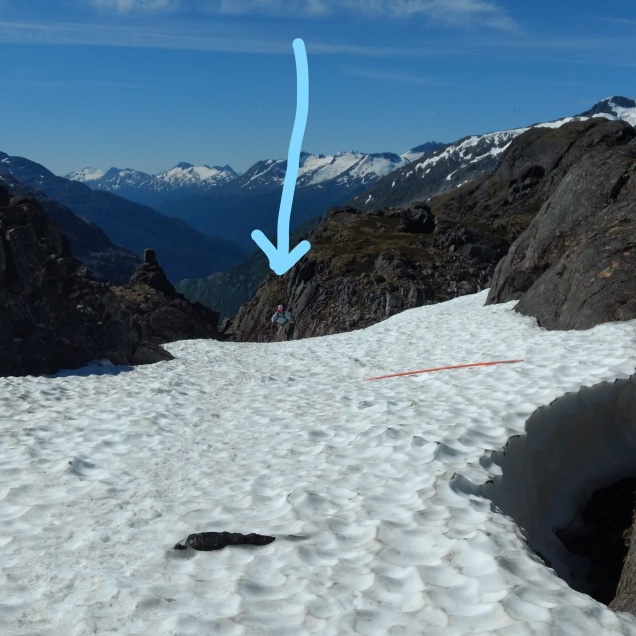 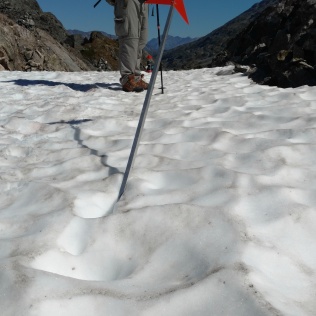 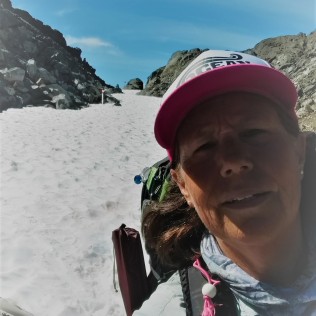 Up and over another false summit and more than a few permanent snow patches, finally we have made it to Canada. However, by the time we reached the Warden’s cabin, Paul’s foot was really bothering him. Now this is significant, because I’m usually the one who injures themselves during one of our adventures. 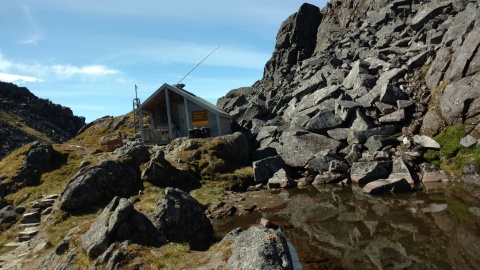 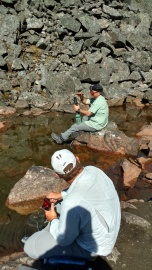 A dose of Advil for Paul and dose of electrolytes for me, a meager lunch, and another two liters of filtered water from a snowmelt pond by the Warden’s cabin…and a potty break, we heft our packs and begin our descent. 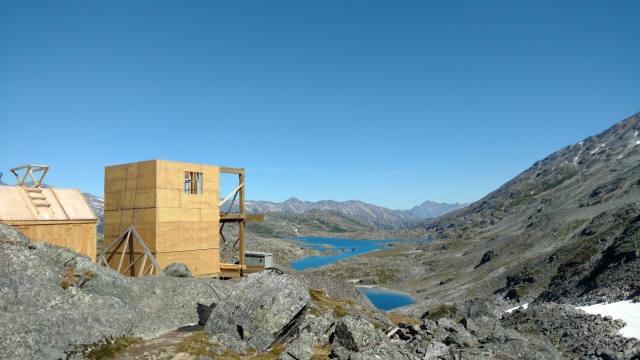