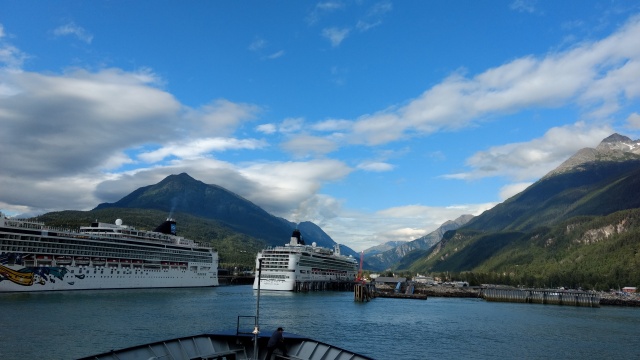 As luck would have it, two cruise ships beat us into port. Apparently there was a murder on board. (It appears there are other ways to die on a cruise ship besides catching an illness) Seems that a husband killed his wife in their cabin…beat her to death. He was trying to dump her overboard as the ship docked, probably thinking there would be too many distractions for anyone to notice him chucking a woman into the water from a giant cruise ship. Obviously he thought wrong. When they asked him why he did it, he said that his wife had “laughed” at him… apparently for the LAST Time! And we thought hiking in bear country was dangerous. Paul remarked, “If that was a good reason for murder, I’d already been dead a long time ago.” Ain’t that the truth!, I replied.

Seeing as we couldn’t set off on the trail till we got our permits (the office was closed by the time we disembarked), we had to find a place to stay. Our fallback plan was to stay at the Morning Wood Hotel. How can you not stay at a place in Skagway called the Morning Wood? As hotels go, they are locally owned, is relatively new, and the cheapest in town at $90-160, depending on the room you select. Alas, we found an even better deal. The Pullen Creek RV park (named after Mrs. Harriet Pullen who used to drive a horse cart over the White Horse Pass and bake apple pie for the miners…she made a crap load of money) would squeeze us in for $25. (Can’t pass on that kind of savings) Who needs a bed, we had one last night. Feeling pretty proud of our score, we waddled with Schluffle in tow to the RV park, an easy 10 min walk. Besides the price, the best part of the score was that they would store Schluffle for us till we returned from our hike of the Chilkoot Trail…in a locked shed with the lawnmowers. After setting up camp, we wandered into town, to get our bearings for the morning, purchase a can of fuel for our JetBoil, and sample the town’s adult beverages. First stop was the Happy Endings Bar. It’s owned and operated by the same people who own the Morning Wood Hotel. Gotta love their sense of humor. Whilst sipping a glass of Alaskan Amber and a Moose Drool we we’re entertained by Skagway’s Wednesday night Cornhole tournament in the bar’s “backyard”. Unfortunately we were too late to sign up, which was good as the competitors we’re highly focused and obviously taking this more seriously than we ever would.

Better to observe the locals than be thumped by them. Having had our fill of Cornhole we wandered some more and found the office we are to report to in the morning…and by sheer luck, the Skagway Brewing Company. This place was hoping. We spied two empty stools at the bar and saddled up. This place had a Gold Rush era feel to it, (minus stinky miners and hooligans). It was not spralling, but compact and cozy. A sign above the bar said, “No Wifi…talk to each other!”

Spying the posted selection of “house brewed” beers scrawled on a large chalkboard, Paul chose to the Chilkoot Trail IPA, while I tried the Downtown Brown Ale. Both were delicious.

The bartender asked if we wanted any food…we pointed to our glasses, and he nodded in understanding. (Watching the food pass by, we decided that we will definitely hit this place again on the return from our hike). Next stop was the IGA (local grocery store), for our trail chips (no salt and vinegar or chilli cheese Fritos, so we had to try something new). Once back at our campsite we charged our electronics and did the final check of email, as tomorrow will find us with little if any service once we start.