So mini-adventure #1 is in the books, thanks to my daughter’s Spring Break plans, and well, just plain old perfect timing.  Yesterday was quite the treat as we got to see and experience some amazing sights.

Today we explored the Antelope Valley State Park Poppy Reserve.  I had been there several times while working for California State Parks, but NEVER when the poppies were even remotely visible or blooming.  As a result, I thought the purchase, and staffing of the park was a waste of tax payers money, for each time I was there, it was barren, brown and ridiculously windy.  I am glad to finally state with absolute certainty…I was WRONG! 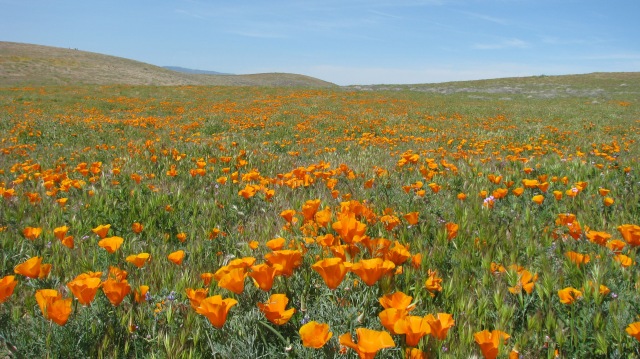 This place is a definite treasure, if not for it’s preservation as an extraordinary natural resource, but for it’s design and accessibility that allows visitors to take a relatively easy walk amongst our state’s flower, the golden poppy (Eschscholzia californica).

The trails are well kept and afford visitors numerous extraordinary photographic opportunities of the Mojave Desert Grassland Habitat, for all walks of life and abilities.  For the most part, most of the visitors stayed on the well maintained park approved and mapped, trails.  Of course there were those “Special Needs” visitors who considered themselves “special” and they didn’t “need” to stay on the trail, but opted to trample the delicate poppies in order to get that one of a kind “selfie”, or family photo.  In my day, we called that kind of behavior, “Job Security”!  Knowing that the area gets pretty hot and is prone to high winds in the afternoon, we arrived (after nearly 3 hours of unavoidable “morning commute” traffic through LA ) just after 9AM.  Our daughter, who lives in the LA area, arrived well before us and had already snapped nearly 300 pictures!  Anyhoo, this turned out to be perfect timing as the air was still “cool” (65 degrees) and visitation was just beginning to pick up.  When we left the park around noon, to do some off-road exploring (see Side Note**), it was significantly warmer, and this was the line into the park! 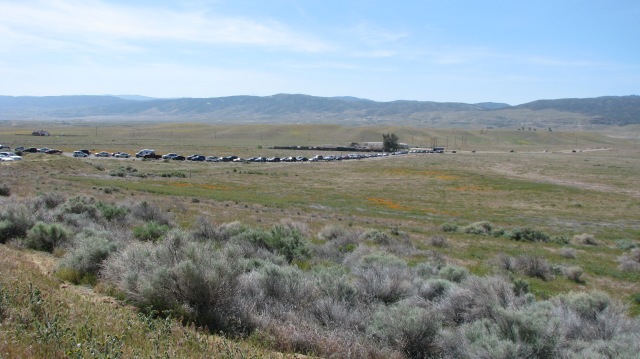 The park boasts of 8 miles of trail, and our daughter had done the Antelope Butte loop trail, so we decided to do the Poppy Trail North Loop (a 2 mile loop…go figure), which also seemed to be the trail less traveled…at the time.  Now it’s important to note that on our drive out to the reserve, we passed many swaths of poppies in full bloom, but nothing compared to an impressionist’s palate of bright yellow Desert Daisies, glowing Gold Fields, periwinkle blue Lupine, intricate Owl’s clover, uniquely structured Fiddle neck and spatters of Blue Dick (I know, right?) to name a few, but mostly the neon orange of California’s State flower (Eschscholzia californica). 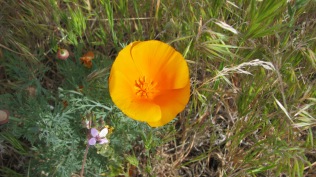 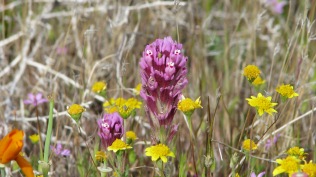 Truly a feast for the eyes and a bucket list must…especially during a “Super Bloom”!

Side Note** If you want to be more adventurous, have a vehicle capable of going “off-road”, and don’t want to pay the $10/vehicle entrance fee (even though it helps maintain the reserve’s trails, park road and restrooms), you can drive past the park entrance (westbound) on Lancaster Rd to 160 W Rd (go straight onto the dirt road instead of following Lancaster Rd on a 90 degree left turn).  Be sure to stay to the right and between the barbed-wire fence line so as not to trespass onto private property.  From here you will traverse 160 W for about a half mile till you come to a right turn, which is W AveF-8 road (also a dirt road). 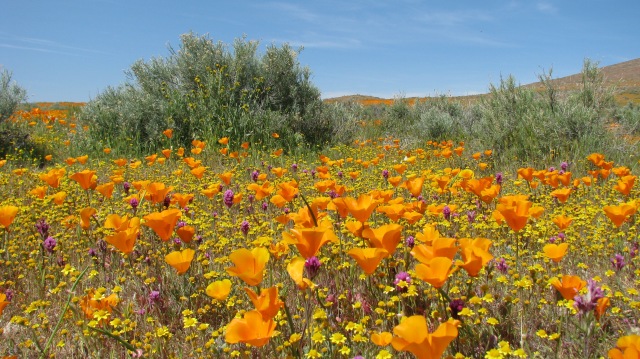 From here you will be treated to a rich flowing sea of color, that pictures can not aptly capture nor words dutifully describe.  Continue as you see fit.  Make sure you have sufficient fuel (for you and your vehicle), as well as water.  We had some cell service with Verizon, but don’t count on it to bail you out if you get yourself into trouble.  Stay on the hard pack and go slow as there are some soft pockets and significant dips in the road.

Looking from inside the park boundary, the dirt roads off W AveF-8, via 160 W, invite for further adventure, and allow you to explore to your heart’s content

We found this road similar to an abyss that draws you in deeper and deeper, enticing you continue on, to see if there is something even more spectacular around the next bend or over the next rolling hill.  Be mindful of rattlesnakes if you veer off the beaten path and be sure to practice Leave No Trace (LNT) principles, and to NOT create new tracks with your vehicle.

The California poppy can also be viewed in great numbers as well, not too far from the Antelope Valley Reserve, on the Gorman Hills just off the I-5 freeway in the area commonly known as the “Grapevine”, and in super bloom years closer to my abode in Southern California (proper) at Walker Canyon near Lake Elsinore just off the I-15 (Walker Canyon Rd and Lake St.).  I caught a glimpse of this super bloom en route to ref several water polo games in Riverside one fine Saturday morning in mid-March.  Alas, no time to enjoy, or ability to snap a picture, whilst driving. Lucky for you there are many YouTube videos that have captured what I was not able to explore myself.  Below is a link to get you started.

I dare say however, that the Antelope Valley California Poppy Reserve is a much less strenuous trek to view, up close and personal, the poppies and their corresponding colossal cornucopia of color .

Fun Facts: (courtesy of the Internet)

I expect the bloom’s life to extend for several more weeks (thanks to another bout of rain this weekend), in varying degrees of color.  But don’t wait too long, or people will tell you…”Ya should have been here yesterday!”