Most of us were asleep before the sun finally set, and sounds of snoring and an increasing wind were the night’s lullaby.  I got up once to pee in the middle of the night, and ended up star gazing till the night’s chill chased me back into the warmth and comfort of our tent.  I awoke just before the sun began peaking over the mountains across the valley below.  All was quiet.  A gentle wind rustled against the rain-fly of our tent.  I peaked my head out to the scene of brilliant oranges and rich red hues.  A silhouette sat upright on the edge of a pancaked boulder.  I snugged my woolen hat and grabbed my phone in hopes of capturing the brilliant spectacle of light that was morning in the mountains.  I shuffled over to the silhouette, it was Jan.   We remarked how ironic it was that it wasn’t until our last day that we awoke to see the sun rise.  Maybe the other days were not as spectacular and our bodies just knew it, and remanded us to sleep.

As we watched the sun ease its way into the morning, others began to emerge from their tents and gaze in quiet awe.  I returned to our tent to rouse Paul, as this was a sunrise that should not to be missed.  Somehow it is always better to share a moment of beauty than to keep it to ones self. 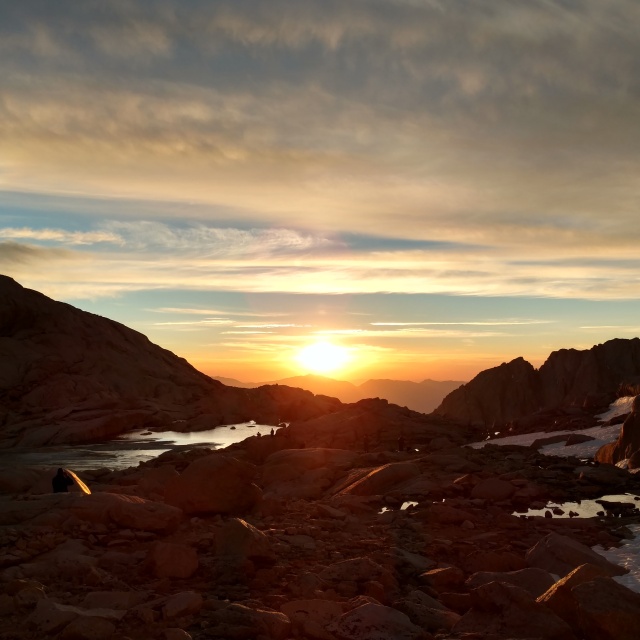 The three of us basked in the peaceful brilliance until daylight had fully awakened.  Soon more heads began to emerge from tents scattered in-between this boulder strewn landscape.  We would be headed down, while other’s adventures were just beginning.  As we sipped our coffees and ate what little breakfasts we had left, we watched as pods of would be summiteers, some boldly and others tentatively, shuffled across the snow field to setup for their 1800 ft climb of the snow chute.  It still being early in morning, the sun had not yet reached the face of the chute, and as such it’s face would be stiff and icy.  A miss step would bring certain regression to ones starting place, if one were not careful.  Some stood at the apex of snow and what should have been the beginning of the 99 switchbacks, bewildered and uneasy.  Others searched unsuccessfully for even faint traces of the switchbacks hoping beyond hope that they could avoid the arduous climb up the steep wall of icy snow. 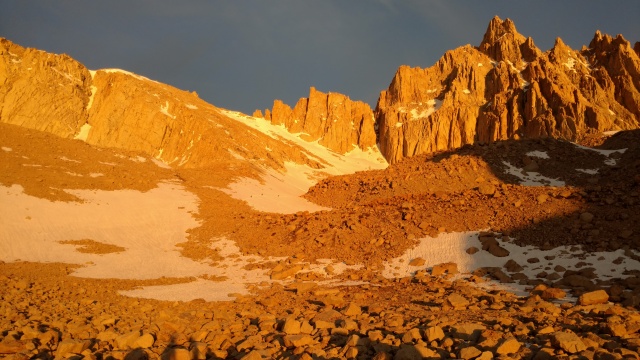 We surveyed the route and pointed, using Scout’s binoculars to zoom in on the triumphant climbers who would only have another 2 miles to climb before reaching their goal, and the sullen who had met their match and were returning to camp…resolving to give it another try when conditions are not so “challenging”.  One would think that it being our last morning, wherein we would be heading back to “civilization” for un-rehydrated food, a hot shower and clean odoriferous free clothing, that we would be sufficiently motivated to rise early and pack swiftly.  This was not the case, as with all other mornings spent on this adventure.  No sense of hurry or urgency was detected or employed.  The plan the night before was to try and head out no later than 0730.  As with each day’s goal(s), we were “close enough” without “encouragement”.  Scout as always, sat “ready” at the appointed time and patiently watched as the rest of our crew finished one thing or another.  Soon everyone was packed and “ready” to go.  Scout made his usual “announcement “, “Who’s NOT ready?”, which when you think about it is a perfect thing to ask.  Not a sound, which meant everyone was “ready”.  Trevor then started to laugh, and asked Scout “Are you sure you’re ready?”, holding up a wayward sock belonging to Scout.  Oops!  Scout hurriedly grabbed the sock, took off his pack and stuffed it in a side pocket.  “Okay, who’s NOT ready now?”  Scout asks once more.  “Umm, that would still be you”, Trevor replied holding up another item belonging to Scout.  What was quiet chuckling now erupted into bent over, pant pissing, laughter.  It was a perfect way to begin the end of this adventure. 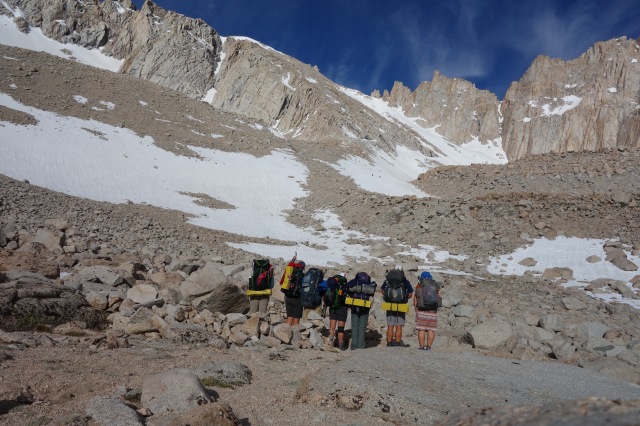 A final farewell to the mountain we conquered, and then down we march, single file, toward Whitney Portal.

It’s only 7.6 miles, and downhill all the way, surely we will be to Whitney Portal by 11am we think, and to the Alabama Hills Cafe by noon.  Ha Ha Ha, silly hikers.  As with this entire trip, nothing is at it seems. 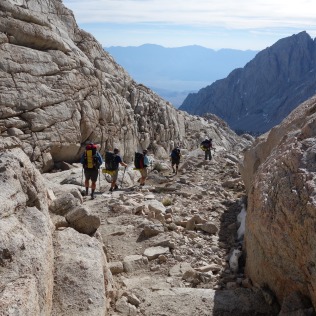 The first 3 miles requires attention to ones footing as we traverse over snow and step down and across uneven boulders, all while doing our best to avoid foot soakers in the water pooled and running through a good portion of the trail.  As we approach the tree-line we are treated to one last opportunity to glissade a mere 40 feet.

It is like the “big kid” slide at the park…only steeper.  All but Jody accept the challenge and seize one more opportunity to “play”in the snow.  Jody has had enough sliding and snow, and walks around it.  As we make our way down the trail to the Portal, more and more often, heavily laden hikers and would be summiteers trudge up the trail.  Some with obvious excitement on their faces, others breathing hard and filled with reflection (…and I’m doing this because?…).  Some stop us and ask about trail conditions, and the switchbacks.  We tell them, that the switchbacks are non-existent, and that to summit Mt. Whitney they’ll first have to climb 1800 ft up a snow chute.  Some are prepared, others we are sure will just end up camping at Trail Camp.  We now understand when they say that 2/3 of all people who attempt to climb Mt. Whitney never make it.  So many factors go into that figure.  Trail conditions.  Time of year.  Altitude issues.  Fitness.  Weather.  Skill level.  No wonder people seek to climb this mountain, and do so a multiple of times.  It is a new and different challenge each time.   Most of our group are all in agreement, that this was a ‘One and Done’ venture…for now.  Soon we see patches of asphalt, which means we are almost in spitting distance of the Portal.  It feels like it takes forever to get there.  More and more people clutter the trail as we close in on our end point.  When we reach the trail head at Whitney Portal, a big sigh comes over the group, and then a mad dash to the Forest Service pit toilets and the water faucet ensues.

Once “business” is taken care of we quickly take a “team” picture, as we have no time to lose if we are to “Yogi” a ride down into Lone Pine 13 miles below.  It is 1230 in the afternoon, and one or two cars appear to be heading back down.  We waste little time, cajoling a ride for three of us (JAN, Trevor and Scout) into town.  Paul, April, Jody and I have a bit longer to wait.  We are turned down more than once.  I guess picking up stinky strangers with backpacks is just too risky for some.  Eventually we are graciously given a ride by two young men in separate cars who were hoping to drop one of their cars at the Portal to reclaim once they completed their 3 week hike of the John Muir Trail (JMT).  We told them we ran into the same issues, hence our hitching into town.  They figured it would be “good karma” for them to pick us up, as they too will need the kindness of complete “strangers” when they finish.  They drop us at the Hostel in Lone Pine where we shower and wait for Jan, Trevor and Scout who had made a great decision to collect our two remaining cars at Horseshoe Meadow while they waited for us to Yogi a hitch into town.  Our end goal was to dine at the Alabama Hills Cafe before they close at 2pm.  It is 1:50 when they pull to the curb.  We tentatively pull open the door to the cafe.  “I know it’s almost 2 pm, but any chance you can feed some hungry hikers?  We’ll understand if you are about to close and can’t”, Jan pleads in her most upbeat voice.  ‘Come on in’, the waitress beckons.  Faces glowing red and freshly sunburnt, crisp new t-shirts exclaiming we climbed Mt. Whitney, and hair still wet from a quick and glorious rinse we plop ourselves down and drool over the menu.  The portions are hearty, as is our hunger, for “hiker hunger” had just arrived on our pallet’s door.  We all but practically lick our plates clean.  Fully satiated it is time to part ways and head back to each other’s respective “reality” that awaits our return.  This has been a glorious trip.  Who would have thought that such an eclectic group would fare so well on such an adventure.  Might there be another adventure in store for the Magnificent 7?

3 Responses to Bring’n it Home