We awoke to find, pleasantly, that we had not been consumed nor molested by a bear.  Our food was left untouched, and our feet somehow slid into our boots with very little coaxing.  Ah, the wonders of Ibuprofen, time off the feet, and cold water.

We scooted by several tents with its occupants still deep in slumber as evidenced by their audible snoring.  Just past the lake we entered a marshy area thick with mules ear and mosquitoes.  The trail eventually led to another lake where we came upon several other hikers of the PCT thru-hiker persuasion.  We know this because they barely acknowledged us as we passed, as they hovered over their stoves cooking (and/or re-hydrating) their mid-day meal whilst lounging in the dirt under the available shade.  We, on the other hand choose a sunny spot at one end of the lake and break out our lunch.  It is now that we learn why the seasoned PCT thru-hikers are in the shade.  MEAT BEES!  We retreat to the nearby shade of a lone tree and finish our “lunch” which consists of sweaty string cheese, beef jerky and melted trail mix. As it is hot, and the small lake we are “parked” at beckons our entry, we get a wild idea.  What if we inflate our sleep pads and go for a float on the lake?  Genius, we surmise. And into our packs we dig for our air mattresses. The water is wonderfully refreshing. We float out to the middle thinking we are quite inventive, only to discover that to exit the lake we must walk through deep and soft mud that swallows our camp shoes and leaves scratches on our legs from the numerous submerged pongee sticks.  Fairly relaxed and cleaned up, we pack up and continue onto Barker Pass.  It is still very hot and dry, so we load up on water even after having cameled up, not wanting to revisit our lesson from earlier in the week. 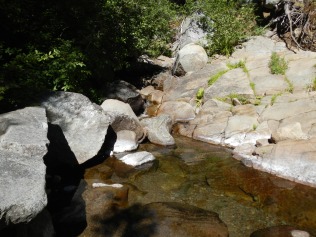 Of course, on our way to Barker Pass, we cross many unmentioned creeks and springs from which we could collect water.  Onward we walk.  Paul walks ahead, as the heat is beginning to get to me and I need to slow my pace.  Two PCT hikers catch up to us, nod “hello” and zoom past us without breaking their awesome stride. 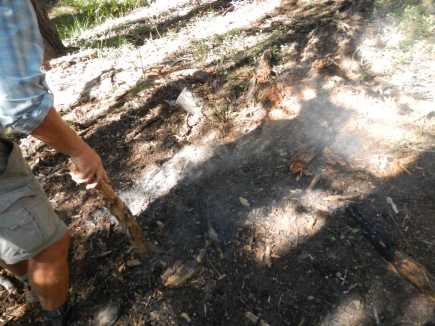 When I catch up to Paul, I find him actively putting out a fire off the side of the trail in a pile of cuttings. (There are many similar piles on both sides of the trail for nearly 1/4 mile.   They are from the Forest Service’s thinning of the trees to improve the health of the forest, and ironically, to reduce available fuel in the event of a wildfire). At first I thought, geez it’s so hot, why in the world would you be setting a fire?  Then it was, who’s the numb-skull that didn’t extinguish their fire fully from the night before?  Paul told me that he had been walking along, looking for a good place to “detour” (off the trail) to do some “paperwork” when he saw an active fire with flames nearly 2 feet high about 10 feet off the trail.  He looked around to see if another hiker was around, and/or if maybe it was a spot of a previous campsite (maybe the fire was the result of a campfire not completely extinguished).  Neither were the case.  Interestingly, I had noticed, just before I had reached Paul, a white truck, on a dirt road some 100 ft below the trial heading rather fast down the road away from the pass.  I figured we were happily nearing the pass.  Now, our “Spidey Senses” were beginning to tingle.  This fire was near a road, in a fairly secluded area with neatly stacked piles of fuel. The air was hot and dry (not a cloud in the sky), and the once still winds were now gusting and beginning to blow with regularity.  We concluded this was highly unusual and sadly all signs pointed to an arson fire, for it was “perfect” wildfire conditions.  As we were finishing putting out the fire, several other hikers passed us without a pause, even though small tendrils of smoke continued to rise from the once red glowing embers and the air distinctly reeked of a forest on fire.(Turns out that when we did the PCT in 2014, we also ended up putting out a growing fire that had been started by a lightning strike)  We considered calling into the Forest Service, but had no idea exactly where we were, and/or how to get a hold of them.  Dialing 911 was out of the question, knowing that the call from our cell phone would first go to the CHP, and frankly the current danger was over.  So, we ambled on. 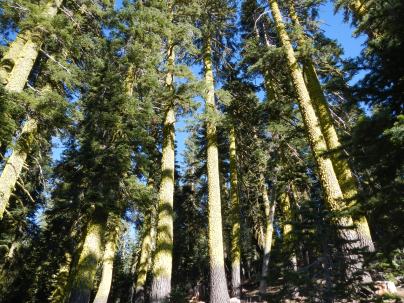 We wind through a grove of pines sporting shaggy lime green “sweaters” just before we make the final climb to the pass.  When we reached the pass, we see two of the hikers that had passed us before Paul had spied the fire, and asked if they had seen the fire.  “There was a fire?” was their response.   We talked for a bit about where they were from and how they were enjoying the PCT as they set up for the evening, having done a 38 mile day…already!  Feeling completely unworthy, we decided to stumble on another 2 miles and find another place to camp before the sun completely set and darkness coated the trail.  This would be our last night spent on the trail.  And frankly we were ready to be done, as we have been on the move for 8 days straight, hiking between 18-21 miles each day, without a break.  It turns out that Zeros (complete days off) or Neros (most of a day off) are necessary.  Figures that we would have to learn the hard way. 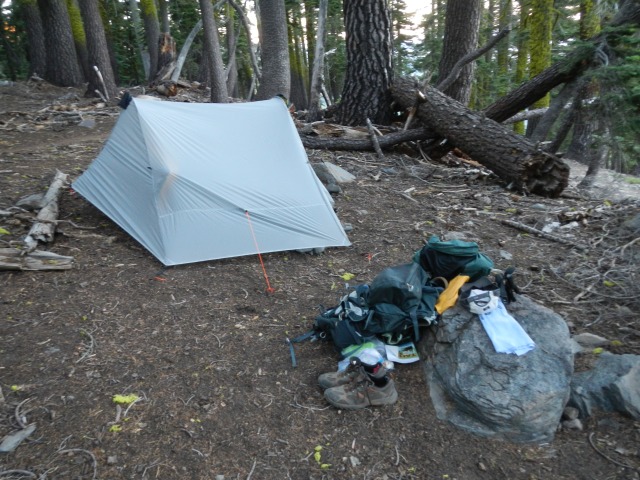 We found a fairly flat place to set up, leaving a “mere” 14 miles to traverse the next day into Tahoe City.  Completely exhausted, we did our best to eat as much of the food we had left so as to not have to carry any “unnecessary” weight into the final stretch.