We (Paul) set the alarm for O-dark-early, as the plan was to outsmart the mosquitoes by packing up and getting on the trail before they woke up.  It worked for awhile, until the trail out of Big Meadow began to climb (I don’t know why we were surprised) enough to make us start breathing hard.  It was as if an alarm went off, and an announcement was made…”Hey, they’re getting away…after them!”  We had about 7-15 seconds to pause and catch our breath before we were swarmed, otherwise, amazingly we were able to out walk them.  We found that they particularly liked Paul, while me they did not find so appealing. Maybe I didn’t smell scrumptious enough for them, or MAYBE it was my ExOfficio  bug proof shirt and Ben’s 30% Deet Bug Spray that I had spritzed myself with in strategic areas (Hat, back of head, top of hands) that kept them veering towards Paul.  When we neared Round Lake, I had to resort to my fashionable mosquito netting, as had Paul earlier. 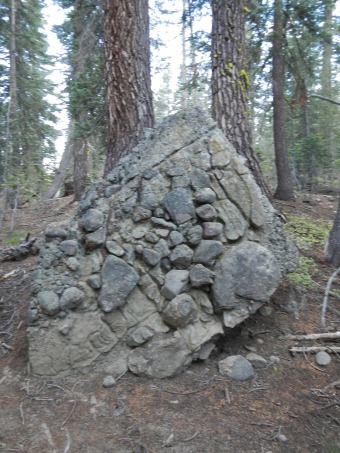 Also near Round Lake were some remarkable rock structures.  One looked strangely familiar as an art installation piece I had seen someplace, of which I can’t remember now. 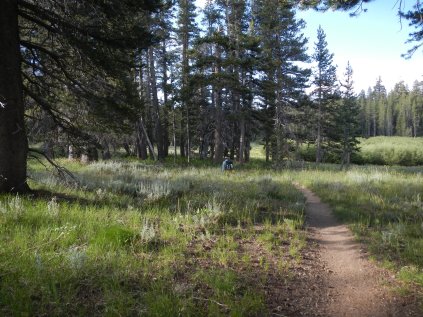 Once we reached where the TRT merged with the PCT (7 miles from Big Meadows), and the sun was warm enough to lull the mosquitoes back to “sleep”, we broke for breakfast.  A hearty packet of oatmeal and a cup of “Joe”.  We had planned our next stop for Showers Lake.  Apparently somewhere along the way we unceremoniously passed it and thought nothing of it because from the trail, the lake was on our left, while the map showed it to be on our right. 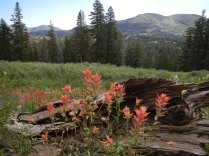 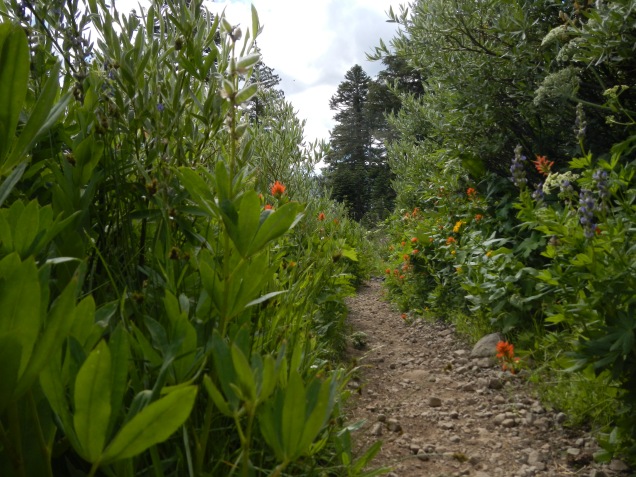 It was not until we had climbed and waded through waist high lilac when we met another hiker, headed to Mt. Whitney, that we discovered we had passed Showers Lake. GREAT!  With that we plopped ourselves on the trail and took a much needed break, and worked on figuring out where we were, and how far had we gone.  Luckily water was abundant on the trail so missing Showers Lake to camel up was not an issue.  It turned out that we were making better tracks and time than we had thought.  Hunger is a great motivator.  Ah, but this was not to last.  We reached an impasse with a trail marker that read “Hwy 50…4 miles”, “Echo Summit…4 miles”.  Hmmm, both of equal mileage.  They’re essentially the same right? (Little did we know how different those 4 miles could/would be). Which path do we choose?  We thought about it for a bit.  Got out the maps.  Turned on my phone and Halfmile’s PCT trail maps and confirmed that the 4 mile Echo Summit route was the “correct” route…WRONG!  While it was the PCT/TRT, it was 4 miles of the most grueling and exhausting trail we had ever experienced…so far (even more strenuous than the 10,000 ft ascent of Relay Peak).

The good thing, we thought though, was that when we do the PCT next year, we will not have to do this section…ah been there, done that was the thinking.  The formulated plan will be to make the turn to Big Meadows and have someone pick us up for a Zero Day and then start back up at Tahoe City.(We in fact did NOT do this when we hiked the PCT in 2014.  We did however stop and eat at the same place for breakfast).  The pay-off for the grueling miles was Vern and Patrice’s trail magic for us.  For when they met us at the Echo Summit parking lot (next to the ski area), we were met with a BIG JUICY cheese burger (the size of a hubcap), tons of fries, a full salad and a gallon of ice cold Pepsi.  We all but inhaled the mound of food before us, with nary a word spoken besides a cacophony of happy humming.  Midway through our engorgement, we heard Vern chuckling and realized besides the initial thank you’s, we had not said a word.  Patrice then remarked that she was surprised we hadn’t lost any fingers yet.  It was here we paused and told them about our miscalculations during this section .  Once fully satiated,and frankly surprised our pants didn’t burst at the seams, we completed our final re-supply

(after double checking our numbers and adding just a bit more…for good measure), packed up, and Vern and Patrice drove us to Echo Lake as our feet had had enough.  Before they started driving, they made sure we had our windows down, as apparently we smelled something fierce.  We were hoping to catch the water taxi and avoid walking the 3.2 miles of shoreline, but we got there too late.
As it was now 6pm, the store was closed as well…so no ice cream.  That will have to wait till Tahoe City. 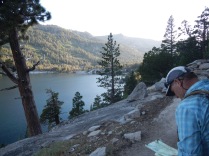 We bid our farewells, and off we walked.  The trail underfoot was sharp and rocky.  Little did we know that this wouldn’t change much until the other side of Dick’s Pass.  As we walked, we noticed signs posted that it is illegal to camp on the PCT/TRT before you get to the Desolation Wilderness boundary, and even then you need a permit (of which we did).  You are supposed to camp your first night in your designated “zone” – the one we reserved (read… arbitrarily picked, as we really had no idea how far we were going to get and where exactly we would camp once we got into Desolation Wilderness) when we got our permit the week prior.  Not only did we NOT make it to our “zone”, we didn’t even make it to the border of the Desolation Wilderness before we called it a night and picked what turned out to be the last “flat” spot along the rocky trail.

We camped down where Paul is at, with Upper Echo Lake on the horizon

Awesome!  As we set up, we laughed it would be just our luck to get caught.  Headline reads…”Retired Rangers cited for illegal camping on the PCT/TRT”.  It was worth it though!