1.  Maps and or guide books are mere “suggestions”

2.  What looks “smooth” and “flat” from a distance usually is NOT.

3.  Don’t count on, or pass up an opportunity to get water.
We awoke to discover that we had NOT slipped down the hillside, and that our food had remained largely untouched.  Several early morning runners ran by as we broke camp.  The terrain for this section differed dramatically from the previous section.  Views along this path were spectacular and the vegetation was amazing. 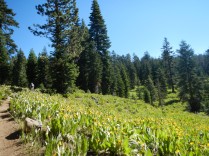 We started in a densely forested area with a rich peaty smell whose trail was soft and dusty.  It morphed into one littered with scree and low growing vegetation, and then onto a powdery tread of finely ground granite, accented with unique rock formations in a sea of mule’s ear wriggling in the stiffly blowing wind, ending in a crechendoe of gradual downhill upon sharp marbles. 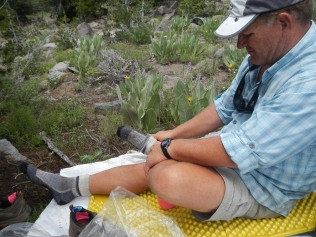 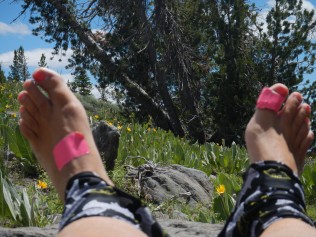 Our feet would require some TLC.

Most of the trial was uphill, as we expected, seeing there was to be a 3300ft elevation gain.  We noticed that most hikers were heading in the opposite direction (counter clockwise around the lake), could it be because it was mostly downhill for them?  From the beginning we had decided to travel clockwise around the lake in order to save the Desolation Wilderness for “last””.  We wondered however, if we had chosen the wrong direction.  Could we be making this harder than it needs to be?  This would not be the first time…or apparently, the last.

Paul and I had made an extra effort before we set off, and at each “break” to study the map and read the trail descriptions believing that we would have more success in estimating our distance traveled, and more importantly, how much farther we needed to go.  As with the day before, our ability to judge distance traveled was somewhat “off”, as was the signage.  The mileage posted at intervals along the trail, we figured had to be in nautical miles. 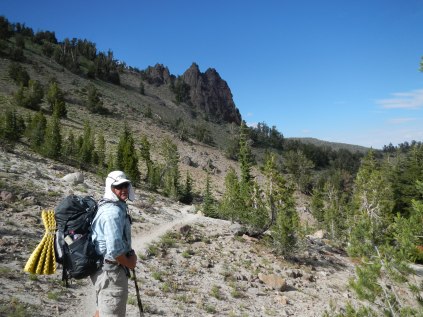 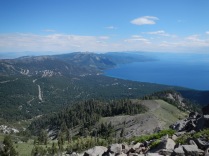 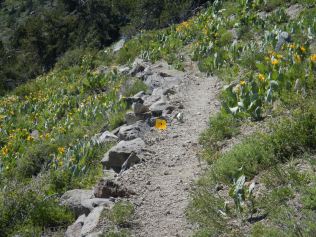 Nevertheless, the trail had so many dramatic views, the accounting of “mileage” became less and less important, with the exception of the next watering hole.  As we started fully hydrated and stocked with water, our plan was to water up at Gray Lake.  We scraped that plan when we finally got to the alternate path to the lake.

The path, one-way, was 1.3 miles.  In total, this was 2.6 miles too much, considering how far we had already covered, and the fact that we didn’t have much farther to go for the day…so we thought, we marched on.  Luckily, “2miles” earlier I had spied several 10 gallon jugs of water off the side of the trail.  We considered this “trail magic” and filled up 2 liters worth, “just in case” Gray Lake did not work out for us.  This would turn out to be our saving grace. 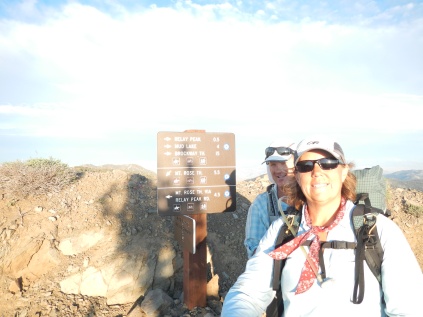 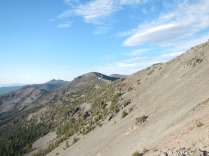 When we finally got to Relay Peak (10,335 ft), which is the highest point on the TRT, we were dog tired and had 1 liter of water between us.  We looked for a place to set up camp, but we could not find a suitable place to pitch our tarp tent in the rocky conditions, and it was getting late.  We knew there was water “2 miles” away at Galean Falls, in fact we could several small ponds down below us.  Thusly, we began our descent mistakenly thinking that the service road upon with the trail follows was in good condition and FLAT!  What things look like from 1000 ft above is not necessarily the case at “eye-level”.  By now our feet were screaming as they were swollen and blistered in a few strategic places (We were in the process of learning, the “hard way”, that just a half size larger than we had already gone, would have been a much better idea).   We decided that the first “flat-ish” place we came upon we would set up camp, as every moment off our feet, was a moment we were quickly learning to savor. We spied a spot, that was mostly “flat”, but once again were challenged by the elements.  Setting our tent up in the backyard had been easy-peasy, in the great outdoors the degree of difficulty, and need for creativity had increased.  No sooner than we had set up our tarp-tent, the wind began to blow, and not necessarily in a direction that the tent could best withstand.  Undaunted, and at odds with Mother Nature, we hunkered down and forced our tent to remain standing by placing HEAVY rocks (more like boulders) atop each tent stake.  SUCCESS!  We used a 1/2 liter of water to rehydrate our dinner and went to bed.  This time we slipped down to the bottom of our tent, and wondered if we would awake with a tree upon us in this crazy wind.