(This is the last “mini adventure” post of our trip to Oba Lake. Seeing as we are less than 2 months out for leaving for Spain and our trek of The Camino, I will switch to Camino mode, our prep, gear, travel and logistics challenges and remedies…and now we return to our previously scheduled post)

Up early this time with a quick bite to eat.  This is it.  The last day to pull in something good, and today I have decided to increase the degree of difficulty and fish exclusively with my (only intact) fly rod whose reel is set up with a sinking line.  I figure that mostly I will catch pike, but I don’t care.  I also figure however, that if I catch a decent size walleye approaching the size of Mark’s on a fly set up, I’m sure to dethrone him, or at least get honorable mention.  I set up with a greenish minnow that resembles the lead head we have been landing walleye with and try my luck.  Two old codgers from another camp motor by and see my set up.  “Fly rod, eh?”  Yup.  I thought I’d make it sporting for the fish today, I tell them.  They laugh and say, “Can’t wait to see you with a pike on the line.  That’ll be a good fight.”  Looking forward to it, is my reply.  I get a few hits, but nothing “sticks”.  Paul on the other hand is reeling them in like gangbusters (whatever that really means).  I change it up to a silver minnow fly in a last ditch effort, and WHAM, Fish On!  Ha! They told me at Bass Pro when I went in to pick up some flies and additional leader that I would be hard pressed to catch walleye on the fly.  Take that boys!  I land a combo of walleye and pike, but nothing worthy of mention, until…

Drifting past Buzz Island I get a hit.  A hard hit.  It runs with my line.  Do I have bottom?  Don’t think so.  Bottom doesn’t change directions or pull back.  My rod now resembles a thin horseshoe.  I strip my line and pull him in bit by bit.  He runs with it again.  He’s fighting like a pike, maybe a big enough pike to win with.  The fish is now near the surface.  It is NOT a pike.  It’s a walleye, and a HOG of a walleye!  It spans at least 26 inches based on the  measuring device convienently plastered on the inside of the gunnel the fish has saddled up to on the outside.  Paul has already retreived the net, and exclaims, “Holy shit, It’s a walleye!” and starts to dip the net into the water to capture this hog before he dives again.  In a split second the fish turns sharply and severs the line.  What the F@%#!  How does this happen?  Just a mere TWO more seconds and that fish was ALL MINE, but NO the bastard snapped my 12 lb test line like an uncooked piece of spagetti.  Noooooo.  So close.  We spend the rest of the afternoon trying to lure that bad boy back onto my line to no avail.  I do however, land a 32″ pike that I bring in, just in case. 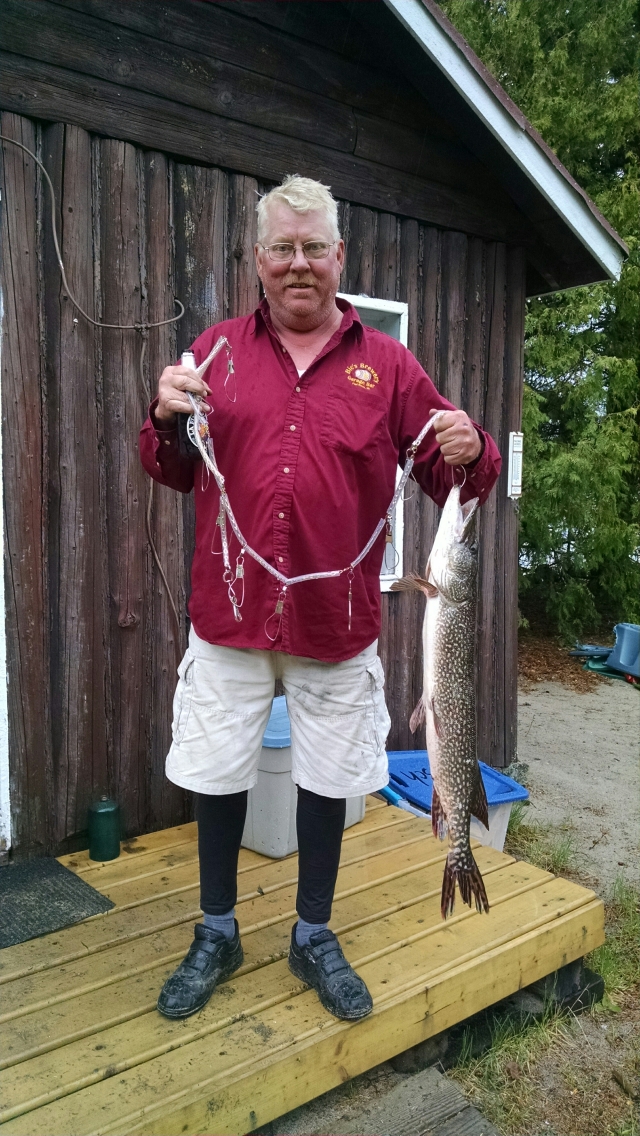 (One of the guys, Gary, had orders from his wife to bring home a big pike and he hadn’t filled that order yet. I give this guy to Gary) On the way in we tried one more spot.  My honey hole.  Maybe, just maybe we’ll get lucky.  We arrive at the honey hole and it starts to drizzle.  We are prepared and determined to fish until we can’t.  We land a few, but nothing resembling the hog I nearly had.  I did however actually land a small perch, a fish I’ve never eaten before, so he came home with us.  By the time we got back to our cabin it was raining cats and dogs.  We were soaked to the bone.  We were greeted by the other anglers who had failed in topping Sparky, and were hoping we had prevailed.  Sorry, we told them, but I got a perch.  “A perch?”  Yup, and showed them my “trophy”. 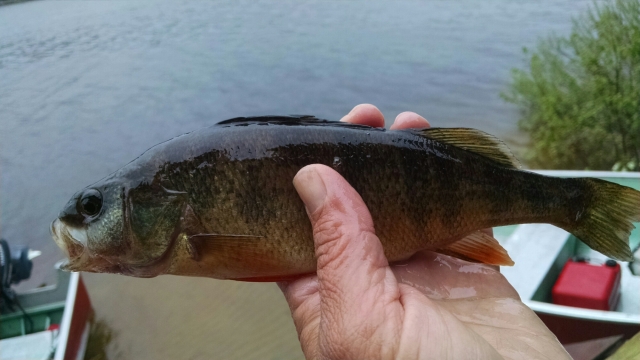 Sparky cooked up a ginormous stack of Saltine cracker encrusted fish, and we finished off our remaining adult beverages and shared our last days’ adventure.  In addtion to consuming a healthy plate of fish, it is “Spa” night. As Paul and I skipped this luxury monday night, we are feeling “gamey” enough to try this thing out. The camp’s host has made a sauna and shower room, complete with “hot” water, but it is only open and available until 10pm. We carefully make our way down a narrow and now muddy path leading away from the cluster of cabins to its end point and discover a crudely constructed wooden building. 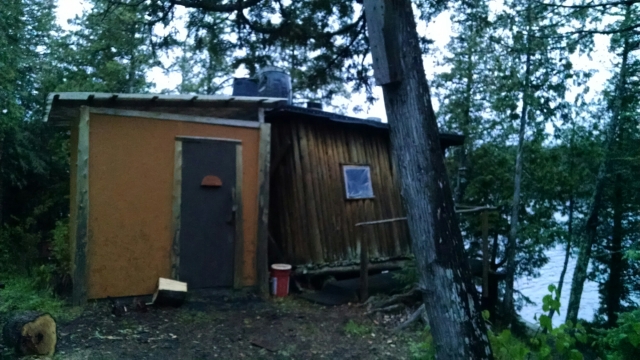 One end toward the lake is the sauna, with a steep ramp complete with a rope “rail” to help you climp back up the ramp to the sauna again.  The other side is a shower room with two enclosed stalls. The place looks a bit rickety and we wonder how they are heating the water. We slide around the back of the structure and discover a unique feat of back country engineering.

We consider opting out, but then think, ‘What the Hell. It’s been a good trip so far.’ The sauna is AWESOME! We have it all to ourselves. (Truth be told; I was dreading the thought of sharing the sauna with 10 farmer tanned, beer bellied, pre-showered fishermen) A large, potbelly, wood-fed stove sits just to the right of the heavy plywood door. Large rocks are piled in a “basket” adjacent to it with green pine bows atop it. A bucket of water with a ladel sits near it. We clamber onto the 12 ft long cedar benches. Paul pours a ladel of water onto the rock/pine bow stack. The rocks hiss loudly and release a thick cloud of steam, that smells like a combination of Christmas and a warm summer’s rain. Absolutely glorious! We bask in the warmth and serenity of the cedar box. For fear of dozing off and waking up like dried prunes, we decide, after a while, to hit the showers. As we entered the shower area, we were reminded of the rudimentary showers we had a Kennedy Meadows on our hike of the PCT last year. These however were a step of above, as in the enclosure was solid. No milk boxes to stand on here, and certainly no worry of the door or shower curtain swinging open with each puff of wind. The shower temperature however, was reminiscent of our showers at Kennedy Meadows in that the water was a little above tepid, but in both cases this was because so many others had gone before us. Not complaining, just remarking that one would think that by now we would know better. We finish cleaning up and tread gingerly back to our cabin. Paul has to hold me by the seat of my pants as I keep losing my footing and almost take a serious fall into the mud now bracketing the single track trail thereby negating any good the shower provided. We pass the common area “Clubhouse” and discover that all the anglers have gathered to reveal this weeks “tournament” Jackpot winner.  We duck into the Clubhouse.  Sparky has accepted his award and the host (Michael), upon being asked, is telling how it is that he came to be owning a fishing camp in the middle of nowhere.

In short:  While of college age, he and his wife escaped communist newly occupied Czechoslovakia and caught a boat (which he thought was going to be like the Queen Mary…it wasn’t) to North America.  He ended up in Canada, went to college and became a Geologist.  While doing land surveys through the Ontario area for useable resources, he and his colleges  came upon Oba lake.  While rich with reasources they collectively decided it was too remote and (more importantly) beautiful to “use”, so they basically wrote ‘nothing to see here…move along’.  They had also come upon a small “fishing camp” and he fell in love with the place.  He would return year after year (he and his family settled in Vancouver) to visit and explore the area.  The owner of the camp would always ask if he wanted to buy it.  ‘No, can’t afford it was the answer’.  Then one day the owner called and said he had to sell the place, and if he ever wanted to buy it, this was the time.  Michael then dropped everything, pulled out all his savings, hitch-hiked across the nation and then because the train was not running the day he arrived, walked the 17 miles on the tracks to the camp and paid the man. Once the transaction was complete, he wallked the 17 miles back to town (Hawks Junction), called his wife and told her that he just bought a fishing camp.  That was nearly 30 years ago.  His son Andre, his wife and their young son spend their summers working at the camp.

What an amazing time we had.  Time to pack and head back to what most people call “civilization”. 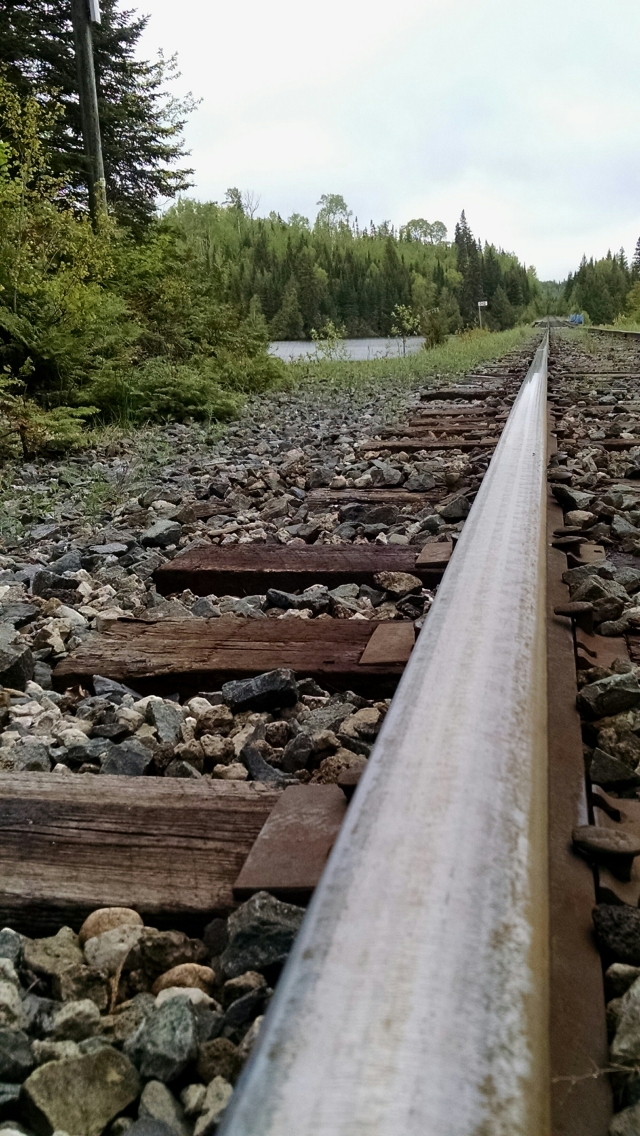 This entry was posted in Mini Adventures and tagged Oba Lake. Bookmark the permalink.