Ready for the bus ride

The one day we can sleep in till at least 9am, we can’t. We are wide awake at 6:30 am with nothing really to do. The restaurant, store and laundry do not open till 0800, and for the most part there is nothing on Canadian TV. In the middle of the night we had switched from one of the two queen beds in our room to the other as we kept finding ourselves rolling toward, and sinking into, the middle of the bed. It was like being on an uneven piece of real estate. We laughed as we had hiked all these miles, we finally finish and get to sleep in a real bed, and its almost more uncomfortable than sleeping on the ground. Luckily the other bed was not as well slept in. We should have known, seeing that the TV was at the end of the “well used” bed…things to remember for the future when traveling and “cowgirl camping”. We get up, make in-room coffee and prep the laundry. We expect that this will be the last time we will have to wear rain gear indoors. We try and add a few more posts to our blog, but the WiFi at the Lodge is actually “WeeFee” (barely works), and our phone has no signal, so we can’t call anyone and tell them we made it. The whole experience is a little anti-climactic. We dump our trash, which includes food wrappers, our sit pads, the 22 oz Schoolhouse beer bottles, water bottles and some super stiff/worn out socks. Our feet are sore and our shoes smell awful. We would have trashed those too, but we figure they may come in handy while in Vancouver. Until then, we will wear our Crocs. We shuffle downstairs to the lobby and registration desk and inquire about the laundry costs. We will need Canadian coins, “loonies and toonies”, What? These are one and two dollar coins. We convert our cash into “funny” money. It’s 7:50 am. As there are only two machines, we want to snag at least one, first thing. Our plan is to put our stuff in the wash then take a dip in their salt water pool and finish with a soak in the jacuzzi and spend some time in the steam room. Paul wants to hit the sauna as well, but I will pass as I’m pretty sure we walked in a sauna on more than one occasion. We would have done this last night but everything shut down by 10 pm. As we stand outside the locked laundry room door, a maintenance person comes by. “You need into the laundry room?” she asks gruffly, as we stand there in our rain gear and Crocs. We nod, affirmatively, and say that it’s not 8 o’clock yet. She looks at her watch and waves her hand dismissively at us saying, “oh, it’s close enough. I’ll open it up for you.” Paul decides to be daring and asks if she’ll open up the pool too. “Sure, why not?” is the response. Good thing we were there early, because no sooner did we load our clothes into the machine, two other hikers appeared with laundry on their minds. Phew. Good timing. The thought of a 4+ hour Greyhound bus ride in stinkyville clothing into the metropolis of Vancouver did not seem appealing for us nor I’m sure for the other passengers, that may or may not be through, thru-hikers. We mark our watches for turn around time. We need to have everything done so we can be on the 1010 bus to Vancouver. Into the pool building we go. We strip down to our last clean pair of Exofficio underwear. First a dip in the pool, then a soak in the jacuzzi. While the jets are strong, the water is not super hot, but it will do, and we do our best to reduce the soreness. On the last downhill to the lodge my left quadricep was doing its best to give up and seize on me (What is it with the left side of my body?) We knew it was going to be a long sedentary ride and we needed to get as much lactic acid worked out as possible. 68 miles in 2.5 days had reaked havoc on our bodies, but it was worth it. By 0930 we had everything done. This gave us time to get a coffee, a danish and something to eat for the bus ride. We also made sure we had some Coke to go with the 3/4 full bottle of Captain Morgans Spiced Rum we had left over from the night before. We had thought we would have drank more of it the night before, but we were just too exhausted. No worries, we’re retired and now officially on “vacation”…would you like anything with your cinnamon bun? just some rum thank you. The bus arrives and we gather with several other hikers who had finished yesterday as well. 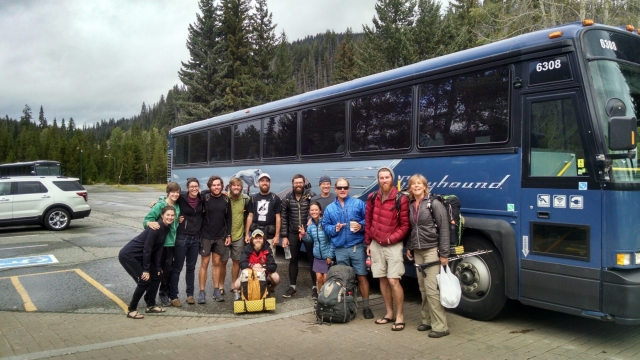 We gather for a “class” photo before boarding the bus. Wow. We really did it. It seems weird not to be walking somewhere. It’s almost a little disconcerting to be separated from our packs as the bus driver barks at us to leave our packs outside by the cargo area. We all tentatively drop our packs as directed and board the bus. 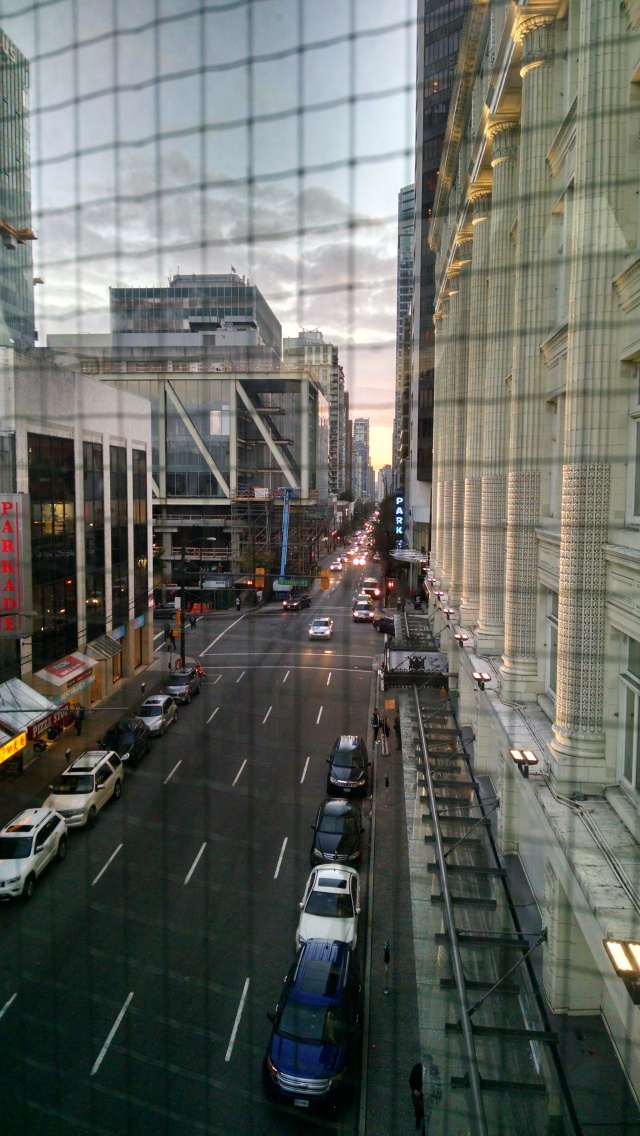 Shopping time. We wander through downtown Vancouver. It is a bustling metropolis. Herds of people scurry about, most with earplugs in and a cell phone surgically attached to their hand, but they are polite and will smile at you, provided they take the time to look up from their phones. A sad drunken man, “sleeps it off” on a street corner, half in the gutter. Glittering high rise apartment buildings tower above us. This is a whole new type of “wilderness”. The purchasing of new attire takes longer than expected,as we don’t really know what size we are anymore. The salespersons are puzzled when we ask if they can cut off the tags, as we will be wearing our recently purchased clothing out of the store. Paul gets a long overdue haircut at a bustling barber shop, and mine will have to wait for another day. Now for dinner. The Cactus Club came highly recommended, so we dine there. We are not disappointed. After dinner, we stroll through the downtown, mesmerized by the glowing neon lights and entertained by street performers hawking their craft. Just before returning to our hotel, we slip in to an “all night” sandwich and custard shop for something sweet. The custard is dreamy, and we decide once back home our ice cream days are over. Not because we won’t be able to afford the calories, but because custard is sooo much better. We reckon if you’re going to have something frozen cold and sweet, better to have a little bit of custard rather than waste your occasional “treat” calories on grocery store ice cream. We waddle back to our hotel, wide awake from the sugar blast, and get our TV fix. 100 channels and nothing to watch. Good to know nothing has really changed in that area. Now for the sugar “crash” and we are out. Zzzzzzzz.

1 Response to Manning Park to Vancouver