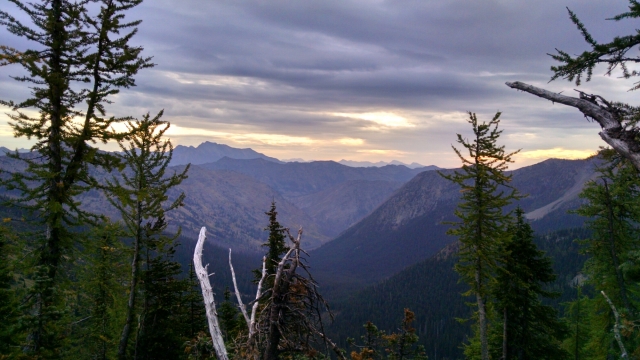 Up early before the sun rises, we are all on the move, which is amazing considering the rudeness of the area’s deer crunching and sniffing around our tents at all hours of the night. The air is brisk and dreaded moisture is in the air. We have several more ridiculous climbs and descents before this trail will let us go. IF we do 25 miles today, we will be set up for a 14 mile finish tomorrow. 25 it is. So much for the “cruisey” miles we had originally planned days earlier.

The barn is calling and the weather looks ominous. Up we climb, so we can drop down to a softly flowing spring. Before we reach the spring, we are ambushed by lightly falling rain. We held out as long as we could, but finally concede and don our pack covers and rain jackets. We decide in protest, NOT to put on our rain pants. We amble along until we come upon a blockade in the trail in the form of a Schoolhouse beer accompanied by an apple and banana which requires a detour of sorts. By now the rain has stopped and the trail forks to the right. We hear a “hootie who” call down the trail. We eye the “Schoolhouse” beer and think, Vicky, really? We wander down the trail and see a man in a red hoodie with Schoolhouse Brewery screened on the front. He asked for our names and Paul responds with his hand out. Shaking hands he knows it’s Larry. Larry, who has returned from a successful hunt and has tracked us down, picking the best possible spot to intercept us. Lots of laughter and more hellos, how are you’s, we can’t believe we hooked up and so on. Larry tells us how he returned home and after talking with Vicky about our plans he headed out that next morning to “hunt” us down. He had crackers, sausage, nuts and ice cold Schoolhouse beer which we enjoy while we update Larry on our journey. We were hoping for a picture of his 4 x4 buck and not one to disappoint, he pulled the horns out of the back of his car.

Jealous, we we listen to the hunting details and remark how impressive his trophy room was. Somewhere in the discussion Larry aquires a trail name and is confirmed as “Hunting Larry” for his ability to hunt deer and hikers. Being only 1030 am we intended to go “easy” on the beer, but what the heck, we knock back a few and convinced other hikers to pack some for later.

We could have sat and talked all day and while it was tempting, we knew we had some big miles ahead.

The trail sign just past where Larry met us

We left Hunting Larry with plans to meet up later this year and walked away giggling, feeling the affects of the 7% alcohol. We couldn’t get over the luck we have had on this journey and once again found ourselves saying, “What are the chances?”. Not long after leaving Hunting Larry we encountered one of what feels like a thousand blow down trees we’ve had to get over, and I get “stuck” on top of the tree.

Not feeling any pain, a laugh attack overwhelms me, and Paul tells me I’m drunk! Which only makes me laugh harder, because he’s not much better off. Fighting an apparent increase in gravity, I slowly slide over and onto the ground. Once again “safely” on my feet we continue to walk happily along. We reach Hart’s Pass and find Brittany, Seeds girlfriend waiting for him to return from the monument. Seeds was on on a thirty mile return trip and was expected to arrive tonight. We told Brittany about our rendezvous with Hunting Larry and before we could finish the story, Hunting Larry drives up.

Brittany scores two beers from Hunting Larry so she can celebrate with Seeds tonight and poses for a picture with us.

Maybe we should have named Larry, Beer Man? We continue our trek as the terrain opens up into colorful rounded hills.

On a steep hillside traverse, we run into Seeds on his way back. We stop and visit. We ask him how it was, and did he get to meet up with the Boys. He said the Boys made it to monument last night, as did he, and they camped together near the monument before they all dispersed. Seeds described it as “bittersweet” and somewhat “emotional” as they had all gotten real close and would now be going their separate ways. Some parts of him are ready for the trail to be over, and other parts of him don’t want it to end. We tell him we understand, as deep down we are experiencing the same thing. It is almost a love/hate relationship we have with the trail. Maybe hate is too strong, more like annoyed. Soon we realize that we both must be our way. We confirm that Seeds has our email and cell number, and reaffirm our invite for he and Brittany to visit, if they are ever in SoCal.

Reluctantly we part and go our separate ways. We are definitely running out of daylight considering the miles we wanted to make. If we (I) really turn the afterburners on we can be to our intended destination what we think will be a reliable seasonal spring, and nearby campsites, by 8pm. Not my first choice, to walk in the dark, but I also want to make it to the Manning Park Lodge at a “reasonable” time tomorrow. Onward we push, why stop now?

With the skies clouding over, it is evident that rain, in the form of a downpour is in the cards. We knew our finish, considering our start, would most likely not be ideal, and we thank you Mother Nature and Mr. Murphy for demonstratively accompanying us every step of this epic journey. It just wouldn’t be the same. To add a “cherry on top”, the spring we had intended to get water from was, for lack of a better term, a swamp, and thus we spent our last night on the trail, “dry camping”, eating our last candy and snacky food, and saving the liter of water we had collected at the raging stream several miles below, “just in case” for tomorrow’s final miles. Under the cover of darkness and with the aid of our headlamps we throw down in a wide meadow as the rain starts to come down. This is not how we had pictured this night over all these miles. Needless to say, I am a little upset. Emotions, and lingering hunger give way to exhaustion as we drift off to the pounding of rain against our tent’s fly. At least it’s not snowing we muse.