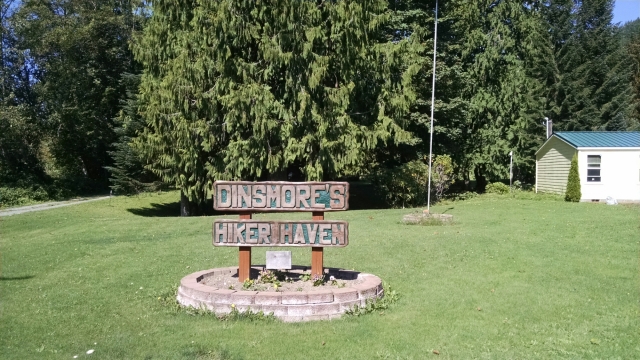 Up early with Ballhawk and Sugar, we start the trek to Steven’s Pass and a hitch to the Dinsmore’s for our resupply box and hopefully our replacement tent body.  By the time we got walking, Sugar was gone like the wind, in pursuit of a rendezvous with her boyfriend.  The trail weaved through the forest and downhill switchbacks. 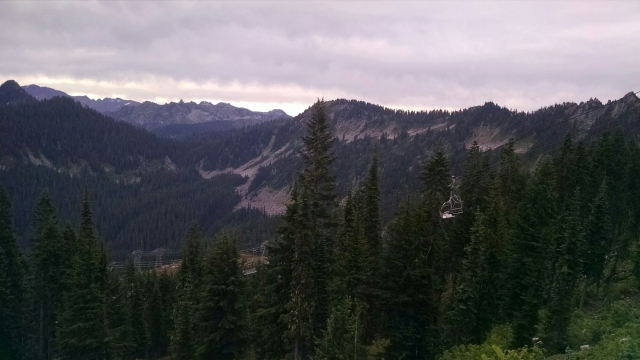 The trail then traversed uphill through a ski area whose runs were being groomed of trees that had become thick and overgrown.  We spoke to one of the maintenance personnel who was part of the crew cutting down the trees.  We asked him what they were up to.  He told us that the area had not been “groomed” in nearly 30 years and the runs had become too “narrow” in some areas so they were cutting down trees, removing limbs, and creating a downhill course.  A cluster of three trees however remained in the middle of the intended downhill course.  We thought this odd.  He explained that they were waiting for “permission”, from apparently the Forest Service, to remove them.  Ironically they didn’t care about the hundreds of trees clear-cut at the bottom of the run. 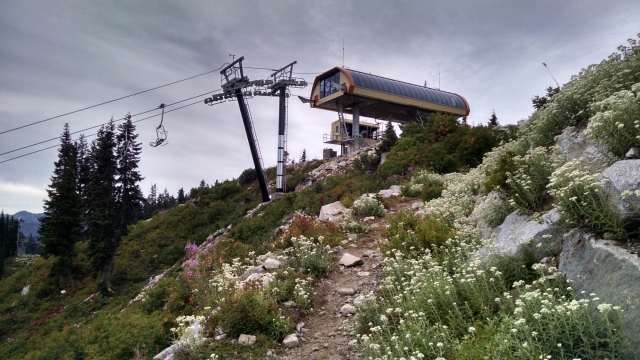 Up and over the ridge and down to the ski lodge and parking lot we continued.  There we spied a familiar vehicle…Coppertone’s!  Root beer float time.  Coppertone had parked at the trailhead that exits into the parking area of the Steven’s Pass ski area.  We decided to cut through the ski area and attempt yet another “direct route”, short cut.  Once again, this was not necessarily a better or shorter route, for when we arrived at Coppertone’s vehicle he told us we had to go back up the hill and exit from the trail…”just kidding”, he said with a smile.  While Coppertone prepared our floats, a woman approached looking bewildered a bit, and asking if this was where the PCT was.  I told her it was, and asked if she was looking for someone in particular.  She said she was just “researching” the PCT, as she and her husband plan to do it once they retire.  We talked for a while about the trail, equipment and resupply strategies.  I did my best to yogi a ride from her to the Dinsmore’s, to no avail.  I didn’t think I smelled that bad.  Oh well, nothing a root beer float can’t fix.  Next stop, the side of the road and a hitch.  There is a sign that instructs you not to cross the freeway but to use the pedestrian overpass, which most hikers ignore.  In keeping with “good karma” points, we used the overpass and started to hitch.  Cars zoomed by at over 70 mph.  This was going to be tough. Within less than 10 minutes a van arrived, dropping off other hikers and asked us if we needed a ride to the Dinsmore’s.  Excellent!  We hollered over to Ballhawk and Socks, that we had a ride and there was enough room to take them as well, so we all clambered into the van. Bill, our driver, was a regular trail angel who was familiar with where we needed to go.  He was also a wealth if information about the history of the area.  He told us about the trains and tunnels that had been blasted through the mountains.  He assured us that the “clouds” that were billowing into the pass was only marine air fog from Pugent Sound…nothing to worry about as far as precipitation goes.  He dropped Ballhawk at the Skykomish post office.  We were headed another 15 miles down the road to Baring where the Dinsmore’s Hiker Haven was.  Before exiting across the bridge from the rail town Skykomish, we spied Sugar walking down the sidewalk with her pack.  I asked Bill to stop, so we could ask her if she ever met up with her boyfriend.  “No” she replied exasperated, “it’s a long story”.  As it turns out she also now needed a ride to the Dinsmore’s.  In, she climbed as well, into what was quickly becoming a clown car, and smelly one at that.  Once in, she told her sad story. When she arrived at Steven’s Pass her boyfriend was just leaving with a tow truck.  His car had died overnight and needed to be repaired. A ten minute encounter and he was gone. He planned to meet her Hiker Haven before the days end. As we were all hungry, a stop at the Baring country store and diner was deemed necessary before the walk across the street and railroad tracks to Hiker Haven.  While inside, we found Oozzle, Thistle, Seeds and his girlfriend Brittany.  We sat with Seeds and Brittany and caught up a bit.  Seeds, being full by now, gave me the rest of his unfinished chocolate shake of which I sucked down in addition to a hearty breakfast.  In a few short weeks, none of this type of ridiculous caloric intake will be appropriate and/or necessary.

Once fully satiated, we hobbled over to Hiker Haven.  What a place.  It’s run with absolute precision.  A mail room; a wash room compete with shampoo, soap and towels; a laundry room with an assortment of fresh and clean clothes to change into while washing your clothes; an enormous clothes line to air out ones sleeping bag or dry ones tent; WiFi (albeit not that strong); and a hiker “lounge” complete with an assortment of classic VHS movies. 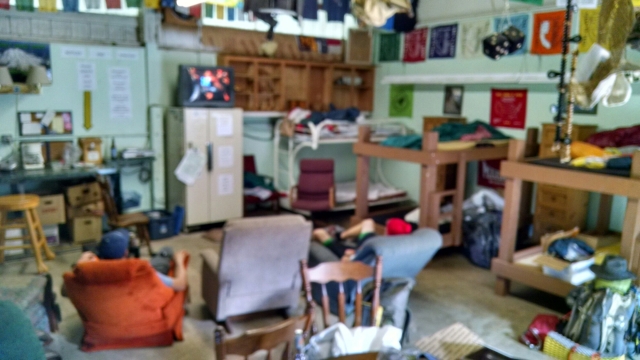 A particularly bad 007 movie was just finishing. Later, Prospector dropped in Teenage Mutant Ninja Turtles.  All the boys (22-27 yrs old) talked about what turtle they were as kids and the crush they had on the female reporter.  Had to laugh, as my son was a Ninja Turtle nearly 24/7 when that film came out.  We discussed whether we would spend ue night or try and get back on the trail for a few miles, as this next section was supposed to be the hardest Washington section and 104 miles.  We decided that if we got all our chores done before 4pm it would be worthwhile to get at least 4 mikes in to make it an even 100 miles and thus five 20 mile days…we had the food.  Here we also booked our flight home for September 22nd.  That would give us a buffer of a couple days to make it to the monument, Manning Park and then Vancouver.  We figured we’d finish somewhere between the 18th and 20th.  While we were not able to book via WiFi, we were able to get ahold of our son and he booked the flight for us.  Success!  Everything done…plenty of time to get some miles in.  Off to the country store, a to-go sandwich and a hitch back to Steven’s Pass.  As luck would have it, Bill was just passing the store on his way to the laundromat.  “You going back so soon?” he asks. Yep, I reply.  “You want a ride?” he asks.  Why of course, and can my friends come too?  We all clamber into his van. 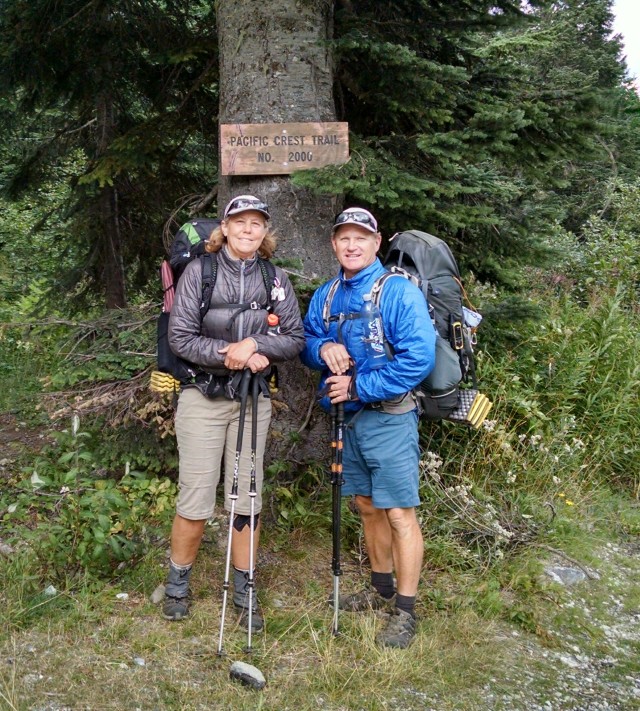 He drops us off unceremoniously and we begin the second to last leg of our epic journey.  We feel giddy and like horses ready for the barn.  Holy crap, we’re almost done.  We hope the weather will hold for us as we know its no longer summer up here as the leaves have already started to change and its only a matter if time before Mother Nature REALLY turns on us.  Keep calm and hike on we say.