Having completely full bellies, we slept soundly, so much so that we kind of over slept.  We were glad we found last night’s campsite when we did as there were no possible camp spots for quite awhile, to include the Many Lakes View Point, where we had originally wanted to get to and camp last night.  At the “View Point”, not only were there no places to camp, but there was no view.  The trees were too tall and thick, which obscured any chance for a view.  Maybe that’s why the sign was on the ground.  We walked by several small and pristine lakes enroute to check out Olallie Lake.

Cigar Lake was one of our favorites.  When we got to Olallie we were amazed.  It was worth the side trip.
lake is awesome. 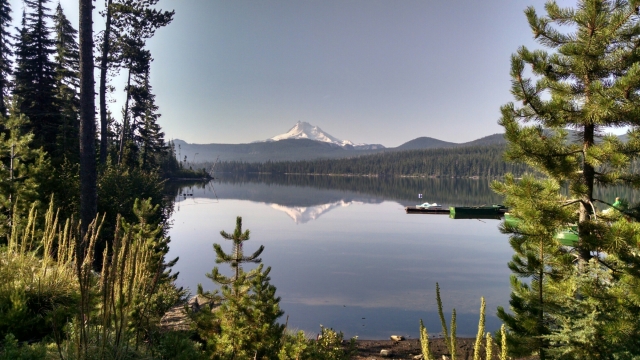 It had quaint green rowboats, lakeside cabins, a fully stocked store, and a stellar view of Mt. Jefferson.  This lake is stocked with some trophy sized trout and does not allow any motorized vessels or human contact.  We ducked into the store for a danish and a fresh cup of coffee.  As we sat on the front porch of the store soaking in the view and sipping our coffee a couple and their three legged dog walked up.  They were on a backpacking trip and headed to Cigar Lake, and were at the store on a “beer run”.  We couldn’t help but semi-stare at them, as their packs were quite full, the dog was missing a front leg, both were smoking and the female was wearing Jack Purcell tennis shoes, and drinking from a large plastic coffee cup.  As soon as they dropped their packs, exasperated, they both lit up cigarettes.  They asked us if we were backpacking too.  We said we were.  We asked them where they were headed. The female said they were on their way to Cigar Lake (about 4 miles away).  ” This is like our back yard.  We love this shit”, she said, taking a drag from her cigarette.  “How ’bout you? Where are  guys headed?”. Paul couldn’t resist, “Canada” he replied.  “Wow”, they said.  We finished our coffee, filled our water bottles and headed back to the trail.  From here the trail was fairly easy.  It was mostly forested with some small thin meadows in between. 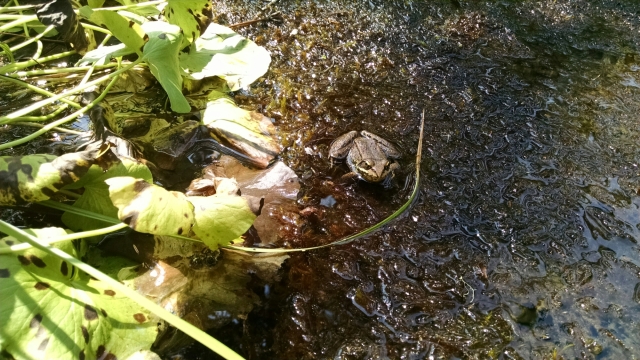 As it was warm we had to make a stop for water at Trooper Spring.  The water was clear, icy cold and was in a pool filled with frogs. Yum!  The rest of the day continued through forest, some green, some recently burned, and some logged.

We crossed a wooden foot bridge at Warm Springs creek and bedded down for the night.