Well…the wind did NOT die down, but changed direction and began gusting stronger sometime while we slept.  Our water bottles that had been left outside were frozen.  This is summer?  We pull everything inside the tent and have enough water that is not frozen to make hot coffee. We eat our last morsel of food…Paul has oatmeal, I have a ProMeal bar.

We put on all available layers of clothing, pack our packs as best we can before exiting the tent for it’s breakdown…in the gusting wind. Our temperature gauge reads 34 degrees.  With wind chill, we reckon it’s in the high teens or low 20’s.  Yippee!  By the time we start walking we are cold to our core.  Luckily our fingers are locked (frozen) in place around the handles of our trekking poles.  Onward, and not surprisingly, up we climb…vitamin time. 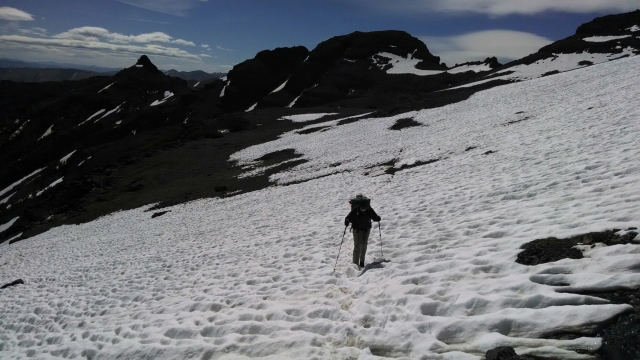 Apparently we are not done with the snow. Crap! I am really beginning to NOT like snow.  We are motivated by the cold and the promise of food and a hot jacuzzi dangles like a juicy carrot in front of our heads.  The climbing stops and the descent begins.  The only difference in the composition of the trail is its orientation to the sky…down.  When we make it to Hwy 108 we have no cell service and barely enough power to the Delorme to message Terry that we’re here, as he, we later find out has been detained by the military that are running “mountain war games” in the area.  This would explain the big black helicopters we’ve been seeing flying overhead the last two days.  When he arrives, he comes bearing gifts of enormous sandwiches, bags of chips and beer.  Does he know us, or what?  We decide to lunch at Kennedy Meadows north, just to see the place.  Once sufficiently nourished, down the pass we drive, not before Terry places blankets and towels on his cloth seats so as to protect them from acquiring our stench.  Terry has secured a two bedroom apartment of sorts for the next two nights.  We decide to multitask in order maximize our time Terry.  While laundry was soaking in the washing machine, we were soaking in the jacuzzi catching up with our friend.  Once both us and our laundry were sufficiently clean we made plans for dinner at Virginia’s, as their pizza came highly recommended.  The recommendation proved correct.  Then back to the apartment for an early night.

We slept the morning away rising at 730, two hours later than our normal rising time.  We walked with Terry to the breakfast buffet and then toured Bridgeport on foot…it took 10 minutes.  Paul and I made appointments with the local (only) salon, Paul for a haircut and me for a little color to hide the grey (more like white) that all those darn passes caused.  Back at the apartment we went through the box of supplies Terry had picked up from our son who had collected the items we had requested from home…which included our passport cards that we had forgotten.  Once that was done, I furiously worked to catch up on our blog as Terry brought us up to date on all the happenings at home, and the world, whilst we’ve been frolicking in the outdoors.  Seems not much has changed, as the political theater continues, and people across the world continue to fight over really stupid things.  Once we were all gussied up, we completed our resupply shopping at the local market, that also included dinner for the night…a BBQ of New York cut steaks with baked potato, beans and corn.  Finally, fresh food, and even better company.  We talked till we couldn’t keep our eyes open and finally turned in for the night, knowing that we would awake to pack and set back out on the trail the next morning.