I’ll start by saying this was a very tough day. We started the day walking away from summiting Mt. Whitney. Even though we had decided to not summit last night it was difficult to hike the PCT trail going away from the Whitney Spur trail. The other hikers camped near by all left earlier with all the excitement of a new adventure. Cheering each other on as they hurried up the trail saying good bye to us. We turned our focus on our adventure, Forrester Pass. All 13,500 feet.  We had about 13 miles to go to get there. The sun was out, the sky was that royal Sierra blue, and honestly the birds were singing. Our attitude could have been measured by the “spring” in our step. We hiked through tall pines and past wide open meadows.  We saw two deer feeding and couldn’t resist checking to see if they were bucks. They were! A small forked horn and a nice 3×3 or possible 4×4, hard to say with out some binos to see better. When they walked away the larger buck’s antlers were well outside his ears, still in velvet. It seemed like a movie. A picture perfect setting,  with the wildlife you would expect, on a beautiful day. Life is awesome! 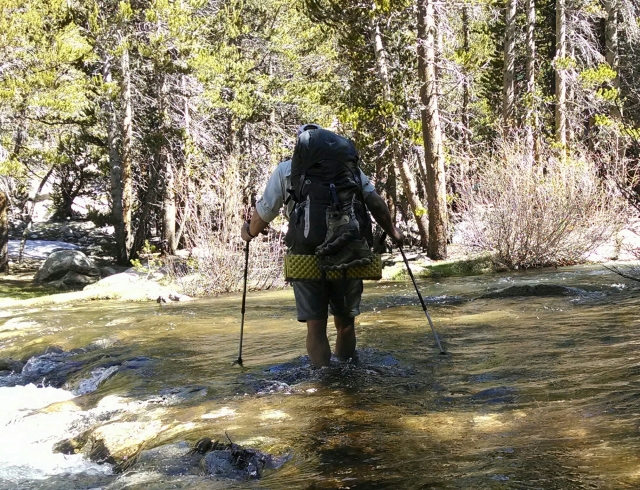 We ford more icy creeks and lunch on the bank of Tyndall Creek. It’s here that we met a couple, our age, section hiking, eating lunch too. We get the usual questions about the trail and then the question, “When are you going to climb Forrester Pass?”  We say today. They respond “Today?” That should have been a bigger clue , especially after they had earlier mentioned they’ve climbed the pass on a earlier hike. We have what Ten Speed later referred to as”Thru Hiker Tunnel Vision”. This means we push on, defying common sense. 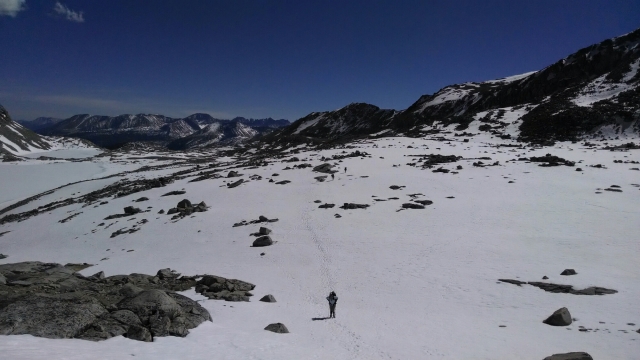 We head out, only 4 miles to the top of the pass and it’s 1:30 in the afternoon. The trail heads towards amazing mountain peaks, forming an incredible bowl. We start questioning the location of the pass.

It could be anywhere. We stop several times and make guesses. I remind Paul “We can wonder all we want, or we can wander and find out.’ He rolls his eyes, having heard this a thousand times. We push on as the trail turns to foot prints in deep snow…another clue.  We “posthole” for the first time and laugh, yet continue following foot prints not knowing where the trail is actually located.  From time to time we can see the trail in the open spaces clear of snow, but the trail winds around large boulders in every direction who knows where we’re going. As we close in on the face of this gigantic bowl, we see the pass.  It’s way the hell up there and it has a very, very, slim chute.  Several long steep switchbacks are now visible. Some covered in snow, but all look intimidating. Between us and the switchbacks is snow and boulders sloping up the mountain.  We posthole about calf deep over and over, and then decide to take the boulder route. Climbing over boulders focusing on the switchbacks thinking, we “got this.”  Tunnel vision anyone? This isn’t “that bad” we say, taking no thought of what lie ahead on the other side…how bad can it be, right?

Surprisingly enough as we look behind us a quarter mile, we see the other couple following the “blind”. I posthole 30 feet before the switchbacks and Paul carries my pack up to the trail, as I scramble up to higher ground. Whew!  Now it will get easier we think and walk the switchbacks as if having successfully won at some game.

The switchbacks are steep and you gain altitude quickly.  Before you know it, the valley floor is far below and the edge of the crumbly trail, is straight down. ‘Don’t look down’, I tell myself… focus on the trail.  The other couple is just below us and shouts, “having fun yet?”  ‘Of course’, we reply.  We continue climbing and reach the “snow bridge”connecting both sides of the chute. Up to this point the height issues were livable but this looked real scary (more like terrifying) and A LOT crazy!  I can’t believe I signed up for this.  Paul is giddy and thinks it’s the coolest thing ever.

Paul goes first and says it’s “easy”, “you can do it”, and I do…mainly cause I really have no choice.

I make it, but don’t look down, however I post holed once toward the last few steps and nearly have a coronary…woe!”) Up the other side of the chute to the elevation sign. We made it! It’s 5pm.  Pictures are in order.

It is then that we see, looming over the back side it’s all snow, for at least two miles (of course). 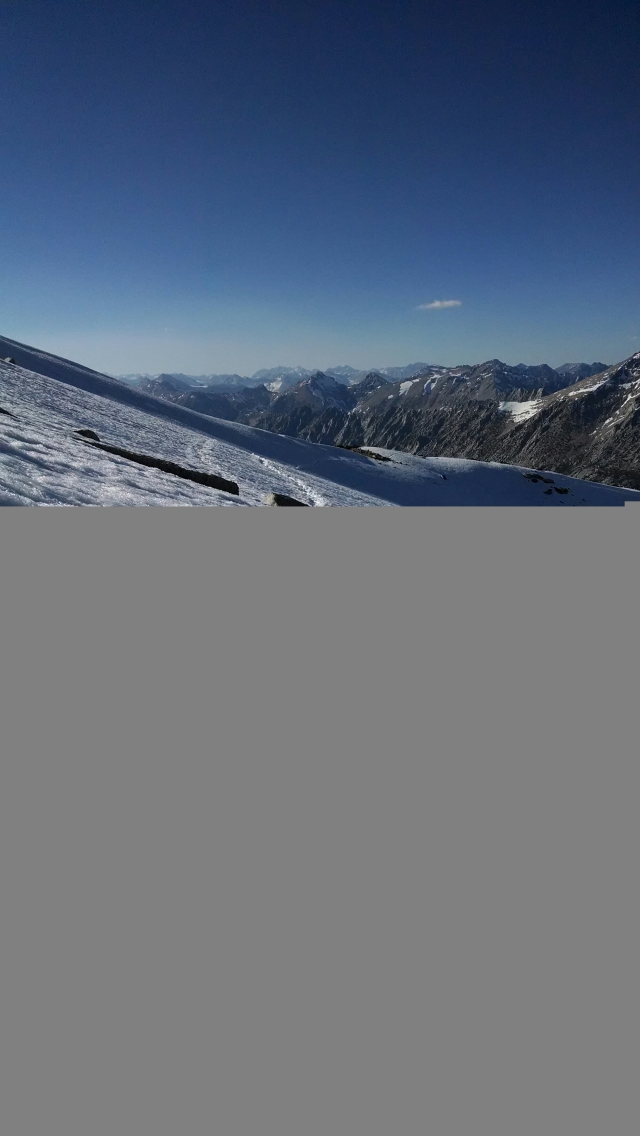 We then boot ski a bit.  All along we are thinking no big deal, plenty of day light and at least it’s down hill. Well, things got worse as the post holing became more frequent as we plunged downhill. We could see the lower elevation that had little snow and where the tree line began. That was the goal, the camp site, and safety.

Looking back from where we came

Behind us was the other couple having the same troubles. We pushed on. There was no other choice. I was looking for a closer camp site knowing it didn’t exist but out feet were now wet and cold. We were both complaining about the conditions and walking, potholing, climbing to our feet again.  It was exhausting. At one point I fell so deep it swallowed my whole leg.  Shit. Now what?  I undo my pack and take it off to make it easier to climb out of the bind I’m in and to use it to disperse my weight.  I shove the pack in front of me and pull myself along.  Finally to safety…a portion of the trail that is not covered in deep snow.  Meanwhile Paul has doubled back to make sure I get out of my hole and helps me with my pack.  I think how does one do this by themselves… this is flipping Dangerous!  We pick our route once again, and hear what sounds like a waterfall or roaring river.  Where is it?  We look around and then realize that its directly below us!  Paul takes a step. Down goes his foot through the snow and water starts to pour into his boot.  Shit.  People die because of this crap.  Paul is able to extricate himself without any complications.

I say ‘screw it’ and decide to lower my center of gravity, sit down and start to slide on my butt (aka. Glissade) the rest of the way down.  This works perfectly, as I get down quicker and don’t have to worry about messing up my knee any further or breaking a leg or foot because it’s gotten wedged under a boulder… again.  I am however sopping wet and practically frozen as is Paul.  We are thinking survival mode now.  Early signs of hypothermia is setting in. Paul can’t feel his hands or feet and I basically can’t feel my hands and lower half of my body, in fact I am almost not cold…bad sign. Paul finds a flat area in a small stand of pines.  By the time I get to him he has created a fire ring and has collected a stack of wood.  Fire! Good thinking and even better planning on his part as he has been carrying (since the border) a small container of lighter fluid and tissue… Just in case.  This is a just in case situation.  He lights the fire and removes his saturated boots, replacing them with dry socks and his Croc camp shoes, and begins to rewarm his feet.  I quickly strip down out of my wet clothes and put on my dry sleeping clothes…complete with Western Mountaineering down puffy pants (and to think I almost sent those home) and begin to warm myself by the fire. The last we saw the other couple they were heading for higher ground and appeared fine. The fire was ” glorious”  I said over and over to Paul who was warm again. Now we needed a hot meal.  Paul went to the snow creek to fill the water bottles. While there, out of the darkness someone calls to him,  “Are you the guy with the fire?” Paul answers yes and invites the hiker to the fire to get warm. The hiker and his partner arrive shivering and stuttering as they had just experienced the same hideous descent.  Their names were Brett and Ten Speed. Ten Speed is a Triple Crowner and is doing the PCT for the forth time. They thank us several times for sharing the fire and we invite them to stay the night. They accepted immediately! 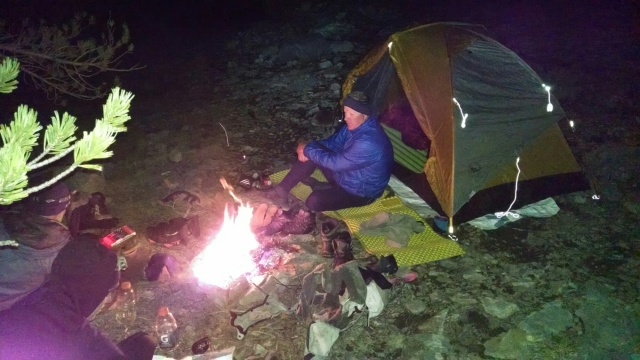 We stayed up well past hiker midnight telling stories, comparing our hike, and drying our shoes and socks. We were warm and the fire was glorious!! Oh ya…already said that.  Once sufficiently warm we crawled into our tent and slept comfortably thanking God above for keeping us from harm, knowing things could have been worse and gone astronomically wrong at any point.  But as Arizona says, “It’s not an adventure if there isn’t some risk, right?”