This morning was not as cold as the previous one.  We are able to get moving fairly quickly and are walking before 7am.  We had done the math of miles and meals and now realize we have shorter ourselves by at least one meal, if not two…especially if we are to attempt to summit Whitney.  This however is in somewhat limbo as once I hit 10651 ft (actually about 100 ft before that) my head starts to pound.  I will admit I am a little worried about even getting to Crabtree meadow which is well over 11000 ft and making Forrester Pass at over 12000ft.  Hopefully the altitude medication and proper hydration will kick in fully and spare me the sickness.  I have never been good at higher altitudes.  We see very little snow as it appears has melted as quickly as it came. 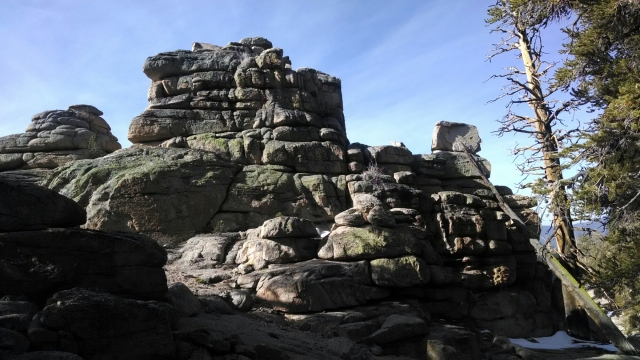 We walk on decomposed granite and through tall boulder fields stacked precariously as if a young giant had done so with a “primitive” set of Legos.  Boulder fields turn to forest void of undergrowth, yet strewn with blow downs in varying degrees of decay.

We remark how the combination of random boulders interspersed amongst the blow downs with live and younger trees towering beside them and the still and quiet of the air makes us feel like we are traversing a graveyard of sorts… the boulders being the headstones and the hovering trees visiting family members.  The climb in elevation is gradual, but enough to feel it.

We spy the Owens Valley and Hwy 395 at one point, and now know what the hell is up here as we had often wondered many a time driving the 395 to Mammoth to ski.

We stop at Diaz meadow creek (mile 741) for water and lunch and reconfirm which trail we will take to Horseshoe Meadow for a hitch into Lone Pine.  We decide on the Horseshoe Meadow/Mulkey Meadow trail as it’s only 2.9 miles and thus makes it an 18+ mile day and early enough to the road for a better chance at a hitch.  Once we start down the trail to Horseshoe Meadow we see three thru hikers we recognize from KM that had left a day or so ahead of us. They are coming back from Lone Pine and a resupply and are cagey about their snow experience, saying it wasn’t “that bad”, however their faces tell another story.  One says that everyone but Mammoth went into town…but then Mammoth is crazy and tough as nails.  We remarked that he probably asked, “When’s the weather gonna hit?”…in the thick of it.  The three agreed.  When we got to the bottom and were walking across the meadow floor we saw Indy and Art Gypsy.  They told us the real story, about the whiteout conditions, hunkering down for two days next to a raging fire with several other hikers and then taking the first exit out and into town for more food.  In classic form, Art Gypsy (who is a photographer by trade) smiles brightly, “But I got some great photos!”.  They give us the lowdown on getting to town and where to stay.  We wish them safe travels and make our way to the road.  We are prepared to spend the night at the campground, if we must, and try and yogi a ride out of there, but are happily surprised within about 20 minutes by a truck with three backpackers from Big Bear returning from a short trip and heading into town for dinner.

Paul with Jones, Treble, and Tron

They offer a ride of which we graciously accept.  The ride down the mountain was spectacular.  The conversation turned to thru hiking, trail names, what we carry, how we resupply, average miles and some of our ” adventures “.  They dropped us off at the hostel where we saw other hikers we recognized from KM, and believe it or not , Altas from the Why Not gang.  He had just got into town as he had to take some time off to attend his girlfriend’s college PHD graduation/ceremony.  We decided to have dinner together at the Pizza Factory and catch up.  Barrel joined us for dinner as well.  Barrel was the one sleeping next to the water cache at mile 630…Bird Spring Road when we got it at 2am.  Barrel went through the thick of the storm only making 24 miles in three days as the snow was mostly thigh deep.  He was surprised his feet did not get frostbitten.  He said at one point when he was setting up his tent and his shoes were so wet and frozen he took them off and walked around in just his socks as couldn’t feel his feet anyways.  He would heat his food and place it between his feet to warm them.  We were to late be able to do laundry, but also ran into Cheetah, Dirt Monger and Bear Claw.  Dirt Monger and Bear Claw are super fast and Ultra light hikers.  They said they made it to Cottonwood Pass and then down into Lone Pine for resupply having only been subjected to sleeting rain.  Paul was able to replace is torn shirt and pants as an outfitter called Elevation (they give thru hikers 10% off) and I purchased some compression sleeves for my lower legs to combat shin splints.  We would have passed out asleep earlier, but as luck would have it, the killer deal we got at the Dom Villa historical hotel, came with another price…super drunk, loud off key signing,  poker playing (outside near our room door) well into the night Motorcycle Club.