We got up at 5am to “beat” the heat for our trek to the Deep Creek Hot Springs.  Luckily we did because it was hot, downhill and little available shade when needed most.  Out of the treeline we weaved following Holcomb Creek. 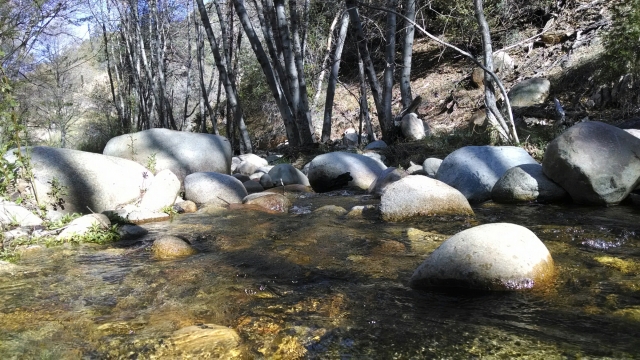 The trail wasn’t too particularly difficult, just hot and gnatty (stupid flies in you face most of the day…made me unpleasant).  Bright desert flowers made up for the gnats though. 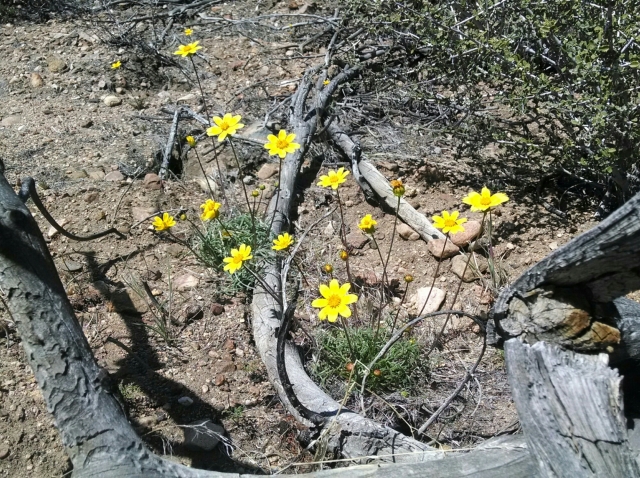 The first 10 miles ended with a much needed break and a good soak of the feet and legs in Deep Creek.

The water was icy joint aching cold but refreshing.  The Russians (aka..”Comrades”) swam in the freezing water for quite some time. Apparently it wasn’t cold enough for them as previously they had shown us video of them swimming in ice laden lakes back in Russia.  With another 10 miles to go in the heat of the day we cameled up and loaded up on water before heading back out.

We ran into the Temple family who were out on a hike showing their friends from Australia the sights. 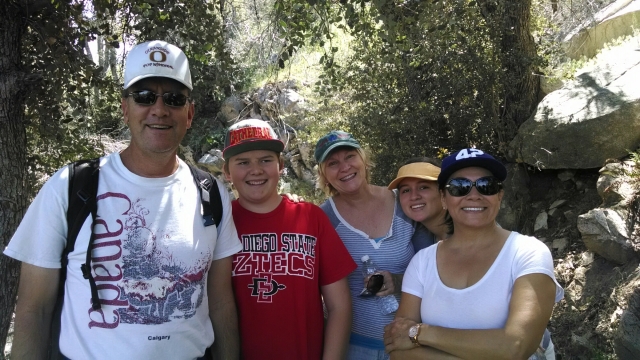 They were curious how far we had come backpacking and where we were headed. We talked about our journey and the PCT. They took our picture, and we took theirs and gave them a card so they could follow us on our adventure.  The rest of the way to Deep Creek Hot Springs was awe inspiring.

Imagine what this place would be like with LOTS of water.  We never knew such a place existed in our own backyard so to speak.

Walking along a narrow path with steep drops directly below to a hearty flowing river strewn with large boulders and deep and inviting pools of water with an occasional snake crossing your path and/or lizard playing “chicken” under your feet made for an exhilarating trek. 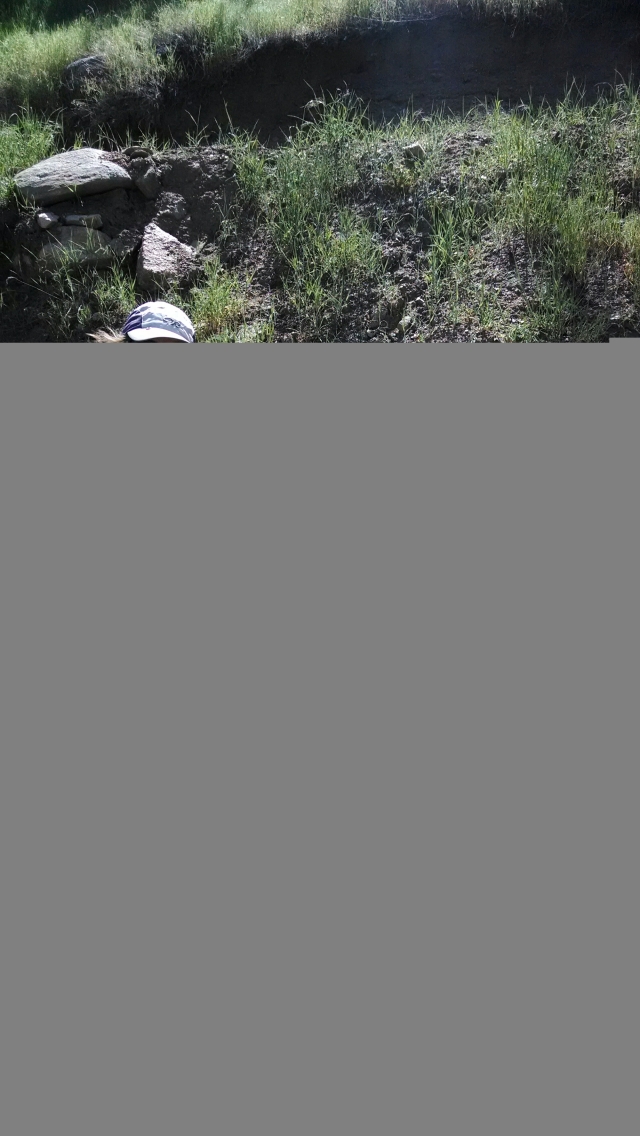 We also passed the 300 mile mark as well.  As we were nearing our final destination, we engaged in a Mexican standoff (this is when nobody gives in) with a meaty rattler.  He was not about to let us go forward… and we (especially me) weren’t going anywhere with the fang end of that reptile facing the trail.  When we felt sure he wasn’t going to strike…that he was just posturing, we “snuck” by taking as wide a route we could without walking into another snake.  At least we were awake now for the last 2 miles. 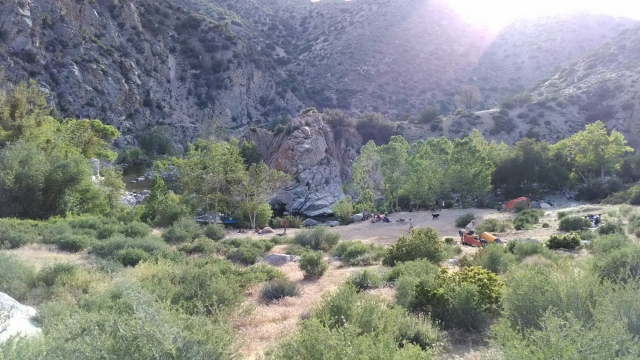 When we pulled into the Deep Creek Hot Springs , most (actually all… we’re slow compared to the rest of them, or rather I’m slow) of the other PCT hikers we had seen at mile 10 were already there taking in the sights and set up.  The place was “zooish” and Trail 6ish (a place were Naturist would gather in a place I last worked).  While it has piping hot pools with  chilly creek, there are things there you just can’t unsee.  There is a reason one should adorn themselves in cloth or even hides…some have more reason than others. Take for example the naked fat man who tromped through our campsite late in the evening wearing a headlamp, hiking boots and a backpack.  Pretty sure he wasn’t a PCT thru-hiker.  We did however score with an early evening warm bath.  It was nice to wash away some of the grime. 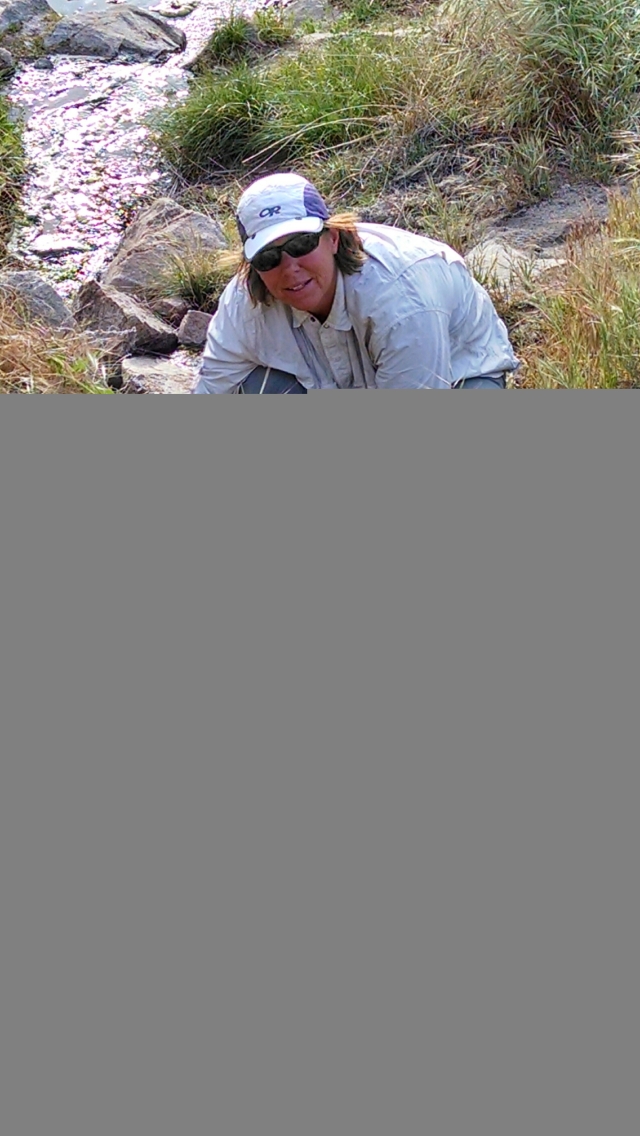 As the creek water was a little questionable considering some of the probable “activities” that were taking place upstream, we, along with the other thru-hikers opted to replenish our water via a spring feed tributary running directly into the main body of water.  It was almost scalding hot…say at least 104 degrees, but it was worth it to have “safe” drinking water (we still filtered it), as the creek water in the area had been closed down the year before due to cholera… Yikes. 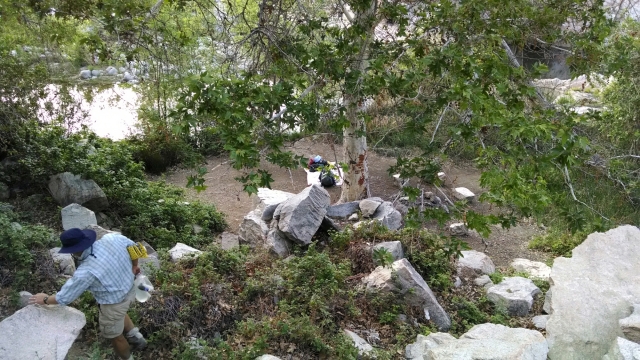 We scored an awesome campsite away from the "masses"

Even though we had an “out of the way” campsite, the night didn’t quiet down till at least 2am as some loud late night “locals” came in with over laden backpacks and headlamps thinking they would have he place all to themselves…Wrong!  Too bad for them when all us thru-hikers got up at 5 to get a move on.

4 Responses to Beating the heat…?